Stalwart Defenders Against the Bitter North

The city of Greinstock also known as the Western Aegis is a settlement built on the backs of harsh struggle and ever present danger. To the south waits Farlos'Dal the last great enchanted wood rife with savage beasts both magical or otherwise as deadly as it is bewitching. Watched over by the Primal Order a secretive collective of wardens and druids who are known for being just as vicious as the beasts and land that they protect. Eastward holds the Battern Foothills, a precursor to the Northern most edge of the Sundercleft Mountain range, a realm from which few venture and fewer still return. To the North and West waits the Sea of Fate home to leagues of rarely seen, but often whispered of leviathans. With every direction baring danger and threat it is no wonder that those who call Greinstock their home are a hardy and often mistrusting lot.   Currently under the ever watchful eye of Lady Artress Larbrook, Greinstock has taken what most consider to be a more open approach to the outside world. For the first time in nearly sixty years the Sea Reaver fleets see use for more than their intended purpose of battle. Now sailing southward to Kelrin, the seat of power for the Lord of Lanterns, in hopes to strengthen bonds of fellowship and bolster both great city's power within the realm. For while Greinstock may lack the fanciful art of its southern sibling the harsh Northern lands are rich with many a rare treasure to wet the apatite of a Southlander. In recent months there has been a growing rumor that even Dala'ros Lorethin, the Southern most tip of Lorian has sent ambassadors presumably on a good will mission to ease the long bitter feud between the morally and socially opposed lands. 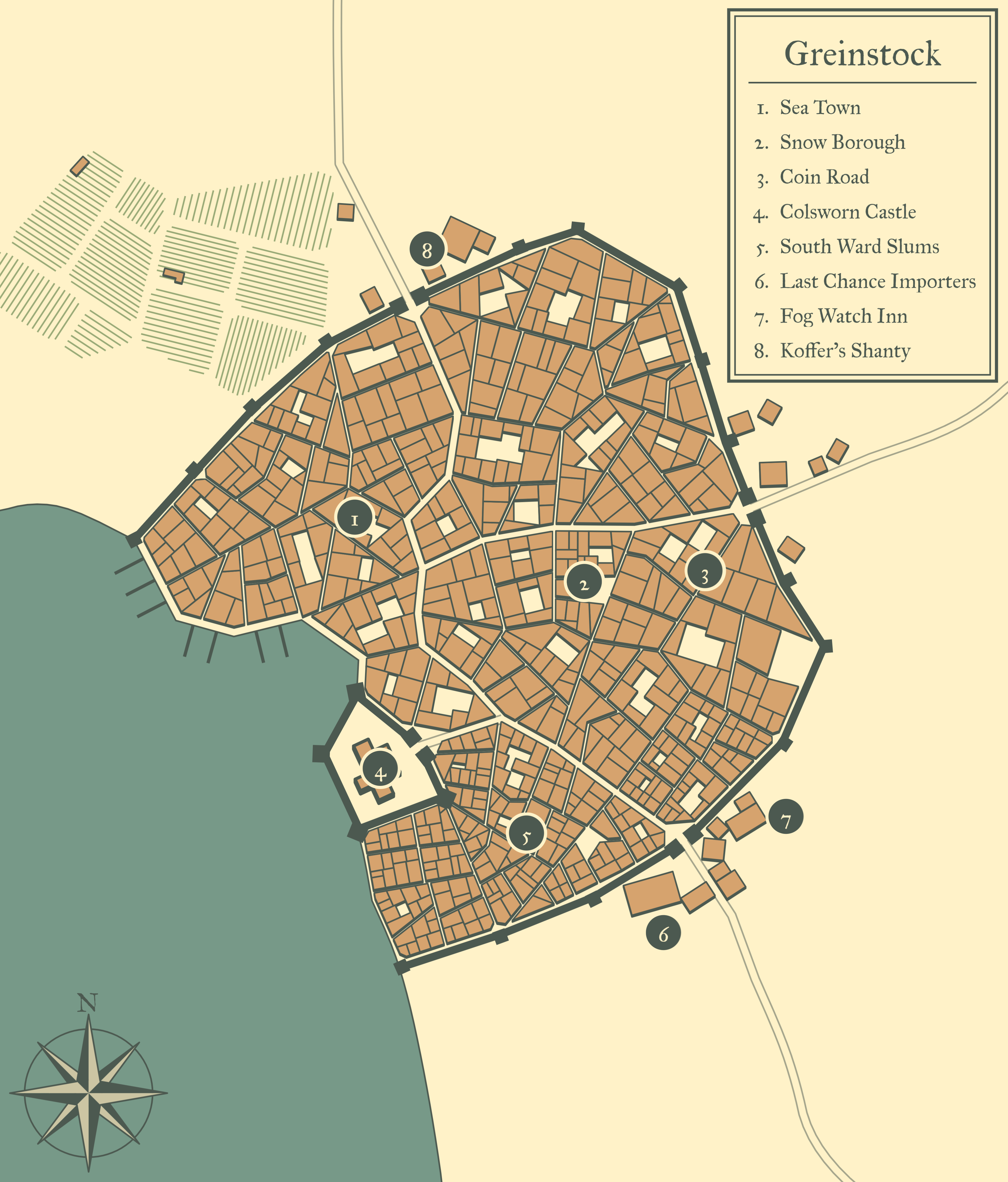 By far the largest section of Greinstock, Sea Town is home to the majority of the city's fishermen, sailors, and soldiers. Spanning from the docks all the way across to the eastern wall of the city it lays claim to nearly half of Greinstock's inner wards.

The very heart of Greinstock and considered one of the most secure locations within all of the city. The safety of Snow Borough comes with a tragic cost as this is where the majority of the orphaned, maimed, and widowed citizens of Greinstock make their home until they are fit to rejoin the hardships of the world. Many lives are lost in the Bitter North and Greinstock takes care of their own.

The Middle most eastern district of Greinstock, the Coin Road is what passes for a merchant's quarter this far North. Complete with a small market square and a staggering amount of weapon and armor merchants along with a number of other grizzled travelers who trade in more unsettling things, if it's meant for blood shed then it can most likely be found on the Coin Road. Though at what price is always the question.

The seat of power within Greinstock origionally built and owned by Karlas Colsworn in the Age of Ascension it was left battered and abandonded by the start of the age. Over one hundred years ago the keep was redicovered and rebuilt by a league of deadly pirates and with its rebirth Greinstock was founded. Currently under the stewardship of Lady Artress Larbrook, the latest in a line of nearly a dozen would be nobles. Having held the seat for nearly sixty years Lady Larbrook has ushered in a new era of good will for the people of Greinstock, at last cementing what was once a legion of disloyal cutthroats into one of the most respected military powers in all of Lorian.

While Snow Borough tends to those that are yet unable to fend for themselves the Southward Slums is home to those who have lost even the faith of the Aegis. Left in squalor there gangs, pirates, and all manner of other chaotic elements vie for powers within the lowest point in all the realm. Why? But for the simple chance to be recodnized as the 'Slum Keeper' a title on par with knighthood or lordship in terms of respect in Greinstock. The current Slum Keeper is known only as 'Marek', a being who rose to power within the last year, but who has somehow managed to keep all but their name and title secreted away.

The first currier organization ever given the privilege to put down claim on Greinstock soil. Known for their swift, if questionable, delivery many say Greinstock would not be enjoying this recent boom of commerce if not for the secretes of the Last Chance Importers allowing for supplies to somehow get through the enchanted woodlands to the South.

Many an adventurer knows the name of the Fog Watch Inn if only due to it's impressive ability to somehow exist and openly operate without the protections of the high walls that guard the inner wards of Greinstock.

Also known as the 'last of the shanty towns' Koffer's Shanty is what remains of the original pirate lean-tos and repurposed ships that once populated the architecture of Greinstock. Now said to be haunted by the souls of sailors damned to die on land few venture there and even fewer still call the ruin home.
Type
City