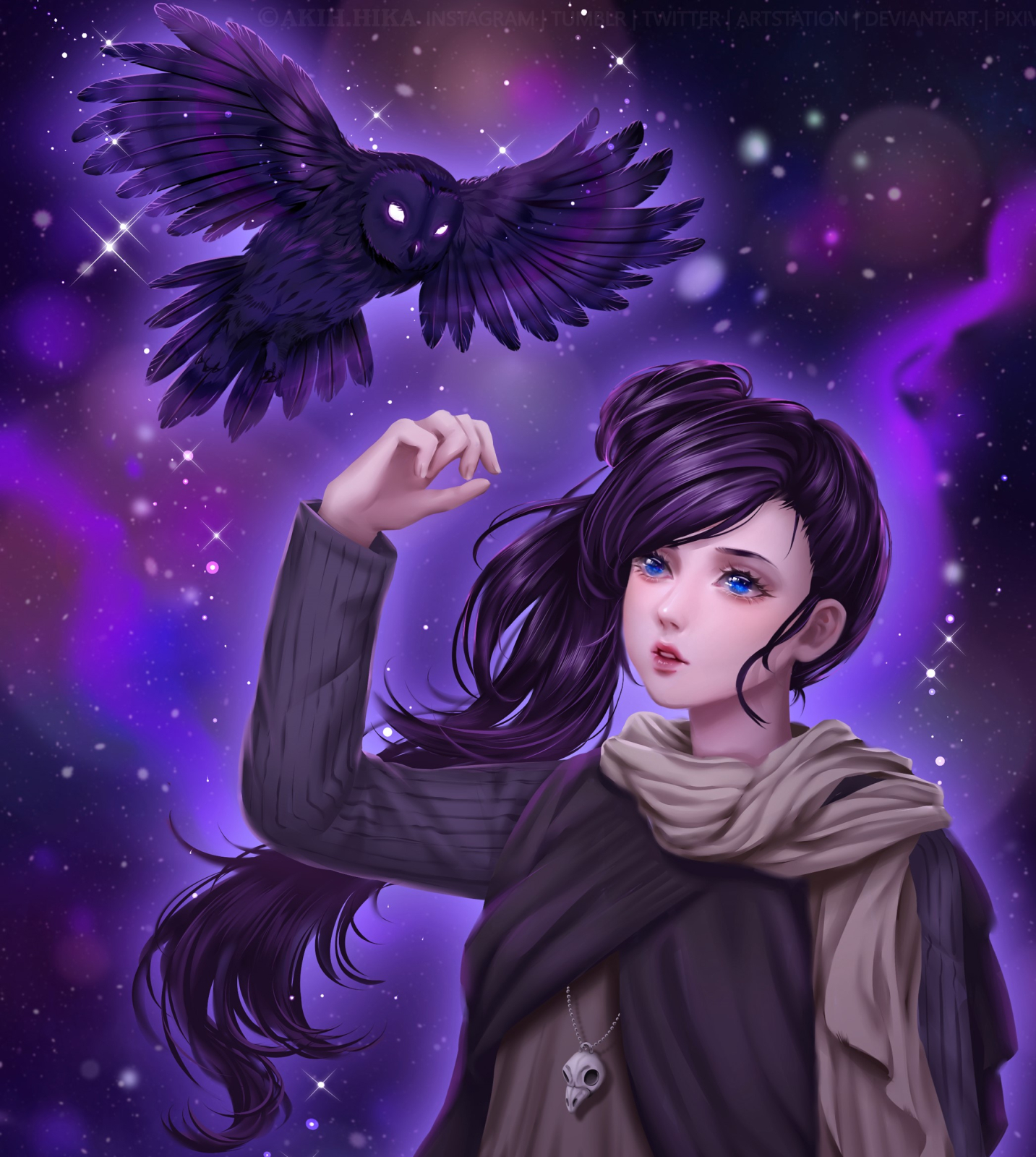 I’ve lost almost everyone I know and love. I’m not losing you too.
Seori Nightbringer

Although born in a well-off family, Seori Nightbringer suffered a turbulent childhood when she lost them to the Ithicans. Taking pity upon her, her aunt, known as the Chieftess of the Nightbringer Clan at that time, took her in. Despite the emotional trauma from the loss of her family, Seori otherwise led a comfortable life under her aunt's wing. She also met and befriended her twin cousins Ains and Rudi during that period, seeing her little brother's likeness in them. The death of her aunt in battle, however, disrupted her simple life. Seori subsequently took up the mantle of chieftess — a burden that forced her to grow up all too quickly at the tender age of fifteen. Any semblance of her peaceful youth further vanished when Agatha Eridan, the Empress of Ithica, conquered Volana and murdered the majority of her extended family. As chieftess, Seori seeks to reclaim her and her people's homeland by assisting Ains in his quest to the throne, but her cousin went missing two years ago for reasons unknown. Afraid to lose her only family, she desperately seeks to uncover his whereabouts.

Although a warrior with a slender stature and a petite jawline, Seori is tomboyish in appearance, keeping her dark violet hair short, for example. However, she eventually grows it out and even styles it in a side ponytail with a poofy bun. Like most Volaines, Seori has sapphire blue eyes that, upon drawing her powers, grow cyan with two white rings circling her pupils. 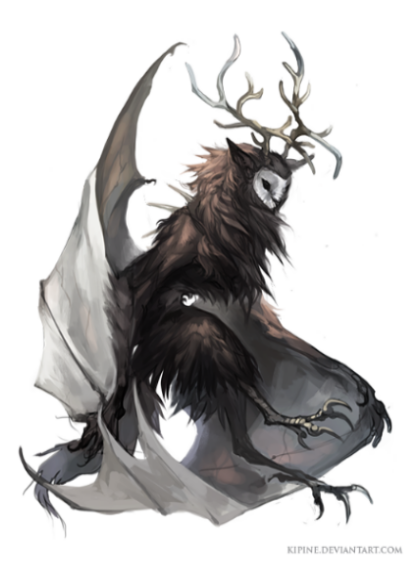 by Kipine
Seori is a pure shaman within the Astral Realm, lacking the conventional means of spellcasting as a result. Like many shamans, she compensates this through her mental projection and spirit form abilities. Her spirit form takes on the appearance of a mutated owl with large, flexible wings and protruding antlers. With her physiology, she can inflict severe damage to her enemies, easily forming soul strings that allow her to bend the will of her enemies. Seori, however, distinguishes herself as a shaman by using these abilities to tame magical animals, particularly owls. By forming a soul string with an animal and commanding it in battle, she indirectly gains access to spells relating to the schools of evocation and arcane magic. As such, she is not only a shaman but also a beastmaster.

She wears dark leggings, high boots, and either a quilted jerkin or a blue long-sleeved shirt as her day-to-day outfit. Due to the harsh winters of Astrea, she covers herself with a fur coat. In most other climates, she dons a violet cloak and, on her right shoulder, a feathery pauldron decorated with the skull of her previous owl. Over time, Seori develops a more feminine style of clothing. She would occasionally wear a long-sleeved gray dress with a ruffled skirt, alongside a leather belt, a light gray scarf, and an owl pendant. During religious festivities, she tops off the outfit by strapping an owl skull at the top of her head — a symbolic representation of her spirit form.

Seori carries a spear with a blue leather wrap in battle. As an enchanted weapon, it gradually emits a light each time it is directly exposed to mana or a mystic's blood. Not only does the stored mana augment the weapon's attacks but it can also release a tremoring pulse to the surrounding area, knocking back any nearby enemies. 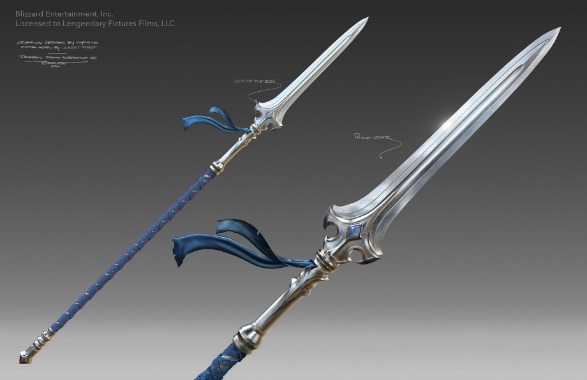 You sure love to overcomplicate things. I bet you think it makes you look smart, but I say you're just making a fool out of yourself.
Seori to Ains

Seori is a person who acts before she thinks. However, while her impulsiveness often clouds her judgment, she is by no means simple-minded. She is clever enough to adapt to certain limitations, as seen with her capabilities as a shaman, and she makes a fine leader as the Chieftess of the Nightbringer Clan. Seori is not one to overcomplicate. She's rather straightforward with her approach, searching for clear cut solutions instead of ones that are convoluted. Many times has she avoided casualties because of this. In terms of emotional intelligence, she falls short on this. Her fear of vulnerability creates a struggle to deal with both her's and other people's emotions. Although she may not be interpersonal, she is instead intrapersonal through her independence and self-awareness.

Seori values loyalty, honor, and the welfare of others, but amidst a culture where racism is prevalent, her moral code conflicts with her sentiments against the Ithicans. Regardless, she does not embrace the inhumane treatment commonly practiced by those around her, such as dehumanizing an Ithican with a face tattoo. She also refuses to enslave their minds as a means to exploit their magical abilities. This is why resorts to animals instead. This, of course, does not change the fact that she resents the Ithicans for tearing her family apart.

Seori despises perfume of any kind as it makes her easily light-headed. Despite this, her hygiene is well-maintained, though she may neglect it for a few days out of pure laziness.

She may sometimes question Eulara's intent when misfortune strikes. Still, she faithfully worships the Moon Goddess, as every Volaine should. As a Nightbringer, she likewise venerates the Great Owl, hoping to draw upon the Spirit's goodwill. This is especially so in battle. While Seori views Eulara and the Great Owl as her two patron deities, she still acknowledges the other Spirits. On the other hand, she views Solistra, the supreme goddess of the Ithicans, as inferior. However, she doesn't completely denounce the deity, unlike most.

Seori radiates with confidence. She is very vocal and opinionated, unafraid to speak her mind unless doing so brands her as an outcast. As a person with a guarded personality, Seori can lose that confidence when revealing her more vulnerable side, becoming bashful and flustered as a result.

She loves to spar and duel in her free time, even more so with a cheering crowd. It is where she can demonstrate her strength while beating the odds against challenging opponents. She regularly goes hunting, which she does not only out of a necessity for food but to also build her patience. 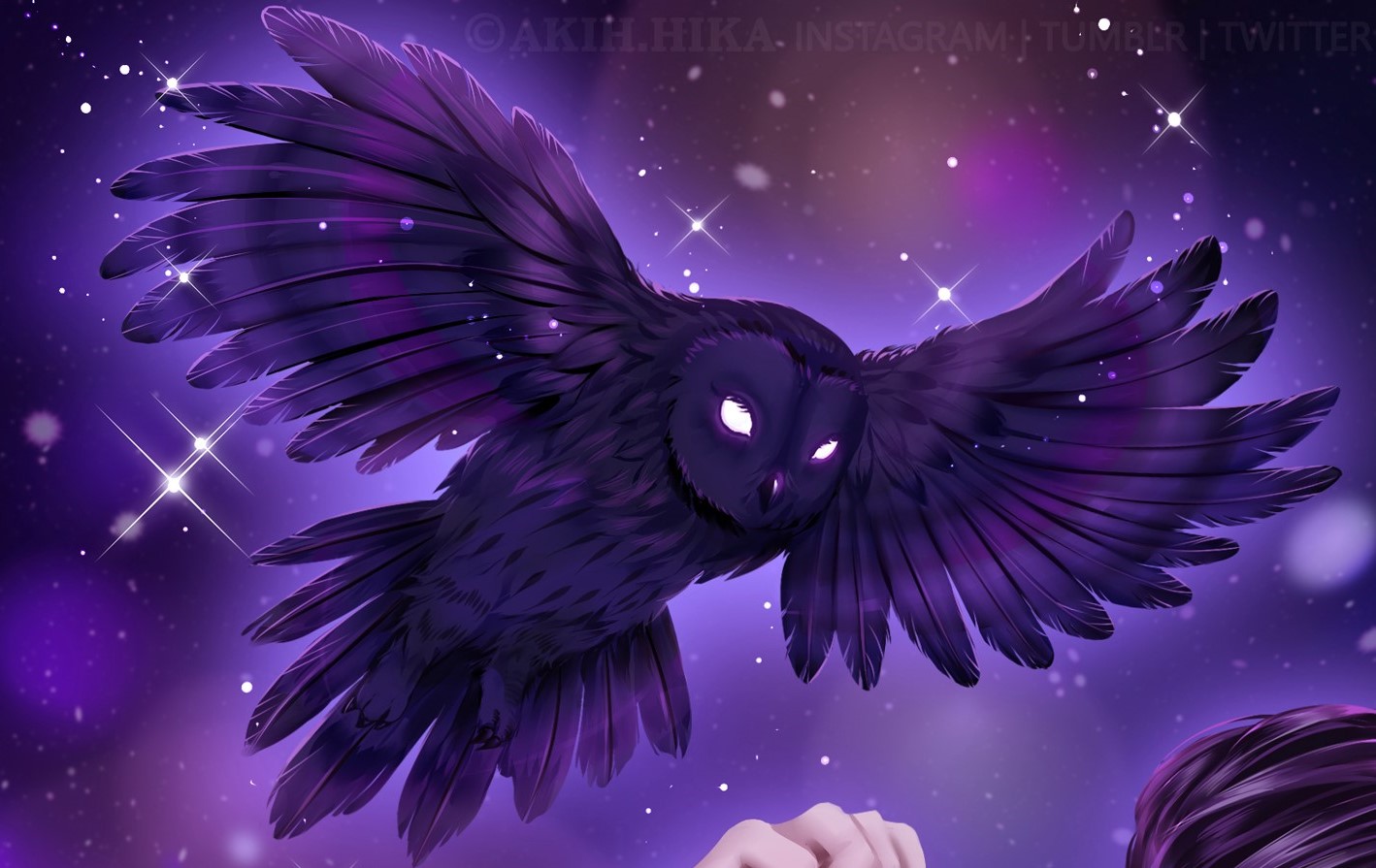 by Akih Hika
Seori has an affinity for owls. She named her first one "Yudai," and he poetically died shortly after she adopted him, no thanks to his name. Her current pet is Eri, a magical owl personally named by Ains. Eri is oftentimes called "Lucky Star" because, unlike Yudai, not once has she ever been injured, even in the heat of battle. She is a hybrid between a Star and Moon Constitution, though she is predominantly the former. For this reason, she cannot specialize in mental projection. Only the schools of arcane, evocation, and perception. Eri is currently in the Origin Realm and can only learn two spells. Universal and perceptive abilities do not count.

Seori is crude and blunt, frequently spitting out snide remarks. Because of this, she may rub people the wrong way and, much to her dismay, strain her relationships. She had a fallout with Ains two years ago, and the latter went missing shortly after. She remains unsure of whether he's alive or not. 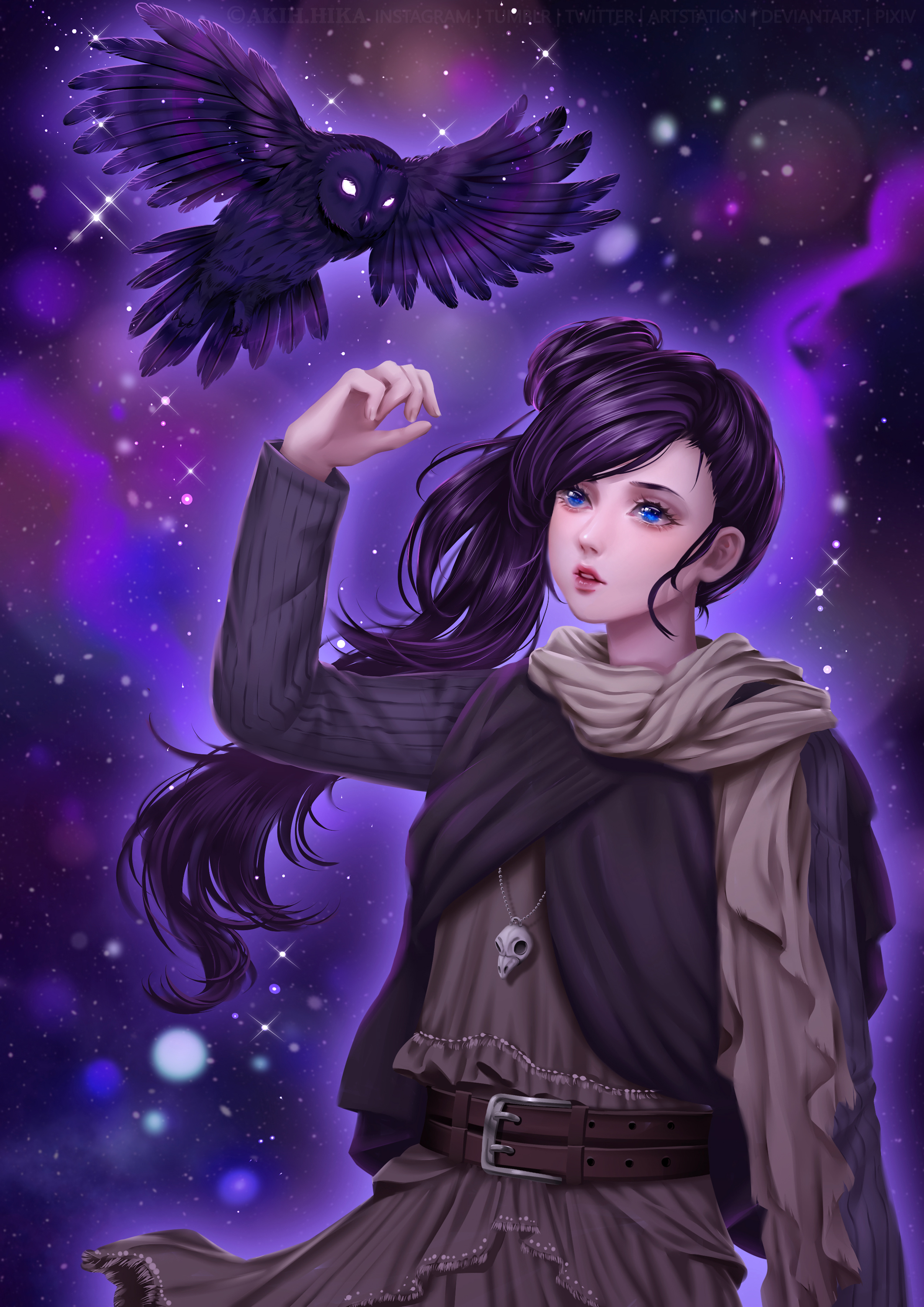 A sorcerer who aspires to become the Astral Scholar, hoping to succeed where her mother had failed.

A cold and calculating man, Zieren was dubbed as the "The Revenant King," for he had returned from the dead and avenged himself against the transgressors that overthrew him.

Though a virtuous ruler with noble intentions, the many years of war left Agatha jaded and cynical. It was only after betraying her morals and murdering her former friend that she ushered in an age of peace.

As ostracized members of Volaine society, the Faceless Ones are dehumanized with facial tattoos, stripping them from their own sense of individuality. 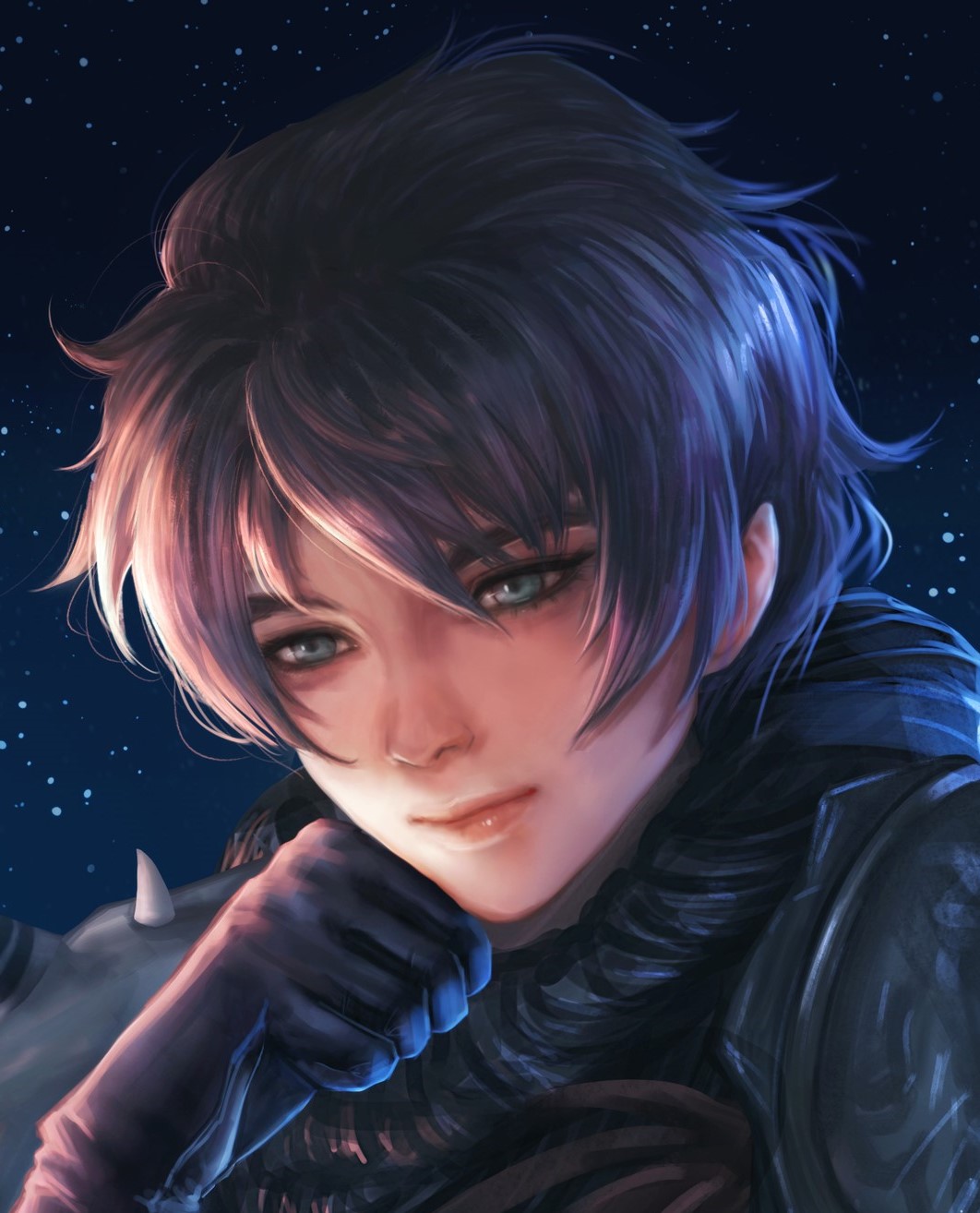 Thank you for the read!