Power always requires a sacrifice. A sacrifice where one forfeits a crucial part of himself. That was the price I had to pay. That powerless little kid whose hands were too small to carry the weight of his crown. I had to snuff him out and cast aside his childish toys because that was the only way I could survive. That was the only way I could ever move forward, which is what everyone would’ve wanted. After all, if I hadn't then who would?
Ains Ravenwood

Born as a prince of Volana and destined to be its future king, Ains suffered the misfortunes of losing his birthright when the Ithican Empire defeated his father⁣  in the Sun and Moon War, marking the end of the Ravenwood dynasty. This gave the Ithicans the opportunity to seize the entirety of his homeland and oust a large number of his people into the harsh winters of the Astrea. Although he never wanted power and especially the burdens that followed, Ains — unable to ignore the suffering of his people and the final wishes of his family without experiencing some form of guilt — will stop at nothing to restore the throne, even if it means resorting to morally reprehensible acts or sacrificing his own happiness. However, it doesn’t take long for it to take a toll on him, both physically and mentally.

Ains bears a strong resemblance to his father with his fair skin and black, feathery hair. His eyes are emerald green which transitions into a sea-green hue upon tapping his magic. When using it, there are two white rings that circle his pupils, indicating to be within the Astral Realm as a mystic. He is somewhat skinny but is overall well-built. In terms of distinct features, Ains has a notably large scar on his right shoulder and another on the left side of his waist. He also has a piercing hole on his left ear which has not closed up, even though he barely wears any earring.

Ains possesses a rare constitution and therefore lacks the conventional capabilities often seen in a Volaine, all of whom are shamans. Whereas shamans primarily specialize in mental projections, his abilities are more oriented towards the physical realm. As such, he excels more in the schools of evocation and arcane magic. Much of his basic abilities, however, otherwise resemble that of a shaman.

As a third-tier magic user, he can learn a maximum of six spells. Universal and perceptive abilities do not count. 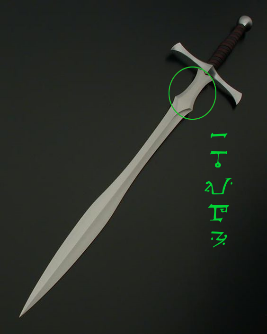 by Raven Armoury
During religious ceremonies or holidays, Ains dons a black feathered coat with two spiked-covered pauldrons resting on his shoulders, a dark blue robe underneath, and a raven skull with ram-like horns to finally top it off.

In battle, he wears a light plate armor. On the front is a dark purple and a dark green tabard depicting the image of a raven and a moon, and attached to the back is a tattered cloak. It's a pretty worn-out look, but the feathers decorating his shoulder piece slightly make up for it. Overall, however, it should be noted that Ains isn't very extravagant in most cases, so he prefers to wear something as simple as a white button-up shirt and a pair of dark trousers for casual wear.

Ains carries a leaf-shaped rune blade in battle and has a dagger attached to his waist as a secondary weapon. He hardly uses the dagger, but it does offer an advantage when he pins an enemy to the ground.

Besides magic, Ains relies on his wits to further advance his agendas. He is exceptionally calculating and constantly takes the variables of his situation into account. In addition, his keen observations allow him to pick up what seems to be the most minute detail. This helps him to easily decipher other people's motives, which he can then exploit. Ains hardly ever acts without restraints, which can cause him to delay a certain problem for a while. Though once he's made his decision or an opportunity strikes, he will aggressively pursue his goals.

There will always be those who will go against you. Be ruthless.
Zieren to Ains

Like most Volaines, Ains held a grudge against the Ithicans who had torn his family apart. His sentiments initially made him ruthless without hesitation, albeit with age and experience, he developed a more relativistic perspective. This made him more open-minded unlike before.

However, with open-mindedness comes many moral dilemmas. Ains longs to be a better person in comparison to his younger self, but he unfortunately struggles to live up to that ideal. The pursuit of power inevitably attracts a breed of enemies. To survive, immorality becomes a necessity. While he does maintain some level of honor and is absolutely against needless violence, he will favor efficiency over morality if need be.

Ains is a bit of a neat freak and cannot stand a day without washing himself. However, he tends to grow out his hair, oftentimes way too long. Although he finds it inconvenient, he refuses to learn how to trim it, despite being perfectly capable to do so. He is moreover picky about who cuts it, but he recently had it trimmed by Illethia after growing it out for four years.

Although adherence to Eulara is essentially an obligation, especially due to his upbringing, Ains is rather agnostic. As a person with a relativistic outlook, he struggles to favor one faith over the other, and this is especially so after having been exposed to other cultures. Nevertheless, Ains still takes it into account as a means to amass popular support.

As a charismatic and witty person, Ains is an ambivert. However, he leans more to the introverted side and can become increasingly stoic and emotionally withdrawn. This is due to his workaholic nature and partially due to his fear of vulnerability. Unless opted to do so, he also prefers to spend most of his time either alone or productively rather than surrounding himself with a large crowd. In spite of this, he is still easy-going and mellow when he has energy.

He likes to read in his past time, particularly spell books to further augment his magical capabilities. He also enjoys cooking and works as a chef at The Red Reverie⁣. While he has no pets of his own, he likes the company of animals and is relatively fond of Illethia’s cat.

It's funny how much the universe works against me sometimes...

Ains is both crude yet refined. Back when he was a prince, he was quite the bookworm and naturally developed an eloquent way of speaking. He later became more vulgar during his exile, partially due to Seori, and picked up snarky and self-deprecating humor. He usually switches from one to the other depending on the situation, and there are times when he can be soft-spoken.

A sorcerer who aspires to become the Astral Scholar, hoping to succeed where her mother had failed.

Seori is the Chieftess of the Nightbringer Clan who suffered a turbulent childhood through the loss of her home and family. In an attempt to salvage any semblance of her past life, however, she seeks to uncover the whereabouts of her missing cousin.

Though a virtuous ruler with noble intentions, the many years of war left Agatha jaded and cynical. It was only after betraying her morals and murdering her former friend that she ushered in an age of peace.

A cold and calculating man, Zieren was dubbed as the "The Revenant King," for he had returned from the dead and avenged himself against the transgressors that overthrew him.

Welcome to the Red Reverie, weary traveler. Here you can find yourself at home, meet new faces, and enjoy a wide variety of our delicacies, all at an affordable price!

Azurlets are magical flowers native to the region of Volana. The majority of their nutrients are from mana, and as such, these flowers can survive without soil or water. Because of this, they are said to never wither.