In collaboration with Qurilion. Thanks for your feedback. ^^

It is the finals of the Wall Ball school league. We are the only ones who use the aggressive strategy only, which makes us vulnerable to fast balls and teams that are focused on one hole. But I don't think that the other team can realistically beat us. Ka'an and me are just too good of a back line.
— Gu in his youth diary

Wall ball is played with a ball sometimes made off rock and moss, sometimes made off metal. The goal of the game is to get the most points until the end of a 40 minutes period. The ball, when on one side of the field, may only be touched twice, and only very briefly. It is also not allowed to push the ball with a heat wave when not having played it. These two times can be by the same players, but usually are not. The field is separated by a wall in the middle, which has five holes. Getting the ball through these holes is a necessary requirement to achieve points - or to not gift any points to the enemy team. Points are achieved in three ways:

When a team gets the ball all the way through enemy lines onto hitting the opposite wall, they get 3 points. This only counts under one special condition: Say the ball arrived through the upper left hole into the orange side. While it is allowed to shoot the ball right back through the same hole, this would eliminate the chance to get any points by this means (while this tactic is indeed sometimes used to get 2 points by making the enemy team drop the ball to the ground).

When played in a gym, hitting the ceiling with a ball that you play, no matter the side you are hitting it on, means 1 point for the enemy team. The same is true when hitting the middle wall.

When one team drops the ball to the ground, or needs more than two touches on their side to get it over, that is 2 points for the enemy team.

The main strategies are the offensive and the defensive one, with many mix forms between them.

The offensive strategy has one player on each hole, trying to get approaching balls instantly back onto the enemy field. The 2nd and 4th position (on the higher holes) usually have very strong legs to jump high. The back line only consists of 2 magmer in this strategy, asking these two players to have an insane reaction speed to catch balls that their offensive team mates miss. No need to say, this strategy is very hard to execute, but it is also very hard to play against when played properly, since it might happen that a player on one of the lower holes gets no time to breathe with all the balls coming his way in a very short time.

The defensive strategy features five back line players, hindering the enemy team from hitting the wall. The two players that are on the offense usually get passes from their back line in this strategy. While this strategy is much easier to execute on an individual level, it needs a big amount of team synergy. It is also easier to counter since the enemy team usually sees the ball coming early.

Some magmer, when playing in a gym, hit their hands into the ceiling and hang on there, moving the ball with either their head or their feet.

Some magmer send a heat wave behind the ball to increase its speed, although hitting an enemy with a heat wave is considered a foul.

Some magmer use small earthquakes to communicate with their team mates, especially when playing the defensive strategy.

In Kot, there are 3 places to play wall ball. There are two gyms, one of which in the school and the other one under a medical laboratory, which occasionally tests the impact of certain drugs on the physical capacities of a sports man.
The third place is an open doors field, where only the center wall is built up. Here, shooting a ball over the height of the wall counts as a ceiling-shot. This field is only really applicable for hobby players. 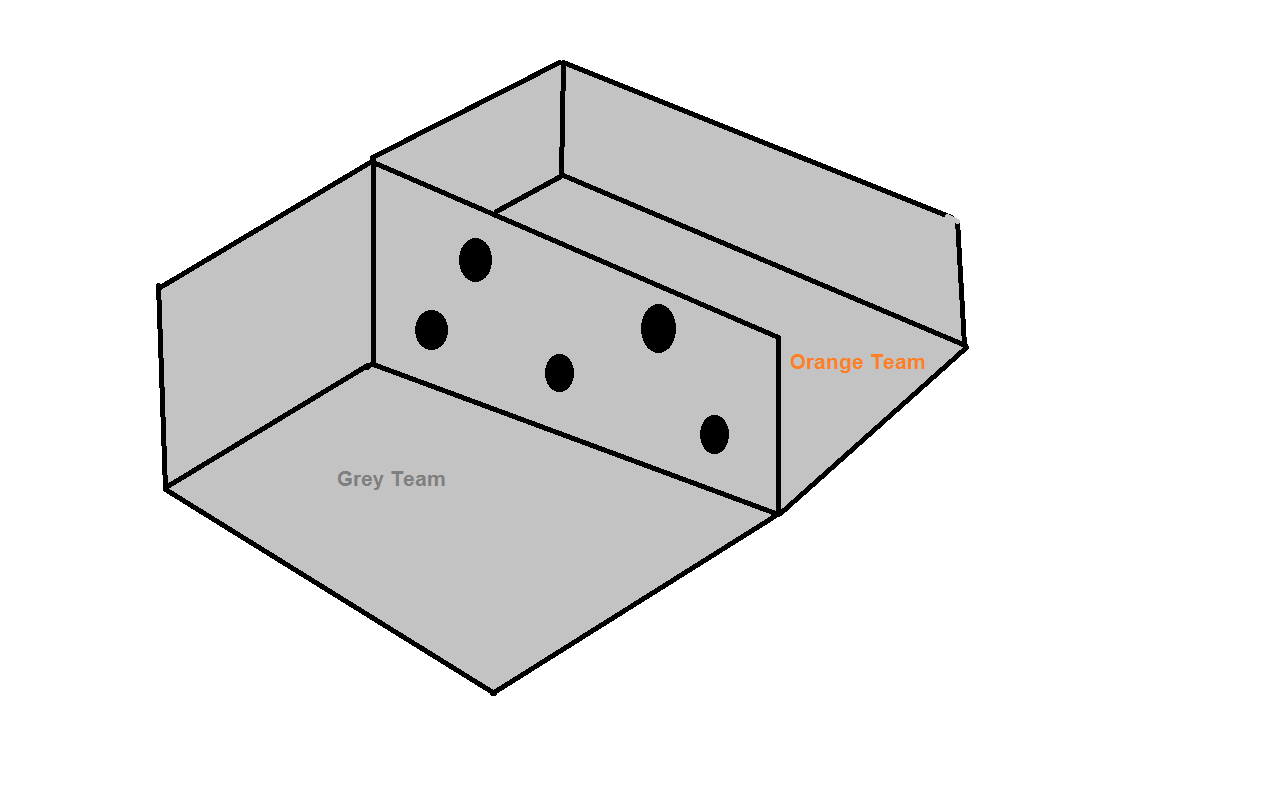 The middle wall of wall ball. The lower holes are around 2 meters high, the upper ones about 6 meters. 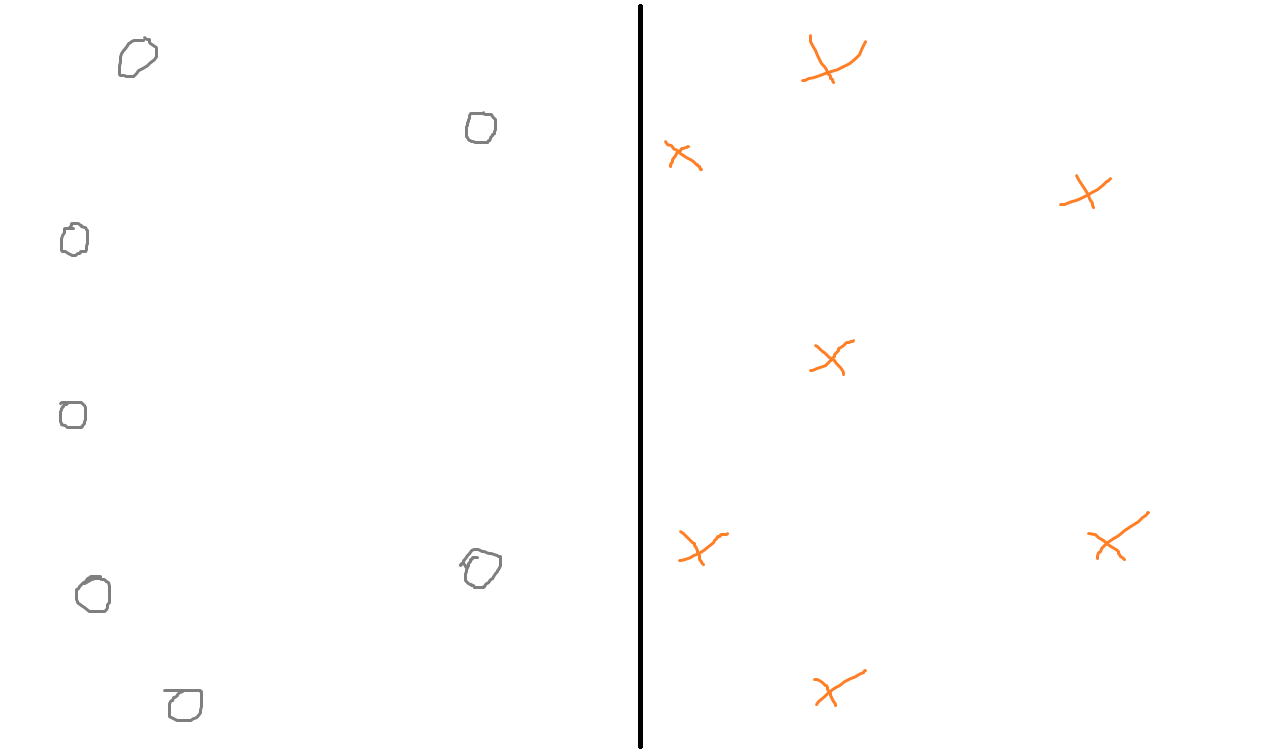 The wall ball field. The walls to the outer sides are without holes, while the middle one looks like above.

On the picture, the grey team is set up as a very defensive strategy, the orange one as an offensive one. In 2-line-strategies, like the ones shown here, the positions are usually numerated as follows: The front line gets numbers starting at 1, going from left to right. Then, the back line gets the remaining numbers up to 7. So in this case, the orange team would have offensive from 1-5 and defensive 6 and 7, while the grey team would have offensive 1 and 2 and defensive 3-7. 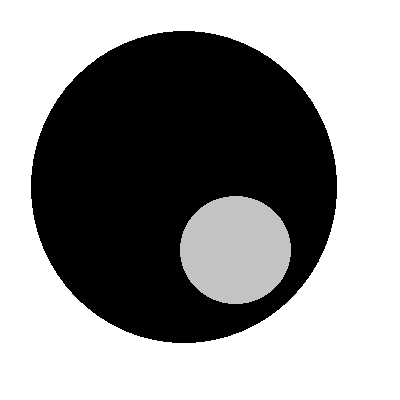 This image shows the size of a usual wall ball (grey) compared to the size of one hole (black). Its diameter is about 10-15 cm. The hard materials used are the only ones that are stable enough to form a ball which does not instantly break upon the hit of a magmer, although it is common that 1-2 balls break over the course of a tournament if stone balls are used. Although it might sound lethal for you human readers, a magmer can easily take a shot with a ball made of stone or metal. Being hit by one feels for them like being hit by a volleyball feels for a human. It hurts, but after a few seconds you should be fine again.
Magmer Culture and Myths

I like how the ball is made of a non-bouncy and very hard material. Though I'm not sure how the game is played exactly, what do players do with the ball, just throw it at the other side? Also, it seems like a dangerous game to play at schools if it is just people hurling a solid heavy ball at each other.

The magmer anatomy makes this game much less dangerous than it sounds. I added a paragraph about the ball which explains that, as well as a sentence about how the ball is supposed to be played (only touching it 2 times max before playing it to the other side).

Much more clear to me now!

How much bigger than the ball are the holes? Is this a game that requires a lot of precision just to get the ball through the wall?

It requires some precision, but not that much. I added a picture showing the size of the ball compared to a hole.

I like the idea of this game, seems lethal if you are hit by a particularly fast ball, what kind of protective gear do they use if any?   On a grammatical note, I notice you've used whole instead of hole a few times there.

It is not lethal at all, due to the physical features of the magmer race. Added a paragraph on the ball which explains it. ^^

To be frank, I didn't understand much of this sport. Where are these walls with holes? I was under the impression they were at the end of the field, but in the sidebar, you speak of a middle wall and the ball seems to pass through a hole when it arrives on the opponent's side of the field? The positions seem to be numbered and mapped to holes, but I don't get how? Besides, there are quite a few spelling errors...

I reworked some of the page, including getting rid of the spelling errors. I would appreciate if you could take a second look. It seems like I was half-asleep when making the original article. ^^

Alright, now I know what the game is about. Interesting concept, like a variant of volleyball. A few questions which might help expand the article: Is moving with the ball allowed? Is blocking holes allowed? If so, what happens if both sides block a hole and the ball lands in the hole?

It is completely allowed to block a hole. But notice: two of the holes are 6 meters high. It is pretty much impossible to stay up there, hanging on the ceiling, for the entirety of the game; not to mention that it is not really easy to score with both hands on the ceiling. Also, the lower holes are rarely blocked completely because, again, the hole is just a little too high and too big to be blocked by one player completely. And sending of two players to defend each lower hole only leaves one player to defend two upper holes. Good look with that. "Moving" the ball is only allowed in the sense that you shall hit or kick it into a specific direction, but you shall not move with a ball in hand.