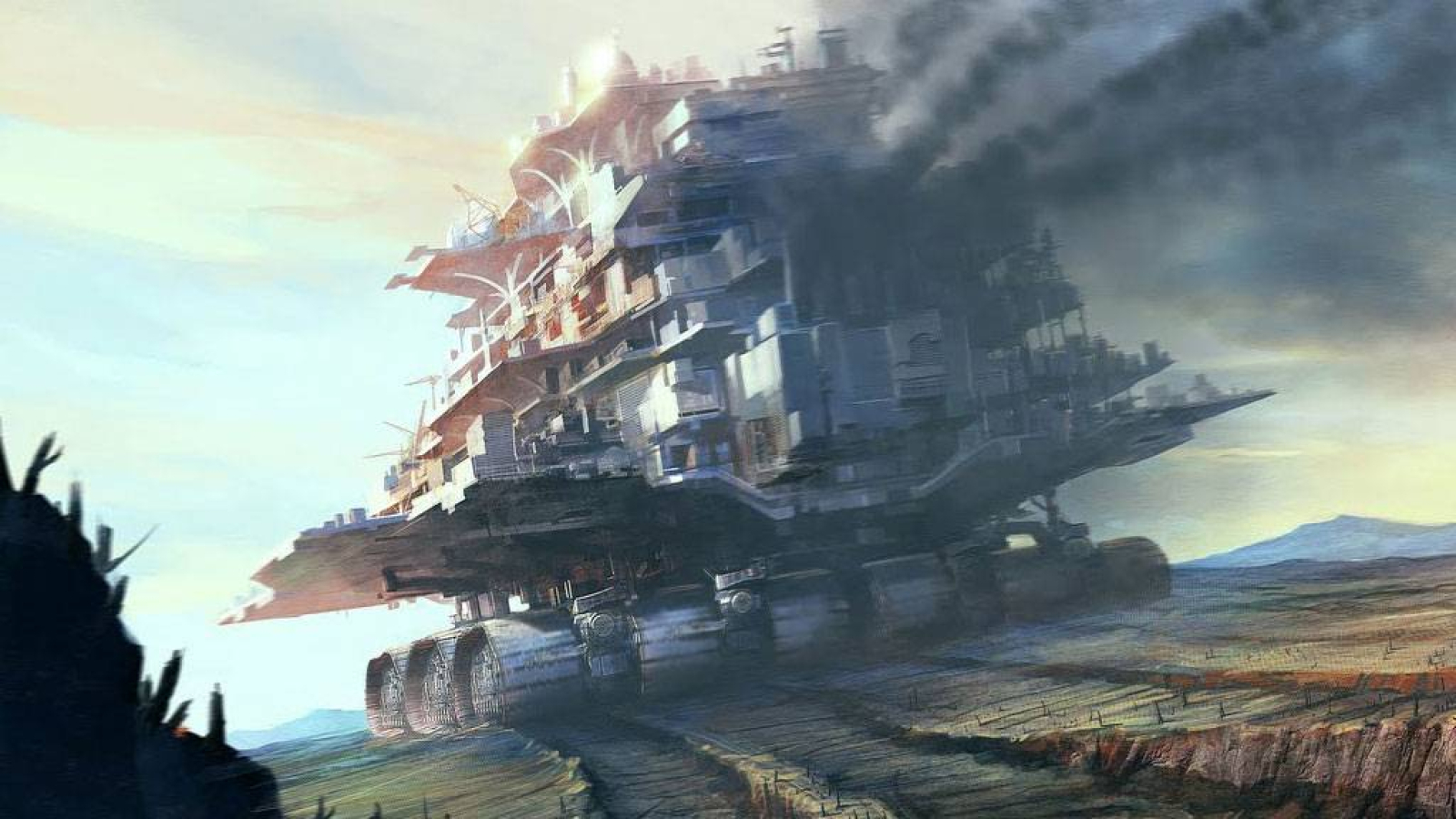 Welcome to your new home, kid. Ever been sea-sick on land before?   Remember the rules and you'll be fine; carry your gas-mask at all time, keep your weapon clean and never go below deck without an Nekrobiotek there. The stiffs can get rowdy.
— Sgt Sarah Callaghan

Purgatio-3 is the latest prototype Gigant fielded by the Korero-Take Republic, belonging to the Castle Class. Damage has seen it stranded near the front after a clean hit from a Godslayer Cannon, and the wounded behemoth has become something of a permanent fixture in the landscape since. Tents and shanties have sprung up around its treads and clustered around the trenches, with soldiers making homes for themselves where they can. 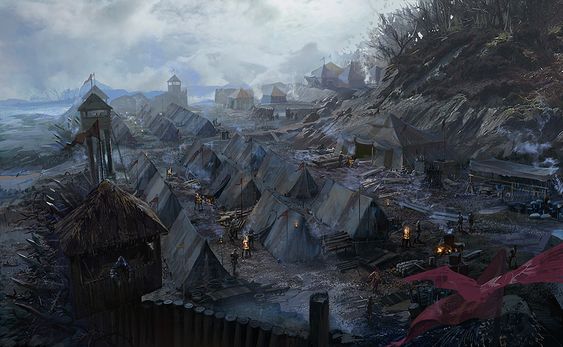 by Witcher 3
Purgatio-3 (or P3 to her inhabitants) bear the latest electric generator, powered by coal with a backup system that relies on pure muscle-power provided by the P3's undead garrison. This power is used to fuel the Nekrobiotek's magic and keep the Gigant moving. Despite being stranded, the Gigant seem to use as much electricity as it would at full operational status, but no one is keen to ask the Lead Nekrobiotek exactly what she is doing with it.

P3 is divided into three sections, in addition to the sprawling encampment around it: the Hold, the Deck and the Bridge.

At the bottom of the Gigant and sandwich between the giant threads lie the Hold. A mix between butcher shop and laboratory, the Hold is where the P3's Nekrobiotek and 'Butchers' practice their grim craft. Tanks of embalming fluid are filled to the brim with disembodied limbs and corpses, close to work stations where the dead are put together and prepared for the ritual chambers. Sluices carry away offal and gore that have no use, dropped down into a storage tank that the Gigant empty on the move. Since being stranded, the task of emptying the gore-pit have instead fallen to soldiers armed with buckets. 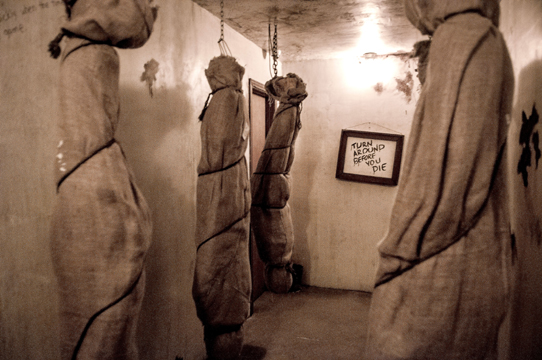 by 13th Gate Escape Room
The Hold is where P3 stores her undead warriors, stacked like wood in packed rooms and occasionally ambling out on the main floor by either accident or to work at the Nekrobiotek direction. When the P3 prepares for war, the Hold's large open floor is cleared and the dead are summoned to stand at attention, waiting to be unleashed.

Most of the P3 consists of "the Deck"; the garrison where the common soldier live, eat and sleep. Towards the exterior, the P3's corridors lead to armories and gun posts while deeper into the P3 lie the barracks, cantinas and recreational areas. Green recruits are more then likely to get lost in the labyrinthine Deck, and the more experienced veterans will frequently use the fact to play pranks on new arrivals - especially snotty officers. 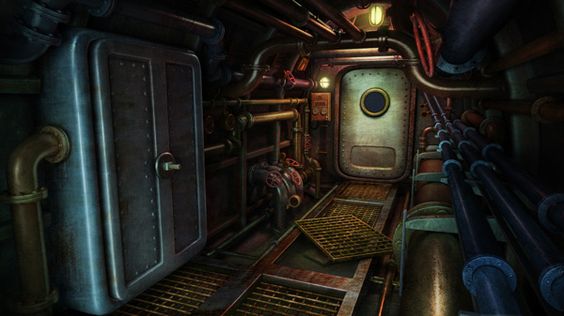 Maintenance hatches lead to smaller tunnels and crawl spaces along the Deck. While the massive warmachines are rugged beasts, able to trudge through mud and weather, the engineers are never idle.

At the top and center and spread out in a crescent from the peak is the Bridge, the place from where the Gigant is controlled and directed. It is where the officers live, apart from the soldiers below. The chambers here are more spacious than the barracks below, though space constraints mean officers frequently have to share rooms. 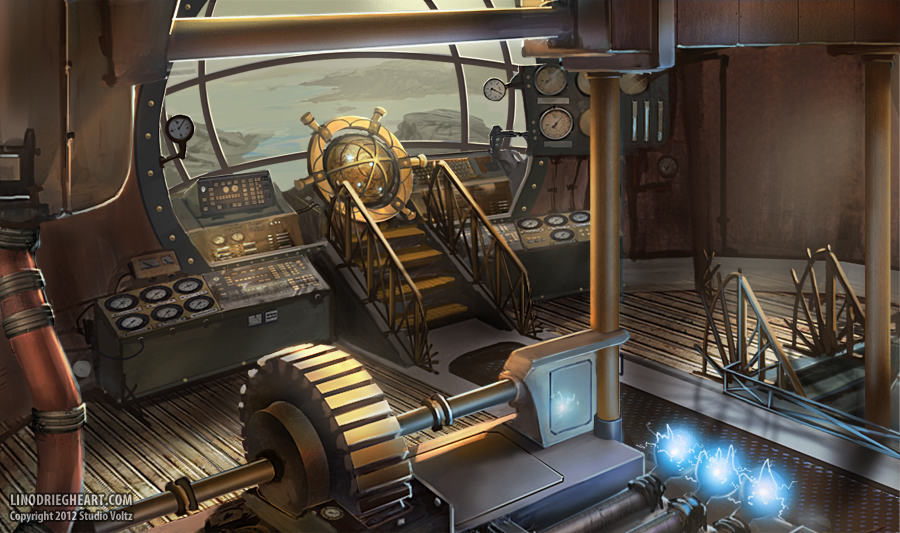 Despite the damage, the high command of the Republic want the Purgatio-3 to be ready by winter in just a few short months. The soldiers can feel the tension and know that something big is being planned.   On each side, year after year, there is the same message that comes from generals and politicians down to the trenches: it'll be over before winter's end.

Crew: 1 Division of Soldiers, 2 Divisions of Undead   Speed: Top: 10 mph. Current: None   Armaments: Artillery, machine guns and Boarding Torpedoes.     Note: In its current state, as many as three divisions are currently encamped around the Gigant. When the new Winter Offensive begins, this number is expected to return to normal.

What better way to fight than astride an iron titan?

When the trenches filled with gas and swarming undead or flooded from the seasonal rains, something different was required to keep the human soldiers of the War alive. The answer were the Gigants, titanic land-ships on treads or legs that crawled across the landscape. They evolved out of the Corpse-Cart of older wars, wagons (later trucks) that would roam the battlefields to collect corpses for reanimation. As the number of dead grew, the Corpse-Carts grew in size.   Each Gigant bristle with enough armament to level a city and each carry within their bulk a vast number of the undead. Boarding action between Gigants are some of the bloodiest and most fierce of the entire war, with no quarters asked or given.   Tough enough to shake off all but concentrated artillery fire and secure enough to provide passage through the near omnipresent gas that covers the Front, Gigants fulfill the role of mobile fortress, assault-craft and barrack all in one.

Not all Gigants are the same and each nation have their own variants. Some common ones are:   Castle Class - The first and most common Gigant are of the Castle Class: crawling strongholds that serve as garrisons and homes. Large enough to count as a town in their own right, most soldiers in the War live, eat and sleep aboard a Castle Class Gigant.   Imperator Class - Mounting the enormous Godslayer-Cannon, Imperator Gigants trade all other considerations for a singular goal: firepower.   Emissary Class - Heavily armored but with lightly armed, the Emissary's true weapon lies on in its cavernous hold; an enormous swarm of undead that it is ready to disgorge by boarding torpedoes or its ram-like ramp. It is a favorite in particular with the Shinomas Magocracy and their many necro-engineered warbeasts. 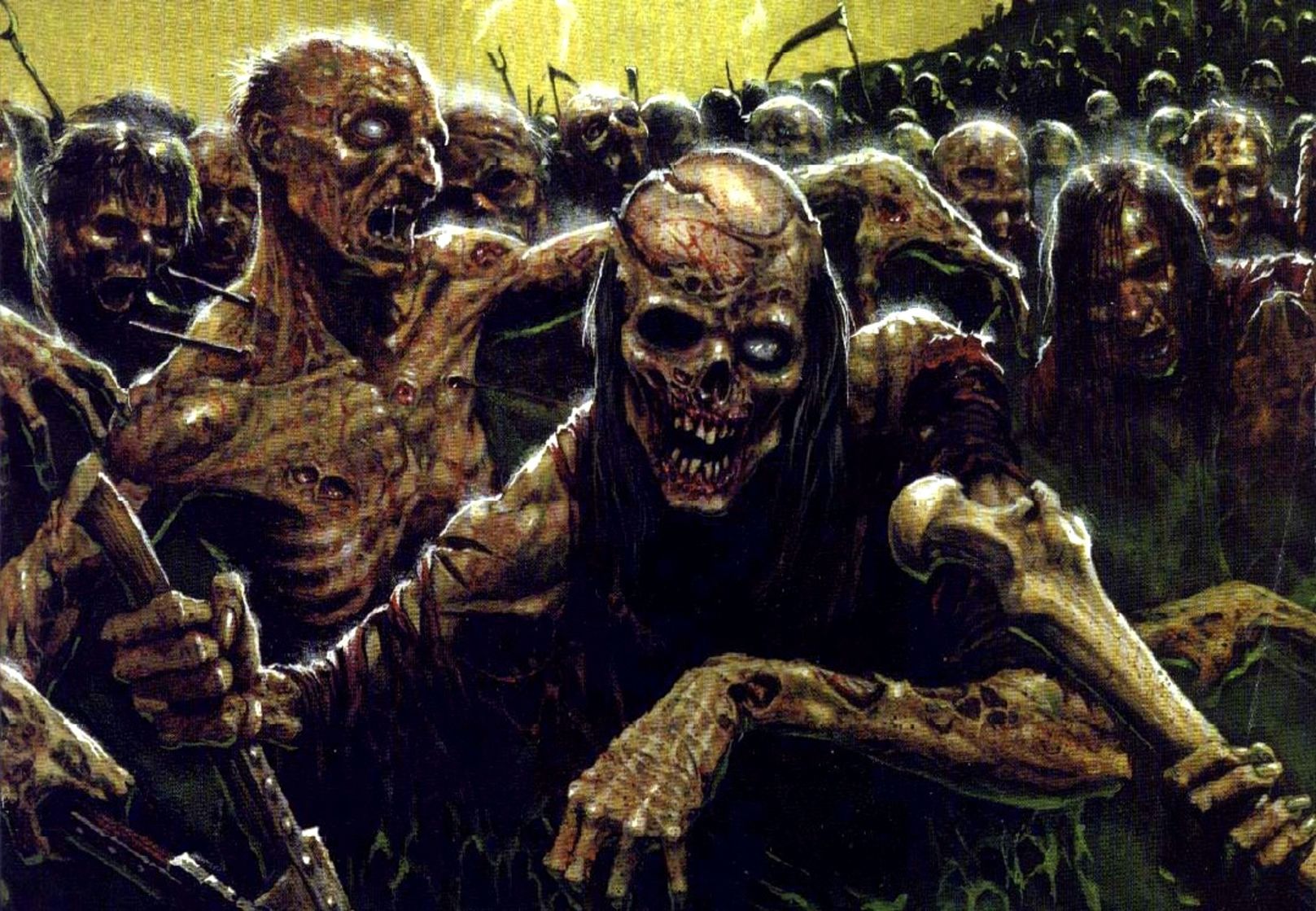 Answering: "Describe the settlement they inhabit and its unique characteristics."
Visit Qurilion's Competition Page Check all other answers to this prompt Competition Homepage

I love the quotes you put in throughout the article. They have a distinct tone and voice that really drew me in, especially with the World War I vibe I got from "it'll be over before winter's end."   Quick question: how are the living quarters arranged? Are they separate from the bridge and deck areas that control the ship? Do officers get their own bedrooms? Does everyone have to share a bathroom?

Thanks! I'm glad you enjoyed it! :D   Yup; common soldiers live in around the Deck. Kinda scattered barracks.   Officers live in the Bridge section: " The chambers here are more spacious then the barracks below, though space constraints mean officers frequently have to share rooms."   So.. Yes and no. If you're the biggest cheese, you probably get a room for yourself. Most need to share it with one or two others. Bathrooms are shared, communal affairs. Only the most important officers get their own. :)

You are an absolute mad man with the art and the CSS. It all comes together perfectly to compliment the text!   Love the idea of these driving war-behemoths.   One question I have though, I would love to see a little more about the history of the vessel, you got a good segement on it but I feel like it could use a little more into the original use and breakdown of it and how they maintain it.

<3   I'm glad you like it and haha, I'm glad I'm a mad man in this case. :D   I had a thought about it and I really liked the idea of how they started. So I added some stuff!   On it's history: "They evolved out of the Corpse-Cart of older wars, wagons (later trucks) that would roam the battlefields to collect corpses for reanimation. As the number of dead grew, so did the Corpse-Carts."   On its maintenance: "Maintenance hatches lead to smaller tunnels and crawl spaces along the Deck. For the engineers, keeping the Gigant going is an endless task. While the massive warmachines are rugged beasts, able to trudge through mud and weather, the engineers are never idle."   How does that look? :D

Well, that's definitely an intimidating upgrade for the Landship. I love your article, especially the detail you went into and how you described the differences between the various classes. You mention that the vehicle can be brought down via constant artillery fire or gas are there any other weapons being developed to bring it down or are more massive than the Purgatio 3?

I'm glad you enjoyed it!   I kind of touch on t hat implicitly: the God-Slayer Cannon is the premiere anti-gigant gun on the battlefield.   https://www.realmofhistory.com/wp-content/uploads/2017/11/8-biggest-guns-second-world-war.jpg   Something like that, maybe. But probably a touch bigger. Other then that, boarding actions are common (and incredibly bloody). I think I mentioned it, but maybe it needs to be highlighted? What do you think?

It wouldn't hurt to highlight the massive weapons being developed in response to this :)