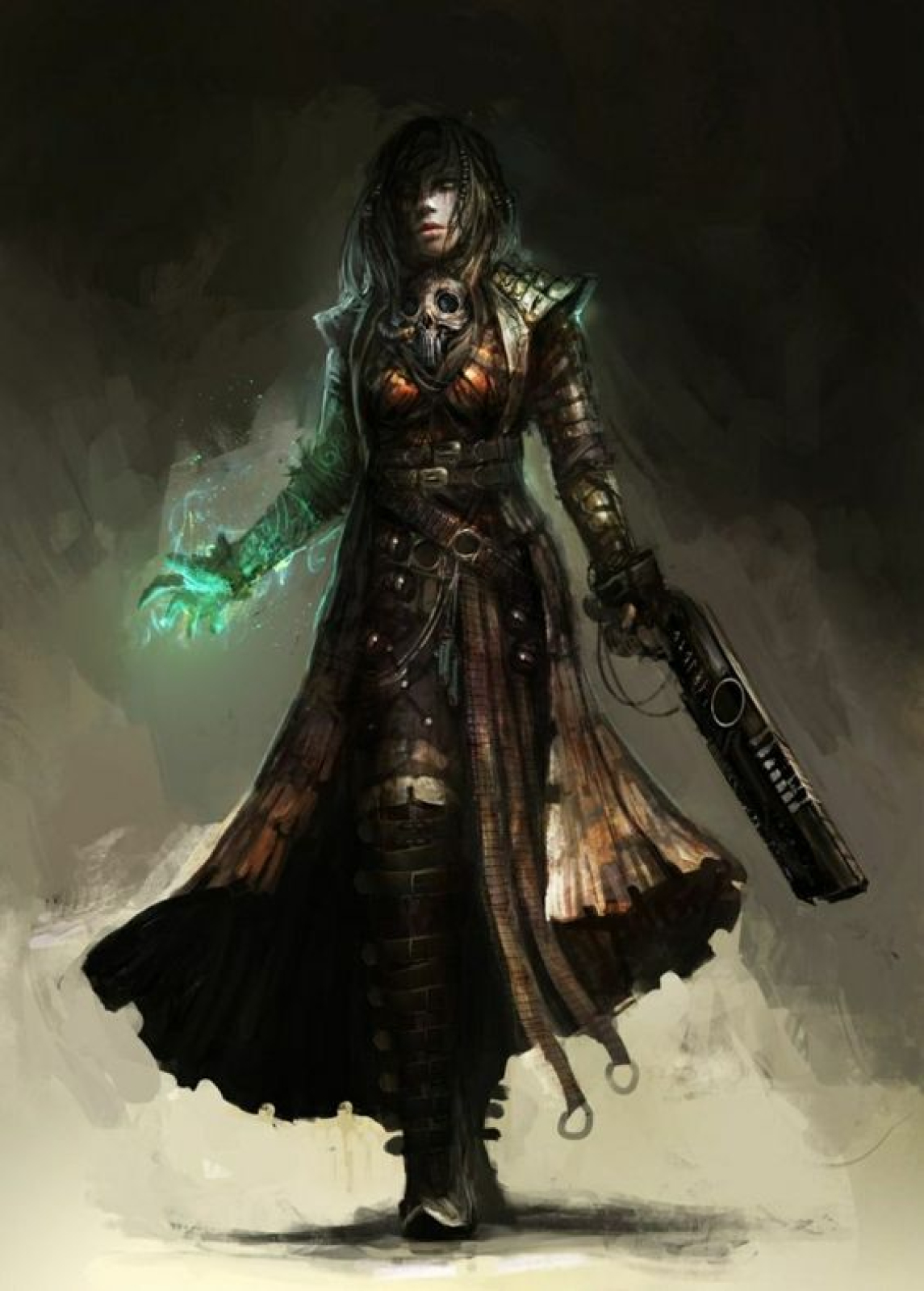 We are the engine that drives civilization. Without us, all the great works that have risen in the last century would crumble to dust.
— Elaine Rae, Master Nekrobiotek

Nekrobioteks are surgeon, engineers and necromancers all in one. It is they who raise the dead to fill the ranks of the armies that fight the great war, who work in the farms and factories. They are masters at their craft and true understanding of the Undead require more than just magic.

Masters of the Dead

The Nekrobiotek are the principle occupation for industrialized necromancy. They combine an understanding of the mechanical functions of the human body with their esoteric grasp of magic, seasoned with a healthy understanding of logistics, industry and profit. It is important to know not only how best to raise a corpse, but what corners can be cut to ensure it is still viable to do so. Others find themselves in the front lines of the Long War and have learned to measure the use of the undead in hours, rather than years.

Magic works by intent and for this reason alone it is important for the Nekrobiotek to understand more than just magic. A Nekrobiotek who understands the anatomy of the human body can more clearly formulate a precise intent to their spell. The more specific, more detailed and more directed a Nekrobiotek can make their intent, the better the results.

Nekrobioteks exist in nearly every industry, in some form or another. From the bright lights of Zombie Boxing to the gas-choked trenches of Cascera, Nekrobioteks continue to provide the world with all the undead that they require. 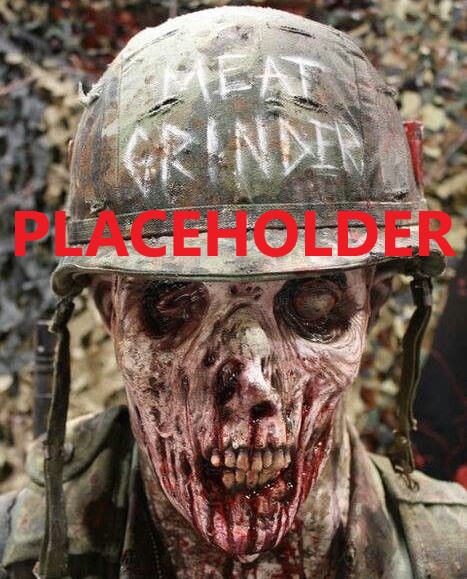 All great powers of the world have universities and schools where apprentices go to learn to become a master. These schools also serve as small centers of industry, manufacturing Warbeasts or Necromantic implants, as well as research. Even after a century, the potential within the field seem almost unlimited and each school seek to be the one that unlock the next step.   These schools are typically funded by a combination of their services to various powers, from private industry to the government, and grants. The military have their own programs of education, with a decidedly more martial bent - sometimes sneered at by academics, though never to their face. Becoming a Nekrobiotek is a long process and the usual length of a program is about ten years. The student must learn anatomy, biology, some mechanical engineering as well as magic. Once the basics have been mastered, students pick their specialization: Necroprostetics, necroengineering, mass reanimation, and so on.

There is nothing innate or limited to the art of magic - although some certainly like to claim that there is. In theory, any man or woman can learn to cast spells. But learning the art is time-consuming and expensive, meaning that most will never have the opportunity. The only force that decide who can and cannot become a Nekrobiotek are socioeconomical.

Once they have graduated, the fledgling Nekrobiotek is free to seek employment anywhere they chose though with the Long War, their license now demands they work within their native country. And there is no lack of opportunity: there seem to be no end to the demand for more and more Undead   Most Nekrobioteks are hardened by their education. Some come to see people as little more than flesh that has yet to ripen, while others employ to the very blackest of gallows humor. The drive required to full grasp the intricacies of Necromancy sets them apart from the common man or woman. No matter how casual mankind has gotten about the walking dead, staring into the abyss of it still leaves its mark.

By most of society, Nekrobiotek is a celebrated profession, similar to a successful surgeon or skilled lawyer. Successfully navigating one of the more prestigious academics of Necrology is a real badge of merit.   Some, though, still find them exceedingly creepy.

The tools of a Nekrobiotek are many and varied. The rituals they employ to channel magic and reanimate the dead require everything from incense to music. The centering techniques of a Nekrobiotek grows more elaborate as they grow in skill and understanding. All the ritual is there to aid the Nekrobiotek more precisely formulate their intent.   Beyond that, there are a few common pieces of equipment that all Nekrobioteks use in their work:   The Grounding Harness consists of a harness, large gauntlets and the channeling rods. It is used to divert excess electricity away from the Nekrobiotek's flesh and mitigate the impact of any potential backlash. The Grounding Harness does make magic more time-consuming to enact, but immeasurably safe. Most Nekrobioteks are happy to take that trade, particularly those who have been "buzzed" by backlash in the past.   Embalming agents are vital in aiding the Nekrobioteks in creating wares that last for a satisfactory duration. Each academy has their own preferred blend of chemicals and Master Nekrobiotek put their own twist on it. 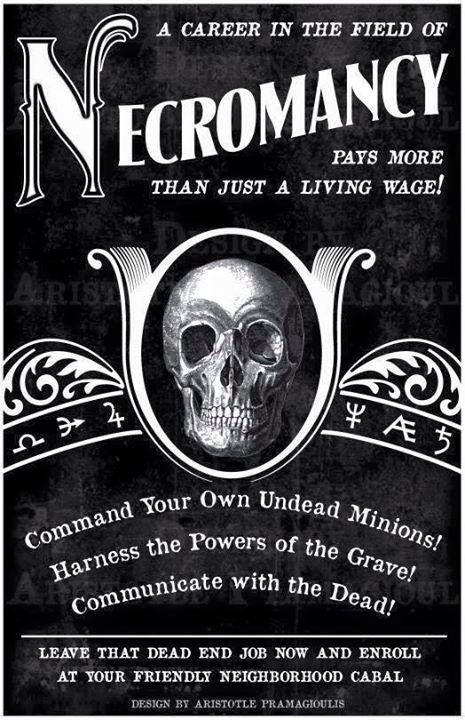 It is impossible to discuss Nekrobioteks without discussing the art that lie at the core of their purpose: Necromancy.   Ever since their industrialization, magic and Necromancy in particular have turned ancient traditions and taboos to dust, ground away under the inexorable wheels of progress. What was once unthinkable abomination is now everyday life across the world.   Read more about Necromancy

There are many things that need to be done for a modern reanimation to happen smoothly. The corpse must be collected, prepared and embalmed. Some Nekrobiotek have very specific requirements when it comes to the formation of their ritual. Failures must be disposed of and there are always offal and gore that must be swept away.   For all these jobs and many more, the Nekrobiotek employ servants and aides who have come to be known as "Butchers" for some of their more unpleasant work. The Butchers are not capable of magic themselves, although some Nekrobiotek make their apprentices assume the job as a sort of learning experience. If it's dirt, dangerous, smelly and unpleasant, there's a Butcher there ready to do it.     Read More about Butchers

Nekromecanics   There never seem to be enough of the Nekrobiotek to satisfy every industry and every front in the war. Others cannot afford their high fees and must content themselves with less skilled hands. Sometimes called "Zombie Repairmen", the Nekromecanics are fill the gap and do much of the routine maintenance work, such as replacing limbs, reinforcing joints or reapplying embalming liquids. Some even know Necromancy, though theirs tend to be of a simpler sort.   Read more about Nekromecanics

Among the Nekrobiotek, there are those who lead the way into the unknown and push the boundaries of science and necromancy: these are honored with the title of Master.