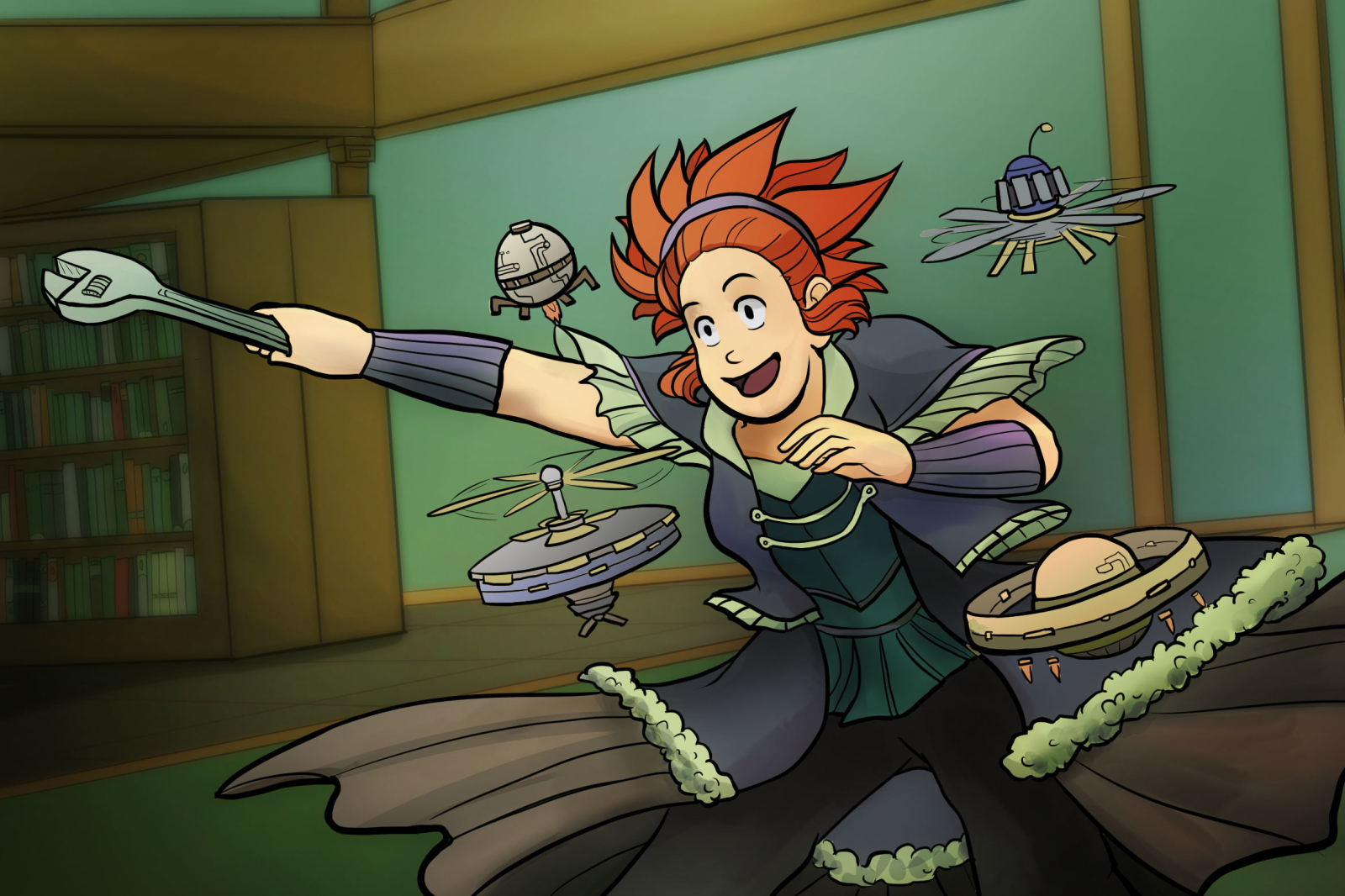 "Oh, this? It's just a bulldozer I whipped up."

Rana is an inventor that Astyr found in a secret library on Dias Fortuna. Supportive, innocent, and a bit naive, Rana's kind nature is extemely charismatic and instantly ingratiates her to just about everyone who meets her. Her simple way of seeing the world and people's true motivations also tends to be just the thing her friends need to escape whatever tangles they've gotten into. Her ability to construct weird inventions on the fly doesn't hurt either! 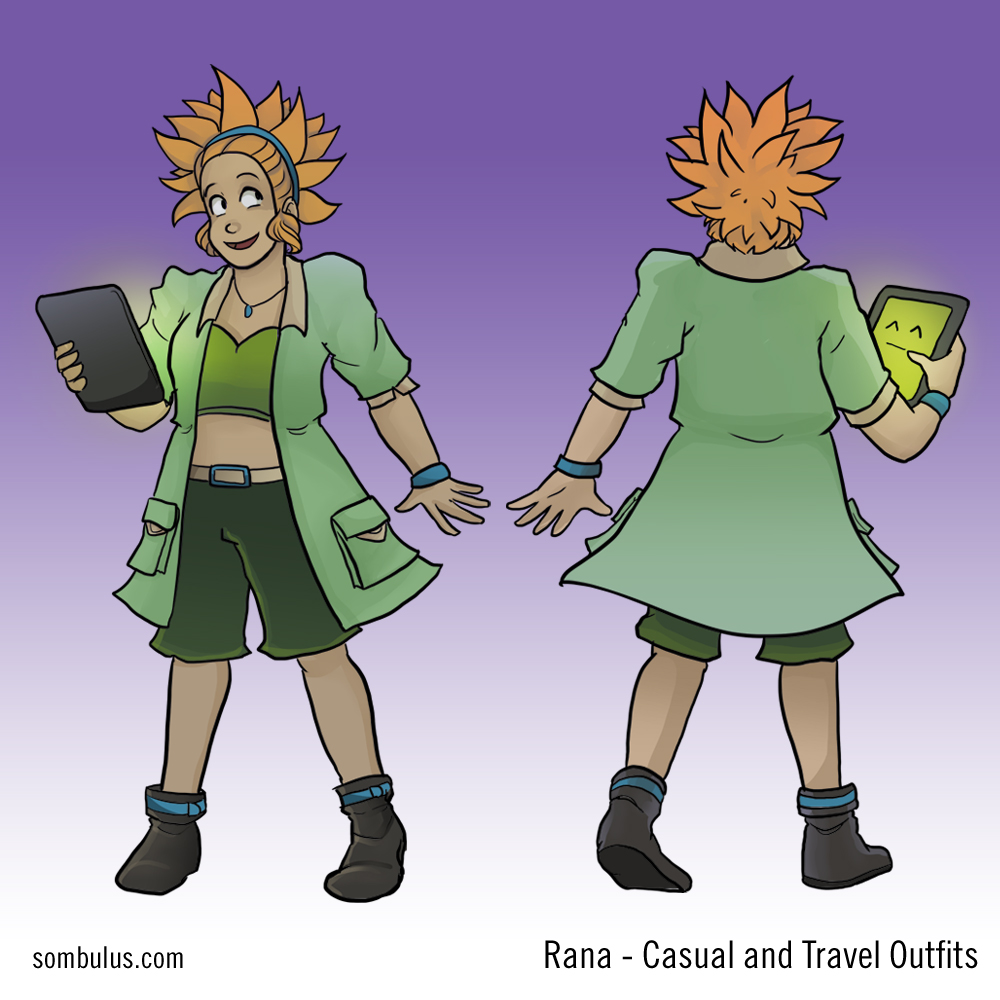 Rana is kind, gentle, and loving to everyone she meets, and endlessly supportive and empathetic to her friends, though she can be secretive about matters that she believes will hurt them. She loves hugs and being held by her closest friends, and makes close family-like bonds with friends quickly. She is aromantic and asexual.

Rana's preferred wardrobe often involves a coat of some sort. She always wears a headband to keep her hair out of her eyes. Wrist coverings are usually modest cloth sleeves. Early designs had no color leaning, but later designs lean green.

Not much of Rana's history is known, but Astyr and Sydney found her in a hidden library behind a gate on the world of Dias Fortuna. After finding the mnemonic gates, she decided to leave with Astyr and has been happily traveling with him for an indeterminate but extensive amount of time.

Rana is very scared of the dark. 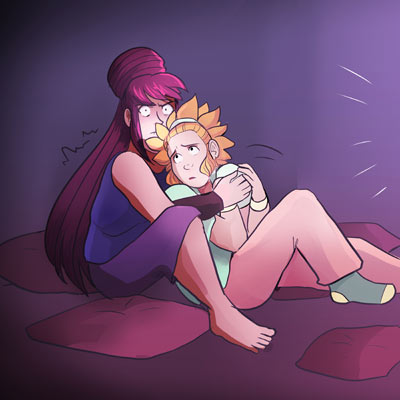 Despite their different temperments and views, Sydney and Rana care a lot about one another. Miscommunication of thoughts and intentions happen often in their relationship, but at the core, they both mean well and want the best for one another.

Sydney met Rana when she followed Astyr into the secret library in Dias Fortuna. Rana immediately won Sydney over with the promise of snacks. Astyr's offer to bind Rana kicked in Sydney's protective instincts, and Sydney has regarded Rana as an innocent by-stander that must be protected from evil influences ever since. Sydney feels a fierce competitive streak over Rana with Astyr.

Through their travels together, Rana realized that Sydney's essence was deteriorating, and made a practice of secretly putting essence binding solution in her tea to help strenghten the binding between Sydney and Astyr. Sydney eventually found out and became very angry, taking her frustration out on Tenge and Astyr for "poisoning Rana's mind". When Rana was later caught scanning Sydney's essence with QOIN, Rana confessed her fear that Sydney was dying, easing the tensions between them.

When Rana and Sydney meet again on Dias Onda, Sydney fails to see Rana's concerns about feeling unsafe on the Kanite worlds, and sets out to prove that Rana should trust her. The next morning, however, Rana is gone and Sydney believes Rana views her as a failure as a protector. 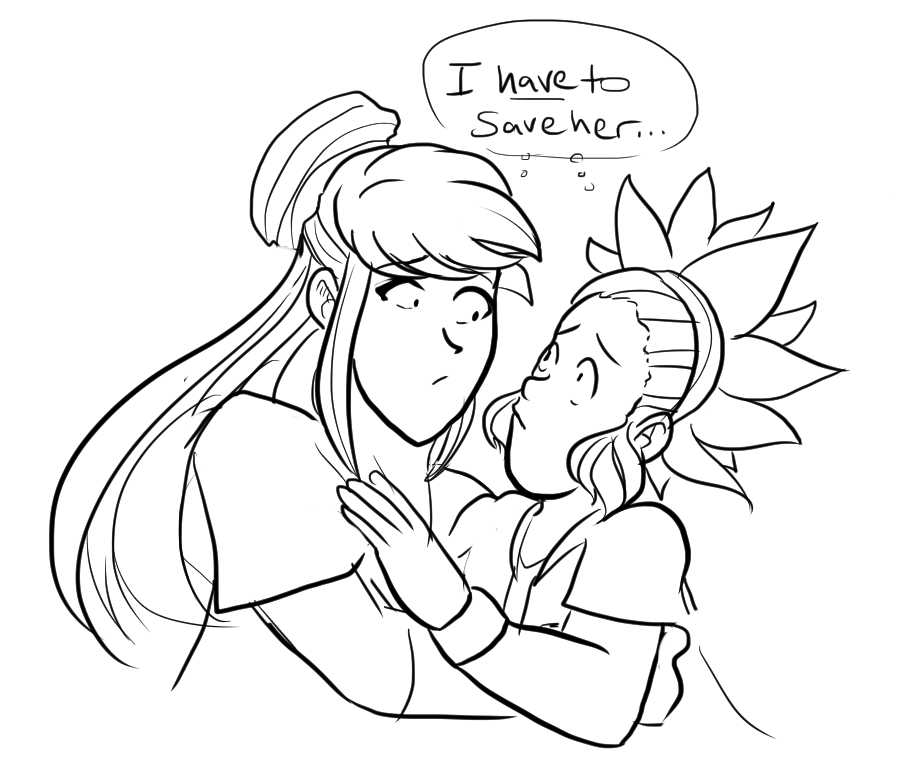 One of Rana's default expressions is holding/touching, and she will often take Sydney's hands when talking to her. Sydney sees this as a sign that Rana is looking to her as her protector, and will hold Rana's hands, shoulders, or embrace her when she wants to reassure her. In a dangerous situation, Sydney will lift Rana in a "princess carry" and run with her to safety.

Sydney takes a lot of pride in her role as Rana's savior. She is confident in her ability to protect Rana (physically and spiritually) and constantly assures the people in her care that she'll always be there and they are safe from danger. Rana doesn't always agree what constitutes "danger", but always feels a little more assured by Sydney's strength and determination.

Sydney speaks directly about things that make her upset, though when she loses her temper, Rana gets very uncomfortable. Rana tries to talk about her problems to Sydney occasionally, but is much more likely to hold it in, or try to fix problems before anyone notices.

Sydney came from a world with very little technology, and Rana loves to teach Sydney about the wonderful world of widgets. Sydney plays along to the best of her understanding, but is often left confused by her interactions with technology.

Sydney is sometimes driven so far into "protector" mode that she assumes she already knows what Rana wants. Rana, for her part, is conflict-averse so that she's not crystal clear about it either.

Rana fears that Sydney is too self-sacrificing sometimes, and doesn't look out for her own wants and needs. 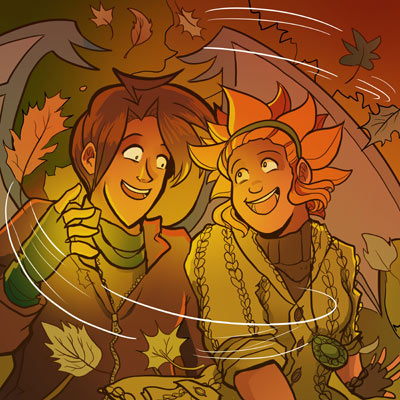 A happy and easy-going relationship, these two care about, impress, and trust each other a lot!

Asytr and Rana met when Astyr stumbled into the secret library where Rana was being held at Dias Fortuna. Rana's friendly personality and interest in Astyr's powers and travels made them fast friends, and when Rana agreed to travel with Astyr, she proved to be a very handy friend to have around.

Rana and Astyr tend to get distracted by different things from world to world, and don't tend to interact much except to show each other what cool and fun things they've been up to in childlike glee. On occasions where Rana has been upset or scared of/for Tenge or Sydney, Astyr has been a source of consolation for Rana.

When Astyr regained control of his body and deduced that Rana was never actually bound to him, his confidence in their relationship also suffered, and now he wonders how much agency he had. Though how and when he'll bring these up is yet to be seen.... 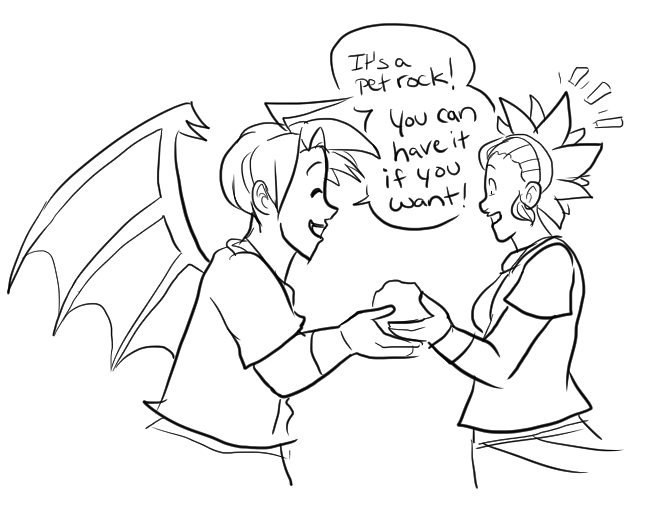 When Rana is upset or senses someone else is, she really likes to hug. Astyr loves her hugs, and is also happy to comfort her when she wants to be held... but he also found out that she's extremely ticklish on the scalp and will scruffle her hair sometimes to get her to laugh again. He hates it when people he cares about are sad.

Rana holds and touches things a lot by default because she has a lot of positive feelings tied to working with mechanical objects. With Astyr, this takes the form of hand-holding. Astyr likes it, though doesn't often initiate physical contact himself.

One of Astyr's default expressions of caring is giving gifts (usually something he's made with magic, but also cooking and stuff he's found elsewhere). He does this a lot with Rana, who responds positively to it. She will often overlook the irresponsible means by which he acquires things. Because of her sheltered background, she is also easily impressed by cool and new objects she can study.

Astyr and Rana are both distractable and conflict-avoidant, so serious conversations and confrontation are almost non-existant between them. When they're getting along, it's great, but this might become a problem if they run into issues they can't ignore... 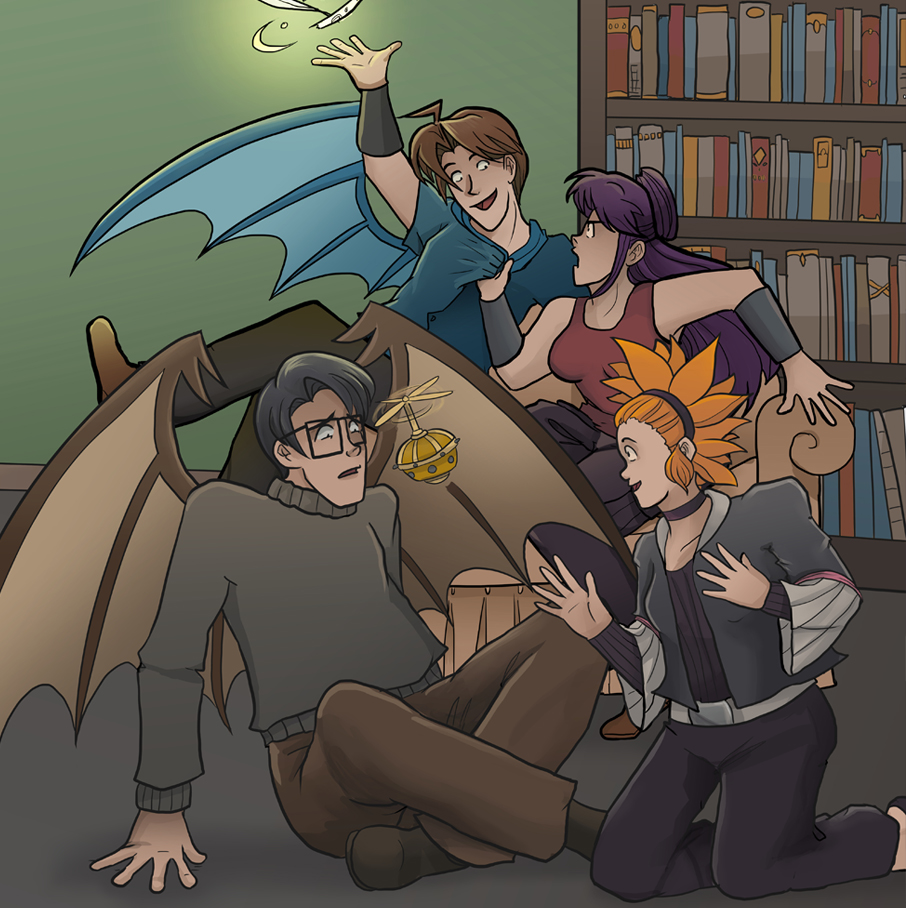 Rana's kindness is unlike anything Tenge's ever experienced. Maybe the only kindness?

Tenge and Rana met when Astyr brought Rana to Tenge's house. As so often the case with Rana, her kind and compassionate nature captivated Tenge, and his social anxiety was obliterated.

When Rana sees Tenge without his glasses, she notes his similarity to the Morphid she had seen on Goddessflight, and he admits that he is half-Morphid and views himself as dangerous. A particularly heartwarming hug and reassurance from Rana that she trusts him despite his Morphid heritage.

As dangers mount not only from Morphid invasion but the Queen's Consulate, Tenge begins to grow skeptical of Rana's trust in others, eventually trying to cut her ties to her friends and keep her locked in her workshop for her own protection. This backfires, and Rana pushes Tengeaway with some strong words about how he doesn't listen or trust anyone else. Hurt and stunned, Tenge is left to contemplate Rana's criticism. How their relationship will pick up should they see one another again is yet to be seen. 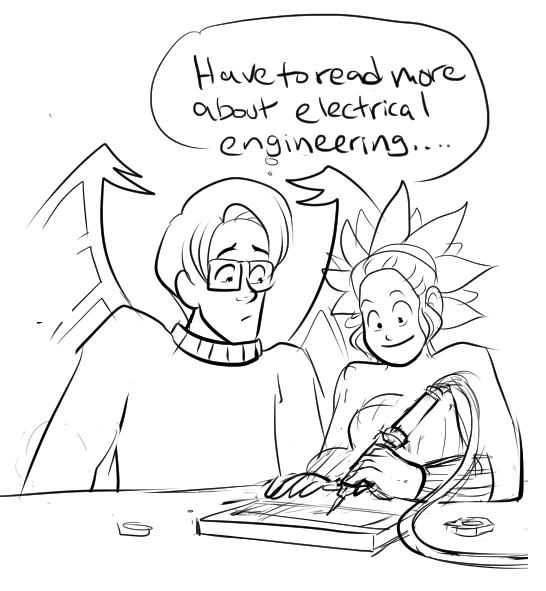 Tenge tends to split off more when he's dealing with difficult situations. There's a power in physically/psychologically making yourself bigger in a space. One indication about his level of affection for Rana is that he "consolidates" around her; it's an act of trust for him to interact one-on-one.

Rana's base level of touch/holding focuses on the chest area when she interacts with Tenge.

A lot of Tenge and Rana's socializing happens over the workbench. Since Tenge has been able to study many things with his duplication abilities, he's actually got enough mechanical knowledge to be a help, and Rana appreciates the more advanced shop talk that she can't have with Sydney or Astyr.

Tenge feels a compulsion towards control with Rana as his form of protecting her. This makes Rana more guarded with Tenge than she is with Astyr or Sydney, who respect her desire for freedom and fear of being trapped again.

Tenge is also hungry for social interaction in a way that Rana is not. He fixates on her to some extent because she's one of the only positive relationships and breaks in monotony he's comfortable with. Maybe he just needs to get out more...

Cioara can't touch Rana without cracking, and this makes her feel extremely uneasy and suspicious. Cioara keeps trying to reason that it's nothing, but she can't shake it....

After the artifact disguising Astyr's wing came out, Cioara disclosed her location on Dias Onda and Astyr and Rana met her at a Wingbucks. Cioara was initially happy to meet Rana, but quickly became suspicious when she found that touching Rana made her instantly form cracks and a containment artifact got set off in Liesel's hangar, both indicating that the essence of what Rana touched was being destabilized. Later when freeing Astyr and Sydney at Dias Korgan, Cioara brings up Rana's effects on her.