After reading almost 300 articles, I have a lot of people say "I don't think I could ever do that!" "Huge respect for all the Judges"   How about I break down just what I ran into while Judging?   For reference, the prompt I judged for Summer Camp 2022 was "A Settlement that Leads the Known World in Something." You can see the list of entries HERE! 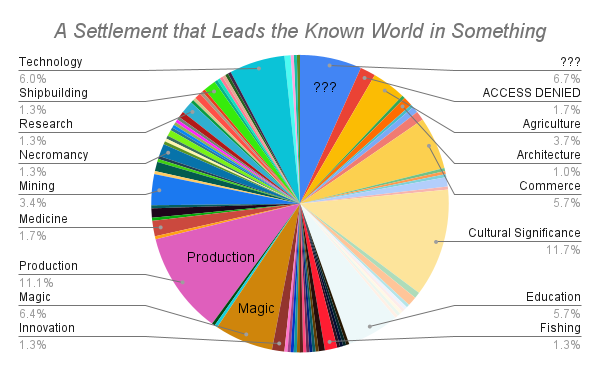 by TinkerTech
There's over 60 categories, and that's AFTER I narrowed and simplified a lot of them.

The Top five Categories were:


In My judging process, I did my best not to look at page formatting, art, or bbc coding. They're great accents, but I didn't want a beautifully written article to get tossed aside because its author didn't have the know-how or time to make the page pretty.

The Primary Criteria for my first round was "Does this settlement have a clear 'lead' point, and does it meet the word count?" As I narrowed down the entries in my second round, I paid close attention to more minute criteria. I considered aspects such as "Does the settlement currently exist" (Which I can't believe I had to ask) and "Are there other settlements in the world that also specialize in X?" (Because in order to lead the world in something, there needs to be more than one participant in the race.) Probably my most difficult decision was whether a 'District' of a city counts as a distinct settlement. I finally decided it would count if the 'District' could survive as its own settlement away from the main city.

??? Means I genuinely could not tell what the settlement was supposed to lead the world in. I'm a bit dismayed that there were so many.
'Cultural Significance' was my 'catch-all' category for settlements that either were generic world-leaders, or lead in more than one or two categories, or just hard to sort otherwise, or if the settlement didn't really lead in anything at all, at least that I could glean easily.

There were Three different settlements that specialized in Music!   There were Five articles that I could not access! No Multipass for me!   There was One Article that vanished off the face of the planet!

There were Thirty Four Articles that ended up being ineligible, usually for low word count!

There was One Article that was a blatant rip-off of Haven City from Jak II. They thought I wouldn't notice, but I did!

...You're going to have to wait until after my computer break for this one. My butt's starting to hurt and I have a yard to weed.

Thank you for your effort to sponsor a prompt for SummerCamp!