You're travelling to Zatas along the Darkwater Road when you come upon a merchant. It's rather convenient, as you didn't properly account for how winding this road was, so you ask to trade some interesting items you've collected for some additional money for lodging.   The merchant obliges, and he begins making a verbal calculation of how much it costs in something called zalmonsen. You ask what zalmonsen are, as you've never heard of it before. It is not a strange local food, as you expected, but rather a kind of currency.   "Eet's, um, what you call a 'standard currency.'" he explains in his heavily accented Common. "That way, I can use it any place I go." He shows you one of the coins, and it appears to be made of silver. You ask nicely and take it from him, but it's much lighter than silver. Steel, then. Steel coins. You hand it back while he finishes his calculation.   After a few minutes, you get a few of these steel coins, although you still have no idea who would take them...

Steel standards look like and are shaped similarly to other kinds of coins. They are small coins with considerable weight from their steel content. On one of the faces is the dragon-headed crest of the Iron Merchants, and the reverse shows a cart drawn by five horses, one for each of the five Sedestan nations that use the currency.

While the idea of an international currency was gaining a lot of traction in mercantile circles in the late Third Era, it was difficult to find a suitable group to mint them. Perhaps to get ahead of the trend, perhaps because of rumours of new markets beyond the Thousand Stars, the Iron Merchants first began minting the Steel Standard (or "ss" in their logbooks) just before the Drowned Years.   The Steel Standard was initially used only for transactions between guild members, but after a few decades, the coin was released to the general trading public. At that point, a standardized exchange rate between various Sedestan currencies was a fool's errand; every town and city's moneychanger had a different idea of what another nation's copper coin would be worth in their nation. The Steel Standard was released with a clear guide of how much other currencies would be worth in comparison to it, which struck a chord with many mercantile organizations.   The discovery of Kerath changed the game yet again. Here was a whole continent of people who had never had experience with the intricacies of Sedestan history and trade, and so the Steel Standard was a great way to conduct trade with them. It indirectly cut down the weight of boats as well, as Steel Standards weigh much much less than gold or platinum coins and were worth more. This in particular has made them incredibly valuable among the merchant families of Niganta and other trade hubs.

Economically, the Steel Standard is still not heavily utilized as a whole. Only a small elite among the world's merchants are members of the Iron Merchants and an even smaller number do regular business with them. The Lorian golden suns and platinum dragons are still the most recognized currencies across the world, and the ones that the vast majority of international tradespeople encounter. Part of this stems from their creation and promotion by a non-national bank, and a fairly elite one at that.   From a cultural standpoint, despite the proclamations of solidarity and unity that followed its creation, the coin is still distrusted. The major governments of the world often owe money to the Iron Merchants, so they have a tendency to distrust users of the coin. The Empire of Quempo is the biggest example of this, as they owe the Iron Merchants trading favours and other political favours in addition to owing them money. Regular merchants, though, don't see much wrong with the Steel Standard, and many prefer the coin over holding several different kinds of currency. 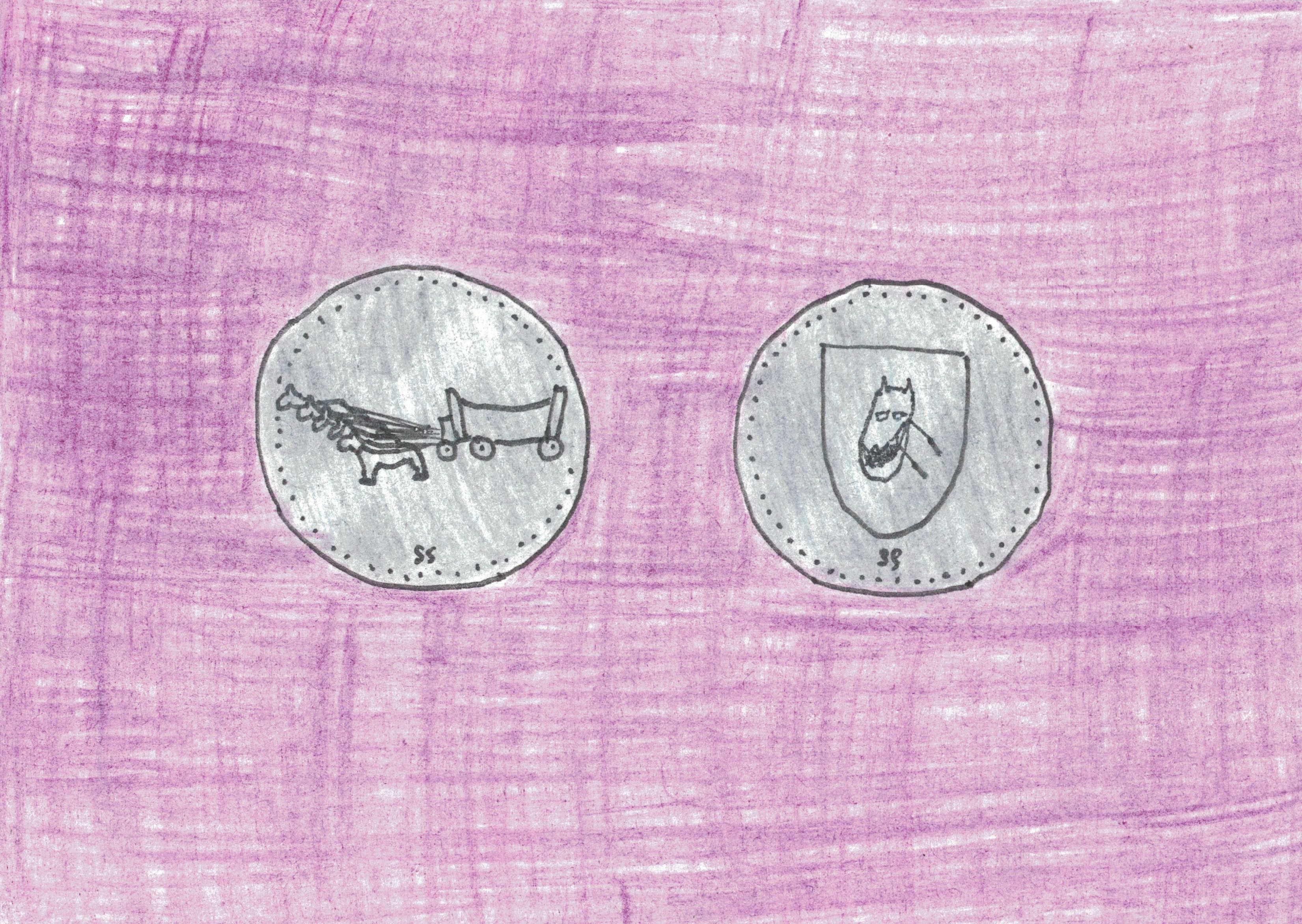 Steel Standards are made from specially treated steel in order to prevent rusting or defacement. A few of the most recently created coins have also been made with magical markings to prevent counterfeiting.   One of the Iron Merchants' major banks also doubles as a mint for these coins. The hot steel is poured into molds and carefully cooled to prevent damage to the coins, then distributed to the members of the guild. They then conduct their business and spread these coins throughout the land.

One Steel Standard is worth the same as:
Art Credit: emperorcharlesii (me!)