You're spending the night in an inn along the road to Loria. You decide to stay and talk with some of the area's farmers and villagers. You get an ale from the bartender, and then you sit down with some locals. They're playing a card game as you sit down, and one of them asks in Lorian if you want to join in a game of No Takers? You've played this game before, and you accept. A hand is dealt to you as the locals complain about the poor wheat harvest and the rainstorm the other day.   You listen along as the game goes on, learning and enjoying the company. You win a couple of hands, lose more, and share in a few laughs. You remember that this is the life of the average person; simple pleasures like a card game to pass the time after working the land...

No Takers? is a game about collecting desirable groups of cards called “sets”. You will gain, lose, and save cards throughout the game, trying to get and keep very desirable sets until all of the cards are in play. At that point, the game ends, and the cards in your hand and in your save pile are divided into sets. Whoever has the most valuable collection wins!

Shuffle the deck well. The deck is split equally in half by a designated dealer. From one half, the dealer will deal a hand with an equal number of cards to every player. If any cards are left over, they are added to the other half of the deck, which becomes the draw deck. Starting with the person to the dealer’s left and continuing clockwise, each player takes a turn until the end of the game.

On a player’s turn, they can take only one of three options:   The sole exception is if a player starts their turn with no cards in their hand; in that case they draw as if they have taken the Draw action and then take one of the three actions (including the Draw action again if they wish).

If you choose the Draw action, you will draw a number of cards equal to the number of players and then your turn ends.

If you have a desirable group of cards and you want to make sure that you have them at the end of the game, you can Save them. You must save at least three cards, but you can save any number of cards from your hand.

If there is a number, suit or specific card that you need to complete a set, you can take the Ask action to demand that card or kind of card from a player.   If you are asked for a card (or kind of card) and you currently hold a card that fits that description, you MUST give it to the asking player. If you have multiple cards that fill that description, you must give at least one but you choose which ones and how many.   If you do not have that card, you must declare “Pass” and the rest of the players must give a card if they have it.   If no player has a card that fills that description, then there are No Takers. The demanding player must then give each other player any card from their hand of their choosing.

End of the Game 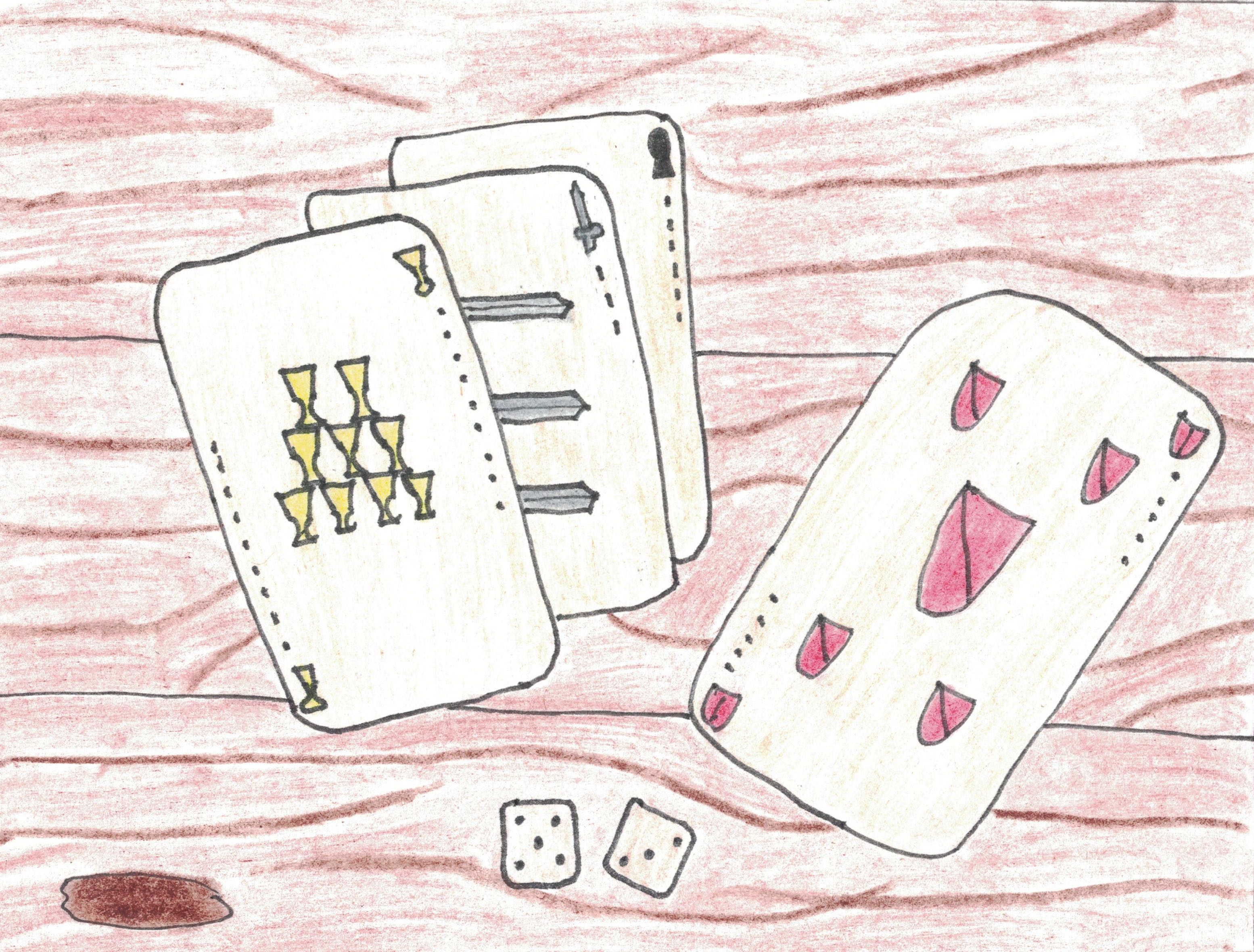 All that's needed for this game is a deck of playing cards and any money for betting (if betting is desired).   Note: Sedestan card decks contain 52 cards of four suits, consisting of cups (yellow), swords (grey), skulls (black) and shields (red). Terran Humans thankfully use a similar set of playing cards.

The card game has been played in taverns and inns across Sedesta since the early Third Era. Before that, similar card games existed, such as Fisherman and Bluffer's Hand, but this one has definitely become the popular choice.
Art Credit: emperorcharlesii (me!)

Any comments regarding the rules set would be incredibly helpful! Also, if you play this with friends, feel free to tell stories about your games!