You wander the streets of Siltaj, curious about the ores and minerals on sale in the homeland of the weddelar. You wander between various stands and peruse, looking for the gems, and you see many different diamonds, emeralds and sapphires.   One stand gives you pause. You almost look over it, assume the rocks on display are regular geodes and quartz, but then your eye catches one particular design. It has a bluish tint, and you recognize the arrangement of gems from the dwarven wizard who accompanied your caravan from Voldawë. His staff had the same gem at the head.   “See anything ya like?” the young dwarf says from behind the well-made wooden table. He has soot all down his brown shirt and some of it has landed on the table in front of him. “These are all called for, unfortunately, but if yer looking for a prismatic, the ones from the Zorash Mines are unequaled!”   You nod. “What’s a prismatic?” you ask.   “Well, nothing but the best kind of spell focusers that you can find in these parts!” The dwarf gets very excited. “The best staffs and wands in the world are made with them, especially the fancy enchanted ones! You thread a spell through that like a needle and bam! You can cast some powerful magics in a snap!”   “How expensive are they, usually? I’m not buying,” you immediately add, “but I am curious.”   “They usually run about 250 gold flors, but they're not much use without something to hold them with." He chuckles in reply. You act exasperated by the price and leave the market, but really you're just astounded that you even saw one at all.

The physicality of a Crystal Prismatic is not unlike a quartz-like gem or a geode. It grows a variety of small, otherwise uninteresting crystals deep underground, and close inspection will show them to glow very faintly when placed near sources of magical energy.

Cut Crystal Prismatics make excellent Magical Foci due to their ability to amplify magical effects and direct them. Measuring 95/100 on the Doroboros Scale, only Elemental Motes and Remnants of the Passing could possibly make better foci.

This mineral is usually found deep underneath mountains and volcanoes, in small open caverns filled with long spikes of crystal. As most of the mountains of Orkanis are not very tall or have a very minimal weddelar or smeloplar presence, there are not a lot of prismatic mines in the world, and caverns can contain...other creatures as well.

A few mining families in Siltaj and a couple of the holds in the Kral-Dogash are the main suppliers of the mineral. They make trade with wand-makers and staff-makers across Orkanis often get in touch with these suppliers directly to buy this product.

The sale and trade of Crystal Prismatics is very carefully guarded. Only a few wand-makers and staff-makers are trusted with this powerful material and they are carefully vetted and monitored by the governments of the nations in which they reside. Any irregularities in shipments or missing shipments are rigorously investigated, and anyone caught with these minerals without permission will be imprisoned. 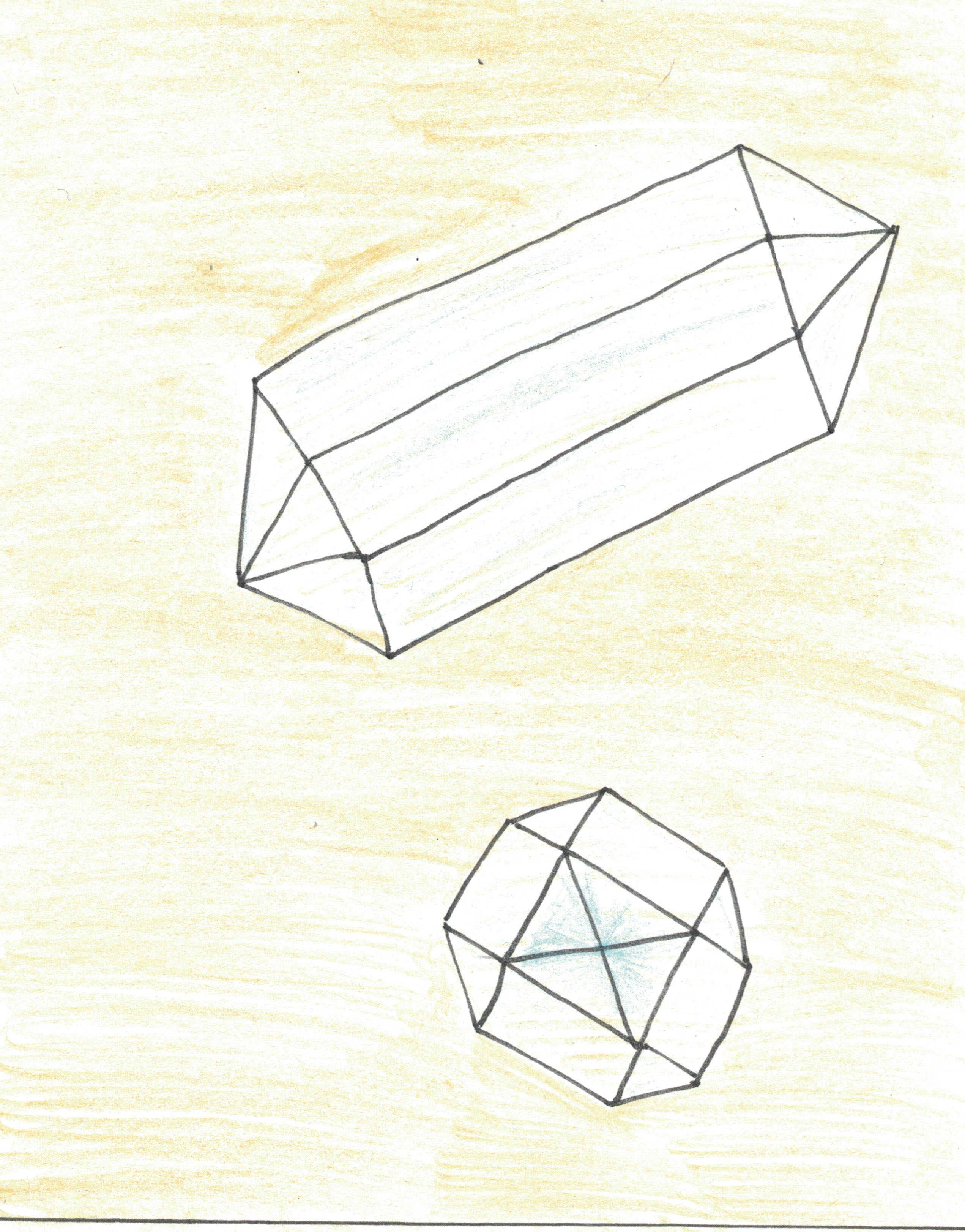 An example of the shapes that cut prismatics can take.

The raw crystals removed from mines need to be cut in order to remove surface imperfections that could cause misdirection of magical energy. This also serves an aesthetic purpose in making them much more beautiful or desirable. But it also carries a danger due to the creation of Crystal Dust, millions of small, often sharp crystals left behind by the refinement process.   Beyond their sharp points, and much like the dust created from cutting Elemental Mote, Crystal Dust is potently magical and therefore very dangerous if handled improperly. However, if carefully collected and kept in a safe place, the dust can be used as an ingredient for magical inks or magical chalk.
Art Credit: emperorcharlesii (me!)