Dreandril is a world in constant conflict. Every little nation is at the throats of its neighbours, and what little peace there is is either hard-won and/or fleeting. Espionage, backstabbing and corruption is the name of the game. But the region of Lake Nith is a surprising area of relative calm, and the people of the region have Matlok Artaka Haniparal Virasgupi to thank for setting the example for the future generations of Alkaner.

I know that our world is one of war and devastation, but that doesn't mean that we have to ignore the power of peace.
— Artaka Virasgupi

It's a cliché in many cultures of the multiverse, but Artaka's road to leadership started with her as a farmer. While her family was one of the major families in the tight-knit community of Indaghabi at Lake Nith's northern shore, she and her siblings were still expected to help with the harvests and canal-building needed to keep the farmstead productive. She grew up with a deep connection to the land and its people, appreciating the lake for all it gave her people in the past and what it will give to her people long after she has died.

Being the youngest daughter in her family, she didn't expect to get the same kind of treatment as her elder siblings. Sure enough, she watched as her brothers and sisters got older and took on the responsibilities of her ailing parents. In particular, her eldest brother Hano was clearly groomed to take over her mother's post as Matlok after her eventual death, but Artaka matured quickly. She demanded to be given the same treatment as her brother, which angered Hano so much that he was ordered to take a walk in the desert to check his pride.

It all culminated in one big shouting match just after I became of age. Hano nearly broke the stump we were using as a chopping block when I mentioned that I had wanted to be Matlok. I couldn't imagine at the time whatever could have been so wrong about the thought, but the following morning, he had gone into the sands as a penance at my mother's orders.
— Artaka Virasgupi

Hano never returned from his punishment. Artaka's parents assumed he died, but the guilt was so consuming that she often went on walks into the desert herself. Whether she had hoped to find him alive or dead, she still has no idea, but it devoured her free time. People in the homesteads complained that they missed her singing, or whenever she did perform, it was rhythmic wailing instead of music. Even after his disappearance, his shadow still lay over her.

It was two years until Hano was finally found. Naturally, Artaka was the one to find him. Vultures had long devoured his corpse, and it was only a distinctive grey leather pouch with eagle's feathers that identified the remains. Artaka's family said that she wept for a week straight, refusing to do anything until she had finally mourned whatever he had been for her. Even once her grief had run its course, she was forever somber and never sang a note. Even her wedding day, usually a jubilant affair, felt tense and sorrowful. 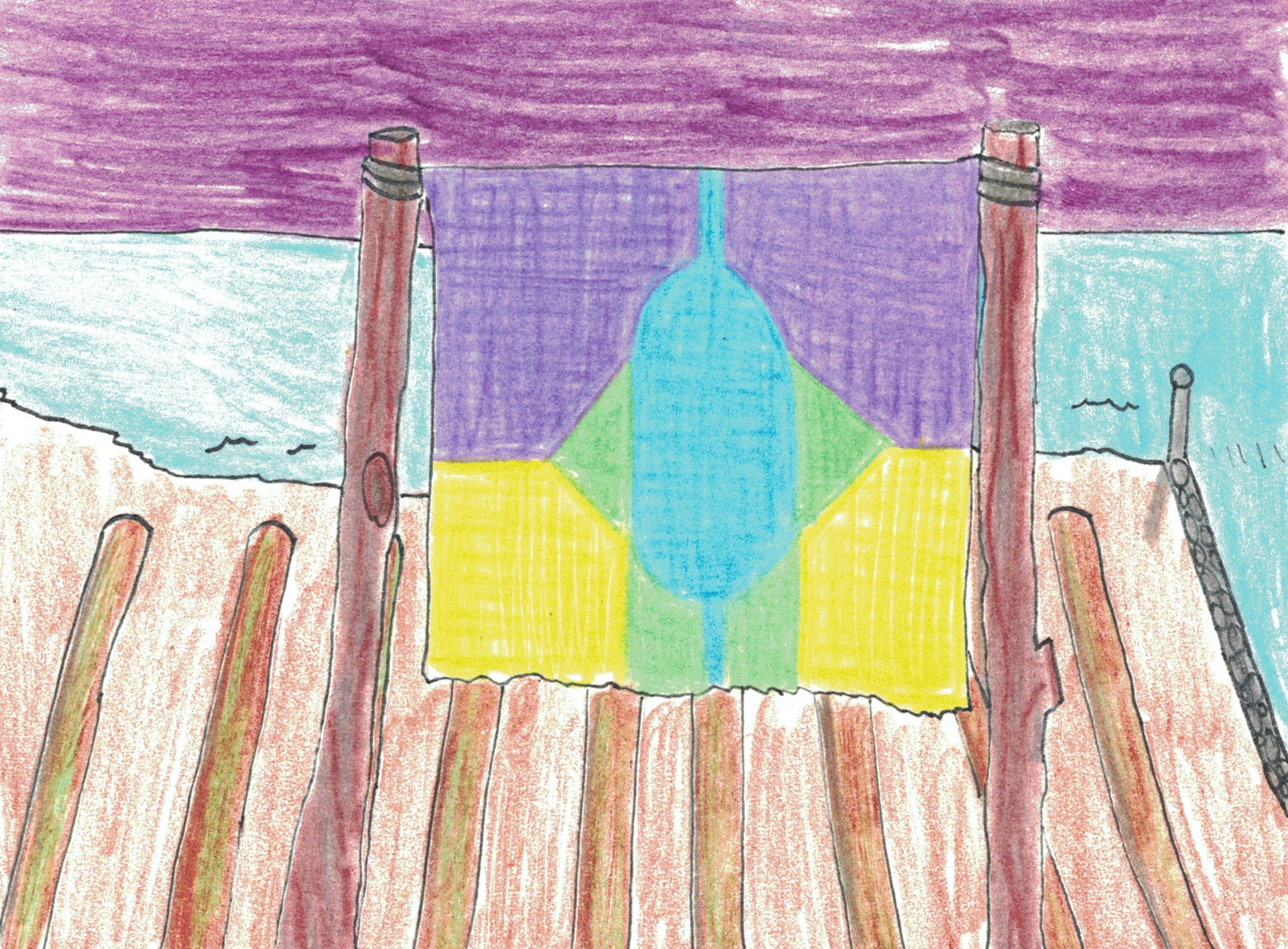 Years of horrible silence continued until she was elected to the position of Matlok in her thirty-fifth year following her mother's death. She wore the red and orange clothing of her position well, and while she tried to put up a brave face, her husband claimed she never smiled once they were away from her people. The birth of their first child was fanfare-less, and much the same for the second, and the third. While it was normal to grieve the death of loved ones, this was hardly the normal length of time for anyone.

Some claim that the Alkaner goddess of water and mourning, Shena, visited Artaka in the depths of woe and raised her back up. Others say that she finally got over all the guilt and grief that had dogged her for her whole life. Whatever happened, Artaka refuses to talk about the night, and when she went among her people the next day, she said that she could now do feats of magic.   From that time on, Artaka seemed much less depressed. This isn't to claim that her mournful state completely disappeared or that it "cured" her; on the contrary, she still often has days where she feels particularly afflicted and refuses to see people. But the arrival of her magic seems to reduce the depth of the emotions she feels to the point where she can function more or less as she wants to.

A few years ago, Artaka's father suddenly caught a deadly disease, alongside many people in her village. Artaka immediately investigated the area, discovering that the source of the infection was one of the three small streams that fed Lake Nith near her hometown. Something was causing the water in the region to smell foul and have a strange slight green colour to it, as well as flow much more irregularly than usual. While she immediately got the farmers and herders of the area to stop using that particular stream for water, the damage was already done. It wounded her when it began to hurt her people; it nearly killed her when the sickness claimed her father later that year.

It would be so easy to romanticize our trudge through the scrublands of the riverlands, but it was dirty and tiring work. It was worsened by the fact that we had to use other sources of water than the one we were following.
— Artaka Virasgupi

After nearly two weeks of travel, the band arrived at the base of the mountains and discovered the source of the contamination. For a large stone wall blocked off most of the river's flow, and a long tube pouring green sludge was pouring straight onto the mountainside. The smell was so appalling at this point that the group travelled around the river to the base of the wall. They had begun to see if there was some way to bring down the structure when the builders of the wall arrived.

The people of the area were of another species, the Stalwartkin, and they lived in the small caves that dotted the side of the mountain. These Stalwartkin built the dam to make sure that they could do the industry that kept their town afloat: refining of ores. Stalwartkin towns and cities from the nearby mountains sent their metallic ores to the city to be broken up and reduced down to the workable metal. The process took a lot of water, so they damned up the river to make sure they always had enough. The water from the process was disgusting and undrinkable, so they unthinkingly dumped it back into the river.   Artaka immediately got an audience with their lord, and the two had a very tense negotiation. Artaka could have decided to attack first and ask questions later, and considering the relative weakness of the Inqeo, she could have gotten away with it too. But like the utterance that crowns her story, she decided to believe in the power of peace. So she got the lord of Inqen to agree to not dam the river so harshly and to dispose of the wasted water from the Stalwartkin refineries in such a way that they did not contaminate the water.

The change was so immediately, it was like night and day. The river seemed to clear as they began the long trek home. By the time they arrived home in Indaghabi, the poison seemed to have lifted completely and her people rejoiced at the safe return of their beloved leader.   That year's crop was one of the best that the village had enjoyed in decades, and Artaka's stellar leadership played no small part in this success. While a small number of her people had died from the illness, they now knew peace and had allies among the Stalwartkin of the mountains. While the threats to the waters of Lake Nith had not ended - other villages were having similar stories of dammed water and strange poisons in their wells - the people of Indaghabi were delivered from evil. 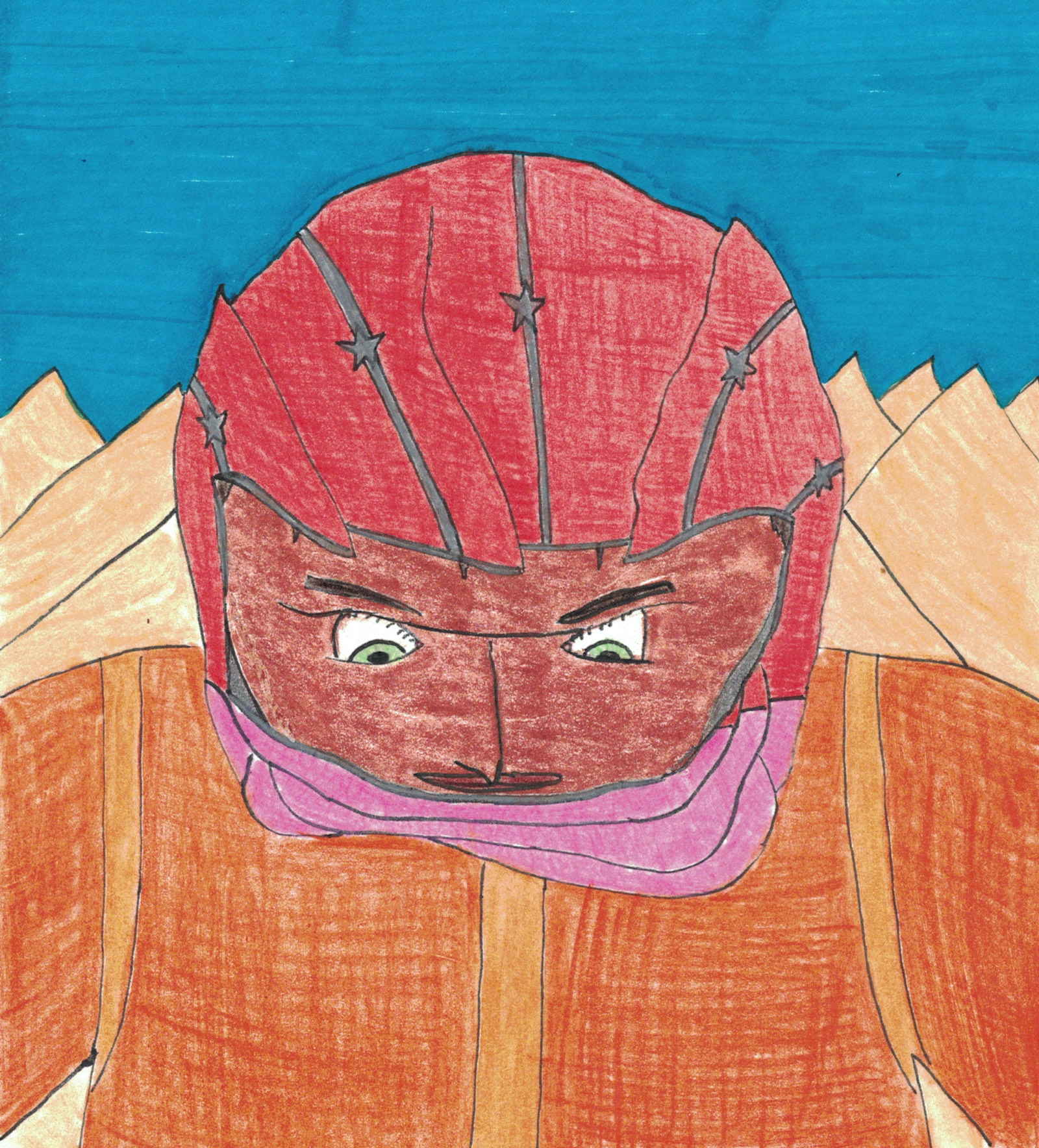 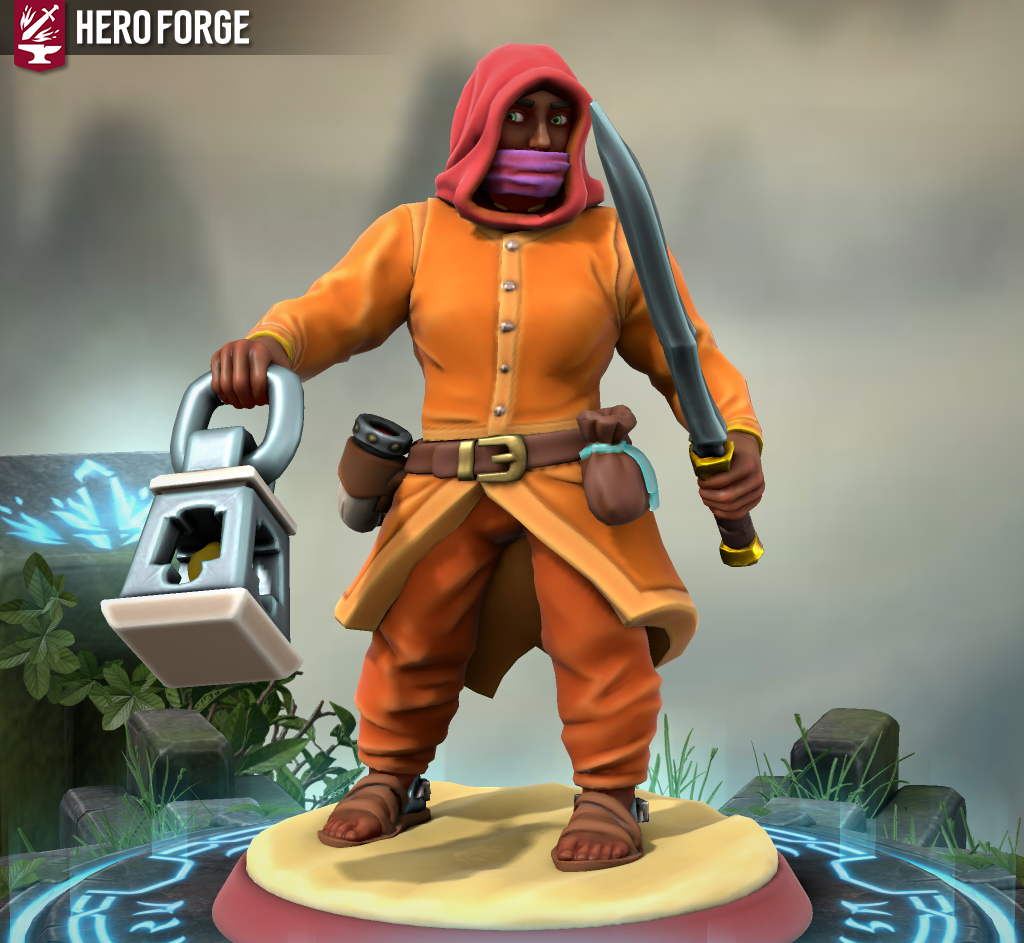 A representation of Artaka on her greatest quest, created using HeroForge. Click on the figure for more information on HeroForge.

Most mages have magical power that ebbs and flows with their emotional state, but Artaka's abilities are much more susceptible to her mood than most. It manifests unconsciously around her when she gets angry or sad, causing the mood of others around her to be affected. If she's sad, a somber sobriety settles on anyone she speaks to. If she's aggressive, an impulsiveness and confidence appears in the eyes of her people.   This is often cited as a reason for her incredible diplomatic ability; if she can help people empathize with her at the height of her passions, the negotiations will go more smoothly and more in her favour. At the same time, it is clear to people that this effect is not something that she enjoys or purposefully cultivates for herself. If anything, she would like to have never gotten involved with magic in the first place.
Magic...bah! Every person who gets by in our world without ever so much as looking at a potion are the real heroes. If it were up to me, I'd have given it to someone who actually needed it.

Artaka, like many Matlokane, wears a traditional headscarf to keep away dust and also to denote her rank. Hers is the same one that her mother wore, which is of a bright red colour - for the rich red grapes that her region is known for - and festooned with the five stars of her family. Unlike her mother's original, though, the bottom half of the headscarf is pink, the traditional colour of mourning. In this way, she claims, she can carry her parents' and her brother's memories with her wherever she goes.

What a well thought out hero with a solid backstory. That's so heartbreaking, to lose her brother like that! Guilt is a difficult thing.   Did any of the other villages try to bring her in to help them with their own poisoned wells? I am assuming it was the Stalwartkin disposing of their waste in other ways...

What a heartbreaking way to lose your brother. I'm not surprised she carried the guilt of that for a long time.   I like all the little details about her culture that you've woven into the article, including the portrait at the top. Really well done. Looking forward to seeing more stuff from you! :)

Nice article! I like that you do your own artwork as, compatibly with work, I try to do. Could they be better? Of course, but I prefer to have my stuff and we can get better with practice and confidence, so please stay confident! The side panels are very well done!