What keeps the City of Doors safe and functioning? What maintains order and refuses to allow Sigil to tumble into chaos and anarchy? The answer is simple, yet surprisingly complex: Her Serenity, The Lady of Pain.   The Lady of Pain isn’t a woman and isn’t human. Although theories abound, the truth of the matter is no one knows who or what The Lady of Pain actually is. She exists. She has an enduring connection to Sigil. And she stands as the law and the power in the City of Doors.   Some believe she is a god, but no pantheon claims her as a member. Some think she must be a demon prince or a devil lord, but others find that idea unacceptable. One or two ancient texts identify her as the embodiment of Sigil, or even as a proto-entity from the time before time. Most Visitors and inhabitants don’t really care one way or another. The simple truth is that The Lady of Pain exists, and that’s all that matters.   The Lady remains distant from most of the day-to-day activities that take place in Sigil. You won’t find a castle, a palace, or a temple with her name on it. Indeed, if anyone worships her they usually end up missing (presumably to be banished to the Mazes) or turn up with their skin flayed from their bones. It is widely known that she accepts no prayers or sacrifices, and she reportedly punishes or destroys those that make such offerings.   The Lady of Pain never speaks. She never participates in council meetings or guild discussions or judicial inquiries. When she appears, she is seen drifting down the cobbled streets, her gown barely brushing the dusty surface as she passes by. Those familiar with the ways of Sigil know enough to move on during The Lady’s sporadic forays through the streets. Anyone who has had the bad sense to try and interfere with her passage receives painful gashes from her penetrating gaze.   Such appearances, rare and memorable though they might be, eventually end when The Lady passes through a wall or simply fades into nothingness, vanishing from sight without word or warning.   What is The Lady of Pain? She is the impassive protector of Sigil, inspiring awe and fear with her very presence. No one deals with The Lady. She doesn’t give missions or serve as a patron. She makes no proclamations and issues no edicts. She is just the wonder and mystery and danger of Sigil made manifest. But she does have laws-or, at least, certain truths about Sigil are credited to her will.   The presence of The Lady keeps all inhabitants and visitors in line, making Sigil more or less safe for conducting business of all sorts. She keeps gods and powerful entities out of the city. She prevents teleportation rituals and other magic from penetrating the borders of the City of Doors. She oversees the dabus that maintain the city. And she creates the Mazes that serve as the most prominent deterrent to conquest and chaos in Sigil-and which give the city its other name, the Cage.

When a significant threat to Sigil appears, it doesn’t last long. Powermongers, rabble-rousers, and malcontents who flaunt their ambitions and disdains quickly find themselves banished to the Mazes. These pocket dimensions swirl into existence to torment a single threat, whether that threat is an individual or a small group of conspirators.   Each maze appears as a small part of Sigil, such as an alleyway, courtyard, or cul-de-sac. This copy becomes a twisting labyrinth that has no beginning, no end, and no obvious exit points. A targeted individual might step through an archway, turn down an alley, or pass through a door in his or her own house and suddenly be spun into a newly created maze.   In a maze, a trapped individual doesn’t starve or die of thirst: Food and drink appear at regular intervals. Each maze contains one hidden portal that can be used for escape. The prisoner just needs to find the door, and then determine what key is required to open it. For most, this possibility of escape is just a cruel hope that taunts them but never materializes. Every once in a great while, however, a prisoner finds a way to get out.   Of course, many disappearances that are blamed on the Mazes have no connection to these pocket dimensions at all, but such is the nature of life in the Cage. Those taken by one of the Mazes might eventually stumble out of their prison, chastened and changed, but most are never seen again.

The dabus are a race unique to Sigil and are the personal entourage of The Lady of Pain. They are humanoids with white hair, goat-like horns, and yellow-tan skin. They floated inches above the ground, their feet never touching the earth.   The dabus spoke only through visual rebuses, with symbols that materialized and filled the air above their heads. They could understand spoken language, however.   The dabus report to and follow to the letter the unspoken orders of The Lady of Pain. They are routinely found maintaining the city of Sigil, building walls, destroying buildings, paving streets, maintaining portals according to The Lady's wishes. Despite the dabus' patient nature, interrupting or standing in the way of their work is a risky affair that may land one in one of The Lady's mazes. 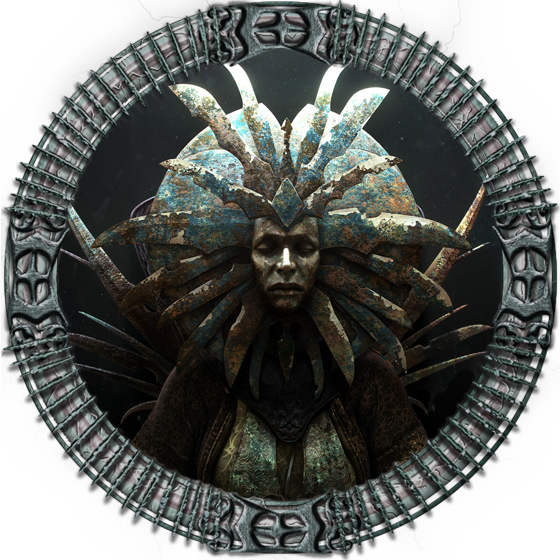 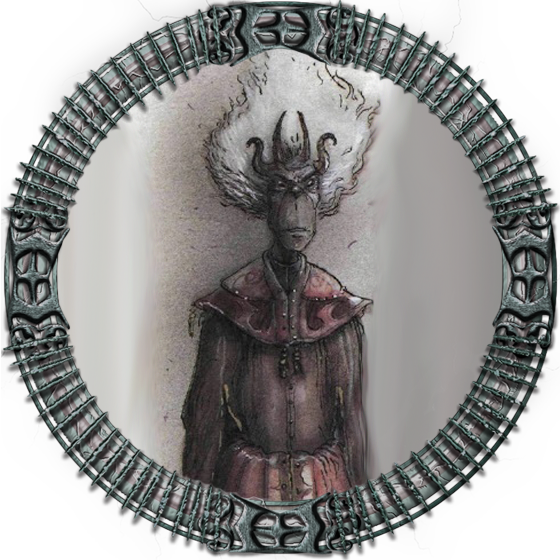 Remove these ads. Join the Worldbuilders Guild
Sigil, the Cage, City of Doors