The city is located in a narrow valley in the mountain range known as the Vale of the Spine. The valley is barren and deserted and surrounded by two ridges of steep mountains that arched inwards, resembling the ribs of an enormous creature. Moving away from the city, the mountains became less steep, acquiring a more angular and cubic shape toward Rigus. The Vale extended from the edge of the Outlands spireward until near the River Ma'at and is surrounded by dusty plains.   The city occupied the entirety of the valley. All passages to the mountains were closed off, so the only way in or out of the city is through its iron gates, located on both ends of the valley. The valley is made of red dirt and the rock a deep mahogany.

Ribcage is ruled by Lord Quentill Paracs and a council of five senators. Paracs hides his authoritarian tendencies and political ploys behind the illusion that the council could overrule his decisions, although he made sure to have a sufficient number of them held in his favor at any time through bribery and threats.

The majority of Ribcage's population consisted of tieflings, but also included humans and other humanoids, bariaur, githzerai, and a few other races. There is a surprisingly small number of devil inhabitants, due to the council's policy of keeping them out. This policy is part of an effort to prevent the city from shifting its alignment too far into lawful evil, which would incur a risk of it slipping into Baator and becoming a part of it.

The only militia in Ribcage is the feared Blackguard, household guards of the Baron. The guards are easy to spot, clad in some of the best ornamented plate that could be forged in the outlands. Most folks fear them because the Blackguard has nearly unlimited powers. They can arrest anybody for any cause they care to invent, and any matter of disrespect is enough to find yourself hanging from the tormented gate.   The best way to stay out of Paracs's dungeons it to keep the Blackguard happy. Payoffs, favors, information.. or simply staying out of their way. Such deeds are semi-secret, as a Blackguards main concern is being charged with corruption by an enemy.

Official visits into Baator require a written pass, which is a warrant of safe passage, from one of the Lords of the Nine. The advantage of this method is that the baatezu'll not harm a berk carrying such a warrant, usually. However, getting that sheet requires difficulty. First you must have a sound reason for going (by baatezu standards). Second, you must know the right fiends to contact, often requiring a deal that does not meet mosts standards. Last, it often takes a lot of Jink to garnish the right palms.   Others who are more dangerous would visit uninvited, but this risks the wrath of the Nine Hells falling down upon them. 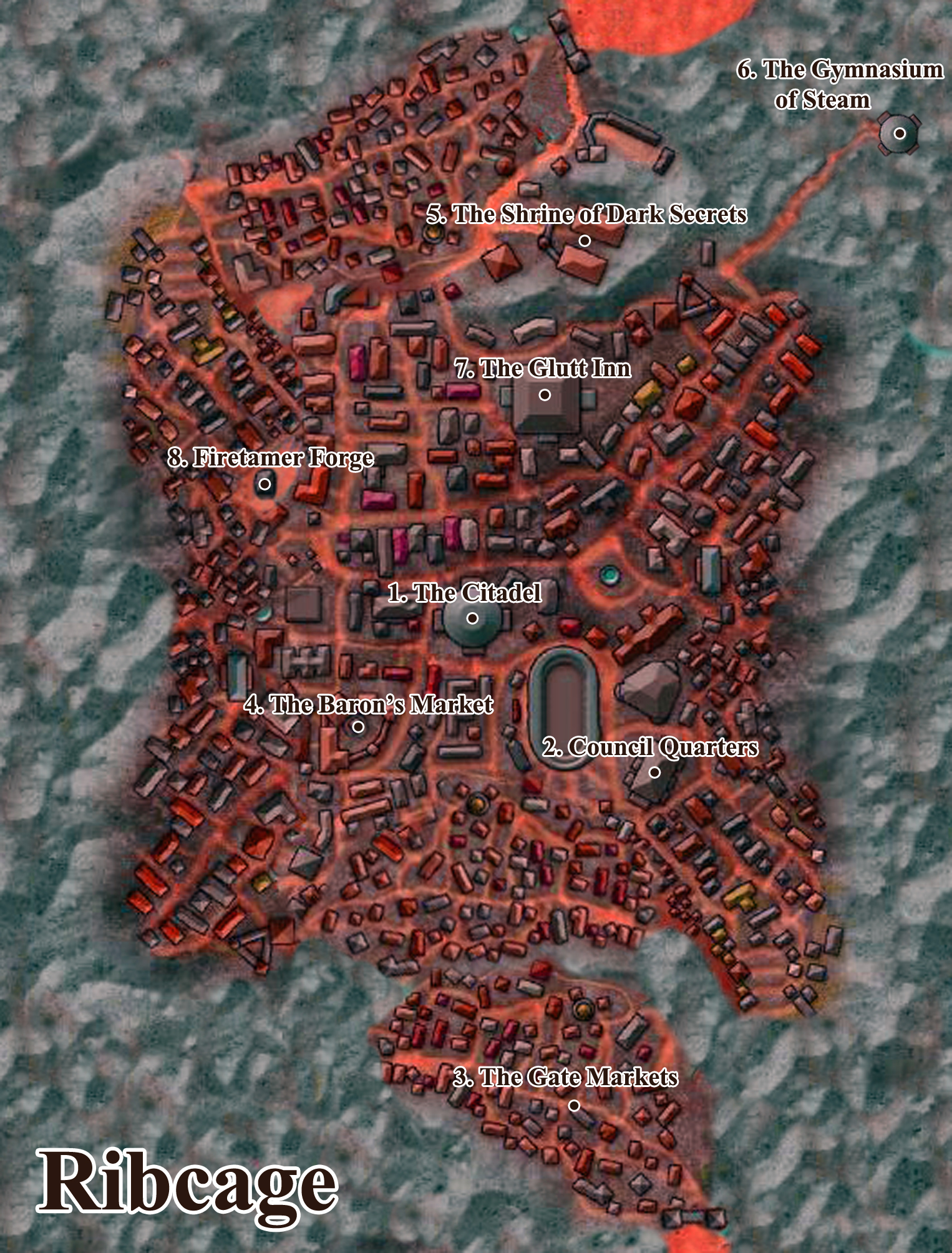 The most impressive location in town is the citadel, home of Quinteill Paracs, the Lord of Ribcage. It is a self contained city within a city, an impressive structure that all who catch a gander know it to be the leaders home. The walls are carved from solid blocks of obsidian and ebony, and its steel portcullis is laced with strange and exotic items. Its shiny obsidian is remarkable as it stands above the ramshackle red-clay structures that form most of the remainder of Ribcage. A large statue of the baron stands in the central courtyard, while elite members of the Blackguard manning the steel portcullis leading into the yard. The Baron is the only one that can hand out passes to Baator, and those wishing to pass through The Gate must deal with him sooner or later.   The Gate: The Gate to Baator is in a separate complex hidden deep within the Citadel, which means one must march past Paracs nose to find it. The gate itself is a tall, spinning pillar of red light, filled with dancing motes of silvered rumored to be the disintegrated remains of those who tried to cross the Lords of the pit. Planars call this the Cursed Gate.   Lord Quintill Paracs: Baron of the Great Pass, Guardian of the Gate, and Lord of Ribcage. Every law that's passed is loudly done in his name. Paracs makes sure the militia remains loyal to him, holds the key to the treasury, and sees that rising stars on the Council owe him for their continued success. He's master of the town because he's master of the politics it takes to rule. Lord Quintill is a Tiefling native to the outlands, a competent fighter and sorcerer that has firmly planted himself as lord of the city.

Each of the towns five wards has a seat on the council, but this tiny building shows what the baron really thinks of them. The place has the trappings of power, with a facny meeting room, lound, guards and portraits of the five senators, but the Council is little more than a tool made up of puppets whos strings run right back to Paracs.

These open bazaars are the best spots to pick up imported goods that are hard to come by in Ribcage. Considering the town is stuck in the middle of the Vale of the Spine, imports include anything that isn't made of rock. Fresh fruits, vegetables, spices, meats, ale, cloth, enterprising cutters from across the Outlands join the stalls clustered near the main gates to sell their wares.

Merchants who have worked or garnished their way into Lord Paracs's favor get to sell their wares at a special market near the citadel. Paracs, his household, teh senators and members of the town's five families usually shop here. Only those with a special permit are allowed in this walled structure. Goods at the Baron's market tend to have a higher price, but the merchants take hte risks that come with being under the nose of the town's nobility.   Dermont: The large human trader plys his wares among Sigil and the Outlands, his dangerous routes proving quite lucrative. He is looking to expand his trade into Baator itself, where valuable spices are solid in the heart of Dis. He is a lawful man first and foremost, believing ones word is his bond and not being one to entertain trickery. But he has no sense of loyalty, if someone is no longer useful to him and he owes them nothing, he will not raise a finger to help.

5. The Shrine of Dark Secrets

Even though Ribcage is the gatetown to Baator and firmly lawful evil,. Lord Paracs does his best to keep the baatezu out. He doesn't want to lose his towns to the fiends, and while a few are permitted to travel through, none are allowed permanent residence.   His biggest political enemies on this issue are the members of the Flamen family, a sect of clergy that worships the Lords of the Nine and the powers of Baator. The Flamens congregate in the Shrine of Dark secrets, a spired temple of gray rock presided over by Flamen Pontifus.

6. The Gymnasium of Steam

A bathhouse built over volcanic springs on the ringward side of the city, it is to no ones surprise that the best spot in town for relaxation isn't in the town at all. On the slopes near town are a bundle of resorts that offer hot mineral baths, the best ones called the Gymnasium of Steam. Plenty of visitors head there to soak in the soothing waters or have a parley away from the ears of the Blackguard, who tend to stay within the walls of the city.   An ordinary bath costs 50 gp, and healing baths can cost 500 gp or more. The healing baths are magical in nature, able to cure any disease of the skin.   Shandrala: The bathhouse is ran by Shandrala, a Tiefling priestess of Lakua Mao, The Red Misery. She is a member of the Fraternity of Order, and despite not being one of the five major families has positioned herself as one of the most influence people in the town. She is owed favors by nearly everyone, and has connections or knowledge of anything in Ribcage, for the right price.

Clan Firetamer are probably the most honest of Ribcages families when it comes to their money and how they make it. This family controls much of the craftsmen guilds within town, and all members of the family are trained to varying degrees of talent within one of the crafts. The Firetamer mark may be found on most of the armor and swords produced within Ribcage, as well as the artwork, stove carving and iron and silverwork common to the buildings of the town. The Iltenam’s are a quiet powerhouse within the politics of Ribcage, easily overlooked by outsiders but they are fully aware of their influence on the livelihoods of the other families, and use it when nessecary.   Ivanstran Firetamer - The clan leader, he is a once powerful Duergar who led his clan into the Outlands long ago. They carved a hold out of the rock and quickly adapted to their new environment. Over time the hold became melded with Ribcage and became a permament fixture in the city. Initially there were conflicts, but the tenacity of the Duergar quickly became a stalement, causing the lords of Ribcage to negotiate a peace. Since then the Firetamers have remained on the council and built up their power.   Firetamer Forge - The forge is the Firetamers home, carved deep into a spire in the heart of Ribcage. It is a honeycomb of caves, with numerous wards and defenses against intruders. Part of the reason for the Firetamers success is not just the trade of goods done in Ribcage, but with those in Sigil. There is a portal to the Hive District foundry found in the forge that is well-guarded on both ends. Those passing through must use the gate key, a pair of Baator Iron tongs, then click them three times to open the portal. 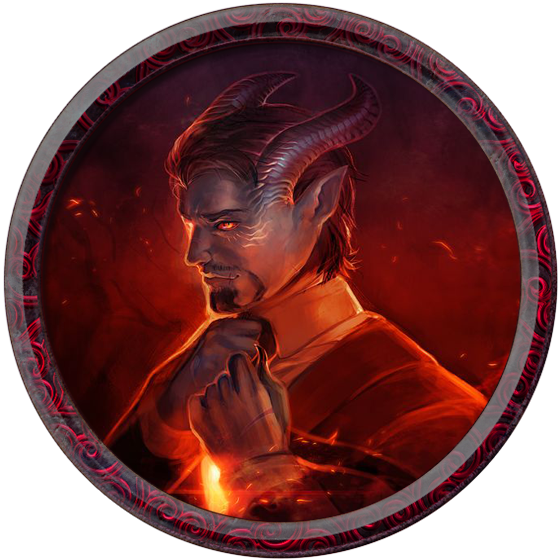 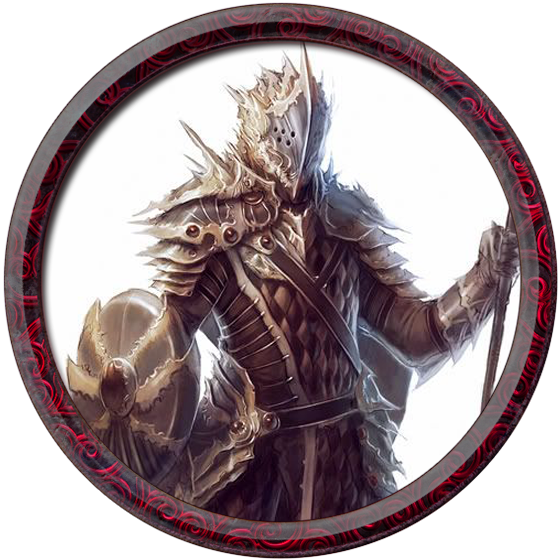 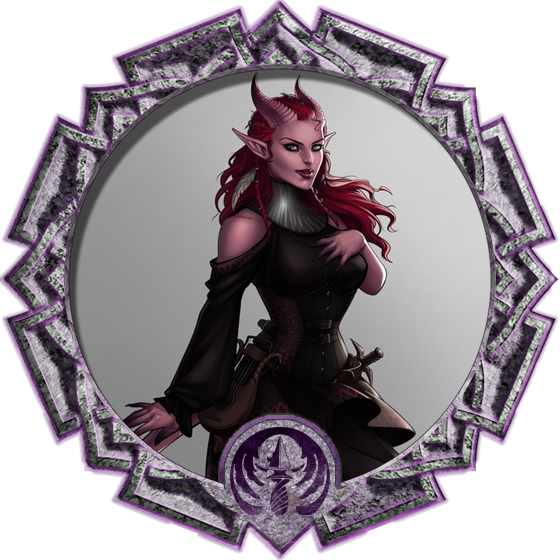 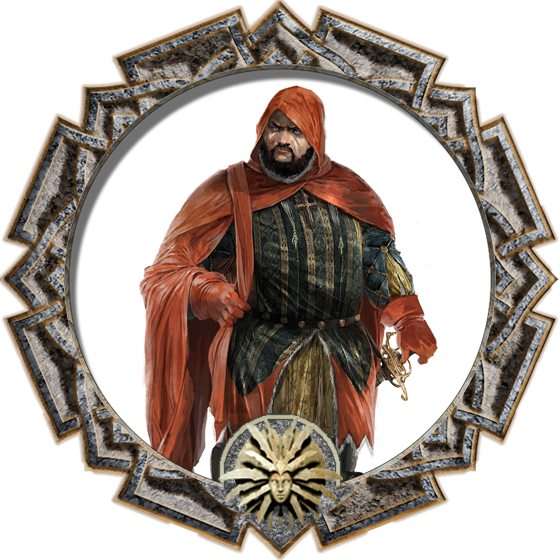 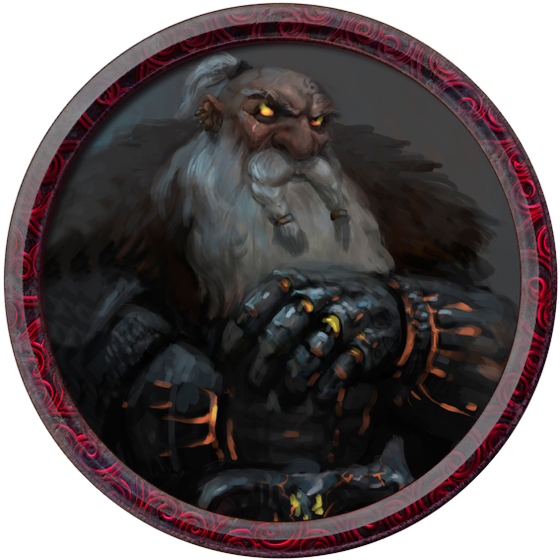