Since the fall of Parthia, the Persian Empire under the Sassanid dynasty had ruled largely unquestioned. However, a combination of crises had pushed the Empire to the brink. The Hun invasions in IY 470 onwards saw the Empire lose most of its western territories. Simultaneously, Armenia and Albania, which had been vassals of Persia, broke free. Finally, the invasions had pushed the Persians towards India, which put them into direct conflict with the Gupta Empire and strained the already tenuous relations with the Hephthalites.

The first major war with the Huns began in IY 470 when Attila led his Huns against the Persians in Mesopotamia. Persia suffered staggering defeats at the hands of the Huns and in just a few short years lost all of Mesopotamia and the neighboring border regions to the Huns. The Sarmatians, who had arrived in lower Mesopotamia a few years prior broke their treaty with Persia and became a vassal under Attila. Persia’s dominion over the gulf quickly collapsed allowing for a rise in Omani trade states. Additionally, as the Huns drove the Persians back into the heart of Iran Armenia and Albania revolted. Armenia remained independent, signing a truce with the Huns and allying with Trapezus. Albania conquered what remained of the Persian’s Caucasian territories and turned their attention towards Gilan.   While Persia was predominately occupied with the Huns, the sent an army to each of their revolting vassals to attempt to reclaim them. The army sent to Armenia was smashed at the Gates of Armenia after which point Armenia was left alone. The army sent to halt the Albanian advance met with more success. Four battles were fought to halt the Albania incursion into Gilan and Persia was victorious. Though not able pursue the fleeing Albanian army they did halt their attacks for the time being.   During the early 480s, a Hun army crossed at Hormuz and ravaged the southern Persian coast as they marched towards India. What caused them to turn back is subject to debate, but after several years, the army returned and marched northwest along the coast sacking port cities as they went. This path of destruction severely hampered Persian trade in the Indian Ocean for the next few decades. In IY 487, the Huns returned once more. Not to conquer but to traverse Persia to reach India. Attila’s armies cut a swath of destruction across all of southern Persia as they slowly looted and pillaged their way to India. Attila eventually left Persia, crossing the Indus into India and never being seen again.   The next 30 years saw the Persians at near constant war with the Hun Empire. Though combat itself was not constant, the Huns would frequently raid deep into the Empire severely weakening even the wealthiest and most powerful cities. In IY 520, the Persians supported the Sarmatians in a revolt that saw most of the Hunnic pressure taken off their borders. However, Persia was in no position to reclaim its lost lands and instead had to look inward to prevent a complete collapse.   In 550, after the death of Kavadh I, the Huns declared war once again with the goal of seizing more Persian lands. Khosrow I, was able to lead a staunch defense giving little ground. However, the Great Parthian Revolt in 555 forced the Emperor to sign a treaty handing over what remained over northwestern Persian to the Huns giving them control over the Zagros Mountains west of Hamadan.

With the Hunnic seizure of Mesopotamia, the Persian Empire faced a potential food crisis if a new bread basket was not quickly acquired. Unable to reclaim the region, Persia set about with two goals to solve the problem: first, improve the agricultural infrastructure in the eastern half of the Empire to produce more food in what admittedly was a desert, and second seize as much of the Indus valley as possible.   What troops Persia could spare were sent to the eastern borders. Thus began a near century long conflict to occupy the Indus River valley. Inconsistent warfare, limited supply lines, and simple lack of manpower for the front led to a slow grind against the powers in India. It took fifty years for the Empire to reach the Indus and hold it for more than a few months. In IY 533, Persia was finally able to establish a forward command post along the Indus to oversee its continued conquest.

Part of the agreement for Persian support in the IY 520 Sarmatian revolt was that Sarmatia would become a vassal of Persia. This agreement lasted roughly five years before the Sarmatians broke the treaty and instead set about establishing their own dominion in southern Mesopotamia and Arabia. Angered by this, Kavadh I ordered a massive campaign –despite his army’s weakened state- to subjugate the Sarmatians by force and perhaps reclaim Mesopotamia while they were at it.   Several early setbacks slowed the Persian’s opening attacks and resulted in the Sarmatians having time to better establish a defense. Additionally, Sarmatian generals recruited many Hunnic mercenary groups, greatly inflating their numbers and forcing the Persians back into the heartland. In IY 543, with fresh armies, Kavadh attacked again. Now without their mercenaries, the Sarmatians found themselves overwhelmed and their Arabic troops unreliable. However, what could’ve and should’ve been a victory turned into a nightmare for the Persians. Kavadh, quickly grew ambitious with the success of his attack and ordered the campaign to pursue the Sarmatians into Arabia and crush them entirely. Meanwhile, the Sarmatians had been wisely courting the Gothic and Vandali Kingdoms. Fearing that Persia would come for them next, the Kingdoms allied with the Sarmatians and swept into Mesopotamia crushing the Persian army and liberating the Sarmatian lands.   In IY 549, Kavadh was slain in battle and his son Khosrow ascended to the throne. Seeing a moment of disorganization, the Sarmatians retook Mesopotamia resetting all the progress in the war for the Persians. In 552, Khosrow signed a treaty with the Sarmatian King to end the war. While he planned to return one day and retake the lands, he first had to deal with a renewed Hun threat.

It was perhaps one of the greatest plot-twists the Persians could have ever conceived. In IY 555, nearly 400 years after extinguishing the great houses of Parthia and ascending to power in the region, the surviving Parthian houses –who had been bidding their time-, rose up in northern Persia, leading the largest revolt the Persian Empire had, or would ever see. From all along the coast of the Caspian Sea, Parthian knights, nobles, and champions spearheaded armies of disillusioned citizens, Parthian loyalists, and mercenaries from the north marched against the Persian Empire and its relatively new King Khosrow I.   Bogged down by the wars in Mesopotamia, the Indus region, and with the Hephthalites, Khosrow was in little position to fight a massive rebellion. Having already lost one capital in the last century, Khosrow and his advisors quickly moved the court to Herat. This proved to be wise, as in less than three years the Neo-Parthians had successfully conquered most of what remained of the western half of the Persian Empire and began to put pressure on the Huns and Sarmatians.   Khosrow was acutely aware he could not win a war against Parthia in the Empire’s current state. Signing a truce with the Parthians, he was able to refocus his efforts towards rebuilding his Empire and dealing with the remaining conflicts at hand: the Hephthalites and the Indus Valley. The truce held for forty years while the Persians and Parthians consolidated their powers. However, the Persians were under near constant attack during those years and when Khosrow broke the truce in IY 596 with a war in the hopes of regaining most of western Persia, he found the Parthians more than ready to face him. The war lasted seven exhausting years. In the end, the borders did not shift, but Persia was utterly defeated and Parthia left crippled. The treaty saw the Persian Empire split into three smaller Empires and Khosrow left for self-exile.   However, Khosrow’s son, Hormizd, after seizing power in one of the three splinter empires, raised new armies and once again went to war with Parthia. While about as successful as his father had been, his armies conversely were not annihilated in battle, and the war ended in draw with the treaty returning some of the Persian lands and the promise to end fighting with the Parthians.

Beginning in IY 560 the Avar Khaganate began raids into the northern regions of the Persian Empire on the eastern side of the Caspian Sea. While by no means an Empire crippling invasion initially, it did force Khosrow to send forces to the region to defend it instead of conserving his manpower for the Parthians. For the first ten years the invasions were no more than nuisance raids that were easily defeated. However, the arrival of the Gokturks in the region in in IY 572 saw the Avar Khaganate split in two. The northwestern half of the Khaganate fled towards Europe, while the southeastern half was now caught between the Gokturks and Persians.   In a desperate attempt to flee from the Gokturks, the Avars led a suicidal invasion of Persia desperate to gain new lands. A short alliance with the Gokturks, led to the Persians and Turks crushing the Avars entirely. By IY 580, the Avars in the region had ceased to be entirely. Either slaughted on Persian spears or enslaved by the Gokturks.

Crushed at the hands of the Parthians, the Persian Empire was split into three small subdivisions. The southern Kingdom of Pars, the eastern Kingdom of Kushan Persia, and the northern Kingdom of Oxus. Each carefully crafted by the Parthians to ensure that they would not easily nor quickly reunite against them. While all three Kingdoms were declared part of the Persian Union which tied them all together they were all pitted against each other as being the rightful successor to the Empire. For the Parthians this meant that all three would infight for the foreseeable future and should one arise victorious, they’d be so weakened that Parthia could easily attack and resplinter the Empire. However, since they were all part of a union, it meant that Parthia still had a reliable buffer against the Gokturks and the forces of India. 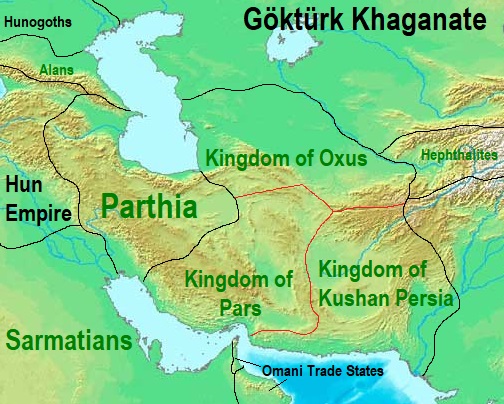