Voyage to the Flaming Garden

Funeral rites in the Nimýric Empire are tied to the belief that the souls of the dead travel to the divine garden at the heart of the Kaleidoscope.

When a spirit leaves the body, they may first spend some time lingering in the world of the living. Their voyage to the afterlife may be delayed by unfinished business such the desire to find justice for one's death, to make amends for a failure or to continue watching over one's loved ones. Such lingering spirits make their presence known through seemingly coincidental happenings. They are often behind accidents befalling those who wronged them, or bring good luck to those they care about.

Once the unfinished business is resolved, the voyage to the true afterlife begins. Like the smoke of a fire or a the steam from a kettle rise to the sky, the spirits leave behind whatever weighed them down and float up to the stars.   The traveling itself may take decades. Though the fires of Saphéne's garden are impossible to miss, it is far away and the air is cold and empty, making the voyage strenuous even for the strongest spirits. However, those of particular bravery may be guided along their way by Éisabó the Firebearer, while those who showed exceptional wisdom can hope for the support of Lahasabó the Waterbearer.

At the end of their journey, the spirits arrive in the beautiful realm that is Saphéne's garden. Upon entry they are assigned their roles, based on their deeds in life. Those with a noble and selfless past are granted an afterlife of comfort, free to enjoy the pleasures of the garden such as the fruit from the divine trees, the inspiring beauty of the flora and fauna, and the merriment of the festivities taking place among them. In contrast, those whose life was marked by greed or cruelty are made into their servants as a way to pay back what they owe society.   How long they need to serve depends on the severity of their misdeeds. They are given a chance to gain their freedom once every winter, when Saphéne visits her garden. During that time the Mother Goddess judges the serving spirits and frees those who have proven themselves worthy. All free spirits are then invited to join her in celebration until she leaves again.

As you gave to us, we now give to you. Take these supplies and your virtues with you, leave your worries and your shame with us.
— traditional Nimýric funeral prayer

The body of the deceased is washed, embalmed with scented oils and dressed in traveling clothes, with sturdy shoes, a warm cloak and a sun hat. Friends and relatives erect the funeral pyre, which includes a stash of various food supplies that will nourish the traveling spirit on the way to the garden.   Before the cremation, the loved ones of the deceased say their goodbyes, assuring their spirit that they are free to go and any unfinished business will be taken care of. A priest of Saphéne will then speak the ceremonial prayers while their acolytes light the fire.

Oh Saphéne, Mother of All, I humbly wish to tell you of the good these souls have done. May it shine a light on their past and help you in your judgment.
— traditional Nimýric remembrance prayer

The family of the deceased will place their name and life dates on the family shrine in one form or other, for example carved into a piece of wood or ornately calligraphed onto a scroll of paper. Every year when Saphéne visits the Flaming Garden, those left behind burn a mixture of dried flower petals and incense while speaking prayers for the spirit. In their prayers they point out virtues and good deeds of the deceased, to help them earn their place among the carefree guests of the mother goddess. 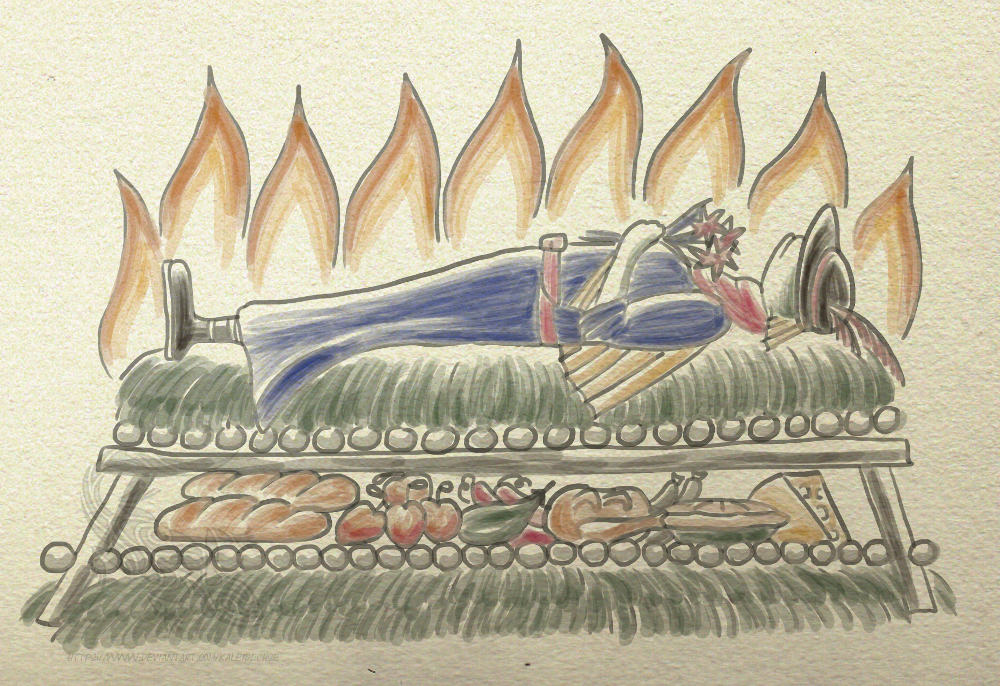 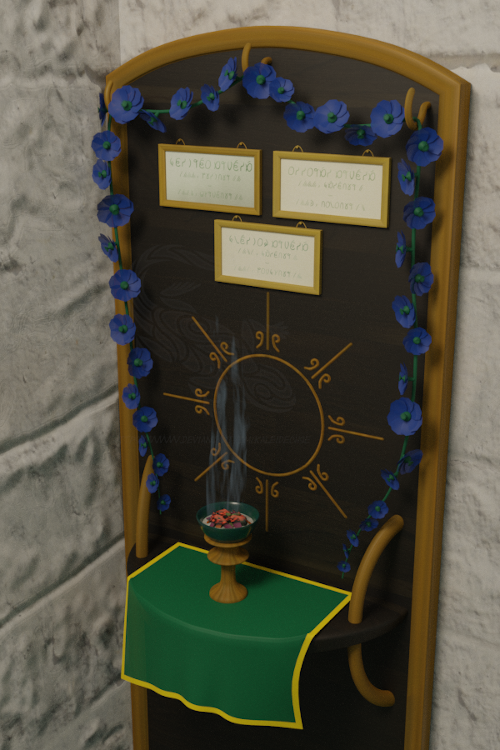