The palace at the heart of the capital houses the Imperial Couple and their children, along with their advisors and high-ranking service staff.   Its impressive throne hall is where the fate of the Nimýric Empire is decided, where important guests are received, and where the Imperial Family celebrates holidays, weddings or other joyous events.

The main building is a wide block with three smaller ones on top. Four towers sit at its corners and a fifth one rises up from the middle. The roofs of the towers are dome-shaped and covered in brass scales.   Colonnades run along the outer walls of the ground floor and the two above. The columns supporting the ceilings are made of Rophnýnic Marble with gold accents, as are the decorative sills lining them. Ornamental fences surround the balconies. The walls themselves are painted white like those of most Nimýric buildings.

The walls of the main rooms and hallways are completely covered in the prestigious blue-green marble. They feature columns like those seen outside, making the interiors appear wide and open despite the dark coloration. Light is provided by round lamps made of milky glass and brass frames that are fashioned into the shape of suns.

The palace itself is surrounded by lush gardens, structured by well-groomed hedges and canals which double as light barriers.   Additionally, there are three rings of walls which are lined with smaller service buildings and overseen by stocky towers. The moats running along their outer sides are inhabited by nyónaviné, predatory fish which guard their territories ferociously.

Construction of the Imperial Palace began on Chychlun 1 in the year 908 PN. It was finished nearly 12 years later, on Roklun 16 of the year 919 PN. The Imperial Family officially moved to the new residence during the following month and held the next New Year celebration there as an opulent feast. 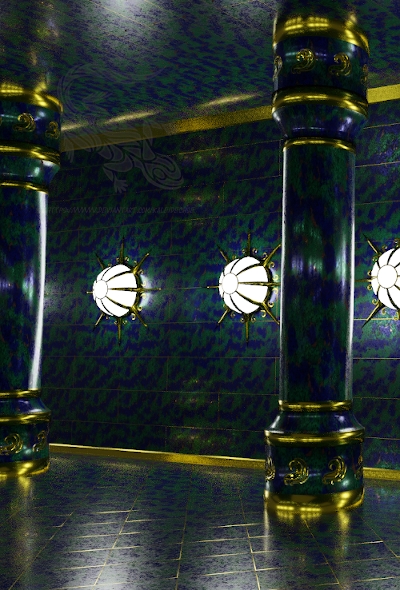 Answering: "A building associated with governance, leadership or change"
Visit Kaleidechse's Competition Page Check all other answers to this prompt Competition Homepage

Huh. I actually went and spent half a day cooking up the exterior view in Blender. Thank goodness I already had most of the assets...