At the dawn of time, the goddess Saphéne left her home among the distant stars to travel the universe. She eventually stopped to rest, but soon got bored of sitting idly and began fiddling with her golden hair. One hair eventually came loose, and Saphéne started twisting it into what would become the saphéniró flower.   Warmed by the breath of the goddess, the flower blossomed and ripened, spreading its seeds across the ground. Soon an entire meadow formed. Delighted by her creation, Saphéne breathed more warmth into the tallest of the flowers, growing them into giant sesa palms.   The goddess picked some nuts from those palms and heated their shells until they crumbled into what are now sturdy rocks and glittering sand. After eating the nuts, she opened her water flask to drink, but it slipped from her grasp and some of its contents spilled. Saphéne picked up the flask, drank and turned her attention to the stream of water flowing through the sand. She liked the sight of it, so she added some more water to turn it into the Vóganyó River.   As the water turned the sand muddy, the goddess picked up some of the mud, kneading and shaping it into what became the various animals of the nascent world. Baked and animated by her warm breath, the animals began frolicking in the meadow and forest. But while they entertained her greatly, the goddess felt that something was lacking.   She decided to perfect the design, to create beings with a truly intelligent mind. So Saphéne bit her finger and let some of her own blood drop into the mud. From this new mixture she formed the Ichtýdé, creatures after her own image. She watched with great satisfaction as her children explored their surroundings, eager to learn. Finally, the world was complete.

By that point her creation had become too vast to carry it with her. So instead of continuing her travels, Saphéne decided to settle down nearby. She picked some of the most colorful flowers and set out to find a place for planting a garden that would become her new home. But when she returned, she was dismayed to see that the world had grown cold and dark in her absence, and the life on it had begun to wither away. She melted the ice that had formed and revitalized the plants, animals and people, but knew that she would need help to continue watching over them. Besides, she was beginning to miss her family back home.   Saphéne therefore set her new garden ablaze, creating an enormous fire that would be seen far across the vast sky. By shaping the colorful flames, she sent a message to her sister Palia who gladly accepted the invitation. Once Palia saw the young world, she quickly took a liking to it and agreed to assist in caring for the creatures. While she has neither the skill nor the discipline of her sister, she has been doing her best ever since, and the world flourished under their watchful eyes.

Variations of the myth have been told for as long as the belief in the Mother Goddess existed. It was first written down in the original Goróbaó, at the behest of Nimýron the Benevolent.   Every Nimýric child is taught about the origin of Chryphóra at an early age, and the myth is frequently referenced in the sermons of the bycópané.

Little has changed about the myth since it was written down. Nevertheless, later retellings are often more elaborate, going into details about the different plant and animal species.   The myth is more likely to be different in kingdoms which are further away from the heart of the Nimýric Empire. Sometimes aspects of the old heathen faiths found their way into the creation myth, especially in rural areas.

Most copies of the Goróbaó contain beautiful illustrations of the creation myth, and larger temples are often decorated with tapestries of the same imagery. Simpler depictions can also be found in the homes of religious artisans, such as a figure sculptor striving to do Saphéne's creations justice. 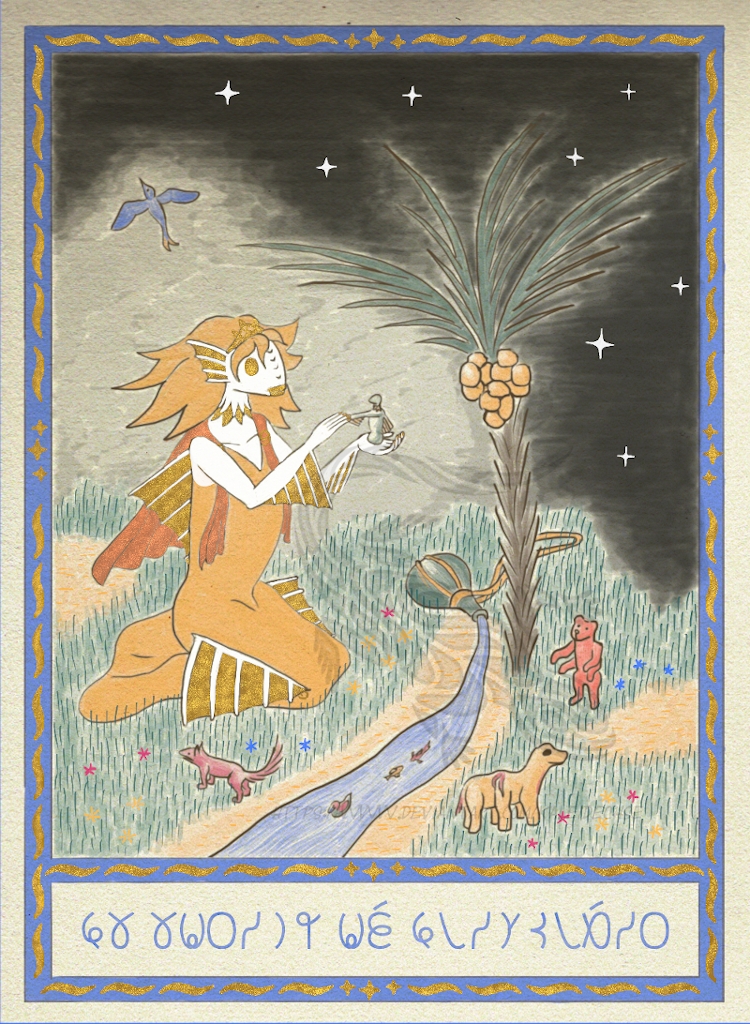 That is a beautiful, very classic origin story - reminds me of the ones we might hear from ancient civilizations in our world. :)   It is a beautiful piece of writing and one I greatly enjoyed reading

Thank you very much, I'm happy that you like it! :D

What a beautiful creation myth, and I love the art that you've done to go alongside it. Really lovely story. I like that some people tell the myth in more elaborate detail. That sounds like fun. :)

Thank you so much! ^^ I really enjoyed working on the art, it's definitely one of my favorite illustrations during WorldEmber!

This is a fascinating creation myth, I really enjoyed reading it! The imagery is awesome, and so is the art, great work!!

Thank you so much! I'm very happy that you like the imagery! ^^

Thank you very much, I'm happy that you like my work! ^^