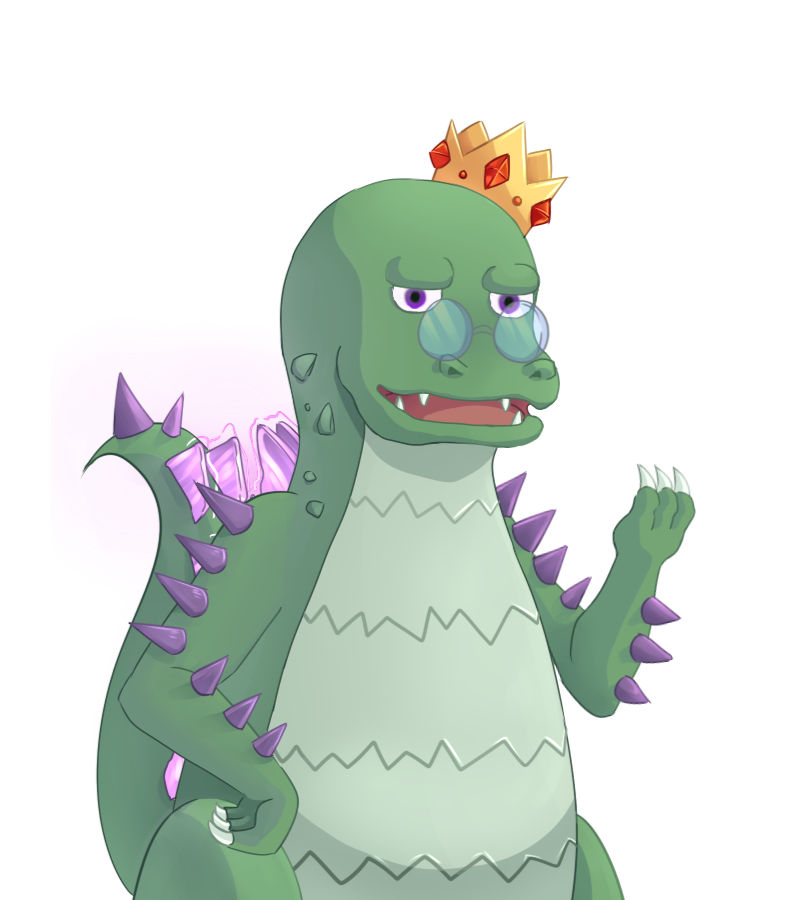 
The name Kōjin comes from the Japanese kami (a spirit or god) of fire, the stove, and the kitchen!

Kojin represents violent forces that are turned toward the betterment of humankind!

I know I'd rather eat a nice burger and play my NES than go out and trample half a city block trying to pick up a pre-order game...

Kaiju Kojin and his family, among many others, were regrettably sent away from the comforts of Monster Island and forced to adapt to a new world amongst the humans.

Most Kaiju would just rampage till the Kaiju Defense Force gets involved, then no one is happy.

So, Kojin decided to take a note from his namesake, and turn to his hobbies as a source of inspiration on how he can interact with his new world.

Kaiju Kojin is slightly out of shape due to his gaming lifestyle. He's trying to get back into peak building stoping shape, but it's really cutting into his gaming schedule...

Kaiju Kojin stands 58m tall (190ft). Like all Kaiju, his size and mass are variable, thought maintaining smaller forms is difficult over time. he often describes it as "holding in a sneeze." 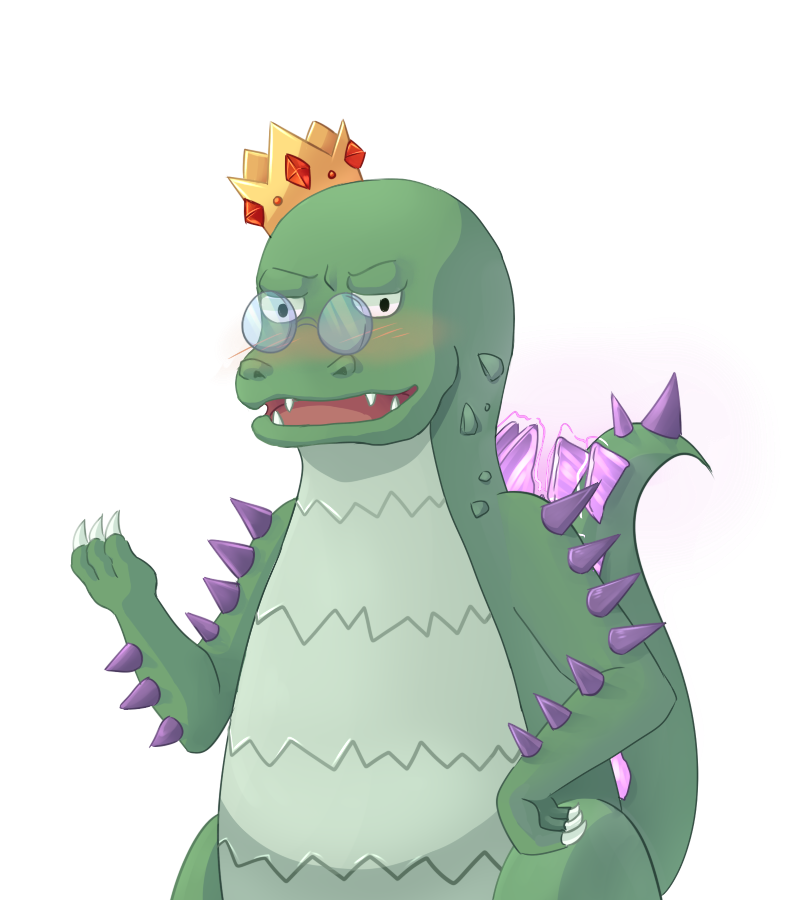 The whole size change thing is a common secret.

The Kaiju community really tried to shush up Minnila's performance in his movies, and say only he could do it... but we all can.

It's like holding in a sneeze. You know you have to, but if you breathe right, you can do what you need to do... but eventually you have to let that sneeze go.   It comes in handy, and I can go a good six hours in a human-sized form before I need to get up and stretch.

Kaiju kojin's face looks like a crocodile. His snout protrudes and is attached to a hairless round head.

Even in human form, Kaiju Kojin is a giant green Kaiju with glasses and a golden crown on his head. Anyone would question their sanity when they see him for the first time.

Kojin's fins glow a purple colour when he's angry or charging up his breath weapon.

Kaiju Kojin wears round-framed glasses on his snout. He has 2 pairs, his "human" size and his "kaiju" size. It's the same for his crown, and he's often readjusting it on his head, as it often falls off.

Dented, dinged up, and dirty, he takes pride in wearing it and doesn't see the damage as flaws, but each nick and scrape as rights of passage through his journey in life.

Kaiju Kojin worked as a developer on Monster Island. Often times he would help the staff monitor the other Kaiju and ensure they got along with each other. Unknown to most of the world, Monster Island contained far more Kaiju than was reported, oftentimes these lesser Kaiju would have nothing written about them since they don't go about destroying half a city every time they stretch their legs...   Since the Xillian attack, and defunding of Monster Island... many Kaiju housed there have been displaced and has begun wreaking havoc upon the world again. The best thing for a lone, weak kaiju to do is to pick up his pre-orders and do what he's talked about all his life, take his hobbies and make a living from it.   With the little funds he had, he ordered various equipment and is starting a channel to share his collections, hobbies, and crafting skills! He knows he may not be the best at things, but if he doesn't try, then what's the point of anything if you don't challenge yourself?

Kaiju Kojin was a well-learned Kaiju and had top marks in many Kaiju Classes... including screeching, breath attacks, and stomping! He was one of the first Kaiju to learn how to do a real-life combination attack based on one of his videogames during the stomping lesson and was promptly reprimanded about the order of things.

Kaiju Kojin was employed by the Monster Island Research Team. He is a docile Kaiju and often would mediate between the more rowdy inhabitants, as well as help with tech support.    He is fascinated with the latest gadgets the humans invent and loves to learn how they spend their free time, which is why he arrived at Monster Island. He doesn't understand how the other Kaiju can sleep all day and fight each other. If he wants that sort of frustration and practice in futility than he'll play CoD. At least then he can enjoy his killstreaks with a clean conscience.   Once the Xillian attacked earth, and Monster Island lost its funding, Kaiju Kojin had to take his wife and child away to survive amongst the humans. Other Kaiju rampaged in frustration, causing millions in damages. Others just burrowed deep into the earth and decided to sleep till the humans were gone. Some estimated it should take a hundred or two more years till they blow themselves up.    Kojin had his wife and child to look after, and so he assessed his situation and decided to follow his dream.    Something he told his son many times, is that you can do anything with enough effort. And so, with enough effort, Kaiju Kojin is slowly building up a youtube channel and Patreon page that will cover various hobbies and crafts that fancy his interests. He is excited to involve his family, and he hopes to show his son that effort and a little more hard work can match natural talent any day.   So, his channel will consist of crafts, miniature paints, playthroughs, book reviews, role-playing games, board game reviews, tutorials, breakdowns, discussions, and probably historical reenactments using Kaiju.   The choices are limitless!

(*note*: These matches were against other kaiju, as the human employees didn't want to participate... along with most of the island)

Kojin is easily flustered and embarrassed. He's not used to interacting with humans. He admires their ingenuity and the cool trinkets they build, but some of their behaviours always confused him.

Kojin is quite the Renaissance Kaiju. He can program websites, 3d design figures, Paint, Write, play the ukulele, amongst other things. He finds learning new things quite fun and loves to hoard information. He often jokes that his collection and need to archive everything is because he's part dragon, though, it's a far stretch from iguana to Dragon.   Due to his massive collection and the sheer disarray of it, Kaiju Kojin will use this opportunity to do what he's always telling himself when he saves something while mumbling... "I know I can use this for something..."

Kaiju Kojin is not like your typical Kaiju. Though moving through the city full-sized is not ideal, he tries to be as gentle as possible.

Kaiju Kojin wishes to enjoy his human hobbies and share them with other humans.

Kaiju Kojin is a writer, painter, programmer, actor, and musician. He has never trained professionally in any of those fields, most of his knowledge is self-taught.    He was hired by Monster Island to work as a consultant and intermediary between various Kaiju. They promised to keep him entertained with various human gadgets and collectables in exchange for his services.

Kaiju Kojin is quite open with his tastes. Anything creative and honestly made, he finds hard to see any fault with. Should a child's first attempt at a game be perfect? No. Life is full of pitfalls and restarts, and Kaiju Kojin embraces the earnestness of the creative process.    Kaiju Kojin despises poor quality of work. He understands the various level of skill involved, but when playing games that are blatantly broken, lazily written, or not even completed, he finds insulting. He doesn't quite understand why deadlines would not be extended to produce a quality product. Lazy plagiarism is the worst kind of sin to him.

Kaiju Kojin is honest and earnest with everything he tries. Like all kaiju, he can be prone to bursts of rage and destruction, but he tries to keep it localized. He had worked out a deal with the local county where renovations need to be done, so he can rampage there and actually help.    He does clean up his mess when he is done as well, so they appreciate it.

Kaiju Kojin's lineage must have some traces of dragon since he loves his hoard of collectables. He never had the time to manage his collection, but now had decided to share it with everyone, and curate it properly, as all good collectors should do.   Some times, he'll get obsessed with missing pieces of his set, but he's trying to learn how to move past it and turn it into something good. He really tries not to let his dragon side show through when he sees something he wants to add to his collection.
Alignment
Chaotic Good
Current Location
The Kaiju Cave
Species
Kaiju
Age
44
Date of Birth
Febuary 25th, 1979
Circumstances of Birth
Kaiju Kojin was born like all Kaiju... a matter of fate and chance intertwined with mystery and intrigue... or it could be that a pet iguana escaped from a gamer's home and ate a radioactive burrito.
Birthplace
California Coast
Children
Presented Sex
Male
Sexuality
Kaiju Waifu says he's off-limits and will cocoon the crap out of any plucky sentient rose bushes.
Gender Identity
Kaiju
Eyes
Purple
Hair
He has no hair, but wears a crown on his head that he won from the all Kaiju Monster Gaming tournament, and managed to keep his throne twelve years running before banishment.
Skin Tone/Pigmentation
Green with a light green underbelly.
Height
5'9" (shrunk) - 59m (full size)
Weight
320lbs shrunk, 32,000 lbs full size.
Quotes & Catchphrases
Keep Calm, and Kaiju On.
Known Languages
Native English, 3 or 4 french words, a smidgen of Spanish, and starting to learn cuniform
Kaiju