In machine society, the concept of luck has a special status. It is universally believed that it has a great influence on their life (and death), and many machines have special habits and/or quirks that relate to conjuring good luck. For example, a tank may load a certain ratio of different shells into their ammunition because they believe the particular numbers are lucky. A different tank may refuse to keep trophies from other tanks they killed, to avoid "catching" their bad luck. Or, a plane may paint a "shark-face" on themself to invoke the luck of their ancient idols.   Good luck rituals are very personal to each machine, and there are no commonly agreed on practices that always work - though there are some habits that are more common than others. Keeping little lucky charms that depict deities or famously lucky machines is a popular practice, for example. Wishing others bad luck is believed to bring bad luck to the offender, while wishing others good luck is believed to increase one's own.   Examples of habits surrounding good luck wishes are found in daily machine life:

It is believed that eventually, each machine's luck will run out. This is the day that they die. To postpone this day for as long as possible, they rely on their rituals and beliefs, but also their own skill and experiences.

Oh, but you must expose yourself again and again... and you must be lucky to avoid the arty every time. But the arty... the arty only needs enough luck to hit you once."
— Altær, infamous SPG

Being skilled and experienced in combat and survival holds great significance in machine society. While it's believed that if you're cursed by bad luck, you simply cannot compensate with your skills, everyone agrees that gross incompetence will ruin any good luck one has been granted by their fate.

All the luck in the world cannot save a fool.
— Common saying 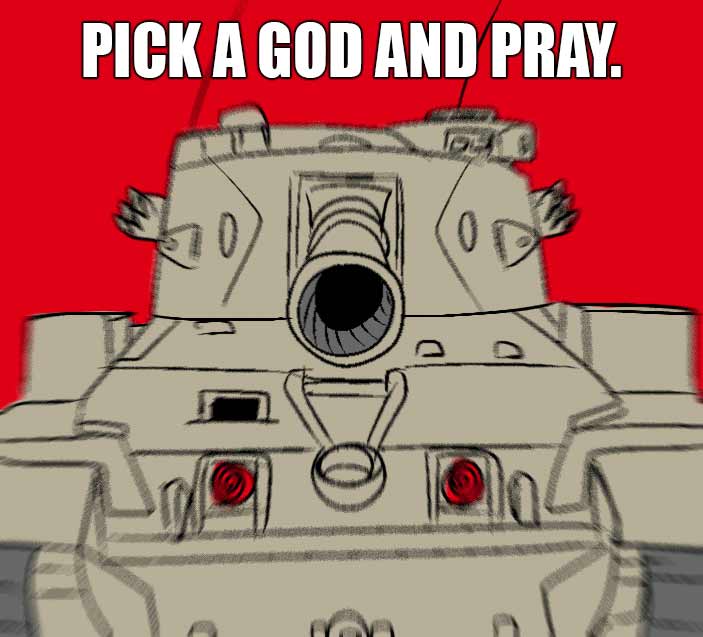 "The definition of bad luck? Well, for me, I'd say that'd be seeing the rifling of a hostile tank's barrel. If you can see it, you know you're too close to make it out in one piece."

This is a really interesting article! I can understand why the tanks would have good luck rituals with the tough world they live in.

Tanks in general are very superstitious. I think they would get extremely anxious if they didn't have something like rituals and habits to cling to.

Nice article! I like machines believing in the concept of luck, and the specific example you give of good luck rituals are fun :D

Feel free to check my my plant challenge article and the associated short story :D

Thank you! Their whole spirituality is centered around this concept, it helps them be less afraid.

I absolutely love all the examples of superstitious warding of bad luck practices you've got in here--it's SO fun to imagine how that would work out with a society of machines. The image is really amazing too, a nice point of view/perspective method, with the very close very dangerous thing perfectly clear and the rest blurred aside. :D

Is this the tank equivalent of karma (where it can apply at a broader scale)? Or is it only very specifically for Luck purposes?
Together we soar!
To Do List Adventures: RPG + interactive fiction for your goals

I'm glad you like it, thank you!   I'd say the concept of Karma as we know it is not a thing in the HV. It's very common and not unusual that someone wishes another harm. No one really bats an eye at that. Fighting honorably and skillfully is more important than being a "nice" tank, when it comes to what they expect from the afterlife and such.