Didi Hak'Dret of the Steel Eaters

Didi Hak'Dret is a deaf expert bladesmith from The Steel Eaters clan. They are the only known orc to be able to craft Kliz steel, the technique for which they recovered from ancient records after arduous research and study. This makes their work and reputation well renowned in the Hold and even beyond as Kliz can be found wielded even by non-orc people who come to acquire it usually by theft or looting after a defeat in combat.   Didi is known as a no-nonsense person even by orcish standards, they are often stern and slow to warm to people. They have strict rules of engagement and high standards of the basic respect they should be shown, which most people usually come to know by interacting with them and getting prices raised suddenly following a disrespectful action.

Didi is fit and with especially strong arms due to their work in the forge. They are deaf from birth and their sometimes selfless dedication to their craft shows in flares of chronic pain which can sometimes go for as long as days. To prevent that, Didi's inner circle often checks on them to ensure they don't lose themselves working in the forge without exterior interaction and feed themselves.

Didi has colourful strands of fabric interwoven into their hair. Itself complexly braided in order to keep it out of their face. They wear a white handkerchief which they wet to protect their hair from the sparks and heat of the forge when working.   They also have a brass ring through their left tusk.

Didi can most often be seen wearing a white handkerchief around their head and a thick leather apron which has char marks from metalworking and under which they are topless. The apron is fastened to their waist by a tool belt which they never take off and they wear light fabric trousers.

Didi was born in a drethan bloom by an orc from the Steel Eaters clan, Rin'Asna Tux'Dret, who had conceived them with a visiting wet orc of the name of Shlal. Didi was raised by the Steel Eaters as a whole, as is customary for freshly bloomed orcs in legacy clans. This was until they chose to belong to Hak'Dret (name of the house of Bladesmiths, as well as the name of the craft) and learn bladesmithing at age 6, taking on Hak'Dret as part of their name. After picking their house, they spent 2 years as a general assistant to the more experienced members of Hak'Dret. In that time, they were introduced to bladesmithing and formed ties with the other orcs there, eventually becoming Kokh'Hak Hak'Dret's apprentice.

They learned under Kokh'Hak, until her death in 4486 AR. Kokh'Hak's premature death before she could pass on the full extent of her knowledge to her apprentice meant that Didi finished their training being taught by various different masters of Hak'Dret and experimenting with the forge inherited from Kokh'Hak.

Didi became recognised as a master at 19 upon developing the technique to produce Kliz. They are self-employed as an expert bladesmith producing high quality blades and are in line to inherit the top position in Hak'Dret of coordinator between Klis'DretSword-makers and Tux'DretAxe-makers when the current coordinator dies.

Through studying old dwarven reports and experimentation, Didi managed to recover a lost bladesmithing technique which turns impure ore into ultra-hard yet tough blades which exhibit a wavy pattern. These blades most often are used for swords and knives which ended up named "Kliz" for their efficiency, sharpness and durability. Kliz is both the name of the material as well as for the blades produced with it.

Despite their best attempts, Didi hasn't managed to master water quenching techniques for their blades. They work to attempt to master it, often fixating on and practicing it over and over on days when they are not working on commissions. Water quenching is not practiced by the Steel Eaters but references to it in dwarven texts makes Didi keen on mastering the technique even with the lack of additional information available.

Didi is afraid of earthquakes and routinely check the stability of the ground under their feet before choosing where to stand when in a new place. This also shows in their routine of always standing or sitting in the same spot when going to known places.   They also put a lot of pressure on themselves to only produce the highest quality blades they can when commissioned, which leeches into their practicing of further advanced bladesmithing techniques when on a slow day.

They want to discover the secret to water quenching and master the technique which isn't practiced by anyone in the Steel Eaters clan.

When cleaning themselves, they include their legs.

Didi is in cooperation with all of the orcs of Hak'Dret including Klis'Dret and Tux'Dret as these houses both exist under Hak'Dret. They occupy a highly esteemed position in their house and are perceived as the natural successor to coordinate the house as a whole after the current Dret'Uelas dies.   They are the favoured bladesmith for visiting wet orcs to commission work from. Their partner Khola is in fact a wet orc who takes charge of parties going to the Steel Eaters when wet orcs require commissioned work from them. Khola and Didi's relationship is peaceful and smooth sailing as both respect each other's spaces and part way and rejoin wih no qualms or hang ups.   Despite their renowned skill, they have no apprentice of yet, by choice.

For a large order of Kliz by a school of wet orcs, Didi received the gift of a small pond installed in their forge and two fish, one blue and one green, on top of the week's worth of food they demanded as payment. The fish have grown as large as one of Didi's forearms each and don't seem to be stopping to grow. They come from a species of fish very important to wet orcs in maintaining their blades as the fish seemingly feed on rust. Didi feeds their fish by plunging unsalvageable botched blades into the water and letting them rust in the pond.   When not working the forge or honing their skills, Didi likes to attend and criticise orcish pro-wrestling performances put on roughly weekly by various pro-wrestlers from the clan who are training for the Yearly Orcish Pro-Wrestling Tournament.

Didi's reputation and skill keeps them as well as many other bladesmiths fed. 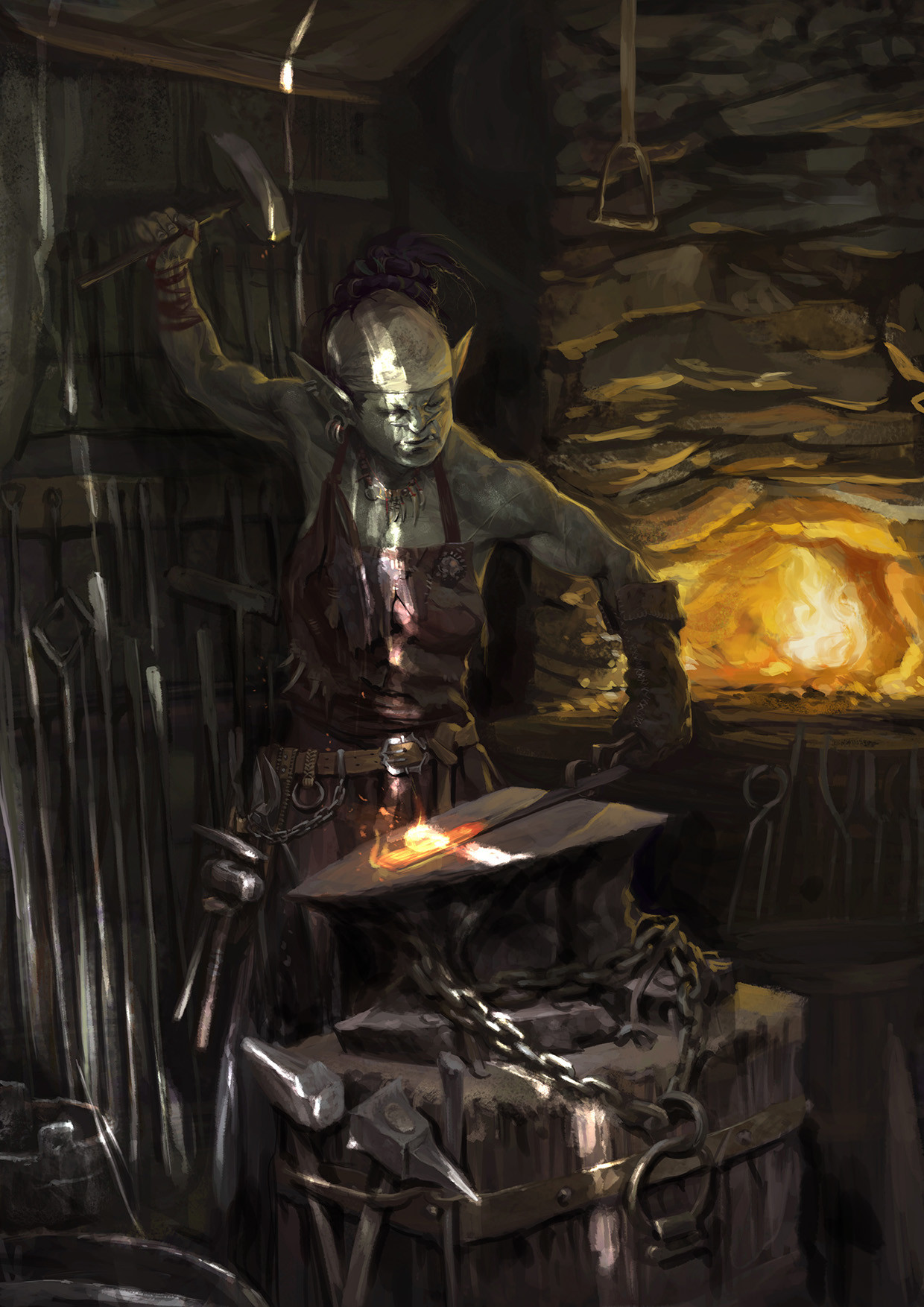 Alignment
Chaotic Neutral
Current Location
The Foundry
Species
Orcs
Ethnicity
Legacy Clans
Year of Birth
4485 20 Years old
Circumstances of Birth
Didi was conceived by an orc from a seed clan who comissioned work by The Steel Eaters and a Steel Eater. They were given birth to by the Steel Eater orc.
Birthplace
The Foundry
Current Residence
The Foundry
Sexuality
Bisexual
Gender Identity
Nonbinary
Eyes
Stern and black.
Hair
Long and interwoven with colourful strands of fabric. Often pulled and wrapped in a tight knot at the back of their head, especially when working.
Skin Tone
Cyanish with mottled navy freckle-like dots over the skin.
Height
5'10" - 1m77
Quotes & Catchphrases

Sleep puts no food on my table.