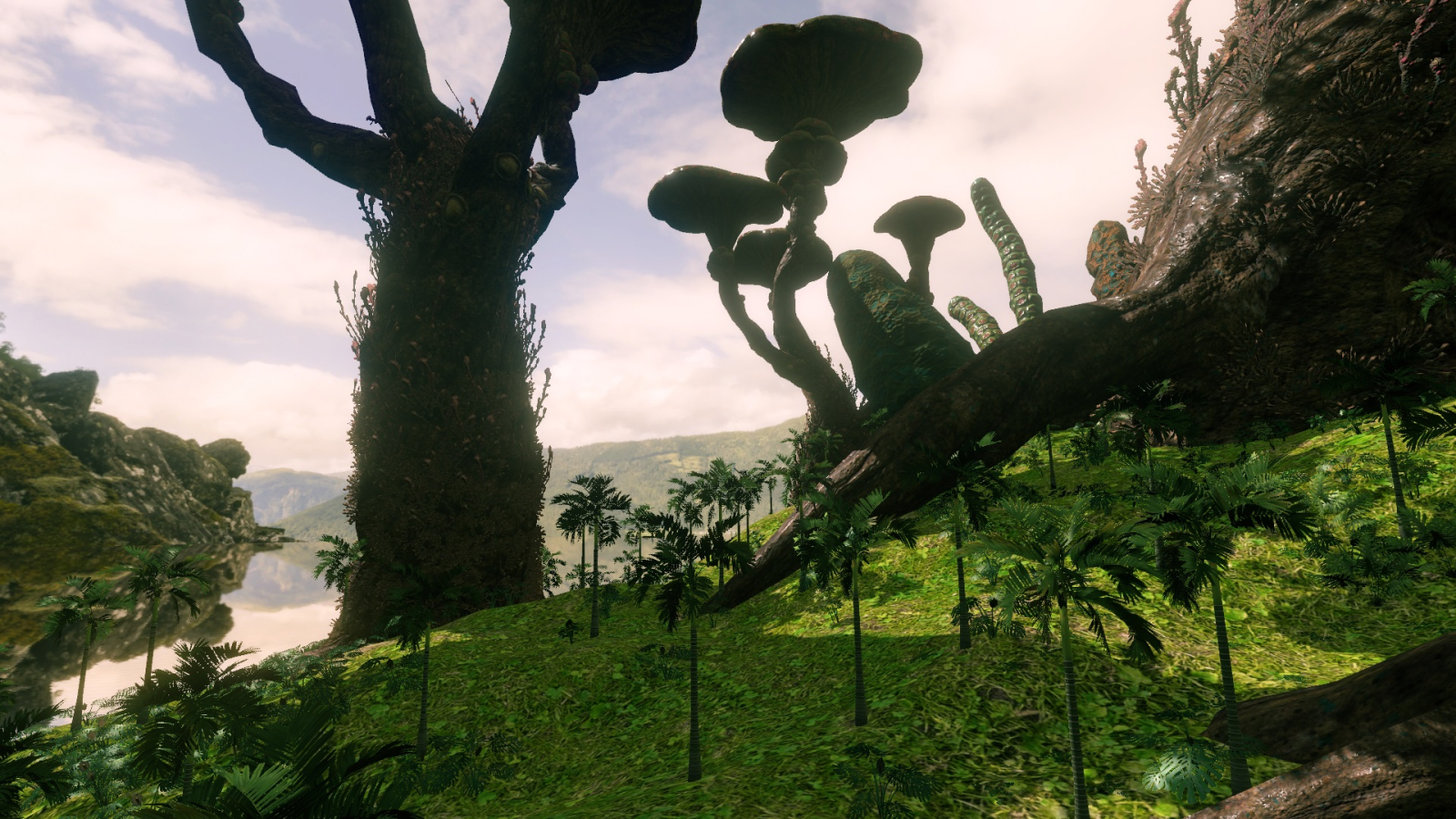 The simplest vision of order, the ability to grow in size and/or complexity is a requirement for all living things. Life is essentially, taking the chaos and using energy to structure it. The Orphelian on this planet has created a nutrient dense precipitation system which leaves “God’s dew” (Mupah locally) across the land. It is said that this dew is so rich in nutrients that a single drop is enough to power 1,000 humans for 3 days.   The beings that keep this Orphelian are the Belogors. While alien to the human reader, they are essentially a fungal system whose sinewy tendrils track into almost all spaces on their planet. This mycelium-esque structure gives shape to “fruiting bodies” which are centralized nodes of intelligence and capable of movement via redirection of growth. Through this excessive growth system the Belogors have created immense structures of habitation.   Belogors are able to leave their mycelial tracks (called Gomodor or faal colloquially) by attaching packet of mupah and “growing” into a walking structure which they then disintegrate behind them.

However, all is not glimmering green on Belogog (planet’s name), many species fight for dominance of the nutrient rich lands and waters. The most dangerous are The Keepers: a species of extremely rapid growth mold-like organisms. They have extreme biological efficiency, able to colonize a substrate in seconds, double there size ever minute if attached to enough nutrients and eat through almost any biological material. They are moderately corrosive to metals and are extremely difficult to remove. While heat and dehydration are effective at destruction, they spread easily through air and liquid via microscopic hooks. Once in contact with a solid surface these hooks are very difficult to remove entirely and are likely to be carried by the host.

The Belogor are the only known sentient beings to be part of the fungi kingdom. They exist as the fruiting body portion of a much larger mycellial network. In this connected mycellial state the Belogor are thought to be interconnected through a hollistic consciousness which acts almost as a single mind inhabiting their world. The Belogor are also capable of seperating from this connection for travel purposes by utilizing mupah (God's dew) to grow forward. Their unused body portions quickly degrade behind them, leaving a light crumble but aside from this they are able to "move with seeming normality" as described by the earliest contacts with them. The Belogor are capable of both independent speech, writing, and building. However, they only have need for these modes of existance in their seperated state which they call onfeto which losely translates into "the lost minds". They have described the onfeto as a birth into an intermediate, where the all loving mother is still remembered but not felt. Thus all onfeto greatly desire a quick return to their mother mind. Physically they appear in many variations of color. Hues of green, brown, blue, and white are the most common but yellow, red, orange, and even black have been reported. While the fruiting bodies are described as a "shifting mass of moist and airy dough" they are able to take on any physical shape, albeit with some limitation to fine details. However, they typically present in a roughly humanoid form to please those around them. Their mycellial form is typically a static mass, dependent on aquiring more mupah for continue growth.

Aside from their physical oddness, the Belogor are most notable for their incredibly quick grow rates. On Belogog this is a necessity, as the Orphelian of growth makes all creatures capable of such feats. Specific maximum rates of possible growth are not identified and appear to not have a limitation in terms of speed, but rather are limited by the amount of mupah present in a given area.

Given their hivemind like status it is notable that Belogor do not appear to "die" in a natural sense. While onfeto can easily be destroyed through freezing or heating, thier shared mental status means that the mother mind does little to differentiate personalities. In fact it is thought that a specific amount of individual identities were created via the mother mind and were imbude with specific knowledge when that individual needed to exist. This means that unless destroyed away from the mother mind, individuals are functionally immortal. Mycellial loss is seen as much more serious to the Belogor, as it represents a potential loss of overall resources. While it is unclear if this mother mind can be permanently damaged without complete eradication it has seen to "die back" in response to fire, freezing, drought, and in one case, exposure to space.

Belogor lack any formal social structure, their hive mind lacks a central leader or nervous structure and is merely called such for simplicities sake. Indeed, their society appears extremely alien even to the most traveled of explorers.

The Belogor hold dominance over the majority of Belogog at this time with approximately a 60% holding of all land territory. The Keepers claim most of the remaining land, with the exception of minor areas around the polar regions which are colonized by more cold resistant life. The areas where Belogorian and Keeper lands meet are hottly contested with both attempting to shift control. This war has been core to the Belogor existance since the age of Orphelians began.

Belogorian intellect is still hotly contested. Individual onfeto often appear rather slow witted, but are also prone to incredible insight. This may be due to interpretations from the mother mind, which appears to have incredible processing power and speed.

While it is not entirely clear how the Belogor interpret senses, their sight is best understood. Their fruiting cells appear to pocess a form of basic photosensitivity which creates a vague idea of object dimension, as well as basic color pallets. Thus they are somewhat blind to finner details visually. They tend to utilize touch to a great degree, and seem capable of a powerful memory. They have been known to recognize an individual decades later through a brief touch, this is made more notable by their ability to share information through the mother mind. Sound is the poorest understood of their senses, as they lack any physical ear structures. It is hypothesized that they utilize vibrations from sound waves, however this would require an even greater capacity for physical interpretation. Regardless they are able to "hear" relatively well, and accuracy issues have not been identified.

Before the great Orphelian wars, the Belogors history is poorly described. The original seed species is not even knowledge to the Belogor themselves. They were known as a large insect species, somewhat resembling praying mantises called merely Entos. Though they carried flexible appendiges, and sufficient hive mind intelligence to make complete space travel they were still unintuitive in nature and often hostile to other worlders. Thus, they kept mainly to themselves but did open to multiple trade treaties. However, when the gods went into themselves and Entropeous was born it was the Entros who first came to The Diwana's (Precursor to the Doi) aide. In this they gained great respect, and were finally welcomed as the last member of The 9. During the war itself they show extreme tactical flexibility and willingness to sacrifice for greater goals. It was sung that a dozen Entos fighter ships held off four hundred Hongru swarmers long enough for the Owunda king to escape.
Scientific Name
Belogoros Espansas
Origin/Ancestry
Entos
Lifespan
Undetermined
Average Height
1.4-2.4 meters for onfeto, although significantly larger or smaller sizes are possible
Average Weight
40- 60kg for onfeto