The party gathered it's belongings, ensured they had enough supplies for the journey and mounted up. The sun was shining as they set off early that first morning and the whispers of forthcoming adventure added a level of excitement as the caravan began it's long journey north.   People of all colours and creeds made up the caravan. Wagons, carriages, carts and many riders headed off towards Waterdeep. Some were singing, others played instruments and children ran around the slow moving vehicles as their mothers shouted and scalded. Although mostly humans, the companions also spotted a fair number of dwarfs, halflings, elves and even some sullen-looking half-orcs BUT NO TORTLES.   Each vehicle of the caravan had a small or larger entourage. Well-dressed merchants with wagons laden with trade goods were guarded by professional looking soldiers. Less well adorned folk of the mercantile class might have one or two mercenaries in mismatched armour. From some caravans children peered out excitedly, families making their way to a better life or the promise of wealth elsewhere. Priestly acolytes and scholars could be seen on some caravans and carriages, noses in books or deep in prayer. Enom Tobun seemed cheerful and talkative on that first morning, happily chatting about the procession of caravans and the surrounding countryside. The day, warm and pleasant but for the smell of the horses, passed peacefully. The caravan pulled up for the night as dusk approached and Picasso smelt cooking, wandering off to investigate and making a friend along the way. he later returned with The Giant, a mess tin full of stew and some lamb on a stick.   As the characters rose for the second day the weather had turned a little more gloomy with the promise of rain in the air. The caravan was moving into a hilly area that Tobun informed them was known as 'The Fields of the Dead'. It was named thus due to the many battles that had been fought there in the past and the tombs, cairns and shrines built into the landscape marked many a warrior's grave. The people of the caravan were silent and sullen here, an occasional child's cry and the sound of drovers goading horses were all that broke the silence.   As the companions rode alongside Tobun's wagon they heard the gallop of hooves and a large half-orc gentleman arrived next to Kruierri....
How much for your gun?....
....he said in a gruff voice as he road alongside Kruerri. Kruerri for his part tried to ignore the uninvited guest and deflect his approaches and the half-orc galloped away. However, he came thundering forward again shortly afterwards and was even more persistent. Once again Kruerri saw him off and that was the last of they heard of him that day.   The caravan eventually reached its stopping point for the night. It was immediately obvious that the weather was far less clement than the night before and a chill hung around the camp.   Due to the slightly odd events of the day and the camping location in the midst of the silent, misty and brooding hills, the whole camp was a little more wary and a little less jolly than the night before. The party placed a guard throughout the night, taking turns to watch over the others sensing danger in the darkness. Kruerri lay down with his gun alongside him but did not fall asleep as The Giant took the second guard shift. The camp had long since quietened down by this point and a mist lurked in the dark behind the outer ring of caravans. The Giant kept the fire stoked up, he did not feel the cold due to his experience of a life lived outdoors but he knew the others would benefit from it. 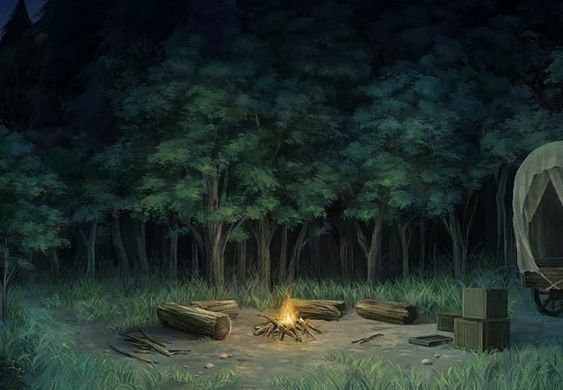 As he sat in quiet contemplation a slight noise in the darkness caught his attention. However, nothing further happened and he assumed it was just a nocturnal animal hunting in the mist. He settled down but again, a faint noise alerted him to danger. He stood and slowly moved towards a nearby caravan, the suspicious sound emanating from the darkness. Kruerri heard The Giant stir and got to his feet, bringing his gun with him and squinting into the darkness, strange shadows being thrown by the flickering campfire behind him. As The Giant moved closer to the caravan weapon in hand, he heard a whispered warning and knew he was not alone. Seconds later several dark-clothed figures burst from the darkness, one engaging him whilst the other three headed towards the startled Kruerri. Neither of the companions could react before the flash of naked steel was seen in the campfire light.   As the three assailants circled Kruerri, one of them grabbed the barrel of his gun and attempted to wrestle it from his grip but he held fast and they grappled together. Unfortunately for the assailant the gun was loaded and Kruerri fired at point blank range into the attacker who was severely wounded, he made a break for it clutching his blasted belly. The Giant, transformed into his terrifying wolf form dispatched his attacker, but not quickly enough to prevent another of the black-masked rogues from making an attempt at the gun, wisely grabbing it from the side this time. Once again Kruerri held on tight and managed to avoid the blows of the last rogue before The Giant arrived to help. The last two rogues gave up, abandoning the attempted theft and took flight. Little were they to know that the wolf Giant had the smell of blood in his nostrils and gave chase, a murderous red gleam in his feral eyes. A few minutes later Kruerri and the awakened companions, other than Picasso who slept soundly and snored loudly throughout the attack, heard screaming off in the distance and then silence. The Giant returned shortly after covered in blood and dragging an unconscious and masked form behind him.