I might lack the ability to fly, but here in the open waters you're the one with the disadvantage buddy!
— Siren Sailor

Sirens are one of the races native to Inselreich, consisting of bird-like humanoids. With their home on the Siren Islands, people see them as the first people of the archipelago.

Although growing up in an isolated environment, many opened up to the greater world. And thanks to an alluring form, they have made a name across Sichelan.

The average Siren has a humanoid appearance while sporting features of both axolotls and birds. None of them have any body hair, instead having feathers on their head, forearms and lower legs. Their feet meanwhile end in avian claws, with two up-front and one on the heel.

On each side of their head one can find large fin-like gills with filaments, akin to axolotls. To help swim meanwhile, they have a flat finned tail just above their rear.

Thanks to their gills, Sirens are able to both breath on land and underwater. While they can be sensitive and prone to getting damaged, it allows them to dive deep without needing to resurface. Records show some being capable of reaching depths up to several hundred feet.

Spellcasting? Oh no no no, I have no clue what I just said. I know how to say the lines, but don't have any capacity at actual spells.
— Siren Sailor

One of the more unique traits to Sirens is their ability of mimicry. Their vocal range allows them to replicate almost any sound they heard, both natural and man-made.

What makes it so powerful is when they learn to train it. Given enough time, a Siren can also throw their voice, making them appear anywhere. While it can be a neat party trick, it also helps a lot with misdirecting any opponents as well.

A normal pregnancy for a Siren lasts about 9 months, with the typical 1-2 children at birth. What is different though that they are capable of conceiving males, females and hermaphrodites. Males are the least common sex with females being the most common.

All sexes are capable of reproduction, both with themselves and other humanoid races. However, only a Siren mother can conceive another Siren, not the other way around.

Sirens are prominent on Inselreich, but they do appear everywhere all across Sichelan. Due to their affinity with open waters, they're common around the shores and ports of the continent.

Their birthplace is the Siren Islands, where the densest population currently lives.

The Inselreichian Empire is the major power of the islands of Inselreich. Formed as an alliance between Sirens and Myopsians, the two govern together the archipelago.

A consistent upkeep of their feathers is part of Siren culture, trying to keep them vibrant and clean. With poor health or stress, they tend to fall out or lose their colour, leading to bald spots. While some can recover from it, for others they aren't as lucky.

Sirens have an understanding of gender, but do not enforce any significant roles. For a while, they used more neutral pronouns in their language, regardless of sex. As the population is heavily female, most considered it not a necessity.

Even with their introduction to the outside world, many choose whatever pronouns they are comfortable with. Whether it be their more traditional view of gender, or stuff that's more common around the rest of the continent.

To show signs of affection, Sirens like to pluck some of their feathers off to make an armband. To show affection back, the partner will wear it around their wrist, if not return the favour with one themselves. For them, they see it as their engagement ring.

Sometimes they can also have two partners, with an armband worn on each wrist. Such relationships often include a male, female and hermaphrodite, but can occur with any mixture of the three. To strengthen the bonds, said partners are also engaged with one another.

Having more than two partners though does lead to raised eyebrows. At that point, many think the relationships run thin, becoming too unreliable to be healthy.

As far as it is understood, Sirens have been on Inselreich long before anyone else. Most scholars presume they came from the south, sailing between islands until settling there. From there, there tends to be a gap describing their history, only hinted with ruins and old idols.

Somewhere along the line, they lost their body hair for feathers. From oral tradition, most assume it to because of an Aetheryical Hot-Spot, or the "colour-drowned sky". It was severe enough that it dominated the genepool, in a few generations all natives have the trait.

From further history, groups moved between the islands, forming their own subcultures. The Sirens lived isolated from any outside source for centuries, unknown to most.

Around a good millennium ago, Sirens came into contact with Myopsians when they crash-landed near Inselreich. First encounters came out with mixed results, but over time both made peace. The outsider race was allowed to settle in the northern parts of the main islands.

What nobody expected was a sudden epidemic, with Sirens dying at a significant rate. Assumptions are a disease that were on the Myopsians that mutated within the local ecosystem, becoming more vicious as a result. In the span of a few years, numbers dwindled fast, making many flee to the Siren Islands.

The Siren population died in flocks, with only a third surviving it through isolation. Myopsians provided a treatment that would prevent further deaths, but it only further mutated their genes. As such, they gained their gills and the flat tail, leading to their present-day appearance.

While it soured their relationship for a while, most overcame it, trying to rebuild the islands. As such, they banded together under the collective banner of the Inselreichian Empire.

Some of them were both man and woman, having features of tropical birds and axolotls. For the many species that live on the crescent, they were one of the most exotic things I witnessed in my career as a trader.
— Diary of a Sailor

After the Inselreichian Empire was established, it took only a few decades before the rest of Sichelan discovered them. The first contact was with a lost trade ship, with the crew quite interested in the two races native to the isles. The tales only attracted more sailors, leading to it grabbing the attention of the Great Sangfroid Empire.

The two empires met, leading to an agreement to open the isles towards trading. With it, Sirens for the first time were also able to see the rest of the continent. Thanks to their exotic nature, it also didn't take long for their name to attract attention wherever they went. For some the attention made them the stars of local taverns, for others it lured bad folk to the isles.

Regardless, it made Sirens for a while a massive sensation, until...

Despite the supposed death of the plague that almost eradicated Sirens, it lived on regardless. Like before, it intermingled with common diseases, turning for the worst. From it, the Star Plague came, spreading to the populace of Sichelan this time around.

With Sirens being the carriers, their popularity only accelerated the spread. To hinder it, the trade routes with Inselreich stopped, nobody being allowed in or out of the isles. Any Sirens that stayed on the continent went into hiding, or got caught by the public unrest.

Everything from imprisonment to execution was the fate of Sirens. A few even got plucked like chickens, believing their feathers could cure the disease. For as grand their name became, it also died as hard, leading to an age of them getting known as curse bearers.

After the plague died out, few Sirens stayed on Sichelan, returning back to the Siren Islands. Those that did kept their profiles low for a while, with even the celebrities keeping their popularity to roadway shows. The Siren name was tarnished for the centuries to come.

Their last major historical event was with the Great Sangfroid Empire. After Caesar Sangfroid declared an attack on Inselreich, they aided with a defence against his fleet.

With a surprise attack, they were capable of sinking some early before Sangfroid could even counterattack. The actual conflict was more in their disadvantage due to lacking firepower, only saved by the sudden interference of Regimare.

After that day, the Siren race did not leave Inselreich for the centuries to come. Only in the recent decades did they open up again, trying to mend their broken relationship with Sichelan.

One of the more notorious figures of Siren history. Melpomene is a fanatic egotist that took control over the city of Busmutt, using her song and dance to charm the populace. Even though defeated, her song lures in a cult-like following long after her death.

Since Sirens exist in such an isolated region of the world map, their relationships are few and far between. Most know them from stories, with the few met in person being mere wanderers. It leads to a situation where if one even shows up, they often become the talk of the town.

Their closest relation is with Myopsians, who they share the islands of Inselreich with. As their history together dates back centuries, many see one another as brothers and sisters alike. Due to this bond, the two became the icons of the island nation in the Crescent Sea.

As for those with more seafaring history, many bond well with aquatic races. People such as Merfolk and Tritons do know of their existence, with some outpost Siren societies even living together. But due to the fact Sirens aren't a full-on aquatic race, they live near the shores and islands of underwater settlements instead. 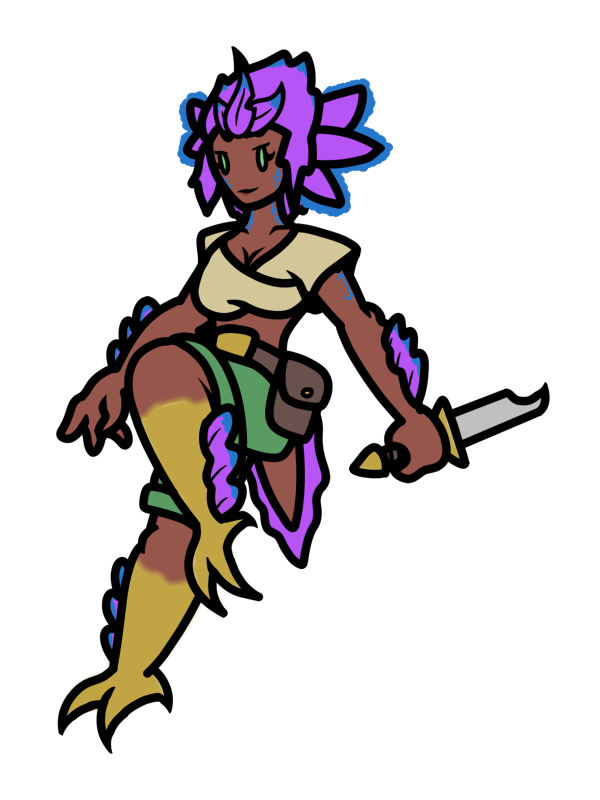 Sirens are an exotic group, known for many wild things both true and false. Those that journey do so to reconnect with outside world, meeting new allies along the way. And thanks to their gift of mimicry, many take up the mantle as performers during their travels and earn a coin or two while doing so.

Such an interesting species, love their design ^^