Dwarves have endured through the harshest of times, from losing their homes to being slaves to the gods. We don't break easily.
— Ursula Ironhand

Amongst the first races, none have lived more harshly than the Dwarves. Children of the mountains, once slaves to the Titan Fjallguth, their kind has a long and troubled past.

Spread across both above and below ground, their kind tries to find new homes. United as a great community, they face the dangers of the world together wherever they go.

Despite their close similarities with other humanoid races, Dwarves are much different. Shorter and broader at first, both their muscle mass and bone density is much higher than usual. The skull especially is built to withstand blows, being thicker overall.

Their insides have an enlarged liver and kidneys due to handling more toxic environments for so long. While not making them immune to toxins, it gives them quite the resistance. Some say it is so strong that a few individuals can't even get drunk because of it.

Most Dwarves also have a copious amount of body and facial hair regardless of the sex. This might be due to a higher production of testosterone in their system.

Dwarven blood is quite potent, making it hard to dillute on a genetic level. Even if a Dwarf reproduces with other races over multiple generations, the offspring is near identical to a pureblooded Dwarf. The only difference might be their height.

The biggest issue can be for female Dwarves to reproduce outside their kind. Their strong immune systems can reject an egg fertilised by another race, refusing to let it settle. Although eventually it can end up working out through multiple attempts.

The average pregnancy lasts around eight months with one to two children.

You are going to lose a liver and half a brain if you try to drink this.
— Lane Palmer

Dwarves are omnivorous like other humanoids, but their stomach can handle much tougher stuff. What other races might deem inedible they digest with relative ease or no ill side-effects. Because of it, some of their delicacies can be dangerous for non-Dwarves.

It is most noticeable when they try to get intoxicated in some manner. Most of their alcohols are so strong solely to overpower their body, making them not safe for other races.

Dwarves are found everywhere but they find their home in Nõrdlann. Most tend to stay in large communities of their own kind, but smaller clans and extended families do exist elsewhere.

Some delve deeper, leading to settlements in the upper Subterrane. To no surprise, there have been also reports of a few Dwarves on the Plane of Earth.

Dwarves possess a semblance of darkvision due to their long history living underground. This allows most to see in total darkness, albeit without any colouration.

Things built by Dwarves follow a principle of being efficient and durable. Anything built by them will last a lifetime even through constant usage. They are so good at it that some clans still use tools made when they were founded in the first place.

This does lead to a stagnated evolution of their technology. Most of their creations are not as advanced as a result, making them more reliant on raw power than anything else.

What Dwarves do excel at is metalworking and the usage of runes. Centuries of refined forging techniques allow them to make things that can harness its purest potential. And with engraving runes into it, can push said potential beyond a wielder's capabilities.

Community and cooperative work get encouraged in the culture of Dwarves. Treat everyone as an equal, but understand what their limitations are. Hence why if you know what you are good in, it is best to focus on a career in that area of expertise.

In a similar manner, everyone who cares for one another gets treated like a big family. Even nobles or royal blood amongst their kind can be treated as a close relative. It can make Dwarven life feel very connected, even if they come from afar.

A Dwarf dresses up for the occasion, wearing what's practical most of the time. The observant eye might even know what occupation one might have, solely on what clothing they prefer.

A common fashion sense for most is styling their hair and beard. One can downright know where a Dwarf comes from depending on their hairstyle. For some, even the types of ornaments or length of the beard can determine their position in society.

Dwarf Tossing exists as a form of entertainment for many Dwarves. Two enter the ring, using nothing but their bare strength to push the other outside it. Simple on paper, but it makes for great entertainment and a good competitive sport regardless.

Growing a long beard amongst rulers and nobles is seen as a sign of peace and prosperity. For some kings, they grow theirs until it hits the ground, showing decades of a peaceful ruling.

Only during conflict might they cut off their beards to declare their war. Said hair gets then send to the enemy to show they are serious. Some cases even have entire clans do it, making the sight of a mountain of hair a major threat amongst Dwarves.

Putting shackles on the freedom of men is to embrace the heart of a tyrant.
— Dwarven Saying

Amongst the few taboos that Dwarves have, tyranny and enslavement are above all. With their history being Fjallguth's slaves, they despise any form of dictatorship out there.

Tyrants do not last long amongst Dwarves, removing them from power quite quickly. Same goes for slave drivers, with many trying to find a way to free those enslaved by them. If they are lucky, they might only get cast out from their society to live in shame.

Origins
The Golden Age of Dwarves
The Fall of Frelshold

Dwarves came to being not long after the end of the Nõrdic Titan War. As the Titan Fjallguth fled into the Himminskalm, he took with him his Antomniae servants along, leading them all into the caves blow. There, he began his own kingdom, ruling over the race as a tyrant.

Over the years, if not decades, the Antomniae adapted to the harsh climate and working conditions. They got shorter, sturdier and built to endure, becoming the modern Dwarves. Some myths even say their stature comes from Fjallguth using them to be carried around.

Eventually, the Dwarves grew tired of Fjallguth's tyranny and made up a plan. Tricking the primal god to go into the mines, they made it collapse to bury him. To further ensure his demise, the Dwarves poured molten iron over the Titan, entombing him in a grave of steel and stone.

From there, the Dwarves became a free race, joining up with the outside world.

The Golden Age of Dwarves

For a long while, Dwarves became masters at their crafts and spread across the northern hemisphere. As a free race, they could go anywhere, leading to many kingdoms built in their names. Whether they be from Nõrdlann or elsewhere.

The Himminskalm became the home of the Dwarves, only accessible through the tunnels they made. Thanks to these underground routes, it helped connect the early era of Nõrdlann and the Dwarven kingdoms furthermore.

It became a golden age for them, leading to monuments getting built and cities established both above and below ground. An era where anyone from the north knew of their existence.

Things changed when on Nõrdlann when the main capital of Frelshold unearthed a new vein of ore. A copper-like material that quickly found its utility in decorations and ornaments across the city. But nobody knew the truth of the mineral until it was too late.

As it was worn and coated the streets, it began to spread like a cancer. Now known as Fleshmetal, it devoured the city in fleshy tendrils, taking its citizens with it. People fused together, buildings tore themselves apart, everything turning to rubble.

To contain it, the Dwarves collapsed the tunnels towards the capital, disconnecting it from the rest of the world. Any of the metal that was outside the city walls got contained later on.

With the fall of the capital and the tunnels, it didn't took long before the kingdoms lost their ties. Some fell into conflict, others grew away from one another. While some survived the fall with little to no problems, others vanished, leaving only behind ruins of their existence.

Dwarves don't associate themselves with the conflict of other species. For most of history, they tried to remain neutral. It does not mean though they are heartless, as their hospitality rivals that of Halflings. As long as a race is willing to keep their weapons down.

It is why you will find many other races co-exist with Dwarven settlements, either as neighbours or together in the same society. If given the time, one can form bonds so strong they are unbreakable. But at the same time a grudge can form if one exploits their generosity.

Despite popular beliefs of their hatred for one another, Elves and Dwarves do get along quite well. The issue is mainly their views on community, which do clash from time to time.

Oreads also have a special place amongst Dwarvenkind. Seen as earth spirits given physical form, most get seen as good fortune from the gods.

The only races they do seem to struggle with are Goblins, Hobgoblins and Drow. Due to a problematic past with the two, it leads to conflict between them most of the time. Whether it is for the warmongering nature of the goblinoids, or the enslaving and genocides by the Drow. 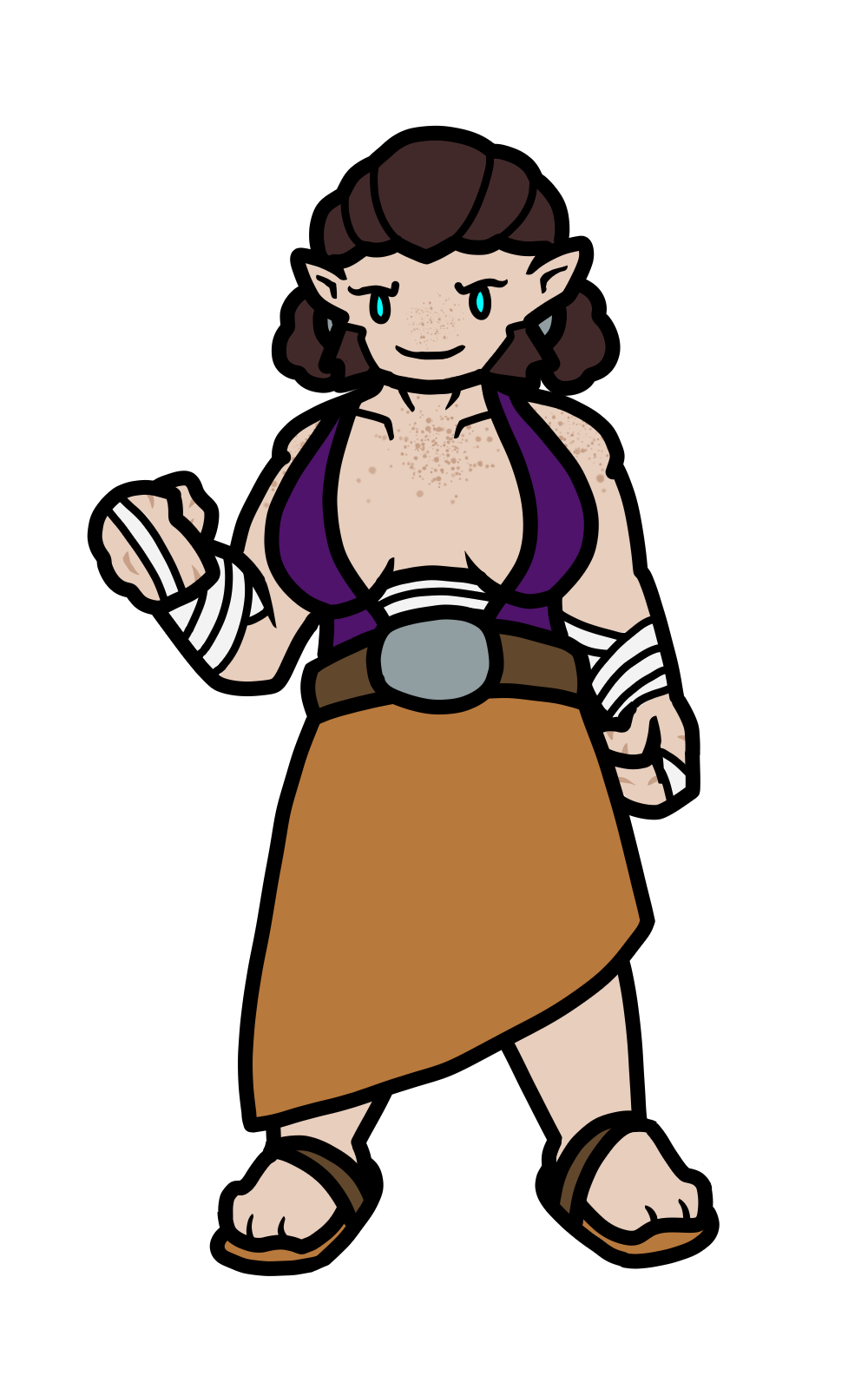 Dwarves explore to discover new lands and unearth secrets. Some do it in the name of their clan, others for their own reasons. Regardless of why they journey the world, many will try to keep the spirits high amongst the party. Either by showing their mastery in their craft, or their hospitality as a race.

A competitive sport where Dwarves try pushing one another out of an arena.

I absolutely love the visual of sending beards as a declaration of war.

They are Dwarves, and they're digging a hole..... Like the use of Diggy Diggy Hole.