In any decent city on any decent planet there is the part of town that the tour books don't mention. It's the place where the nights are a little longer, the police don't look as closely, and where anything is for sale, if you can pay the price. Even in that little corner of the city, there are varying degrees of ordinary. Straight-up places that are just what they say on the door and where you can get a meal or a drink without too much excitement. Shops with products that you wouldn't find in a suburban shopping mall, but again, just what you expect.   You'll find people from the rest of the city in these places. Some are out for a bit of excitement. Others are looking for goods that can't be bought elsewhere. A few might even think that they belong there, but by morning, they'll have learned that they were mistaken. With luck, they may even live to tell the story.   As you go deeper, you notice that there are doors that don't have signs. If you knock on one of these doors, a slit will slide open or the door might open a crack. Someone will look you over and decide whether or not you belong. If they think you do, you enter to discover...   Yeah, that's the point. You shouldn't be knocking on doors that you don't know what's behind. You might think that you're something special only to discover that you're in a whole other league. Everyone's heard the old line about bringing a knife to a gunfight, right? Well, in these places, you might find yourself trying to match your unpleasant disposition against folks who are considered foul-tempered in the seventh level of Hell.   If you're one of the locals, if you truly belong, one night you just might pass a door that you haven't noticed before. It's not quite like the others. There's no slit and no knob. There is a sign, though. A sign distinct enough that you're sure that you'd remember it if you'd seen it before. There's a name on the sign:
Worlds' End Inn
After you look around to see if this is some kind of a setup, you realize that the street is empty. You're alone. Even the sounds of the city are muted. The music, the laughter, the shouting all gone. It's just you and the door.   And as you move toward it, it opens unbidden. The inside is lit, but you can't make out any details until you step inside. Behind you, the door closes and a voice says, "Welcome. We've been expecting you."

Walking into the inn is always slightly disorienting. Passing through the doorway seems to take a moment or two longer than expected and is always accompanied by the feeling that one has stepped on to a moving platform, although the direction of motion seems to be something outside of the normal six-axis Euclidean space.   After passing through the door, customers find themselves in The Foyer.

The Worlds' End Inn prides itself on its service and has an extensive menu with delicacies from many worlds. With sufficient notice, almost any dish can be prepared, although diners are advised that the inn will serve meals with sentient ingredients, nor will the inn knowingly serve a dish which is likely to be toxic to the diner.   The bar is stocked with broad array of beverages. We are particularly proud of the beers, ales, meads, ciders, and wines that are produced specifically for our establishment. Our shelves are also stocked with some of the most magnificent spirits and liquors to be found. For those who prefer non-intoxicants, we have a selection of freshly pressed juices and the purest water delivered directly from the heart of an early universe nebula.   Customers are advised that the inn does not take responsibility for the effects of any food or beverage upon any individual. Those with allergies, religious beliefs, moral or ethical opinions regarding the consumption of specific items, and/or strong dislike of anything in particular are advised to order with caution.

The Worlds' End Inn operates in a thread of linear time. Reentering the inn, regardless of which exit you used, will bring you back at a time later than when you left. The flow of time within the inn is not guaranteed to correlate with that of external worlds, so it is entirely possible that a well-spent period of drinking and dining in the inn may have taken only seconds or many years on the customer's home timeline.

Many people have asked who owns and runs the Inn. The answer to this is simple, but the implications are profound. The Inn is a sentient, independent entity that decides many issues for itself. In particular, the question of where (and when) a door might appear on a world or for whom the door might open is complete up to the Inn. 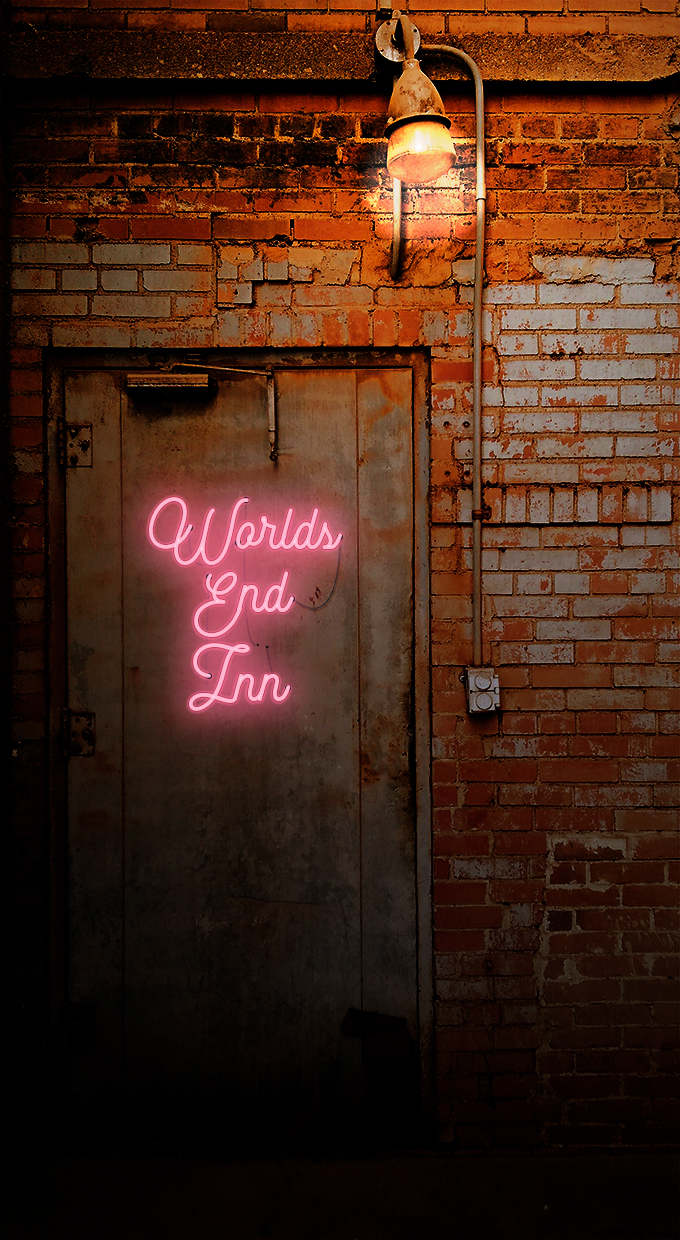 The Inn's grand hearth. A place where all those who are lost and all those who think they know the way gather to tell tales of Worlds.

The Main Hall of the Worlds' End Inn is the place for dining, drinking, entertainment, and meeting friends.

The Foyer is the entry to the Worlds' End Inn through which customers must pass.