Air Touched Orb Vines can be an wonderful choice for a garden. I advise letting them hang in the air instead of trying to make them float in water. They can be quite rebellious little plants and like to reach for the sky.
— Jalun, Kohtilan plant seller

Some of most common wind touched plants of the south, Wind Touched Orb Vines are prized for their elemental abilities and ornamental value. Their round fruits are the source of their name and their popularity as decorative plants as well as their ability to float in empty air as well as water. They are also valued for their medicinal uses and other abilities both real and rumored that their elemental magic grants them.

They're quite delicate and airy looking but they're much more durable than you would expect. Unfortuantly their true beauty can only be seen in a thunderstorm.
— Jalun 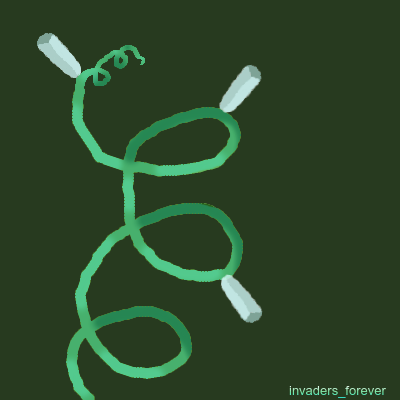 by invadersforever
The vines have long slender stalks that are rooted to the ground on one end with the other end floating freely in the air. The vine tends to grow in swirling patterns in shapes that resemble half arches or snakes curled towards the sky. Their leaves, flowers, and fruit are thin and translucent. The leaves are large and vaguely wing shaped; the vine waves easily in the wind causing the leaves to appear as though they are flapping. The fruit is large, round, and mostly hollow with three large seeds clustered near where the stem meets the outer shell of the fruit.

Like other Orb Vines, Wind Touched Orb Vines can reproduce through the seeds found in their fruit or through cutting off part of a stem and placing it in water until it begins growing roots. The latter method is usually done by herbalists. As elemental magic is fickle, the majority of Wind Touched seeds grow into non magical Orb Vines and many air touched vines grow from non magical plants.

For how popular they are, they are surprisngly easy to care for. After you put them in the soil, they do all of the rest of the work. That might actually be why they're so popular.
— Jalun

Once the seed or cutting sprouts it begins growing leaves and developing loops and curves. As it increases in length it will continue to form loops and other knot like patterns. The vine typically flowers in summer or fall and fruits in fall or early winter. The vine will continue to produce flowers and fruit for many years but it does not grow much after its first year. When it dies any part of the plant that is not supported falls to the ground.

People always seem to be surprised to find out that Wind Touched Orb Vines can be quite the killers. I guess they forget that plants don't care about beauty, they care about survival. Anyways, you'll want to leave them out in the open away from other plants to keep the vines from smothering them.
— Jalun

Wind Touched Orb Vines can be found scattered amongst nonmagical Orb Vines which grow along the banks of streams, floodplains, forests, and other environments in tropical or sub-tropical areas. It has been known to survive in temperate environments although it usually lasts only a year or two in these areas. Like other Orb Vines, it is adept at smothering trees, shrubs, and understory vegetation. Instead of growing directly on this vegetation like its non-magical counterparts, Wind Touched Orb Vines instead grows so that it hovers over other vegetation, cutting it off from sunlight. Animals rarely eat the vine due to its lack of substance and nauseating taste.

Due to its round shape both living and dead vines are often used for decoration. Oftentimes living vines are used as decoration due to their levitation properties and their fruit's ability to float in water. They are popular garden plants both in their native regions and outside of them. When fruiting they can be used as strings of living lanterns as the glow of the seeds combined with the translucent skin to cause the fruits to appear to glow faintly in dim light or darkness. The fruit is also used in game as balls as the skin is more durable than it looks; often the fruit is filled to give the ball weight. Many people swear that balls made with Wind Touched fruits fly better than those made from other Orb Vines' fruits.

Orb Vines can be used in many different medicines, if you can get past the taste that is!
— Jalun

Like other Orb Vines they can be used as ingredients in a variety of medicines. The roots when ground up can be used to treat a variety of stomach problems including Wicked Stomach. They can also be used to improve the removal of waste from the body through urine, feces, or vomit. When applied to the skin ground roots or leaves can relieve pain and inflammation for a brief period of time. The leaves can be used to stop menstruation. Wind Touched Orb Vines' roots have a sickening taste and sometimes cause a brief tingling sensation in the mouth. 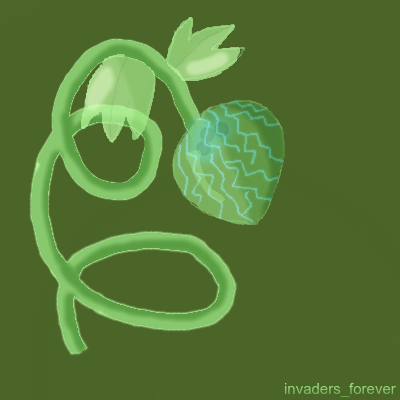 by invadersforever
The vine can be used to create elemental elixirs and some claim that eating the seeds of the vine grants some of the power of the plant. Like other air touched plants and animals, Air Touched Orb Vines are considered to have protective properties against the dangers of thunderstorms. This takes the form of hanging them around buildings, wearing makeshift jewlery made from the vine, eating parts of the plant before going out into a storm, or offering it to the deities or Aros . A common practice is to lash air touched plants to the mast of a ship before leaving port to ward off storms.

I've heard of people taking them as far as Virse and the vines surving for some time there. I don't advise trying to do that.
— Jalun

The vines' natural range is in southern Ostari including Kohtil and southern Istervyn . They have been known to spread past these areas with quite a bit of success.
Flora and Fauna

I love the description of the plant plus the art. I have a really great image of what this would look like. I also really like that it has a nauseating taste.

Thank you! Yeah, I think the art really helps to convey what it looks like.

Really nice plant and lovely pictures you added. This seem like quite a nice plant for decorating a garden :) The images helped very well with picturing it. It must be quite something to behold to see it pulse with light during a thunderstorm. The protection from lighting was a nice touch as well, especially since they use it in the masts of ships.   Thanks to the quotes and images the layout looks very good. Nice article!

Thank you! Sadly I can only imagine what it looks like in thunderstorms. Maybe later I'll see if I can convince invadersforever to do art of that.

Great article! That seems like an interesting and useful plant. I like the bit with the protection against storms. It also sounds and looks very pretty, nice illustrations!   I like that image " They can be quite rebellious little plants" XD   " As elemental magic is fickle, the majority of Wind Touched seeds grow into non magical Orb Vines and many air touched vines grow from non magical plants." I don't think you've properly explained the difference between the magical and non magical version. Do they look exactly the same but one is magical and the other is not?   "Instead of growing on this vegetation like its non-magical counterparts, Wind Touched Orb Vines instead grow over other vegetation cutting it off from plants." I don't understand what you mean here. Or do you mean that it doesn't need to grow over other vegetation?

Thank you! I'll work on clarifying the differences between the non magical plant and the magical one. I'll also clean up the growing over sentence. I meant that it floats over plants and keeps them from getting sunlight instead of having to grow directly on other plants.

This one seems nice, definitely something people can come up with all kinds of uses for.

I really like the description of your plant combined with the images. It really helps to imagine how they look like. I also love how this plant has so many different uses, some of which (like the protective powers against thunderstorms) seemingly being more myth than fact.