Brain gnats is a general term used to describe a wide array of sentient entities without physical shape. Taking the shape of legends and stories, they lodge in individual minds, and are spread through subconscious communication or storytelling. From relatively harmless to capable of destroying entire cities, they tend to slowly increase their influence over their host's mental capacities and force them to spread.   The following section gathers information obtained by Gretsor Barren regarding the common characteristics shared by most brain Gnats, examples of their cultural impact in different regions of the Cylinder, and historical cases of notable gnat infestations.

While they vary greatly in nature, scale, and dangerosity, brain gnats all share one primordial characteristic: they are entirely mental entities. Brain gnats exclusively exist as parts of the Consciousness Flux. In fact, in most cases, they exclusively exist within the boundaries of their host's brain and mental influence.   Brain gnats typically take the shape of a story, legend, or part of a local folklore. They are defined by the nature of their story, the average influence they have over people, and the extent at which they spread spatially. Because they are purely mental constructions, these entities are generally destabilized by sapient chaos. As such, they are virtually non existent in high population density areas. According to several sources, gnats also seem struggle to thrive in environments dominated by nomadic populations. It would seem nomads are often well-educated on gnats and methods to avoid infection. Their mental hygiene, barriers, and natural tendency to avoid any suspicious envounter make the spread of a brain gnat harder.   Sedentary, rural areas, however, usually lack both of these defense mechanisms: populations are neither dense nor educated on mental matters enough to avoid propagation. As a result, such areas are usually riddled with a variety of gnats occupying the shape of legends, myths and local folk tales. Brain gnats grow in two ways. Firstly, they tend to increase their influence over their hosts. From the host's point of view, thoughts and actions revolving around the myth or story the gnat consists in represent an ever increasing fraction of the time. In the case of a particularly advanced infection, the host appears to be obsessed by the cultural object the gnat is based on. Their thoughts, actions, and even perception of reality are altered by the gnat. In fact, this can reach a point where some of the host's relatively basic functions are affected: they can lose the ability to speak coherently. They may lose their sight and live in a constant hallucinogenic nightmare. Some cases have even been observed where the subject lost their ability to walk, or to stand upright. 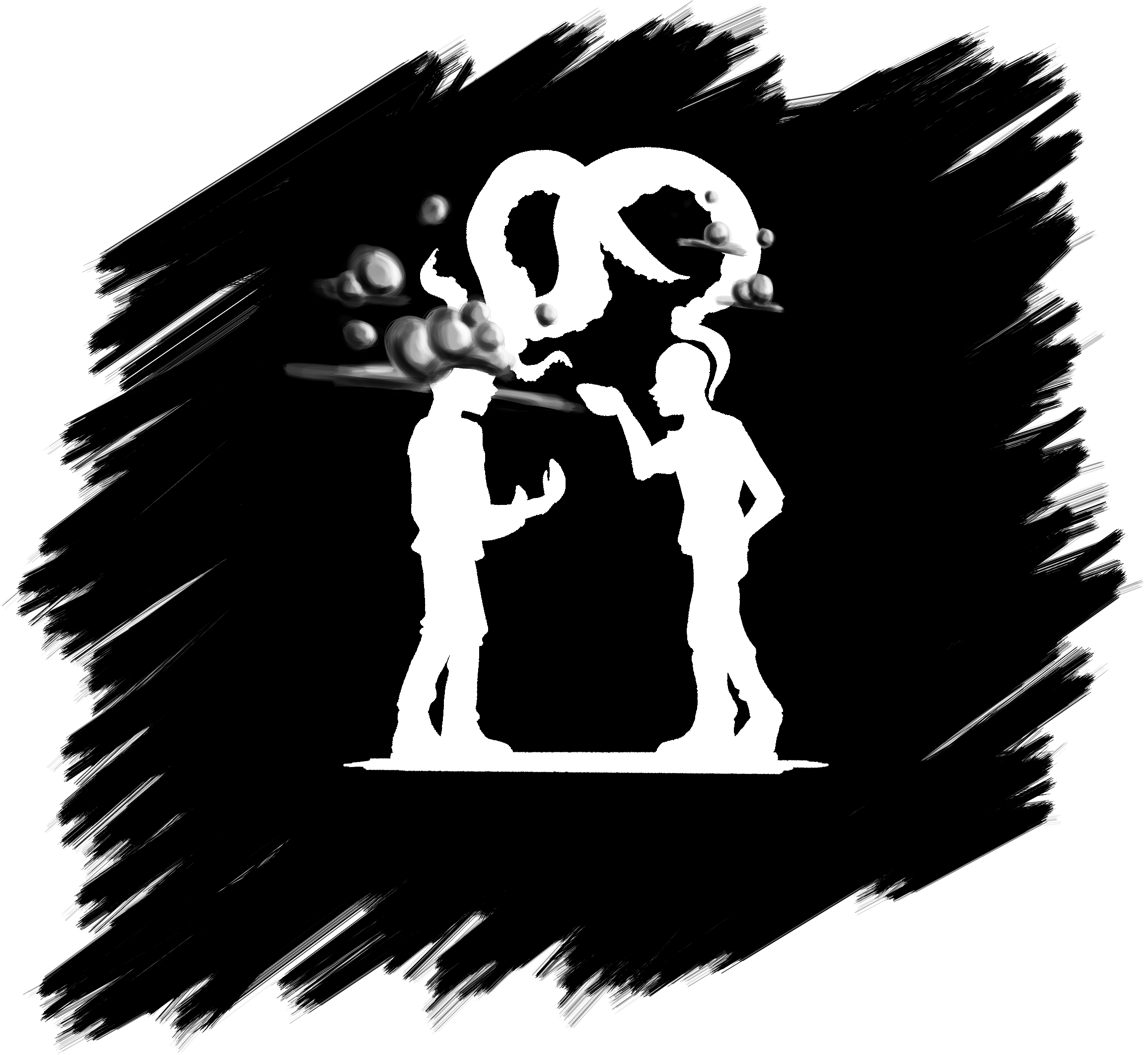 by Pouaseuille
In addition to that internal growth, brain gnats constantly need to spread to new hosts. One host is always subject to the risk of dying, or being cleansed of their infection, which would effectively destroy the gnat. According to common beliefs, brain gnats are said to spread to other hosts through direct communication. As a host tells the gnat's story to an audience, that audience learn about the gnat's manifestation, and start being affected by it.   This is a deformation of the scholar point of view. In reality, most brain gnats are thought to posess a "core consciousness". That is, in addition to their simple presence and natural tendency to spread inside their host and toward new hosts, they posess either a sense of individuality to some extent, or at least a complexity that is higher than that of a simple story. These entities are capable of taking over an individual's relations with the consciousness flux. As a result, their spread toward new hosts is not exlusively the result of the host sharing their story. It is also the result of a deeper interaction with the host, mostly unconscious from both individual's points of view. In such a situation, the contamination of a new host is not exactly caused by the sharing of a story.

A power over the crowds 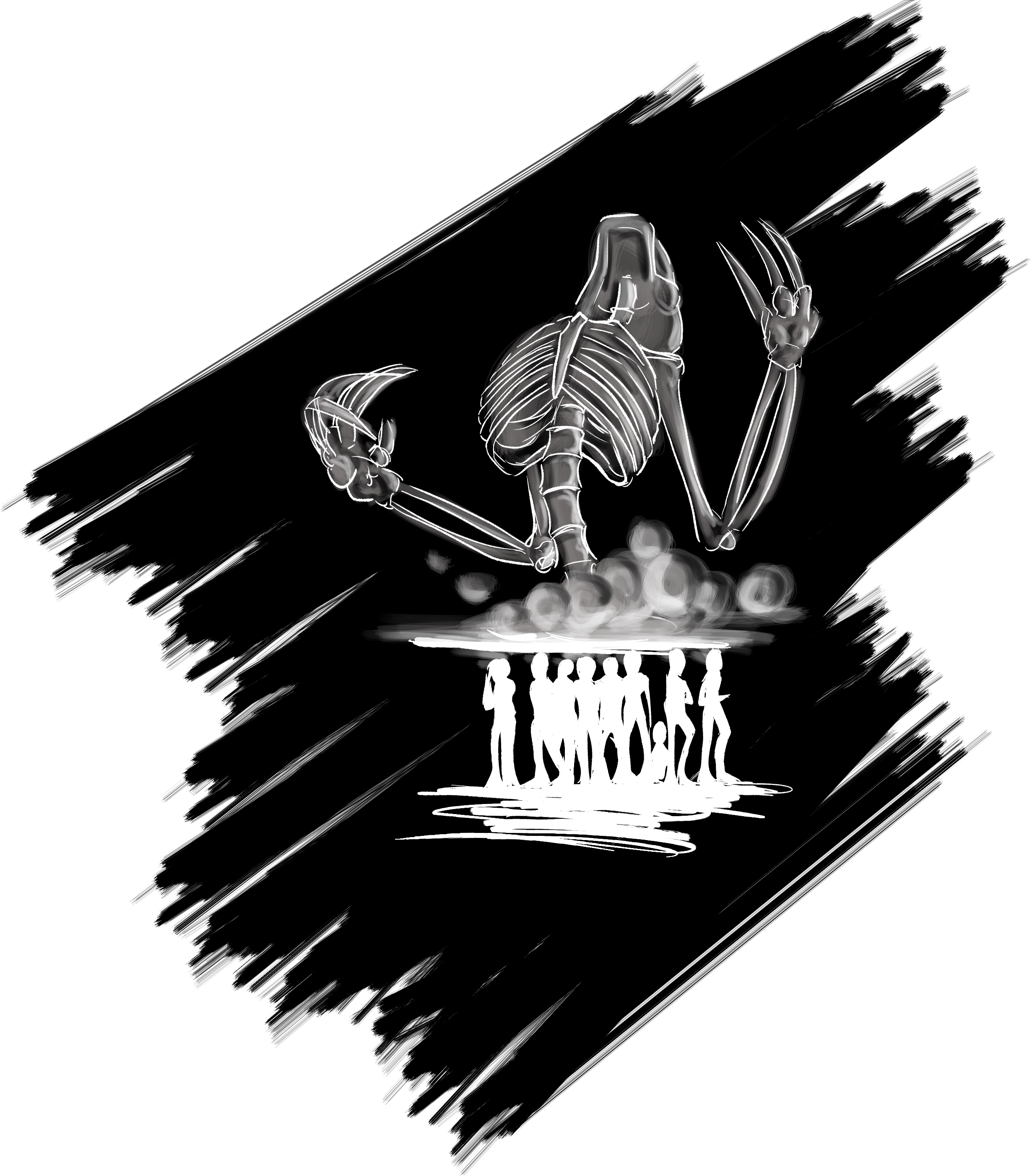 by Pouaseuille
A particular subcategory of parasites, sometimes called crowd gnats in the literature, are or higher concern than others. Indeed, the case of most brain gnats, as the infected population increase and the gnat spreads over the distance, it loses its coherence. At some point, the gnat will either divide into two separate and competing individuals, or simply dissolve back into sapient chaos. However, in the case of crowd gnats, this is not what happens. Crowd gnats manage to retain their individuality as a story over the distance or the population. As they spread, their influence over the local consciousness flux grows, and so does the amount of mental power they can hijack from their hosts and surroundings. In fact, some of the higher forms of crowd gnats have been proven to generate collective phenomena such as grouped hallucinations, some of which can even be shared by individuals who are not infected by the gnat itself.

A portion of the document is currently undecipherable. Parts of the parchment are deteriorated, and symbols of other portions were altered and cannot be understood as it is. Several groups of spelunkers have been sent to the deeper Library galleries in the hopes of finding another copy of the document. Restoration teams are also at work on this folder.

The following documents were gathered over time and actualized even after the initial publication of the section by Gretsor Barren. They consist in other scholarly articles and prose wherein Brain Gnats were mentioned.

Ghost stories and where they come from: Examples from Middish folklore

The Books of Life

Really fascinating. I can see them being responsible for things like mass hysteria in some cases. I really like that the prevention section is lost to time. D:

Oh these are fascinating! I love the fact that they take the shape of folklore and tales, its such an intriguing concept. Awesome work!

Woop woop! Congrats on the feature!

Come and join my Discord or check out my world! And While your at it, have a look at my Worldember Articles!