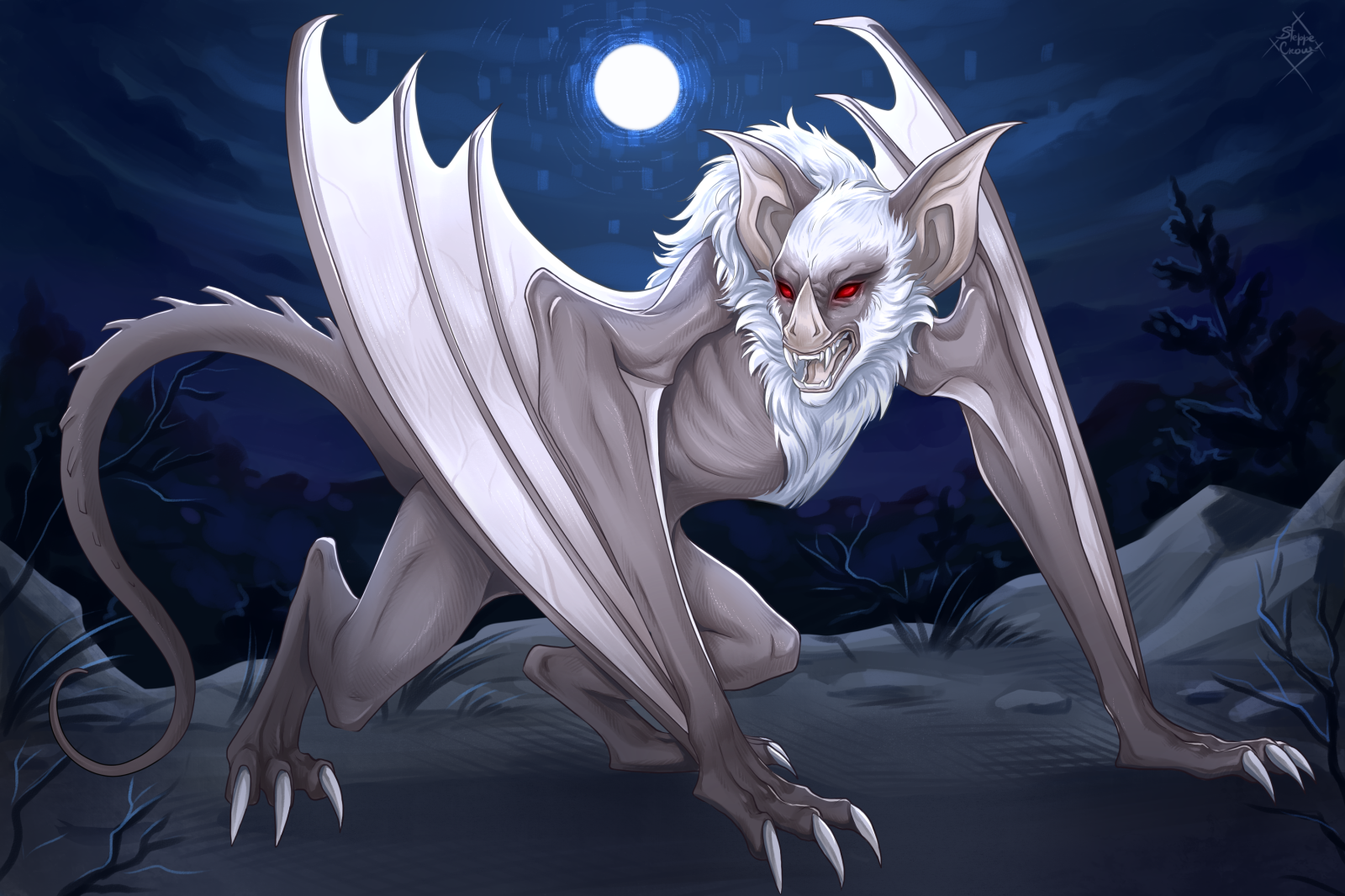 The Chronicles of Evalaw    Bestiary      Xiiealiru
Appearing like something out of a nightmare, these savage hunters are a plague upon the land. Spoken of in hushed whispers by farmers and peasants across the land. Carrying off and decimating entire herds of livestock, and if some stories are to be believed, snatch off children or laying waste to entire villages and leaving no survivors. These beasts are the Xiiearliru, called Vaughasts amongst the common folk of the countryside. These great bat wyverns of the fells, are thought to be amongst one of the largest mammals that dwell in the underworld, yet despite their underground roosts, the moon drenched lands of the overworld are their hunting grounds. 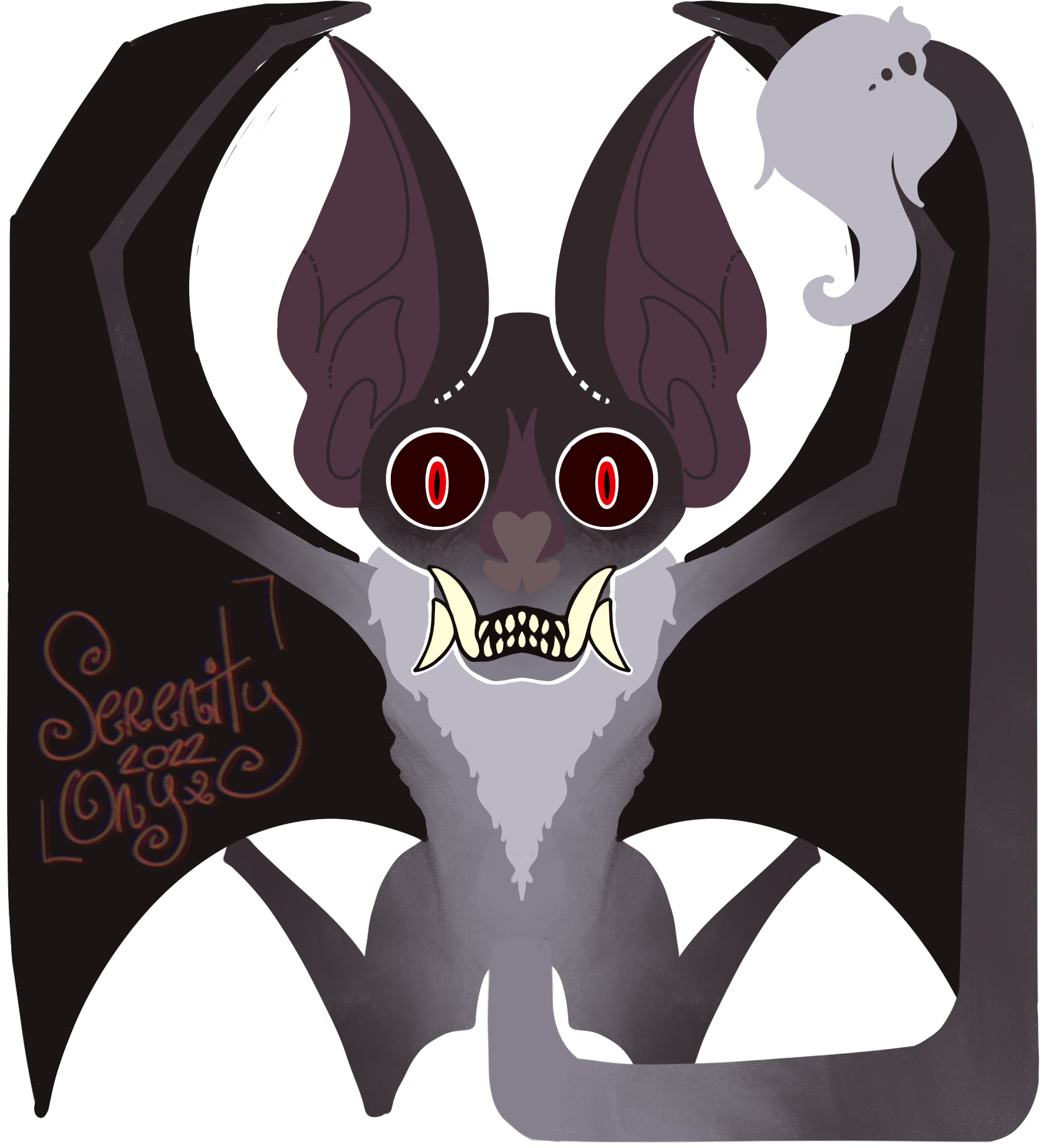 
…These abhorrent monstrosities are a plight upon the lands of men. Feasting upon the flesh of the innocent and plucking helpless babes from their mothers bosom without mercy. Their very existence is a sin against all things sacred…
— The Venerable Teague - Codex of Beasts and Beings, 3rd edition.

Roosting in cavernous spaces of the The Forgotten Paths and the ruins of long abandoned Dwarin holds in the roots of the mountain. Tending to leave these roosts several hours after sunset, these ferocious nocturnal hunters, emerging from the deep caves and caverns in the mountains they call home into the open nights skies of the world above. The Xiiealiru is a veracious carnivore, specialised to hunt mammals, primarily preying upon livestock. However when food is scarce they are known to also feed upon humanoids, most commonly villagers or travellers unfortunate enough to tarried too long in the open wilderness late at night. It's prey may be taken at or to the ground, where it is pinned down and enveloped with the wings before being killed with vicious bites to the neck, it's sharp teeth and strong jaws are able to subdue animals as large as a horse. Preferring to consume, head first, discarding the feet and inedible parts while butchering it's quarry. It's this savage method of feeding that has earnt the Xiiearliru notoriety. 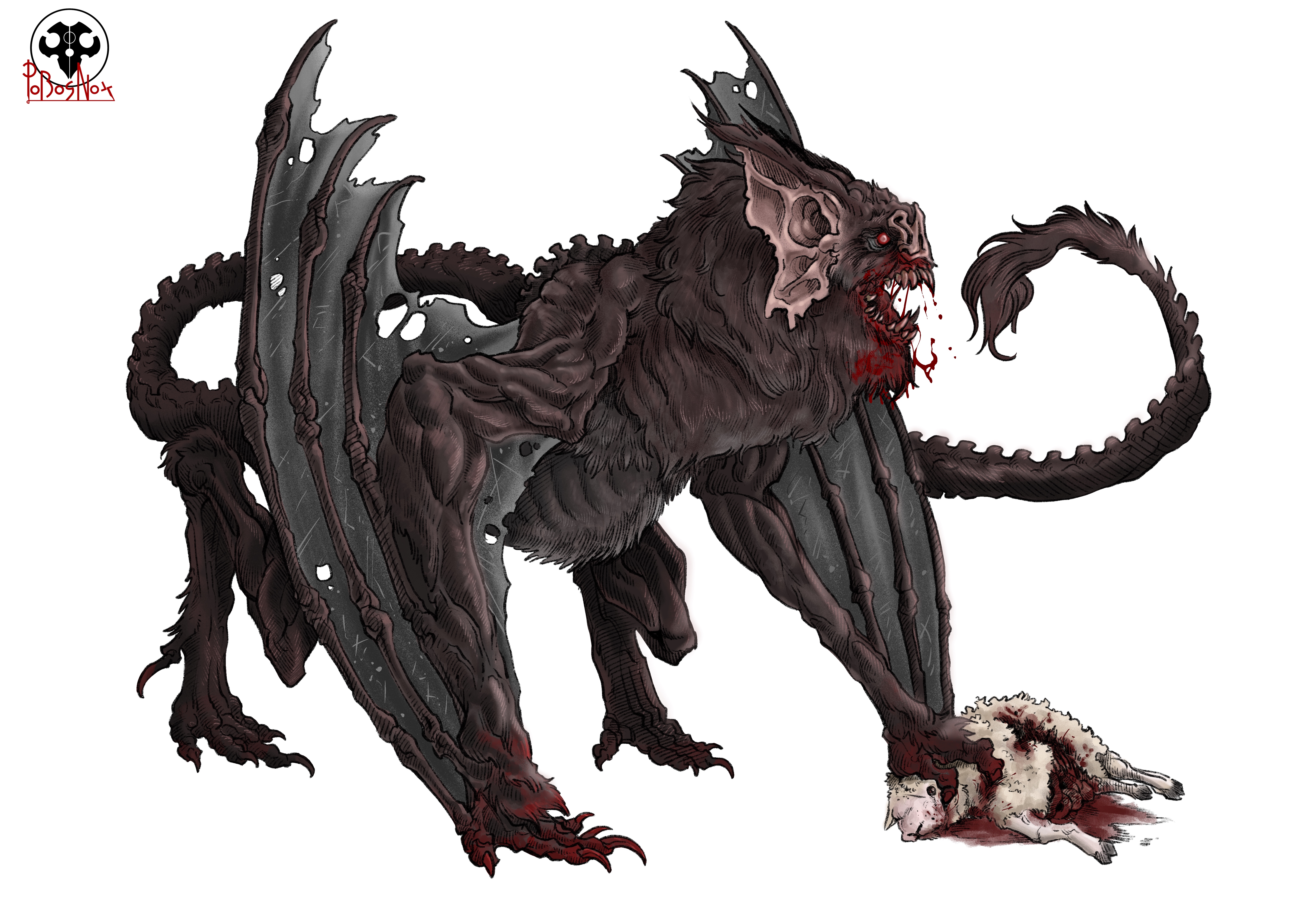 Agile and deadly predators, the Xilealiru utilise echolocation to navigate the tunnels and caves of their subterranean nests, emitting a clicking sound with which they navigate and hunt in the darkness. Possessing highly hearing, able to pick up the most minute of sounds. Despite its advantages, their highly sensitivity does possess a drawback, sudden loud noises can stun render them incapacitated for a short period of time. 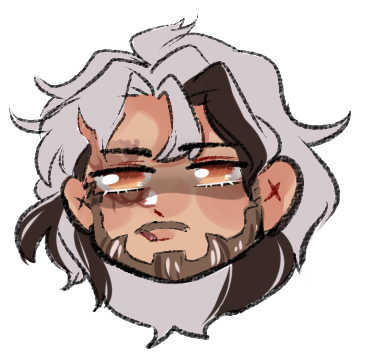 If you've got a Vaughast nesting, you've got a serious problem. Particularly when they'v picked the nearby farms clean, that's when they'll start looking toward you and your neighbours for their next meal...
— Lucien of Cynwall, professional monster hunter.

Quite often, Xiiearliru become a pest that cannot be ignored, not only to the simple country folk they terrorise, but to the Dwarin communities in their mountain holds. Whereas towards simple Human peasants the atrocities they commit are out of predatory nature, towards the Dwarin they are territorial and violent as they protect their roosts, or seek to expand them further. The Fells, where they are thought to originate from are filled with violence and danger, even for the Xiiealiru. Whereas the ruins of the Dwarin and dry and secure. However, more and more have begun infesting and establishing colonies where they are not wanted.
Geographic Distribution
Diet
Small to Medium Mammals (Primarily live stock Sheep, Cows, Pigs, Horses, Goats and Deer and Humanoids.

It is primarily found widespread among human lands where numerous legends and folk stories surrounding the Xiiearliru are thought to have originated. Known as Vaughasts amongst human societies many of their superstitions linking Xiiearliru to vampires. While you could be forgiven for associating these giant carnivorous chiropterans with the vampiric fiends of legend that stalk the same night skies and prey upon the innocent. With much of the folklore and oral traditions found throughout the darker places in Evalaw telling that the Vaughasts are a Vampires true form. When they are in fact anything but related, yet this does very little to stop such stories becoming a widely accepted as truth.   The depths of this belief goes so far that wards and protections traditionally reserved to ward off vampires and ghouls are used to attempt to keep the Vaughasts at bay no no avail. Those that have confronted, or even manage to snare the beasts, naively believe in such superstitions themselves. Going so far as to steak them to the ground, in the hopes that when dawn approaches, they will be reduced to nothing but a pile of ash. 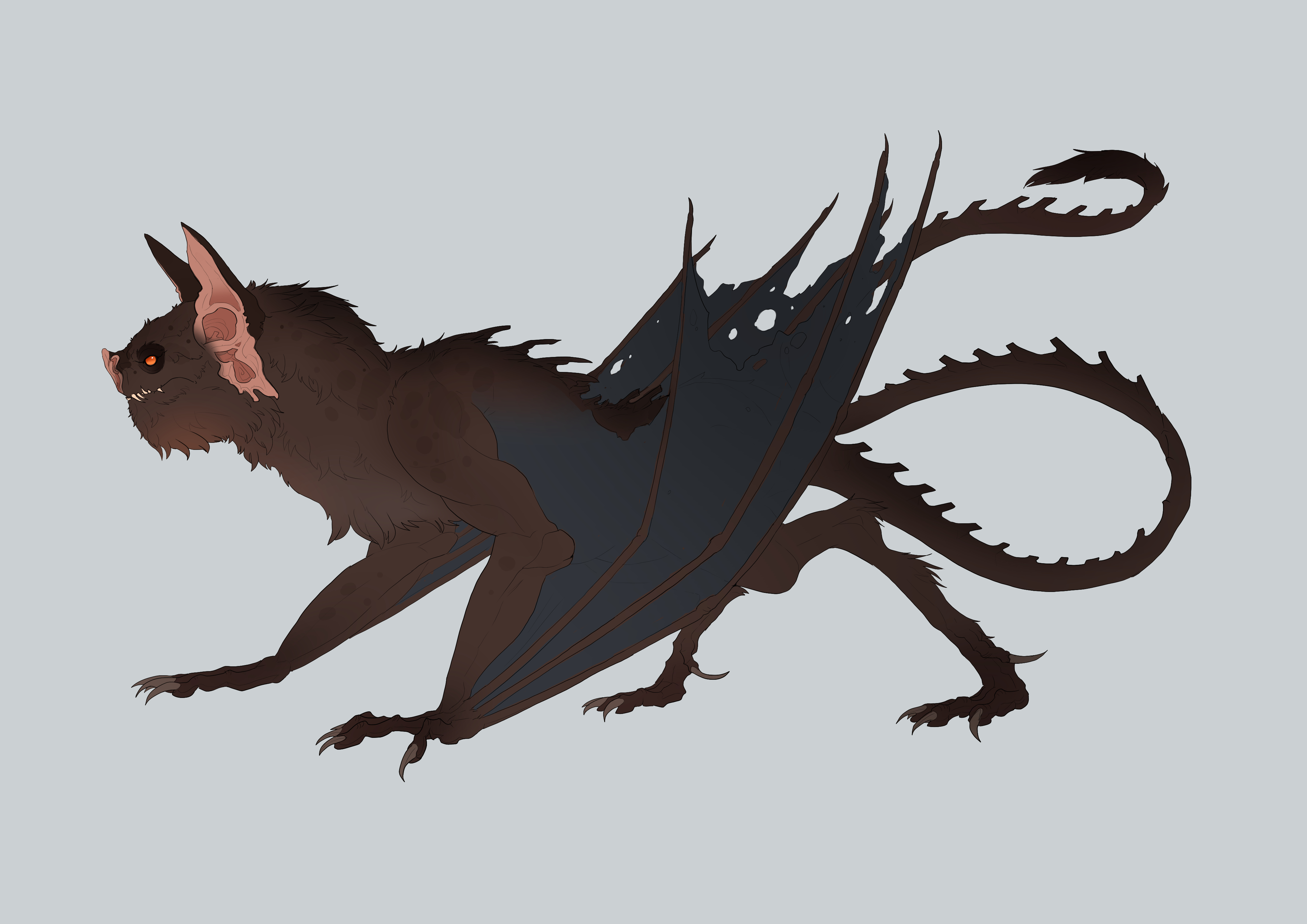