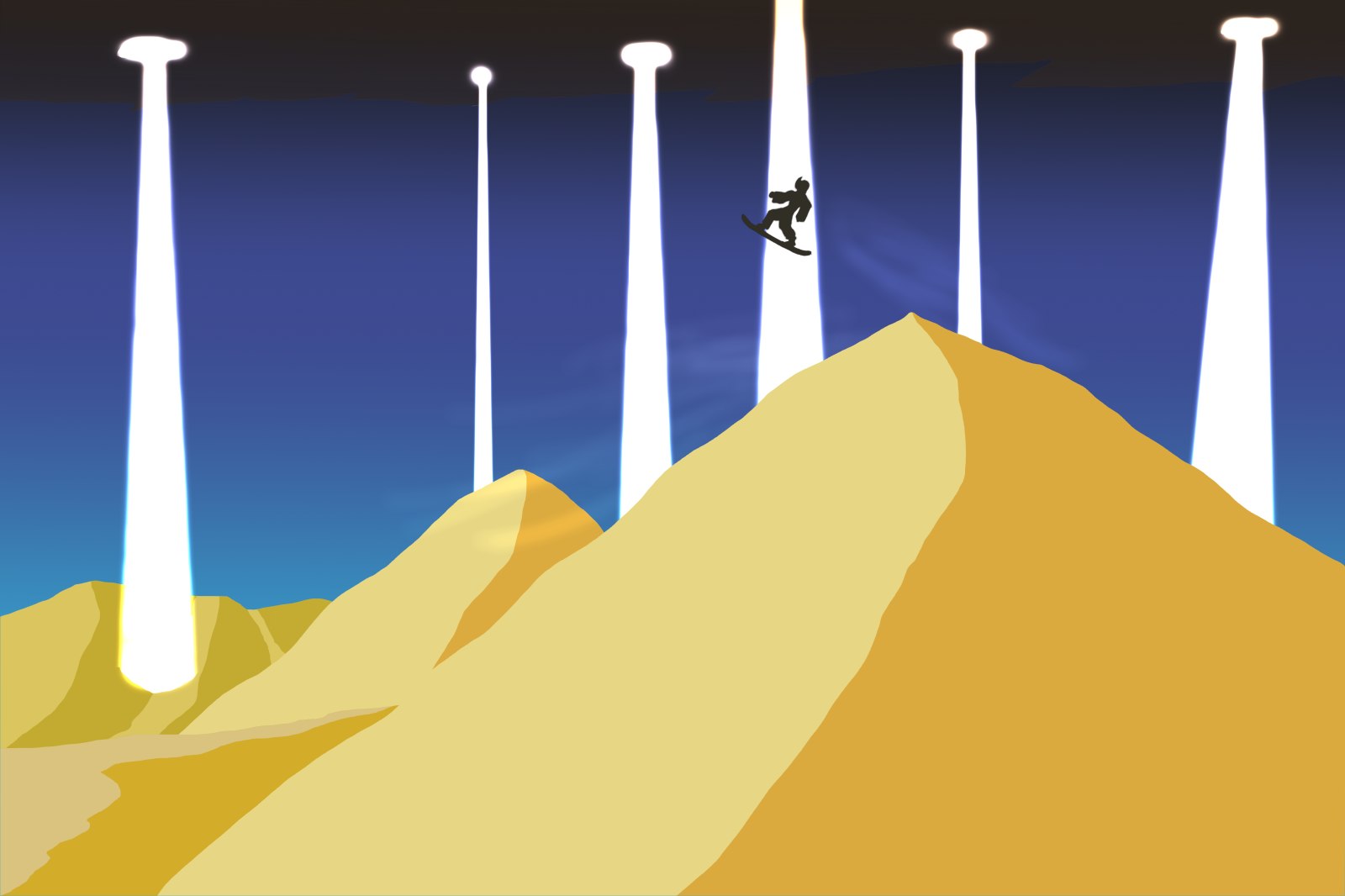 Eliah climbed up on the dune. It was the largest one in the area. With every step, his feet would get buried in the sand, and with every step he would need to pull them out. The task was exhausting, especially with the burden he had on his back. Still, he traveled upwards. He was only eight, a child of The Pit, and his path was traversed by many before him.
After what felt like hours for him, he reached the peak of the dune. He finally took off the thing that weighted him down off his back. His own sandboard.
He placed it on the ground and then placed his both feet on it. Leaning a little forward he set it in motion. It was the first time he surfed on the sand. The excitement and the fear mixed within him, making his heart beat faster and faster.
Seconds later he was at the bottom. He leaned backward, slowing the board and then stopping it. As he did it, he could hear numerous cheers coming from the direction where his tribe was. He raised his little fist to the sky, proud of himself.   He was ready to become a hunter.

The sunlight that reaches The Surface Layers is an incredible force of nature. It can burn the unprotected skin of living beings in a matter of seconds, and completely bleach their fur. It also has corrosive properties, turning into dust and sand everything it touches. Because of that, contrary to the chaotic and varied landscape of The Pit, those layers are completely covered with countless dunes.   Those two properties turn the travel there a dangerous chore. Using mounts would require large amounts of food and water, while most vehicles would need to be completely covered with protective oils almost daily. However, that didn't stop the nomadic People of the Surface from searching for a way to traverse large distances quickly. And their answer came from above.
The nomadic tribes learned pretty quickly that if they want to survive, they need to use anything they can.   At first, they would cover pieces of wood they would find or buy from the lower layers in protective oils and use them to surf on the dunes. It would last them a while as the wood would soak them inside. However, it only helped them while traveling downwards the dunes. Climbing up still required full effort. Still, thanks to them, hunting the Beasts from Above would become a little safer. And as more and more different Beasts fell, the People of the Surface began to use their parts to upgrade their sandboards.

The parts, their origin, and their use

The only part required for travel, most of the boards are made out of carapaces or their segments of the Beasts. In contrast to the materials that come from the lower layers, the board made out of them doesn't need to be covered with the protective oils. The bodies of the Beasts are naturally resistant to the destructive properties of the sunlight. It has been discovered that different species produce boards that vary in their speed, acceleration, and maneuverability.   Additionally, there is one more property all of them share, that still hasn't been explained. Whenever they touch the sand, they start to slide as if on the ice. Because of that, for trained users, it is possible to climb the dunes smaller than the starting one just by using momentum, a feat impossible when using the wooden boards.

An upgrade to the sandboard, the sail further increases the board's ability to climb the dunes, making it possible to continuously move upwards with only a small loss of speed. As there is almost no wind on the Surface Layers, almost no one tried to implement the sails into the board they built for a long time. But, according to rumors, one day, when carrying the various body parts of one of the Beasts back to his tribe, an unnamed hunter felt something pushing him forward. Upon further inspection, he discovered that the webbed legs that the Beasts use to glide would start to tense up as if the wind was blowing into them. After returning home, he started experimenting with them.   He was the first one to repurpose them as the sails and soon, many others followed.   Soon, one of the researchers from the layers below decided to further examine those organs. Both to his disappointment and excitation, the webbed legs stop working the farther they are from the Surface. According to his hypothesis, it's the sunlight that gives them their mysterious property.

"I'm telling you, it looked like they were flying!"

Not long after discovering the properties of webbed legs, the People of the Surface began to add different Beast parts to their boards, just to find some new trait they could use. Most of those attempts failed, not giving any results. However, one of those that ended in success was the use of gas bladders that Beasts use to fly.
Adding the gas bladders that are still filled with the gas to the board drastically reduces its and its user's weight. By placing the right amount of them and in combination with the sail, it is possible for the user to begin to glide for long distances at the cost of the maximum speed of the sandboard.

Five years have passed, and Eliah was about to take part in his first hunt. He still wouldn't be given a speargun for another year or two, but adults expected him to help with carrying the spoils of the hunt.
His board has been upgraded. It wasn't a simple plank anymore. Now it was way bigger and it had a large sail. He would share it with another kid his age. It was their responsibility to steer it and to load it with meat and other parts.   The two of them placed their hands on the sail and began to push it. As the board began to move forward, they jumped on it. The hunters passed by them.   Once more Eliah could feel the same excitement he felt five years ago.

Rarity
Common amongst most of the Surface tribes.
Length
Between 1m for the personal sandboards and 5 meters for those used by the caravans.
Speed
15-20 km/h average. The upgraded boards sliding or gliding down the large dunes can reach up to 40 km/h.

Ever since their creation, the sandboards have been used to hunt the Beasts from Above. Their introduction greatly changed the strategy used by the hunters to hunt the flying species of them. Instead of hiding, creating an ambush and hoping for the best, they could act more confident and risk less. Today, the most often used strategy is for them to stand in the line as the Beast comes from the Surface or the higher layer, and shower it with the projectiles, destroying as many of its gas bladders as possible.   Once the beast loses its ability to fly, one of the hunters takes on the role of the bait. They will shoot vulnerable spots on the Beast, trying to get its attention. Once the creature starts to chase them, the other hunters start to attack its vitals. If the Beast changes its target, they take on the role of the first hunter. This is repeated until the Beast is killed.

With the growing advancements related to sandboards, people began to produce bigger and bigger models. At first, it was done to increase the amount of Beast flesh and body parts that hunters could move in one go. The sandboards evolved into sandboats. More and more people could use them to travel at once. They became a common sight at the Surface Bazaar.   Lastly, a year or two ago a rumor emerged. It says that there is a tribe that tries to create a moving settlement completely out of Beast's body parts.

Just close your eyes and go forward, leaving everything to fate.

Once in a while, People of the Surface need to clear their minds. It could be either to calm their nerves before the big hunt or a duel, to focus their thoughts or to relax after a stressful time. To do that, a lot of them climbs the highest dune in the area and begins to slide down it on their board with their eyes closed. At that moment it doesn't matter if there is a danger around, be it Beasts or the sun rays piercing through the higher layers. They let the gravity and their bodies lead them forward.   Some die or are never found again. Some return after a few hours, having found what they were looking for. But sometimes, their journey leads them to something. A preserved ruin, an item hidden in the sand, an oasis or back to their tribe.
Most consider that a sign from The Tree or any other gods they worship.
That journey changes them, giving them a new purpose in life.

Tribes that reject the sandboards

As funny as it may seem, there are a few tribes that reject sandboards. According to their members, the Tree placed them in a hostile environment that are the Surface layers to test them and anything that doesn't come from The Pit is an affront to the Tree. As such, they often attack those who use anything made out of Beast body parts, such as sandboards.