The island was first settled at the beginning of the Sixth Astral Era. With the plague of early piracy sweeping from La Noscea and Thanalan the fledgling city state of Ul'dah had made the decision to establish an anti piracy outpost upon the outer isles. Overtime as control was brought to the region the garrison was steadily reduced. Every passing moon cycle they would dwindle, until eventually the facilities which lined the dirt cracked ground would begin to fall into disrepair. By the time the curious Miqo'te had happened upon it the structure was crumbling to ruins. Masters having long since forgotten about the outposts existence, now it was simply another drifting place for lost Miqo’te who would not fit in elsewhere.

As the boundaries of civilization expand they often come in conflict with the natives. Such was the case for the early residence of the Panshaw. A coastal Miqo tribe had found their hunting grounds slowly eroded by the arrival of frontiersman from Ul'dah. The city states brutal march and acquisition of both land and resources left little for the small errant tribe to survive on. As such tensions quickly began to mount between the two, starting of with small squabbles, attempts at negotiation and the stray beat down. Until armed conflict finally became inevitable and so the tribe would make its decision. Rather than fight the numerically and technologically superior foe, they set sail with what little belongings they could strap to their backs. Days felt like weeks as they scoured the oceans. Finally, whether through luck or providence, the weary tribe found the shores of the abandoned island and quickly set up a new home.   Overtime the island would slowly begin to reclaim its previous growth. While no longer a garrison to ward of piracy, a fishing village would instead begin to take its place. Growing out of the formerly erected ruins only to rise as the newly established Panshaw. Pearl diving became both sport and profession for many of the denizens, servings as the isle one finate luxury resource. Rumors began to reach the mainland that tribes and individual Miqo’te were migrating to the tiny island. Save for the pearls, Panshaw was mostly without resources. The earth was poor and farming took more work then it was worth. Having no lasting financial reason to secure the island an envoy for Ul'dah was dispatched to the island. With negotiations followed by the signing of an accord the isle is recognized as territory under the noble protection of Ul'dah.

Upon their first arrival to the Miqo governed isles, the members of the Garden were greeted with the sight of an near destitute village. Their reason for seeking and then traveling to the strange isle, had been the acquisition of a rare breed of flora for the crew’s head shadow. The flower itself had been said to grow somewhere upon the tiny speck of land. Venturing into town, the Mayor, a miqo by the name of Zedi, was quick to greet them with skip in her step and panic hidden behind a obscuring ledger. She apologized for the mess and explained that bandits had been robbing the island of its wealth for some time, and that the villagers could do little about it. Situated to the north, the mayor told them (after being coerced to part with the location), that the crew would not be able to retrieve the flower as the bandit camp was on top of it. Any poking would simply invite further retribution down upon them.   Undeterred, the crew members ventured out to investigate the bandits. While Aifread vanished from sight, sneaking around the ruins and shadows to gather her flowers, Cor'sair Boon attempted to speak to the bandit leader. Negotiations, while seeming successful at the start, quickly turned south, as his grand imposing speech caused the bandits to begin fearing an attack from the village. They gathered their arms and prepared to attack only to be stopped by A'kaia Yohko. Subduing the bandit leader with a single tug at his ear sent the followers into a panic. A'kaia dragged the ruffian by the ear to the village and was heralded as their savior.   With thunderous cheers they hoisted the woman high, celebrating their heralded saviour giving praise to her name and offering every bit of the reeking fish which had been left out on the tables. Every year since they celebrate A'kaia's glorious victory over the bandit camp, the story grows grander with each subsequent telling. A improvised statue of the Miqo built in her honor now rests in the center of the plaza, so that they could show anyone who visited the beautiful sight of their most divine saviour.

On the dawn of their second visit the crew was sent to investigate strange happenings which had begun taking place on the island. Upon reaching the docks the crew were greeted by a number of musclebound Roegadyn dressed in adorably cute cat ears. Raising the question they explained that a ritual would soon be happening in honor of the isles savior A'kaia. After some light investigation the Miqo'te of the island were found contained within a storage shed. Thinking on what they had gathered so far, it quickly became apparent that the villagers were to be used in the summoning of a primal. Before the ritual could be stopped the primal of A'kaia manifested before them. Due to the gentle and good nature of the woman the summoned deity would not put up any resistance as the crew went in to attack. With a mix of martial attacks and air support from the Rocinanate, the crew was able to defeat the primal before anyone fell prey to the dreaded tempering. The Roegadyn were rounded up and the Miqo'te were liberated to once more praise their saviour. Cor'sair Boon reported in the after action report.

Briefing and Report: Return to Panshaw

Surrounding the settlement is wooden barricade. Years of neglect have taken a toll on the defensive line and there is heavy rot and gaps in the wall allowing for easy access.

Panshaw's main source of income comes from selling pearls and fish to mainland Thanalan. Most of the inhabitants work aboard fishing vessels, forage in the wild for food, or craft sub par pottery and tools.

Panshaw has relatively little infrastructure. There is a small mismanaged market bizarre in the center of the city. Docks are kept by the shoreline for fishing vessels. A few storage sheds house a variety of tools, foods, and supplies.

Fish, Pearls, Blackroot Rose, Ruins to the south, Statue of the Beloved A'kaia 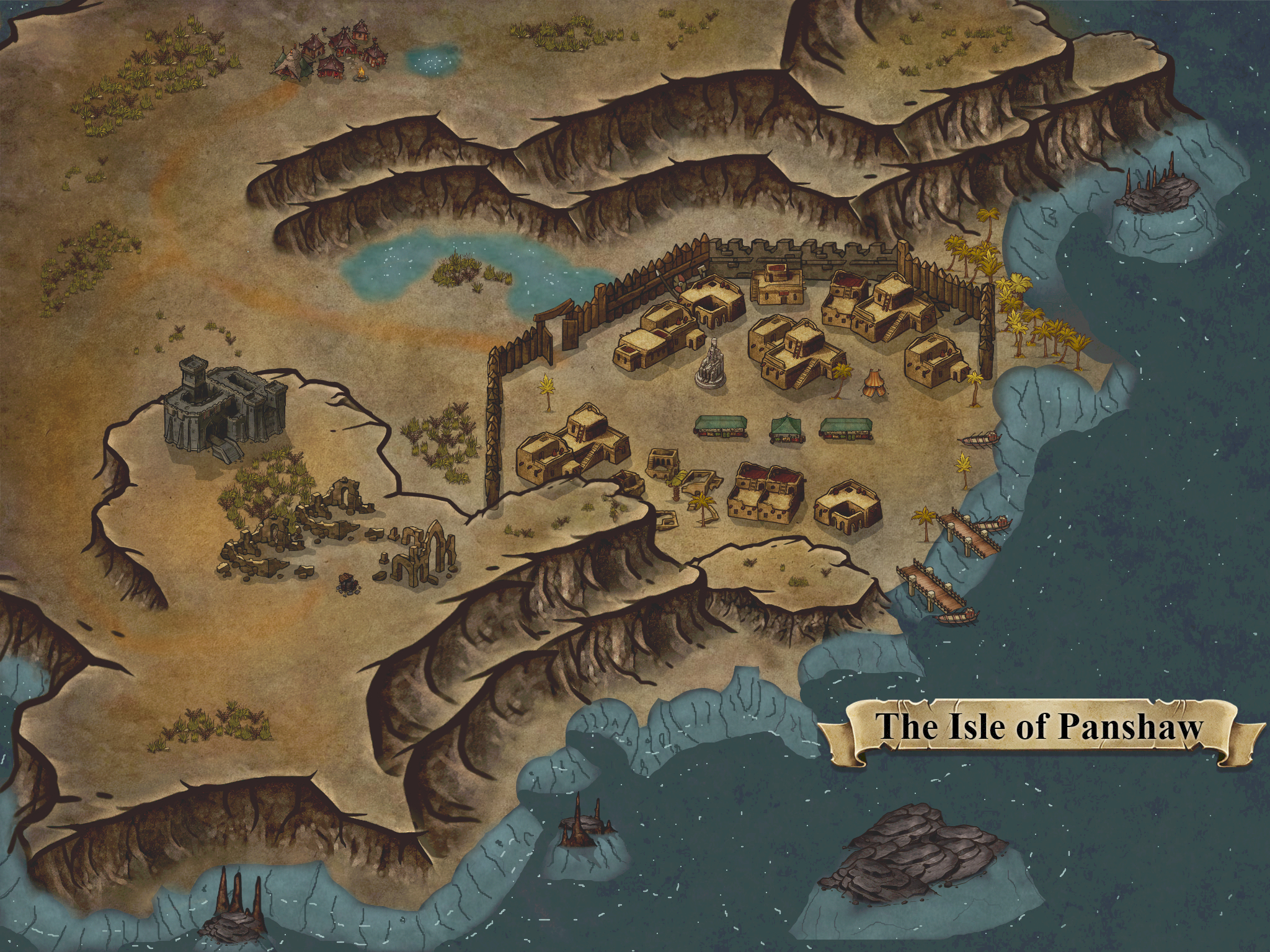 Alternative Name(s)
The Island of Lost Miqos, The Island of Crazy Miqos
Type
Village
Population
Around One to Two Hundred