The bards of Bennoria have many tales to tell, but one that is a recent favorite are the adventures of Restless Nori and how she alone braved the interior of The Fells to discover it's mysteries. They tell how she set out from Crossing's Rest and spent the next three months wandering The Fells, avoiding the many dangers, exploring the ruins, and dodging monsters. Then at last, on the 46th of Windswept of the 120th year of the Age of Silence, she found them. Coming at least to the Rossheim Peaks she encountered a Fellfolk Stalker hunting party. It was a tense meeting but they took her back to New Moram, home to the last survivors of Maezes. They treated her with honor for not even they had ventured so far into The Fells. She stayed with them for months, learning their methods of survival and all she could from them. Then she guided a small group of Fellfolk back through the Fells to Crossing's rest. With the fellfolk aboard, they were able to guide the sailors to the river outlet that lead to New Moram. Thus, after a 120 years, trade routes were once more established with Maezes.

Nori is a very physically fit half-orc who spends almost all of her time outdoors and wandering all of Bennoria. While she is strong she focuses more on endurance and agility as this helps her explore the most difficult of terrain easier.

Where ever Nori is she somehow manages to be conspicuous. It's not her size, for she's rather average, but more that her styles seem so different from wherever she happens to be. Her clothing is travel worn and frequently patched. She has a sturdy, well worn travel pack full of all her worldly goods, which isn't much. One would expect it to be almost overstuffed, but hers is almost comical in it's lack of gear. Most 'adventurers' carry three times as much gear as she does.
Her features are rugged and she has a scar over her left eye that bisects her eyebrow.
Nori carries around a double ended staff with a mace on one end and a weighted pommel on the bottom. She uses this as a walking device, a weapon, and a camping tool. She carries a machete around as well as a coil of rope hooked on her backpack. She doesn't wear much armor, though her coat has some metal plates around the bottom. Much more and it would hinder more than help.

Nori was born to the Glorgul clan in 78th year of the Age of Silence. The Glorgul are a nomadic clan that heard horses on the plains of Inai.  Even from an early age she seemed to be a fearless explorer, often worrying her parents when they wouldn't be able to find her for hours. She would then turn up covered in grime with tales of her adventures exploring around their tribe's current location. Once she completed her rite of passage during her 14th Suncrest she said goodbye to her clan and headed out into the world to explore as much of it as she could.

Her first goal was to explore all of Inai. Nori was the first to find the passage through the XX mountains to reach the XX jungle. It may be a small path fraught with danger but until then no one believed there was any way through those mountains. By the time she was 40 years old Nori had explored most of Bennoria and turned her eye on the only place she had left... The Fells.

While with her Clan, Nori learned to read, write and how to do basic arithmetic. She also learned the ways of the nomadic tribes: how to ride, how to find good grazing lands, proper ways to care for horses, and things of the like.

More often than not Nori will go unemployed and simply live in the wilds. However, she has learned the art of creating maps and will sell her maps in the larger towns. On occasion she will hire herself out as a guide, though usually this is simply as a way to get to a new area. There have been times when someone seeks her out to hire her specifically to go on expidtions.

On the 46th day of Windswept in the 120th year of the Age of Silence Nori came around the south side of the Rossheim Peaks and discovered New Moram, the city that the Fellfolk had built. Until now, it was not widespread knowledge that there were any survivors on Maezes.

Nori has been driven from a young age to go explore every nook and cranny of the world around her. Her passion is finding things that no one has seen or at least no one alive. She doesn't mind sharing her finds with other, or even having people with her as she explores.

Nori pays homage to all the gods, but her favorite is Lyen, Goddess of Chance. Every time she stumbles upon a tucked away waterfall, hidden grove, or beautiful cavern she thanks Lyen for letting her chance upon it.

Her solitary nature has made Nori inexperienced with most social situations. She has a brisk no-nonsense attitude which makes some to think she is rude. 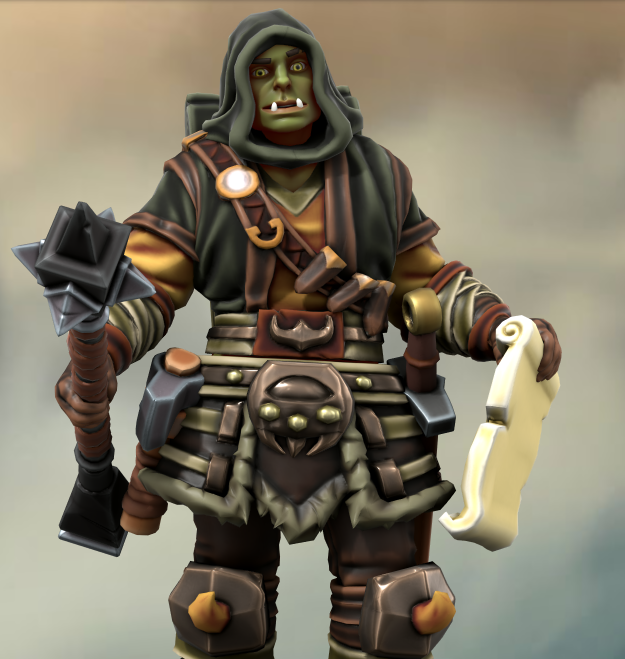 I love that she managed to help set up trade routes. She sounds like a really interesting character who would have a lot of stories to tell!

With any luck the adventuring parties might run into her during their adventures!

She sounds fascinating! I'd love to sit around a campfire with her and listen to her stories.   (Just so you know, there's an incomplete tag for Maezes in that first section ;) )