Her glaive swirling around her, Lae'kyrie dashed towards the aboleth, suprising it with her quickness. The blade wove a tapestry of death as it slashed and parried, striking down the aboleths minions with precision.
At first glance, Lae'kyrie, a human female, may not appear dangerous. Her small frame belies the years she has spent honing her fighting skills at prestigious schools or with mercenary companies. Always at the forefront of the battle, she relishes opportunites to 'dance' with her opponents and surprise them with with repertoire of manuevers.   Having seen comrades fall in battle many times, she belives in living life to the fullest as you never know what tomorrow will bring. This sometimes leads to her placing herself in dangerous situations.

Although proficient with many weapons, reach weapons, and in particular, the glaive, are Lae'kyrie's preferred option. She has honed her skills over many years, and is adept at controlling the battlefield and dealing heavy damage to multiple targets, usually before they can get close enough for their own strike. She is a firm believer in the tenet 'the best defense is a good offense' and prefers to leap into the action, glaive twirling.

The Lord of Jackals

Lae'kyrie recently acquired this title by slaying the previous possessor, who had been imprisioned by an aboleth and kept in an emaciated state. While she feels the actions of the aboleth to require the death of the hapless victim to gain combat ability was deceptive given the bargain was for trade, she nonetheless ran the the hapless victim through, freeing him from a life of misery and causing the magical jackal tattoo, and it's inherent powers, to transfer to her.
Lae'kyrie was taken-aback when the tattooed prisoner was dragged forward and his life offerred as the means for the bargained for abilities. With the bargain struck for payment of gold and magic items, this seemed like a calculated ploy to test her resolve. What could one really expect when dealing with an ancient evil being though, and besides, this beast may soon be on the end of a surprise of it's own. Lae'kyrie felt pity for this poor soul. Who knows how long he has been suffering? This world was a cruel place after all though, and mercy is for the weak. Better for this poor man to die on the end of a warrior's blade, than suffer eternity at the whim of this... thing.   In the back of Lae'kyrie's mind was the ever-present spectre of her mysterious past. Would tomorrow be the day the unknown phantom came for her? Has she honed her skills enough? She drove the blade into the prisoner. She hoped it was a fleeting look of gratitude she saw in his eyes before the glassy look of death took them.   Almost immediately, a quickening overtook her body and a pulse of energy entered her mind. Flashes of sprinting through plains and woods at high speed filled her minds eye. A pack of shadowy forms ran with her as she stalked her prey. Bright flashes of light intensified as she brought it down, and as she sunk her pointed teeth into the flesh, the light reached a blinding apex of white. The howling of jackals boomed in her head.   With a rush, she returned to reality, panting. The prisoner lay dead, and his tattoos now tranferred to her. Lae'kyrie could feel rather than see the tattoo's crawl up her own skin to settle around her torso and shoulders. She felt, faster. Ready to pounce. It was exhilirating, and she ached to bring down prey.   Her captain gave the signal...

An academy known across the planes, the Astragygax Academy is a prestigious military training school. Accepting students from a young age, pupils live at the site for the majority of the year, training in many forms of combat, tactics, and leadership, as well as reading, writing and arithmetic.   Astragygax also has a mercenary arm, the Astragygax Legion, which itself is comprised of a number of companies, specialising in different military styles. One such company, The Blades of Karthanos provide specialist services of a nature similar to a traditional adventuring party. They may accept missions to retrieve valuable items from hostile forces are creatures, rescue kidnapped people, or elimate high-value targets.

Och aye, Lae'kyrie. Trained her I have since she arrived to us as a wee bairn. Scared and lost she was at first. In tears everyday, probably for years. She was but a wee lass, and slight. 'Tis a rough place here, and bullies love to pick on the smallest. Well it took a while, but she realised that being the best meant she could could teach those bullies a lesson. Extra trainin' she did when she thought I dinnae ken, and good she got. Ha, Master Hickman, the medic, had to straighten many a nose on account o' students who thought they could rough her up or got a bit grabby. One time... well, I'll let her tell you what happened to him. Nearly expelled she was.   I asked her once, when she was in her teens, why it was she trained so. Told me she had to be ready, but couldna tell me for what.
— Weapon Master Ameson, Astragygax Academy

Lae'kyrie is a warrior trained since youth. Her body is strong and lean, and she moves with the grace of a dancer.
Lae'kyrie's unusual orange irises fixed onto her adversary in a penetrating gaze as she side-stepped slowly, her stave lowered in preparation. Her white hair, cropped at the shoulders, hung damp with sweat. This had been an arduous training session, but she could expect no reprieve from her sparring partner. Muscles rippled beneath her tanned skin as her opponet lunged forward suddenly. Lae'kyrie shifted quickly to deflect the blow with her stave, then spun low and swept her opponents feet with her leg. With a satisfying grunt, he landed in the sand, sending dust into the air. Lae'kyrie stood over her downed opponent and offered her hand, her jackal tattoos seeming to snear down in contempt as they peaked out around her leather training outfit.

While Lak'kyrie's white hair is not so unusual of itself, when paired with her orange irises, she does possess a somewhat exotic look. While born and raised as human (and not in possession of any non-human traits), this unusual colouring and her unknown parentage does hint at some otherworldly origin. Indeed, many have questioned her about it, but these questions are quickly dismissed in her usual terse manner.   Lae'kyrie also possesses two large tattoos. Most recently acquired is the magical 'Lord of Jackals', which covers her upper torso and shoulders. The finely detailed work appears almost like stylized fur, but also includes jackal faces with various looks ranging from placid to sneering contempt. Although they never move when inspected, it does seem the jackal expressions change subtly to reflect the mood of their possessor.   A finely detailed magical tattoo of wings adorns Lae'kyrie's back and as you might guess, these can be activated to become functional.

As she leads a milliraistic lifestyle, Lae'kyrie rarely has the time or inclination to 'dress up'. She is usually to be found in practicle attire such as trousers and shirt, or in training gear of leather. Even at these times, a sword is usually buckleded at her hip.   For battle, Lae'kyrie favours heavy armor such as plate. Even with this armor, she is agile on the battlefield.   Lae'kyrie rarely adorns herself with ornaments unless they are of a magical nature that can provide a clear benefit, such as the black gem pendant that keeps her safe from poison, or the slim silver circlet that can allow her to understand the spoken language of another being.

The circumstances of her birth remain a mystery to Lae'kyrie. She remembers almost nothing of her life before she was left at the Astragygax Academy, at age 3, by an unknown woman. Feelings of fear and sadness are the primary emotions of this time, and she has but a vague memory of a face she feels more than knows was her mother.   As a foundling, her care was a shared responsibility amongst the masters and pupils of the Academy, and while close to many, she never had a single parental figure to guide her as she grew.   At age ten, her masters deemed her mature enough to learn more of her arrival at the academy as a babe. A hooded woman had brought her, with a sackful of gold to cover her care and tuition. This woman was not her mother but had been sent by her to ensure Lae'kyrie's safety. Apparently, Lae'kyrie's location had to be kept secret even from her mother lest she fall into the possession of some unpleasant being.

Lae'kyrie received her entire education within the Academy. The military-like environment of the Academy has provided a regimented lifestyle, something that Lae'kyrie maintains. While at the Academy, her day began before sunrise, mucking animal stalls, mending equipment and preparing food, then moving on to physical education, arithmetic, and reading and writing.   The Academy was a sprawling town in it's own right and with so much maintenance and building required, classes in the common trades were also offered. Lae'kyrie become proficent in capentry during her time there.

Following her graduation from the Astragygax Academy, Lae'kyrie joined the Astragygax Legion, the mercenary wing of the Astragygax Academy. As a member of the The Blades of Karthanos company, she rose to the rank of lieutenant, and completed a number of successful missions.   Despite a successful career in the Legion, there were minimal chances to pursue advanced training, or to attempt to discover her origins. Therefore, she has taken a leave of absence from the Legion and struck out as an adventurer. Currently, she is a member of the Loose Cannon crew.

Accepted into the Blades of Karthanos

Lae'kyrie is pragmatic and a believer of 'survival of the fittest'. Although not evil, and not intesreted in power over others, she will at times take measures some would consider morally questionable, particularly if it will lead to the advancement of her goal.

The key driving force for Lae'kyrie currently is to discover her origin, and as part of this, to be prepared to face whatever it is that caused her mother to give her up. This motivates her to seek out advanced fighting techniques, powerful magic items or other magic that may aid in her quest. Although keen to find her origin, Lae'kyrie still holds a fear that she is not ready to face the mysterious pursuer, or that she may find out that she was not wanted at all.   With effectively nothing to go on in the search for her mother, Lae'kyrie has chosen a life of travel as a means to perhaps come across some clue, be it other humans with similar features (she has not encountered any yet), or hints of a being that has fathered or pursues children.   While clearly needing to survive during this search, a life of mercenary work and adventuring seems the best way. This desire to not be tied down also leads her to shun affection from others that may distract her from her goal. 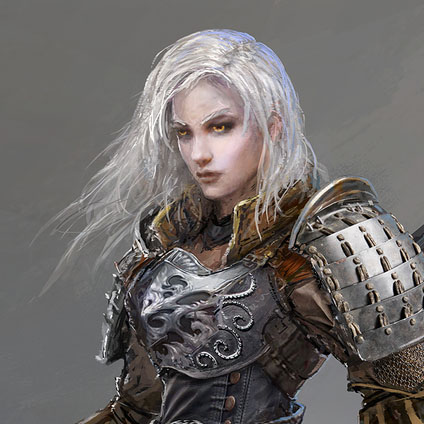