Robes of a Council Second

Most identifiers in Tholaren Dome are the Actia and particularly the Insignia. Each person has their own, after all, and each insignia is a unique artifact representing a thousand years of authority.   A Second's robe is thus a fairly unique thing, marking the wearer as someone who has earned a high position. Originally the uniform consisted of just the robe, worn over whatever clothes the person chose. It has since evolved into a highly specific set of clothing that remains consistent whether the person serves under the Zarichler or the Darad Chanostrate or any of the others.

With some small variation due to dyes and slight style changes due to differing body types, the basic robe began as a simple outer garment, loose, worn open at the front, colored with orange dye. The orange color is because it is more difficult to procure, and thus not something that just anyone would wear.   Eventually, the robe became a full outfit. Typically the bottom layer is the usual form-fitting bodysuit, but this is not a requirement. The first layer of the robes is a very dark blue knee-length sleeveless tunic. Over that goes a vibrant lime green wrap jacket that falls at about high waist, with long loose sleeves. The person's actium is usually displayed prominently on this jacket on the upper chest. Over this goes the same robe as the original. The usual style of this robe is a burnt orange color, ankle length, with flowing sleeves that fall about a hand-width shorter than the jacket sleeves. The robe falls open in the front, so the individual can display their actium or any other symbols of prestige.

The bodysuit underneath is a commonality for everyone who lives in the Dome, as a source of protection in case of disaster.   Another reason, if you're curious.
It's also a holdover from when they were all on the Fergana and needed an undersuit for safe space travel. Which is not something the characters know, so hence why this is hidden as a spoiler, and in the future I may even take it out altogether.
The sleeveless tunic started as more of a smock, something like a doctor's lab coat that could be thrown over top to protect clothing and to designate authority in emergency situations. It was meant to fit loosely, to go over an existing outfit, and was lightweight enough not to be oppressive in warmer spaces. Now it's the base layer for a separate outfit. The dark blue color came about because the dye was made from a type of soil that was readily available to color clothing. The knee-length hem came about as a sign of overall prosperity, that they were all doing well enough to expend extra fabric on a simple uniform piece.   The green jacket came as a way of highlighting the person's actium, and the brighter color came as the role of Second included less hands-on labor and more of a managerial role.   The orange robe came before the jacket, as an overlay to make the wearer stand out. Cool colors are easily made on Thaiterra, with most things not made of storm and fire being naturally green or blue or purple. Brown is another color that is readily available. Warm colors are uncommon, and of those that can be found, it is usually easier to make the brightest variations. The more subdued orange color is highly unusual, and marks the people who wear it as special. While other garments can be made in this color, custom dictates that these are the only kind of robe or coat made to this hue. The style of the robe, with medium sleeves and stretching down to ankle length, requires a great deal of it.   It is this robe that allows Seconds to set themselves apart from others. Perhaps an Insignia holder has the weight of society on their shoulders, a thousand years of history and tradition giving them merit. A Second has power unique to themselves, something that they have earned, through ability and skill or through the manipulation of politics.

Customs Around the Robes

Damn smug Tower Bright. So arrogant she almost made me think less of myself just for breathing. But she got the job done when the Council was too busy dealing with a Cusp emergency to think of the likes of me. And with those robes of hers, everyone knew I wasn't to be trifled with.
— Haliber Yenten, stating a commonly held opinion

The robes, and the role they represent, are not a part of the Fergana Charter, but they are no less an integral part of history. With that history comes the traditions of power that usually attach to such roles.   In order to wear the robes, the person in question must be appointed by one of the members of the Insignia Council. Most of them have various underlings, people who report to them, assistants, and so on and so forth. The position of Second is, in essence, a substitute for that insignia holder. Only these people, as assigned delegates of authority, are supposed to wear the robes.   Since they lack the powers that a signator possesses, a lot of their authority and the things they command is conveyed by the robes. With that authority comes power, homes closer to where their respective signator lives, better seating at events so that if something happens they are prepared to take charge. Most people will defer to the Second wearing their robes, operating under the assumption that if they are in uniform, that they will need to move quickly to accomplish their task. While they have no official authority over the Rolmguard (outside of those Seconds working for the Paladian Rolmguard) their words are often heeded anyway.   In some ways, the robes grant more authority than an insignium. They are such a visible part of the government that it is easy for those who spot them to assume that something grand is happening when they're in use.   The only reason someone should wear the robes is when on official Council Second business. Retirement, or any other form of being removed from the position, means that the person is no longer eligible to wear the robes. Most of those who retire and pass on the position due to age will keep the robes as a keepsake, particularly in modern times when they are carefully tailored to the person. They are removed from those who lose the position by any other means.

Council Seconds are an important part of the Tholaren Dome leadership, and it is important to be able to distinguish these people from those around them. Since their Actia are their own, and not connected to a particular position, it is therefore customary for a Second to wear a particular set of robes. They are an important mark of authority. 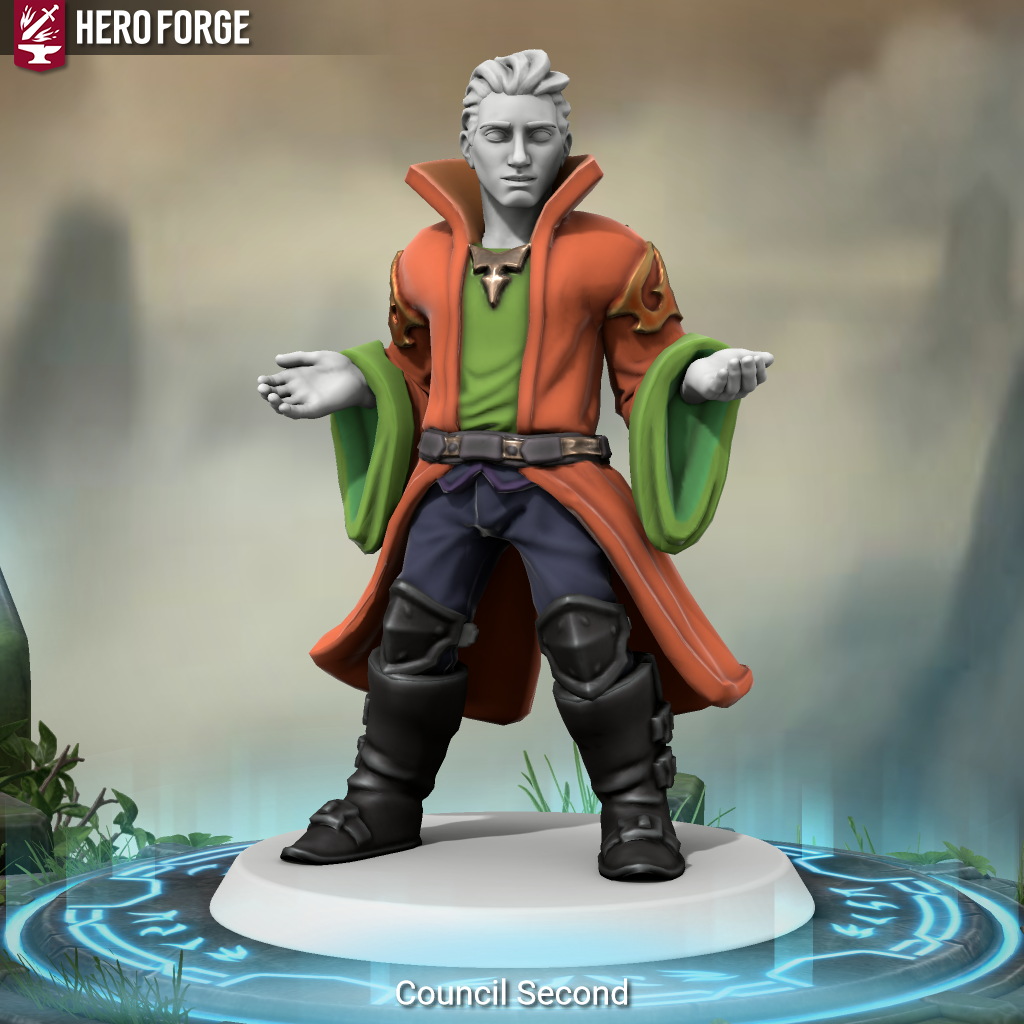 by Lady Grayish
An approximate representation of the robes, created by Lady Grayish on HeroForge
Item type
Clothing / Accessory
Rarity
Seconds are appointed by each individual council member, and no one has ever appointed more than four, so there are anywhere from 15-60 at a time, with the corresponding number of robes available.

Nice article! I like the choice of orange, as it's not often a colour that is chosen as the "special one" in a world.   I'm wondering if the first layer (the blue tunic) is visible at all beneath the jacket and the orange robes? Same for the jacket, apart from the bottom of the sleeves showing. Where is the insignia shown on the jacket?   Is there sumptuary laws to prevent anyone else wearing orange, or is it only if it's in the form of robes?

Thanks for reading! The tunic is long enough that it should be visible under the jacket, and the robe is open so the other two pieces should be visible. The insignia is kept on the upper chest, usually. No official rules about no orange, it's just a nice fancy color for these people. I hadn't thought about it, but it would be used for other things, just probably not other robes.

Nice read! I like the customs you created about the robes. I wonder how orange became the rarest color, any specific reason why this is?

Thanks for reading! I visualized the world as having a lot of greens and blues and purples naturally, in the geology and in the flora and fauna. So it made sense to me that warmer colors would be a lot more difficult to make.

That is indeed a nice approach to it. If it does not occur on the nature of that planet it would be hard to get indeed. :)

Very nice article! I really like the balance between information on the culture as well as information on the clothing. If you need an image to help show off, I recommend Heroforge. I used it for mine and it. works. wonders! Overall, my favorite part of the article was customs. I personally love when a uniform shares the cultural importance to it. Well done!

Thanks for reading, and thanks for the suggestion! I've used Heroforge before but I keep forgetting what a resource it is.

Cool article! I can tell there is a lot of interesting lore behind this, and even without knowing all of the terms I was able to understand the weight of the outfit and how important it is.   That being said, I think it could benefit from some small explanations of some of the terms used in the article. This could make it more digestible for people reading it. Just a small sentence explaining exactly what those are, or even tooltips, could work wonders.   Even without that, though, the article is great! The Significance section at the end ties it up very nicely.

Come and take a look around my world, Totania!   Or check out my Summer Camp Pledge!

Thanks for reading! I've so steeped my brain in this world that I keep forgetting that these terms have mostly just been in my head. I'll definitely put making tooltips on my to-do list.