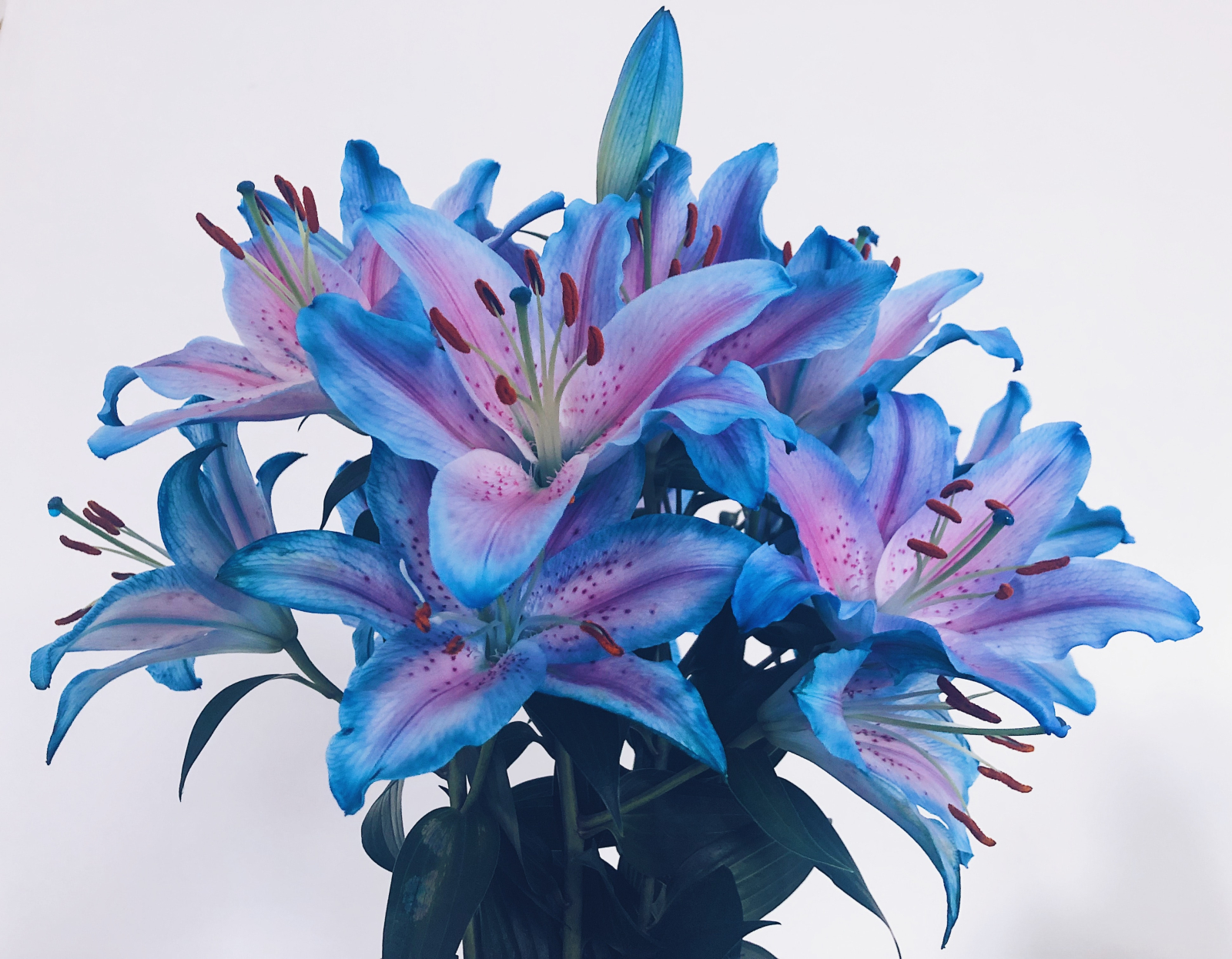 The warrior lay on the ground, surrounded by breathtaking chill, perfectly preserved, entombed in beauty.
— From a Weinadi fairy tale, translated.

You need to have another conversation with your son. He's been at the lily sap again.
— A note from an exasperated Garruw mother to her spouse

The Frozen Lilies of the Garruw are one of the most beautiful and strange plants of Thaiterra. It can be found all over the planet, but it grows in particular proliferation in the Agarruta Drei. Without it, the refrigeration technologies of the Garruw and the Weinadi would be significantly reduced.   Since the lilies grow at the boundary between the spaces claimed by the Garruw and Weinadi, they feature in both cultures, but for different reasons (as indicated by the above quotes). The term Frozen Lilies is the human translation of the name.

The Weinadi words for it in the area are sazhen zaore, which roughly translates as "ice lily". The reason for the name is obvious, due to the appearance and icy traits of the flower.   Within the Weinadi, particularly the Dheizei who roam the surface, the flowers are usually associated with boundaries, and with great risk and greater reward. The flowers grow with Amdzha crystal, which is most typically found at the bases of mountains, which are the tradition home of the Garruw, who used to eat the Weinadi. Gathering the flowers could be crucial to survival, allowing the tribes to refrigerate their food, but it was incredibly dangerous. Even now in the wake of the Asayo-Djemndarra Accords, it's still a risky practice.   In mythology, the quest for the flowers is a repeated motif. And in art, when the flower appears, it can symbolize challenge and difficulty. For example, in classical art pieces, if someone is portrayed holding a Frozen Lily, it can be taken to mean that this person had recently undergone some great trial and emerged victorious.

The Garruw call it terzhid eyoze, a phrase which used to literally mean "cold drug flower." This is because they valued the flower more for its medicinal qualities. They could use it as a sedative or a numbing agent, and it was used to treat fevers in small doses.   However, the main use came from when the lily sap was distilled into an intoxicant substance, typically rubbed on the skin or smelled. The substance is popular with younger Garruw, as the effects can make flying in a storm a rather spectacular experience (which is significant considering the state of most storms on Thaiterra).

The Frozen Lilies are blue, in varying hues that tend to blend well with the shades of rocks around them. The blooms usually develop a glow in a warmer color as they grow, depending on the type of crystal feeding them. Each typical flower will have six smooth petals. The stems are 2-3cm thick, and have a fuzzy exterior that is thought to deter herbivores for its unpleasant taste.

The plant produces a thick pollen that is usually carried by the storm winds. After the seeds are created, it sprouts a tiny purple-gray fruit that most animals find very appealing. They eat it, carrying the seeds around. The seed will not germinate unless it is next to amdzha crystal, but it will usually remain dormant for a long time, until it reaches the crystal.   If one has access to active amdzha crystals, it is possible to cultivate and grow them, but the frigid effect is not as strong as those grown and harvested in the wild.

In order to grow as a Frozen Lily and not as another variety of plant, the lily must grow near Amdzha Crystal. The energies of the crystal infuse the plant with whatever is needed to allow it to grow with the properties it possesses. For more mundane requirements, it grows quite well in rocky soil with average access to water.   If not exposed to sufficient crystal, the lilies will grow rotten and foul, a noxious, poisonous substance.

When properly distilled, it can be used by the Garruw as a powerful sedative and numbing agent, and in smaller doses is used to treat fevers. If improperly distilled, it's a drug with mild hallucinogenic qualities. Young Garruw tend to use it as a mild intoxicant.   The Weinadi used the sap for early refrigeration technology, and to preserve corpses. Gathering it in modern day is used as a rite of passage for warriors, since it grows so close to the Garruw.

Found at the base of mountains where there is sufficient Amdzha Crystal to allow for growth. Also found at the rim of caverns, again with sufficient crystal growth. Particularly common in the Agaridian Plains area. This lends itself to an unusual symbolic role in the cultures of the Garruw and the Weinadi both, as it expressly grows in an area that is the border between their two traditional spaces, the mountains and the valleys.
Conservation Status
Common, easily grown in the right conditions
Average Height
1 meter when fully grown, not including root system

Remove these ads. Join the Worldbuilders Guild
Flora and fauna

I think you got some nice concept here with the plant only growing thanks to nearby crystals. The tooltips are also handy to learn a bit more about everything related to the plant. Without the tooltip I would not understand where the energy of the crystal comes from so perhaps you could add it here as an extra sentence so people don't need to look it up on a first read.   I would expand the summary on the top a bit to tell more about it's properties and where it grows because in the first paragraph the reader does not yet know about the crystals. It's also possible to switch the traits and dietery sections. The first sentences in the dietery section seem a bit strange still so perhaps they need a bit of rework.   You mention that the flower is also important culture wise for both the Garruw and the Weinadi. It would perhaps be interesting to see an extra section for each to see what culture they have in relation with the flower.   In all a nice concept that would be even better with some additions ! :)

Hello! Congratulation for this submission. It is interesting, and a nice take to have the plant necessarily grow near those crystals instead or requiring sunlight.   How does that plant reproduce? And how do the seed disperse after dispersion? Also, can the plant live underground?   As a suggrestion, you may want to increase a tiny bit the amount of text, and perhaps to make more complete sentences regarding the geographic distribution of the plant. I'd also suggest you to add a tiniy bit of "flavour" to the text, perhaps by adding a quote, or a bit of prose?

Cool idea! And it's a lovely picture you have for the header.   I'm wondering a few things you might want to expand on:   Where did the flower get its name? Is it just because it's blue and reminds people of ice?   Has anyone tried to cultivate the flower or does it just grow in the wild?   And how do the crystal help with the growth? Would just putting a piece of crystal next to it work or is it only where natural crustal ae found in the rock?

This is so creative! I love how you've taken the concept of being frozen and taken it beyond just ice and preservation and into the realm of using it as a sedative and a drug, as well as its cultural significance to both the Garruw and the Weinadi. The differences in use between the two cultures is also interesting, and I wonder if that could present as a (possibly entertaining) point of dispute between the two cultures.