Dyr Tolen is the name for both the southeastern-most nation of the Sword Pact, and its grand capital city. Known as the City of Alchemistry, the city of Dyr Tolen is a place of marvels rivalled only by Lothelir in Ehr Nuvale. It is the epicenter of the rapidly developing, semi-magical study of alchemistry, which has brought miracle cures, technological marvels and deadly new substances into Tevastra. Dyr Tolen is also "the harbour of the Sword Pact", being the closest Pact nation to Blessmark Isle and thus a common port of call for trading vessels. Along its vast array of docks, goods from all over the world are loaded and unloaded, and the coin never stops flowing.   Dyr Tolen has a longstanding rivalry with the dominion of Ehr Nuvale to its north, and the city of Dyr Tolen and Ehr Nuvale's capital of Lothelir compete fiercely for the title of 'grandest city in the Sword Pact'. The increasing influence of the alchemists in Dyr Tolen has only made matters worse, as Lothelir is the magical centre of human civilization, and arcane practitioners generally see alchemy as a dangerous pseudoscience.

Dyr Tolen is ruled by an oligarchic council of wealthy and influential citizens, led by a Master appointed from within their ranks. The Dockmaster Council, as it is called by tradition, is currently made up of two factions - the merchants and the alchemists. The current Master, Garic Thershaw, is an alchemist, marking the first time in many decades that the merchants have not controlled the Council. Under Master Thershaw's leadership, Dyr Tolen has implemented a number of alchemical marvels which have endeared the city's population to him, including lamps in the street which can burn for weeks, and an alcohol-smelling substance that can stop wounds from going septic.   There are other small settlements around the city of Dyr Tolen which are largely independent, although they rely heavily on visits to the city to purchase important goods. Some of these villages are actually halfling colonies, made up of those from the Blessmark Isle who do enough business in Dyr Tolen that it just made sense to move, or they simply wanted a change of scenery. Indeed, the second largest population of halflings can be found in Dyr Tolen, and there are even a few on the Council.   Dyr Tolen is home to the world-famous Academy of Alchemistry, the source of all alchemical knowledge and learning. The Academy exercises considerable influence over the city's politics, and Master Thershaw is known to be very sympathetic to their interests.

The people of Dyr Tolen have a reputation for acting superior to those from other Pact nations due to their technological advances and great wealth. Knowledge is valued, while the importance of "lesser" pursuits like farming or soldiering is ignored. Perhaps thankfully, the permanent citizens of Dyr Tolen make up only about half of the city's population, the rest being comprised of the vast array of traders, mercenaries, emissaries, explorers, artists, scholars and more who come to visit the City of Alchemy. Thus in truth, Dyr Tolen's culture is a mosaic of all cultures that can be found in the civilized world of Tevastra, with humans and halflings bumping elbows with elves, half-orcs and dwarves. The city is so vast that customs change between districts, and there is sure to be somewhere in the city where everyone might feel at home.

Dyr Tolen is mainly focused on its own prosperity and development. They neglect maintaining a standing army, instead relying on advanced defences and mutually beneficial trade agreements with their neighbours. Under Master Thershaw and the Academy, Dyr Tolen has been labouring to exceed the splendour and influence of Lothelir and its mages, and cement alchemistry as the main source of wonder in Tevastra. Dyr Tolen naturally maintains a strong interest in the flow of free trade and endeavours always to maintain good relations with Blessmark Isle. They are open to visitors from the Ilumvir Empire, though the elves' general distaste for alchemistry means that Dyr Tolen does not have a large elf population, despite sharing a border with their empire.

Dyr Tolen's primary asset is, of course, its alchemical wonders, which it exports in limited quantities from its many harbours to places even as distant as the Diamond Expanse. The current ruling Council has made a point of favouring the import of raw materials important for alchemical work, such as gold ore and sulphur. They are also the centre of human shipbuilding, with Walston, Jullandy and Zethunir having all commissioned fleets of ships from Dyr Tolen at various times.

While part of the Empire of Avaros, Dyr Tolen was the empire's primary port. Unlike many other of the Empire's great cities, Dyr Tolen was not absorbed or conquered, but constructed by the Empire itself. This is why Dyr Tolen appears cleaner and more modern than older cities like Vorence in Jullandy and Selvara in Zethunir. It was from Dyr Tolen that the Empire launched its fleet across the Dyronian Sea to make war upon Cobala.   Dyr Tolen is also the birthplace of the merchant class, being the first city where commerce generated enough income that large numbers of people could live as merchants, in turn leading to their increased organization and emergence as a group separate from the lowborn and the nobility. Though a merchant class is no longer unique to Dyr Tolen, there are few other places where commerce is emphasized as strongly in public policy (Blessmark Isle being a notable exception).   When the Empire fell and the neighbouring capital province of Ehr Nuvale quickly descended into anarchy, leaving Lothelir a besieged island of a city, the Dockmaster Council moved with haste to declare Dyr Tolen an independent and neutral city-state. Though various bands of warriors and brigands appeared outside the city walls in the coming decades, none were large enough to actually breach them. As the Empire's dying spasms played out in the surrounding newly formed nations, Dyr Tolen weathered the storm, waiting patiently for peace and trade to return.

The city of Dyr Tolen sits below a high cliff, with its harbour built partially into the warm waters of the Dyronian Sea. The territory around Dyr Tolen is rugged and hilly except near the southern coast, so several groups of farms and small villages are found there.   The nearest town of any significant size to Dyr Tolen is Ebander, situated where the old Imperial Carriageway splits north (towards Ehr Nuvale) and west (towards Zethunir). Accordingly, it features two inns, an oddity for its meagre size. These are called the Footman's Cup and the Farview Inn, and they compete bitterly for the business of passing travelers.   To the northeast, the Emerald Wash flows into the lowlands at the base of the Serpentfangs, forming Lake Lethi. The fishing village of Lethian is built upon its shores, a good source of freshwater trout. Of late, those visiting Dyr Tolen from Lethian to trade claim the lake has become cursed and the people may soon be forced to abandon their village.   The northwest features the foot of the Godsreach Mountains and surrounding Gray Forest. Where the trees begin to thin and give way to hills, the ruins of the town of Magdria can be found. Magdria was once a forestry town, providing timber for shipbuilding in Dyr Tolen. During the Empire's fall, it was burned to the ground. The culprits of this arson may never be known - some theorize bandits, others Zethuniri. Currently, it is an infamous bandit holdout from which they raid travelers on the road to Ehr Nuvale.   Closer to the mountains, deep within the Gray Forest is the frontier village of Unestead. The people there trap furs and hunt deer, their low population allowing them to survive from this along with some foraging. Its remote location means that Unestead gets few visitors - it is a week's travel there from the nearest farm, and two weeks from Dyr Tolen. The rare hunters who visit Dyr Tolen peddling their furs and hides swear up and down that there are orcs living among the smaller mountains of the Godsreach range, and the rotted heads they bring with them give their story the ring of truth.   On a small island off the southern coast is the halfling colony of Yharbury. Founded about a century ago, Yharbury was built to be a home for the families of halfling merchants working in Dyr Tolen. Visitors are allowed, but the halflings insist that no business be done there except the sale of lodgings and food.   In the west, the old Imperial Carriageway carves through the hills on its way to Zethunir. 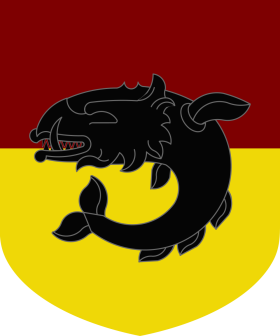 Where the world comes to stare.

I really enjoy this article! The banner works so well to emphasize the harbor/alchemy mess I am sure they often get into. I could almost imagine that it is a rendition of a fish that was rumored to have been created through unreliable alchemy.   Aside from the fish I got caught up on, the territories are very well described. My favorite likely is Unestead. I'm excited for the article on it!

Thank you so much for taking the time to read this article - this is the first time anyone not from my DnD group has found my page I think. Just glancing over Ravare's homepage, it looks like I could learn a lot from your work and I will be browsing it with interest!

I have been here since near the start, so I have had plenty of time to pick up tricks.   Your content is solid enough that you could go pretty far in competitions (If not win a few!). If you ever have questions on how we did something, feel free to ask!