Of all the humanoid species on Tamyrh, the Korlo are the least changed genetically from their ancestors.

Humanoid (images to be uploaded later) 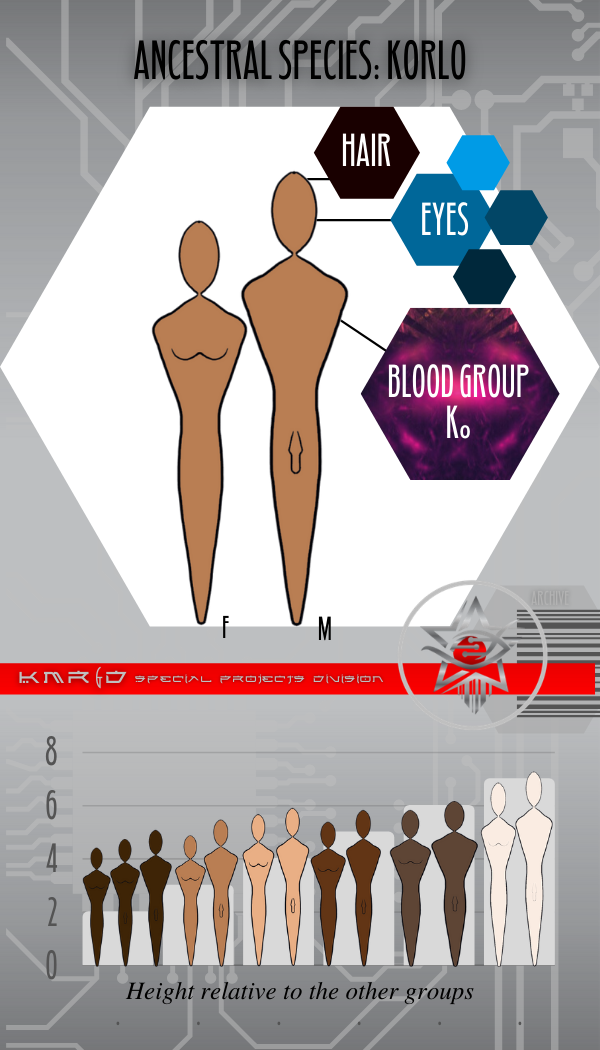 by J. I. Rogers
Because the Korlo have largely kept away from breeding with the other groups, their gene pool is suffering. Diseases like K'Shar Syndrome plague the descendants of oldest of the Ranking Families, forcing them to choose mates from lesser families to avoid compounding the issue.
The Korlo are fond of children and large families were common for centuries. In the last two-hundred years, the Ranking Families have produced fewer children, losing most to miscarriages or fragile health in infancy.

As described in other sections, Korlo society is based on social Rank. Each echelon socializes with their peers, though in recent years the younger set has expanded their network of friends.

Sketches and description to be updated.

There are family names, and then there are "Family Names." "The Korlo are a people who take pride in their heritage and have established an elaborate system of social Rank based on it. From the wealthy to the low-born, every member of their society has a place within the Cluster Cities.

Lesser branches of Ranking Families:
These exist and are composed of distant or disgraced relatives, illegitimate Korlo offspring, a by-blow* that was granted Rank, or were a compromise (like in the case of a socially inappropriate marriage to someone of low or no Rank).

A Point Of Interest...
The status quo was shaken in 2545 when after a lengthy border war with Ankoresh. A small percentage of the Korlo deployed returned with spouses of other ethnicities. This break with tradition drove a wedge between friends and families alike and almost resulted in a civil war. The Council intervened and agreed that the families affected would take a reduction in Rank to pay for this unfortunate turn of events, but would not be censured further. Children of these pairings are referred to as "Exotics," and most are accepted in Korlo society, but opportunities aren't always equal depending on the mix.

Korlo Government & Financial Organizations: The Council and Trade Guild.
Each Cluster City has a Council seat. Up until this century, the position was only available to the Ranking Family in that city. William Harlo Sr., the CEO/Founder of Harlo-Fyre, changed that when he financially deposed the Eno Family and acquired their seat in Thallen Cluster.

Education: While each Cluster has a university, colleges, trade schools, and tech institutes, it's accepted that Merrow Cluster is the seat of advanced education in Korlune. Merrow's industry is higher learning, and their needs are furnished entirely by the other Clusters.

Arts & Culture: Though not an 'organization' Riva Cluster is the oldest of the Cluster Cities and as a result has the largest collection of artwork, theatres, and non-digital libraries in all of Korlune. Funded by both the Doncaster and Isoldrun families, Riva was designed to uplift the Korlo spirit in dark times and keep their vibrant history alive for future generations. Like Merrow Cluster their assets are intellectual, and they are reliant on the other Clusters for food and other essentials.

Historically, marriage was arranged between families to form alliances, gain Rank, or some other mutual advantage. Courtship was secondary and could only begin once the contract had been signed. This getting-to-know-you phase could take the form of chaste exchanges to more intimate encounters, depending upon the individuals. Breach of contract was not an option, so even if the pair didn't connect on an emotional level, they had to put on a brave face and come to some type of arrangement behind the scenes. The engagement could be as short as a month, but it was considered better form to wait for an entire year before completing the rituals. Children conceived in this time are considered to be lucky.

Among the oldest families, marriages are still arranged. They are based on both Rank, and more recently, degrees of generational separation as the families are all interrelated. Third cousins are as close as is permitted as genetic issues such as K'Shar Syndrome are becoming more common among their numbers.

Korlo with low or no Rank can choose for themselves.

To gain Rank requires a formal alliance with an old family, typically via marriage.

Aside from food, shelter, and clothing, being Korlo today means each citizen has access to:
- free education (scholarships available to those who merit them).
- advanced healthcare
- employment

Even those born with low Rank can build a financial empire if they have the will to do so. These rights are guaranteed and paid for by the Ranking Family of the Cluster City in which you reside. It should be noted that Rank does make a difference to your standard of living. If you have low or no Rank (as is the case with those who've been found guilty of serious non-capital crimes), you won't starve, and you won't be homeless. But the food you have access to will be basic, your job will likely be menial (unless you have some sort of recognized talent), and you'll be living with the Diasporan workers somewhere in the extensive underground area that fans out beyond the domes.

How Do The Ranking Families Finance These Perks?:


All prime real estate directly under the dome is owned by the Ranking Family of that Cluster City. Anyone setting up businesses or living in that area leases the property from them, pays them for their annual business license, and export permits. Fines are also paid directly to the Ranking Families as well as ... bribes.

The Korlo have developed advanced surgical techniques and are capable of cloning or 3D printing replacement organs, bones, skin, etc. They do not use donor tissue unless it's from a family member. Although modern Korlo are not devout, a singular precept of the old Faith remains embedded in their subconsciousness.

Accept not the flesh or blood of the others into your form as it will taint your Soul and bar you from Ehmeri** forever.

Although the recounting of history between groups varies, the Korlo maintain that they were the ones that salvaged what was left after the final global conflict, and through careful management of resources and planning, created a nation where Korlo and Diasporan alike could rise from the ashes of the past. These claims are not without foundation.
The early Ranking Families were the ones who organized (and funded) the creation of the Cluster Cities. They were behind the efforts that reclaimed the network of tunnels that linked all the pre-cataclysm sites within Korlune's borders. In the same century, the Korlo were the driving force behind repairing the maglev system, making it possible for non-military groups to travel safely between locations. They designed, constructed, and financed the power stations and engineered the first hydroponic gardens that gave their people universal food security. It was a Korlo inventor that developed the first large-scale water deacidification system and made the technology available to everyone.

Foundation of Korlune and the Council:


* A By-blow is the designation given to any child that results from a non-marital pairing between someone of Korlo heritage and any of the other groups. It carries no stigma. These children are usually the offspring of non-Korlo courtesans, but trysts happen, and some have Korlo mothers. By-blow infants are released to their non-Korlo parent after an NDA is signed (and a financial maintenance schedule is in place - the Korlo parent always pays). There have been cases where the Korlo side of the family will take an interest in the child as they mature, and arranges a meeting or special privileges (access to advanced education in the Clusters, employment, or even public acknowledgment), but these cases are rare. By-blows are usually sterilized by age thirteen, which renders them ineligible for the Diasporan Pairing Protocol. There have been few exceptions.


Origin/Ancestry
Korlo
Lifespan
95 - 110 Years
Average Height
Males: 5 ft 7 in / 1m 73 cm
Females: 5 ft 1 in / 1 m 55 cm
Average Weight
Males: 145 lbs / 65.7 kg
Females: 105 lbs / 47.6 kg
Average Physique
Males: Toned endomorph
Females: Toned endomorph
Body Tint, Colouring and Marking
Markings
Each male has a varying pattern of dark rosettes that start from his shoulders, wrap around to the shoulder-blades and move down the spine. The colors intensify through puberty.
The female's rosettes begin behind their ears and run down the back of their neck and along their spine. The colors intensify through puberty. 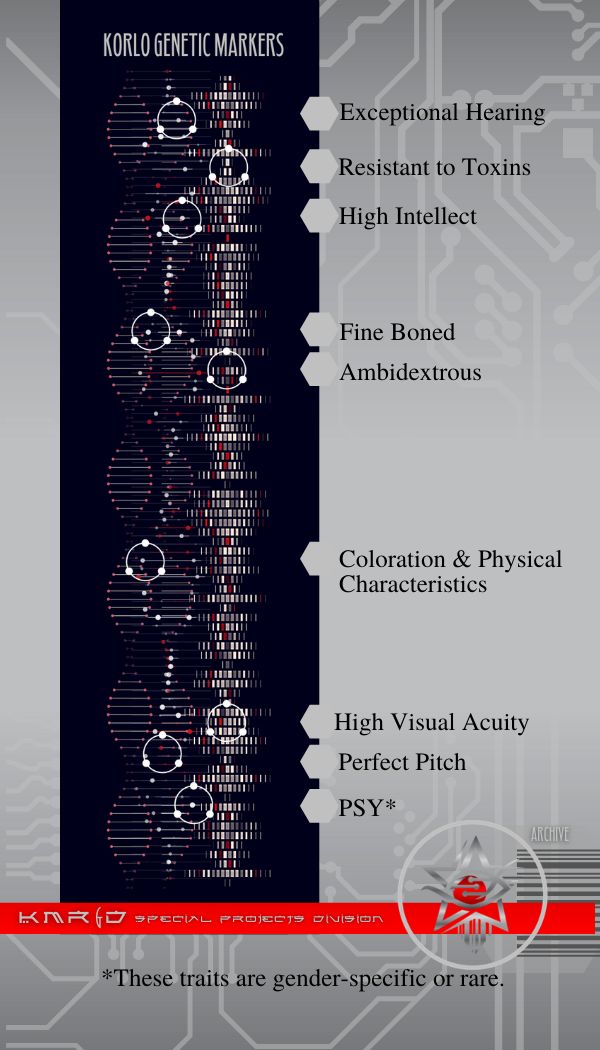 One in a thousand Korlo is born with an innate ability to 'read' others. This sensitivity varies in strength and scope, and ninety percent are on the low end. While all of these individuals can assess someone's emotional state through touch, only the truly gifted can sense deeper, hidden things just by being in proximity. Even the talented have difficulty thoroughly reading someone with strong Birlo or Tyran heritage.
Humanoid
The Ankor*

This article is still taking shape and will be updated accordingly both during and after World Ember.