The story of Eria, (they/them), told in Very Short Story bits.   “Guilty.”   Eira tried their best to hold onto their resolve. It would not be the end of their life, not yet.   “Eira, the Twenty-one Selected have voted and determined that you must seek Renewal.”   The beat of Eira’s heart threatened panic.   Eria stood in the liminal state of choice that all Talithans found guilty did. Their life went from a short infinity of choice to one of just two. They could live under the eye of a Watcher until proven, or they could go with the Purists to their island.   Eria looked up at a large circular window as the Counselor spoke. A cloud had moved, and light gleamed through the tinted solar glass, creating a splash of color on the dark gray floor. A motif that seemed to suggest hope. A sense that Eria could not find.     A contralto voice reached Eria’s ears. “Tell us your choice." Eria’s knees threated collapse, but somehow they maintained their poise. They looked at the two tranquil figures clad in pale green. Purists, ready to take Eris to a new home if they consent.     Eira looked at the audience of observing Talithans. The distrustful looks on their faces confirmed the choice they had already contemplated. “I choose The Pure Dawn Collective,” Eria announced. A Purist with dark curly hair stepped forward. “We accept.”     Eira sat in a chair as their life was arranged for them. Their identity chip was gone. Purists had no electronics. Their possessions deposited in an almost empty bag. The house they lived in given to another. Eria felt like the colorless bag, deflated.     “Everything is ready,” the Watcher said. Eria stood. Their infatuation with knowledge brought them here. They had not learned what they needed. Eria wanted more meaning. They wanted to find that definition on their own, instead it would be given to them.     (underline words indicate challenge words) 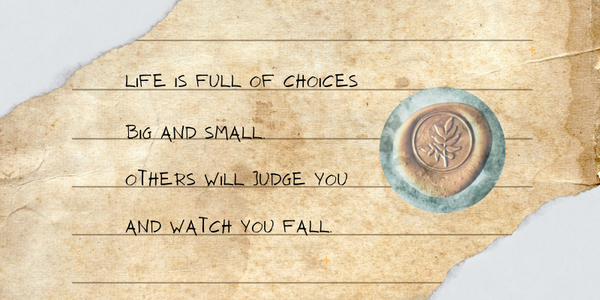