This historic location is inspired by the real life 59th Street Marine Transfer Station in New York City. The Shadow was created by Walter B Gibson and is owned by Conde Nast Publishing. Captain America was created by Joe Simon and Jack Kirby in 1941 and it currently owned by Marvel Comics / Walt Disney Company. All of the use here is inspired by the original as "fan fiction".

The 59th Street Marine Transfer Station in New York? The history of that place... is complicated...
— The Shadow


The 59th Street Marine Transfer Station began life as Pier 99, build in 1901 to receive passenger ships arriving at New York City. It continued this work until 1931 when the location was refurbished by the Works Progress Administration. Once refurbished, the location was used to transfer waste for the New York Sanitation Department while passenger ships used the newly built piers to the south of Pier 99.

During the 1930s saw many historical firsts. This was no exception for the 59th Street Marine Transfer Station. Organized crime was on the rise and with it came the emergence of the costumed "crime fighter".


First a passenger port, then a site to off load paper and other materials for transfer. It was almost destined to become a smuggler's second home.
— The Shadow


Smuggling of all kinds was rampant. Daily, the newspapers reported on night time battles between the Vincetti or MacCabe crime families and a mysterious figure known only as ... The Shadow!

Tensions escalated, with both crime families recruiting more colorful figures such as the Skull Wasp and the nefarious Ghost Cobra. Efforts of both overworked law enforcement, and the crime fighter community, kept crime from spiraling out of control. Slowly, crime was taking a downturn in the area.

This continued, even after the outbreak of the second world war in 1939. Throughout that time, the 59th Street Marine Transfer Station was one of the local hot spots of criminal, and crime fighter, activity.


But the war brought many changes and the 59th Street Station was no exception. During the war, criminal activity decreased as the war heated up. The station's purpose shifted from the transfer of paper and garbage, to valuable materials needed for the war effort.

Along with the shift in purpose came a shift in nefarious activity. Former enemies found themselves on the same side as Axis spies attempted to use the station as a foothold for underhanded plans.

Local heroes such as the Shadow, Green Dragonfly, Gray Llama, Moon Knight, and Captain America found themselves working with the Skull Wasp and even the Vincetti or MacCabe crime families. Their opposition? The vile Baron Blitz and his team of Iron Commandos.


After the war, the station returned to its original use. But this time increased police presence and the long time war against crime on the part of such as the Shadow or the Green Dragonfly paid off. Criminal empires crumbled and the activities of 'super criminals' moved elsewhere.

The station remained largely undisturbed, and not well maintained, until the 1980s. Dilapidated, largely forgotten, the building was slated for destruction.

Yet, true to the building's history, a hero was not far away.

Mierle Laderman Ukeles staged an art installation that brought attention back to the historical landmark. A longing for past days and past deeds saved the old building. Instead of demolition, the City of New York marked the site for reconstruction. 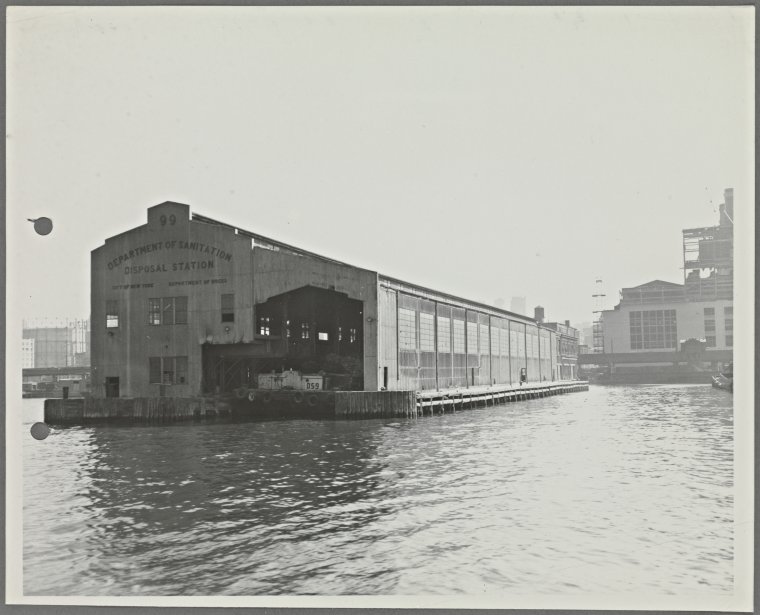 Department of Sanitation at Pier 99, North River in 1951 by Irma and Paul Milstein
Editor's Note
That's not all!
Rumors have long circulated that the criminal element suspected that there was more to the 59th Street Station than met the eye. Stories persist to this very day, that the Shadow maintained a secret base beneath the 59th Street Marine Transfer Station!

Is it true? Is there a secret base hidden below the marine transfer station in the waters of the Hudson River?

If so, only the highest ranking members of the New York Sanitation Department... and the Shadow ... knows!
'Nuff Said! 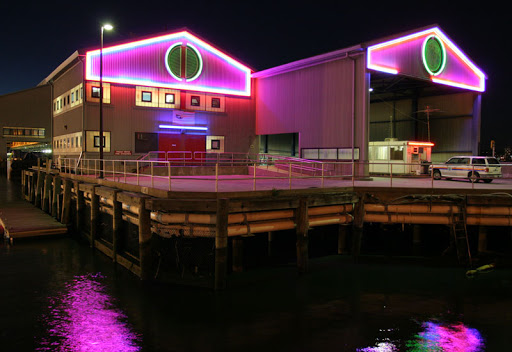 Today the site has been upgraded several times. The most recent was the addition of its trademark neon building trim by artist Stephen Antonakos. Also, the building retains portions of its restored architecture, such as the Greek Revival facade of its original construction.

It has also re-emerged as an occasional hotbed of criminal and hero activity.


Ok, look. I'm not admitting anything here, but I might have been hired to smuggle something through there a time or two. You'd be surprised how well a person can hide in plain sight with all that neon around.
— Puma, thief and mercenary for hire who always winds up in the most questional locations


Today, the station's recylcing transfer activities are interspersed with criminal activity from the likes of Dr Overmind, the Disco Boys and Girls gang, Silk Sphinx, or even what may be associates of the Golden Lotus.

The NY city police work hard to curb this but they do get help from today's hometown heroes such as Knight Thrasher , the team of Mouse Force, and a current day Green Dragonfly.


Believe it or not, most heroes don't actually 'patrol'. The police do that. We just respond to emergencies that got out of hand. But my brothers and I have wound up at the station so much, we overhead some of the sanitation department people talking about installing a 'Mouse Force Signal'... whatever that would be...
— Donata, inventor and member of Mouse Force

Editor's Note
But wait, True Believer! There's more!
Unlike the other criminal element, the Disco Boys and Disco Girls have yet to commit a single crime from, or near, the neon adorned building. In fact, they may be actually protecting it!

Word is that the Disco themed gangs revere the location. As such, they try to protect it as best as they can. At times when the challenge is outside their ability, they "enlist" help from some of the local heroes.

This enlistment, if the stories are true, is to commit fake crimes to attract local vigilantes to deal with the problem. Once the battle is over, the Disco gangs then quietly come rebuild and repair damage to the station to return it to pristine condition.
'Nuff Said!


The stations original purpose was to receive passenger liners arriving to New York City along the Hudson River in 1901. But as times changed, so did the station's purpose.

Since 1901 ownership moved to the Department of Sanitation. The department has maintained the station as a key part of its waste management system for the City of New York. As the city grows, so does the reliance on the station.


The marine transfer station is an eclectic mix where form meets function as it only can in New York City. 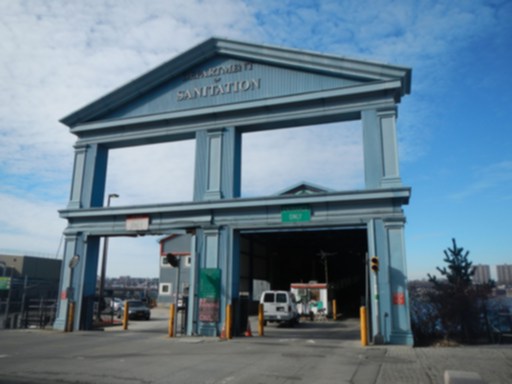 Most of the building looks like a large industrial warehouse. In general, that is what the station is now as it houses paper materials for recycling. However, the warehouse structure contains a reinforced frame, walls and other structural elements. These are due to the building being host to the sporadic 'crime fighting' that transpires which can be destructive at times.

But if approached from 59th street, the view is different.

At the 59th street side, the vehicle clearance structure was contructed in homage to classical Greek architecture. Specifically, an ancient Greek temple. But still, many question if the baby blue color of this recreation of Greek structure clashes with the industrial appearance of the building.

Then, there is the neon.

During the day, this aspect is easy to miss. At night, the station shines in all its multi-colored glory. Reds, purples, yellows and greens glow from the building, running along the station's trimwork and roof. The colorful display of light can be easily seen across the Hudson river and is often used as a landmark by barge captains navigating the river.
New York City

Unless otherwise stated, all artwork and content are © CB Ash and Jarissa Venters, 1993-2021, All Rights Reserved.
Original CSS "Comic" theme comes from Oneriwien but has been adapted/modified and expanded by Kummer Wolfe

Great article! It's nice seeing the history of the 20th century in your world through the "perspective" of a building. I like the idea of people committing fake crime to protect the building :D

Thank you! It was a lot of fun to write.   And once the heroes find out the crimes are fake, they may not like it quite so much at first! But... they'll come around! :D