Circus from the Edge of the World

Welcome welcome, mortals and immortals! Outsiders and beastfolk! Travellers from beyond the land itself! Feast your eyes upon the Circus from the edge of the world! Behold the child born from heaven and hell! Witness the performances of Snow and Ember! See the pride of the fiery beast! We bring wonders from across the realms straight to your front door, for only a small fee.
— Madame Niamh

The Circus from the Edge of the World, also simply referred to as "World's End Circus" is a travelling troupe of various performers moving across Sichelan. Lead by Madame Niamh, she and her group journey the land to entertain and amuse, bringing the wonders of the Cosmic Hourglass to one's city.

Although the circus has been a seemingly booming business spanning for almost 3 whole centuries, its history has been riddled with controversy. Not only for some of the more obvious things like necromancy, but also of conspiracies regarding Madame Niamh.

Considering her Fae nature, many suspect traits of enchantment magic being thrown around, mostly to make audiences pay more without knowing. However, several investigations have led to no evidence of something like that happening. Even the performers themselves seem to do all this willingly under contract.

Yeah, accidents and injures are bound to happen during performances, but we always have safety measures to avoid losing our heads.
— Asuka the Aerialist

Oddly enough, the circus also has had a few major accidents in its lifetime that seemingly are skimmed over as well. Both injuries minor and severe have occurred during the performances, yet no show has ever been delayed as a result.

The performers simply state that Madame Niamh is just really good with magic, which makes even something like dismemberment merely an inconvenience.

There's joy to be found at the end of the world 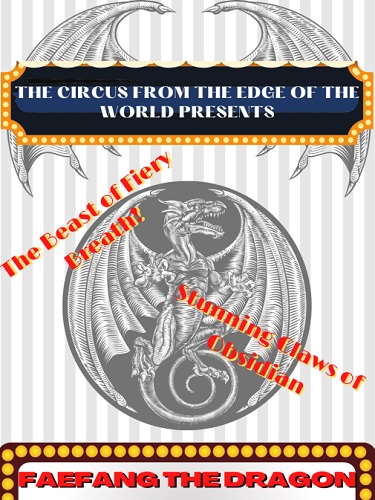 Faefang the Dragon Poster by Dani

Tweet
Join Tales of Fabulae: Retold Discord!
This setting uses trademarks and/or copyrights owned by Paizo Inc., which are used under Paizo's Community Use Policy. We are expressly prohibited from charging you to use or access this content. This setting is not published, endorsed, or specifically approved by Paizo Inc. For more information about Paizo's Community Use Policy, please visit paizo.com/communityuse. For more information about Paizo Inc. and Paizo products, please visit paizo.com.
Additional artwork is owned by their respective owners.
Cover image: GoldGreen Set - Organisation Cover

Now I'm curious. Do they have any competition?

Perhaps, though maybe less harsh competitors and more just "business partners" they make deals with to avoid setting up shop where their rival might be.