Qildor wears a red cloak with orange accents. He has silvery metallic scales outlining his face and fully covering his left arm. He has bright orange eyes that matches his tanned skin that’s pushing into being more orange. It contrasts nicely with his snow white hair.

Qildor was raised in the Kingdom of Kreyburg, specifically Virheller, where his parents moved from Efan Nalore. Neither poor nor rich, his family's lack of prestige left him subject to the draft during the Second War against Nallorian. He was assigned to the Wolves of Hadrian, the 61st Regiment, as a scout specialist and achieved the rank of Corporal. The regiment was sent to the Battle of Verdshale. Qildor experienced the grim realities of war that no young person is prepared for-death, gore, and brutality, to name a few. Zelthor, a silver dragon corrupted to serve Nallorian, was rumored to be somewhere on the island in reserve for the battle. They were sent to investigate the rumor, and he spotted him high in the sky, circling the coast. There was an argument over how to continue, but the Commander, Gran, demanded they attack. Zelthor swooped down after feeling the tickle of the regiments measly arrows striking his metal-like hide. Qildor was forced to watch as Zelthors' first strike slaughtered half of the force. Clearly ill equipped to handle this beast, and with five more attacks, the whole regiment was massacred, except for Qildor. Suffering serious wounds, but not enough to join his comrades. Zelthor began to scream, in what Qildor originally thought was a rage induced victory screech, but then saw the dragon's form begin to shimmer and transform right before him. He approached Qildor as a withered, depressed, unkempt human. With a rapid speech, Zelthor informed Qildor of the treacherous acts Nallorian had committed to corrupt Zelthor into his service. If Qildor entered a pact with him, he would grant him, his powers for freeing him from Nallorian's chains.   The two fled Verdshale-with Qildor deserting the army and his service-as Zelthor transformed back into his dragon form to continue wreaking havoc on the island, killing the rest of those he had once served with. While he felt little connection to the military service, this new mission inspired him. Qildor then travelled across Talaman in search of information regarding the Arcane and how Nallorian used it to corrupt Zelthor. Most of his time was spent in the Mageocracy of Yast and the Dolumen nations, where he questioned those wise in dragon lore and the Arcane, read what books he could find, and kept a low profile due to his recent desertion and delicate mission.   After a year of constant study, he travelled to a small island in The Sea of Shelde, where Zelthor held his lair. Outside the entrance, he performed the sacred ritual learned to remove Zelthor's corruption. He entered his lair and was once again greeted by Zelthor's human form, still somewhat haggard, but a smile spread across his lips showing a radiance he had not noticed when tbhey first met. After some celebration, he fulfilled his end of the bargain and Qildor felt a power surge through him. Zelthor invited him to stay until his death, even though the corruption had been removed, it had taken its toll on his body. Qildor learned of his history and the extent of his power and was gifted a spike from the dragons tail, which he now uses to cast his spells from since.   After burying Zelthor beneath his treasure, Qildor retreated to the Mageocracy of Yast. Even though he was a deserter, he became a Novice in the Magic Council. The libraries, odd jobs, and fellow mages have made the nuisance of bureaucracy worth its while. 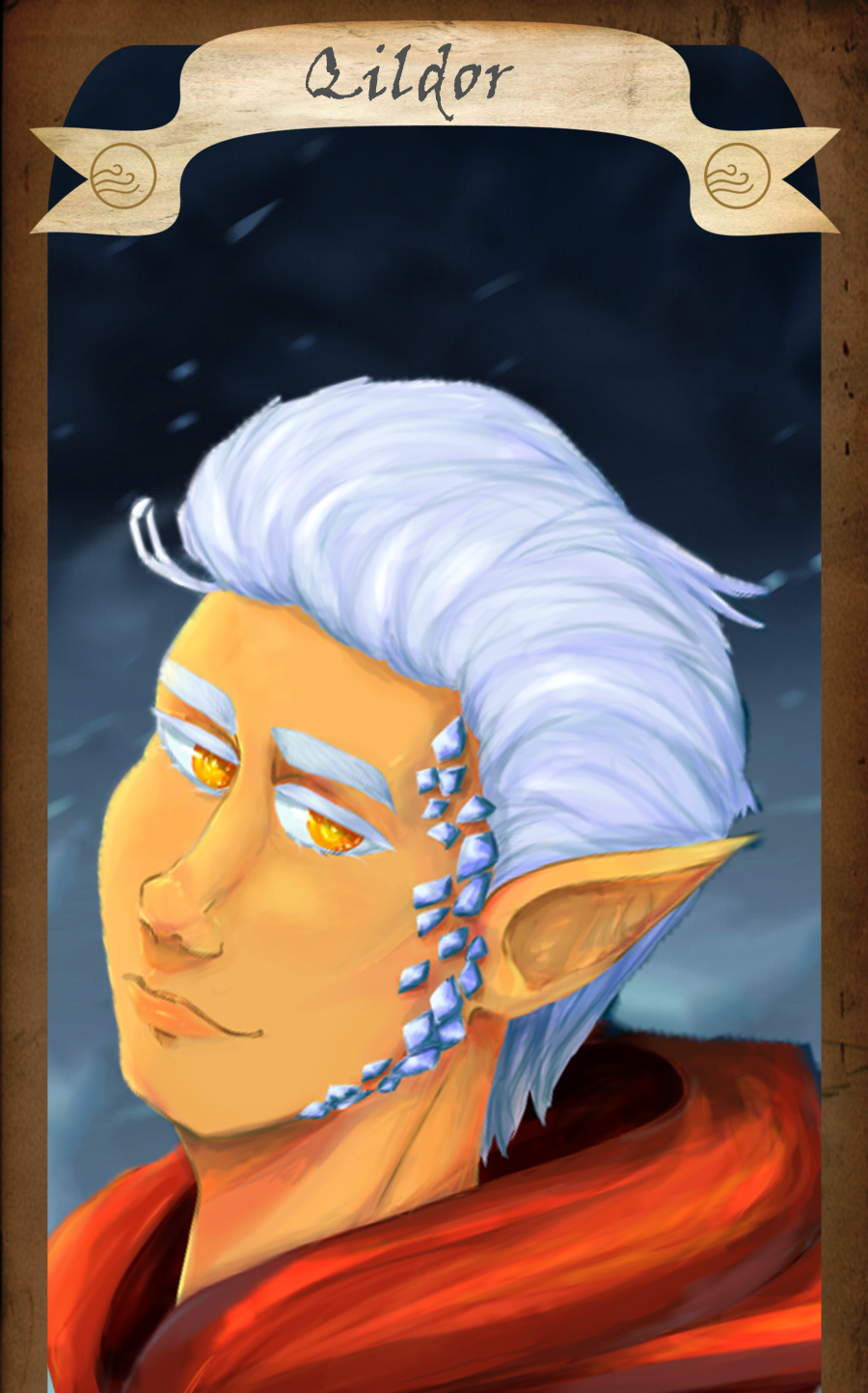