Alexandria was born in the Kingdom of Kreyburg in the capitol of Steelmoor. Alexandria was born into the royal family of Vernat to the Duke, Illota Vernat and his late wife, Lucia Vernat. As a young child, she was taught everything any princess would be taught, including music, reading and writing, theater, poetry, mathematics, and dance. Her father kept her hidden inside the castle, never allowing her to go outside the castle garden walls for he feared that his daughter would suffer the same fate as her mother and never wanted her to get hurt outside the castle. Although she was raised without a mother, she remained close with her father. For more personal female matters, she confided in a woman named Farah who served as the castle matron and stand-in mother for Lucia. They were very close.   As she got older over the years, she would witness Kreyburg go through many events, unfortunately most of these were terrible events that hurt many of the people there. The nobility were free of these struggles and she began to resent the life that she was born into, while those outside the walls were barely getting by. She resolved to fix the world one step at a time and began her efforts to make the world a better place. During this time her father, becoming more and more paranoid hired a group of mercenaries called the Elysium Guard to serve as personal guards for the family, as they had proved themselves over the years as reliable fighters. She was assigned one of their captains, a young man named Kailè Ò'Donahúe to watch over her. Apparently one of the sons of the head of the Elysium Guard, he followed her everywhere which irritated her at first. However, his gentle nature and his love of playing the lute helped her relax her guard, enough to the point that they became very close over the next three years.

Show Spoiler
Unfortunately, tragedy soon came however, on the nineteenth birthday of Princess Alexandria a small party was held for her. What was supposed to be a lovely evening turned into a horrific event that would become part of the The Assassination of the Vernat Dynasty. As she turned to her bodyguard Kailè to ask him join her on the dance floor, one of the minstrels playing drew a hidden hand crossbow from his viol and fired a bolt at Kailè. Seeing this danger, Alexandria threw herself in front of the bolt, saving Kailè at the cost of her own life...

Alexandria was taught in her castle home, to be an educated, proper young woman of royalty.

Alexandria was talented in the arts, specifically writing, and dance.

Alexandria is a member of the Vernat Dynasty, the former Royal Family of Kreyburg 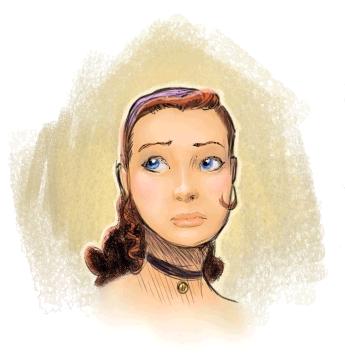