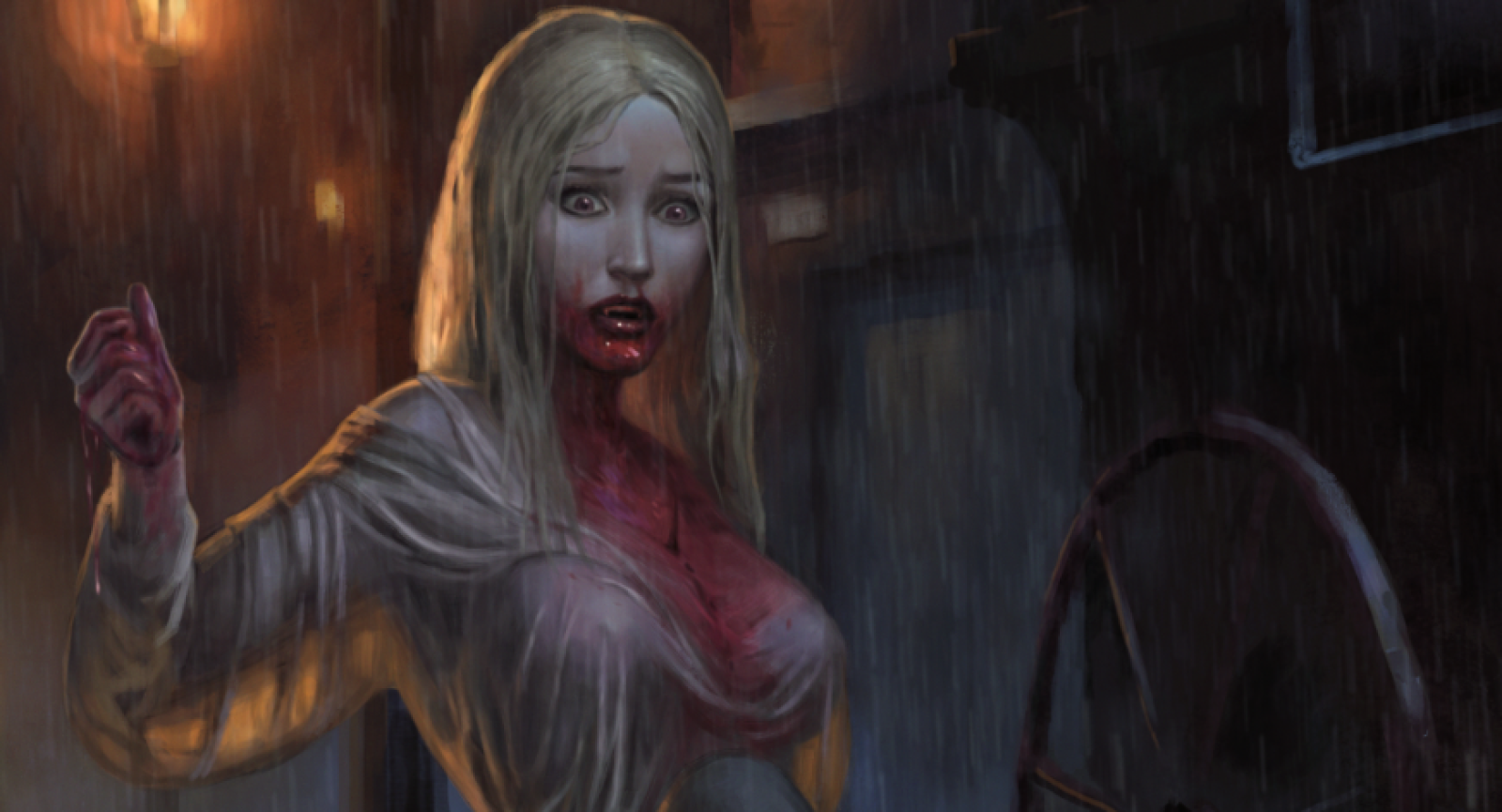 It hurts! I'm so hungry it hurts! It's like ice and fire... nails across a blackboard. It's an itch that won't stop and all I can think about is scratching it! Biting you! Killing you! Get away from me, please! Far away! No... wait. Maybe don't run just yet.
— Vinnic Tassoil's last words to his younger brother before losing the struggle against his hunger


As far as illnesses go Vampirism is a rather unique case because the longer the condition persists the less likely the afflicted is to want a cure. This fact alone has led many sages to debate the very nature of the disease and whether it is truly a sickness or instead perhaps some kind of grim blessing. After all, it seems to come with many perceived benefits: surviving one's first death, greatly enhanced physical characteristics, immunity to most other diseases and poisons, proof against aging and many more fantastic abilities as well. Some would even say that the cost paid for these miracles is a pittance: shunning daylight and the need to feed on the blood of the living. And, when described in such sterile terms it would be hard to disagree. It is also a lie.

In truth, vampirism is a dreadful curse that no soul should have to suffer. Those afflicted are assailed by constant urges to feed on living blood and denying those urges results in all manner of anguish. For those newly infected it is a stunning revelation; the level of intensity these urges can have. Many seek ways to end their existence or otherwise give in to the hunger to such a degree that hunters quickly follow the trail of bodies left in their wake and put them down. Those with a more sturdy grip on their willpower do survive the early days of infection and soon learn to manage the anguish. Yet, that is the best a vampire can ever hope for... to manage their pain. This disease is a torturous eternity that wracks the body and erodes the mind until centuries of murder have robbed the victim of all their humanity. Leaving behind a creature who's only true motivation is to feed the hungry inside.


Many alive today believe that Vampirism is a relatively new disease created by the members of the School of Necromacy during their exile to desert. While this is the extent most common people know of the disease more learned scholars debate whether the fault for its existence should lay with School of Necromancy or with the Kingdom of Melanthris who many believe used the wizards as scapegoats and unwitting pawns. No matter who the blame is laid upon both sides are wrong when it comes to true origin of Vampirism.

It would be more accurate to say that this curse has only made a recent resurgence. Its beginnings are as ancient as Necromancy itself and it predates all of the nations of Tairos by countless millennia. It was Zharkhaddos himself that discovered vampirism among the many other secrets of Undeath following his overthrow of the Golden God of Skyrir. Zharkhaddos' exact reason for choosing lichdom and other similar states of undeath for himself and his followers over vampirism isn't known for certainty but speculation suggests it had to do with enhancement of magical prowess over physical aesthetic that it provided. That being said, the old glyphs suggest a great many of those outside Zharkhaddos' inner circle did embrace the blood curse.

It is likely that vampires occupied every strata of Skyririan society and because of the easy in which vampirism is spread it is possible that a considerable cross section of the population carried the infection.

During the final, cataclysmic days of Skyrir the vampire population is likely the one that would have been hit the hardest. Due to the phototoxic reaction they have to daylight escape became more difficult and thus prevented most vampires from surviving the disaster. There are no known accounts of Skyririan strains of vampirism surviving into modern times, at least known that can be reliably corroborated.


Sporadic cases of afflictions and entities baring similarities to vampires can be found all throughout Tairos' history and there is little doubt that perhaps some of them were caused by a variation of vampirism. However; the disease did not return in its truest form until the conclusion of the Plague of Undeath.

While history isn't exactly transparent when it comes to who exactly is to blame for the Plague of Undeath it is clear that vampirism returned in full during this time. The College of Necromancy made use of many Ximezci relics from the Fang Crusades and among their vaults were secrets raided from the ruins of old Skyrir. They used much of what they found their in their efforts to create The Benediction of Odred, the ultimate in Healing and Curative Potions. However, the incident in Frial that caused the Plague of Undeath to begin was caused by the unforeseen mixing of many of Skyriran and Ximezci reagents during the warehouse infernos.

Among the many horrors spread by the plague cloud included vampirism. And, while the Plague was swiftly quelled by the efforts of The Grand Concordance of Tairos it did not stop the disease from taking root in distant and isolated places such as Frostmere, the elven peasant lands, the distant shores of Far Harbor, and even among the small villages that dotted the Balmoran Plain.

Vampirism is now rooted in Tairos but no where more deeply than in the frozen north. It is here among the icy crags and windswept wastes that the progenitor of modern vampirism is rumored to still dwell. Prince Vadin Sorolwyn and his bloodline dwell. The High Kings and Queens of Frostmere have made the eradication of vampirism one of the highest priorities for the kingdom but to date they have had no lasting success. 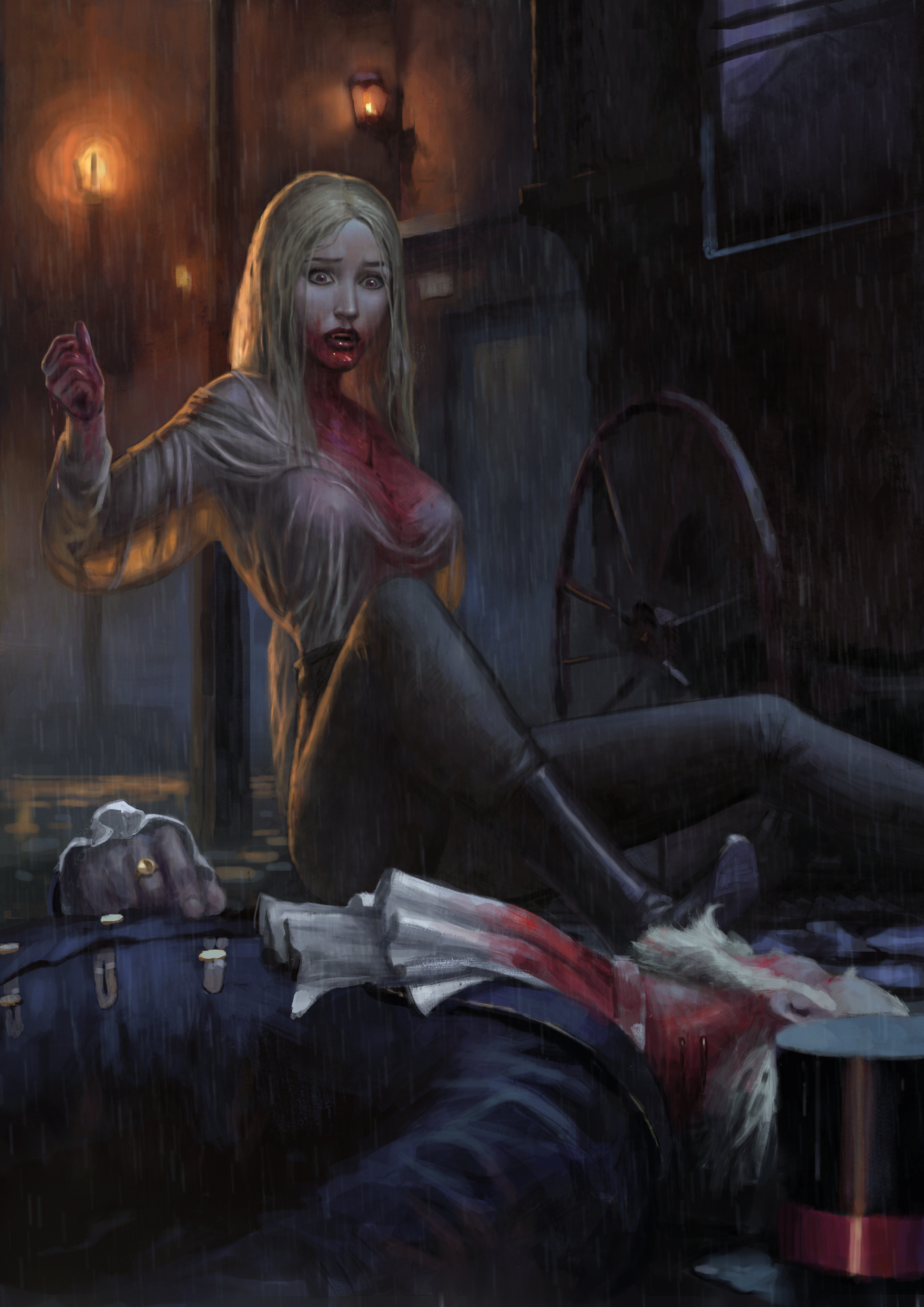 Transmission can come via several vectors though a direct exchange of blood fluid is the most common. Vampire blood has addictive and beneficial qualities to it that make consuming the substance hard to resist once one has tasted it. Healthy living subjects who drink it will find themselves imbued with increased physical attributes as well as a euphoric high. However, those who are near death who consume vampire blood will often experience painful spasms prior to death. Shortly thereafter the victim will rise as a true vampire.

Other means of transmission come in the form of massive transfusions of vampire blood into a living host. Exposure to the Wrack and to the Plague of Undeath seemed to be means of contracting the condition as well. There may be completely arcane means of creating the vampiric condition within a living target such as divine magic, necromantic ritual and similar efforts.

Phototoxicity, hungry for blood, painful effects of blood deprivation, enhanced physical characteristics, cessation of aging, growth of flesh-penetrating incisors which retract into the gum line when not in use, pale pallor, cessation of normal biological functions. Other symptoms may manifest that are common to specific variations of the disease carried by different bloodlines.

Very little study has been done on curing vampirism. It is certainly possible that if the infecting blood is removed from a living victim prior to their initial death than the turning process might be prevented and the victim may die without resurrecting. It is certainly possible that removing the blood while healing the victim might also result in the prevention of the disease taking root.

Nothing short of very powerful magic is believed to be able to restore a fully turned vampire to a living state.

There are no known cases of a victim being able to resist the effects of vampirism. The outcome in a victim already near death is 100% likely to result in a full turning. Healthy imbibers are also 100% likely to fall victim to the euphoric effects and physical enhancements.

Modern vampirism is rife with potential mutations as well. Due to the many variations in strain and the origin they owe to the Plague of Undeath the disease can be very unstable. Those infected with an unstable strain may instead evolve into a completely different type of Undead . They also might find the particular strain they carry so unstable that leads to crippling decay, physical abnormalities and agonizing sores.

There are no known inoculations or preventative measures that can be taken to vampirism from taking root once infected blood is in the system.

The disease is easiest spread in isolated settlements where it can move from victim to victim unnoticed should patient zero desire (or know how) to create more of their kind. Many young vampires are unaware of how their biology functions and how to turn those they feed on.
Type
Magical
Parent
Wrack
Origin
Magical
Cycle
Chronic, Acquired
Rarity
Extremely Rare
Magic

That my friend is an absolutely amazing piece of work - well done. I loved reading it.

Oh thanks as always! The Condition template is full of some great sections and suggestions that help a real lot. So thank YOU! 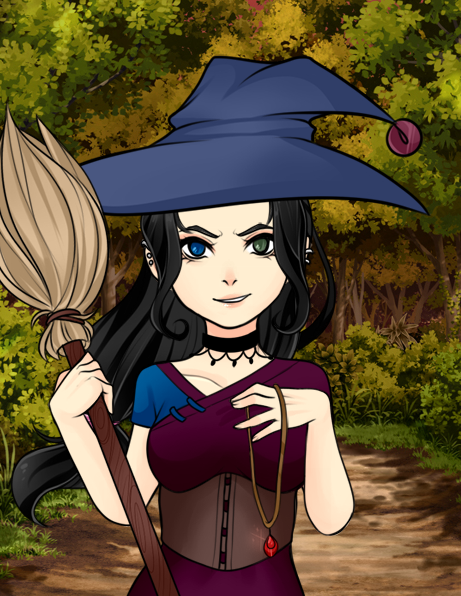 I really enjoyed reading this. I've been interested in vampires in fiction for a long time, and I like what you've done to be unique with the concept. Physical pain as a result of not drinking blood is not something commonly seen, unless you count intense hunger. Your grammatical structure is a bit shaky in a few places, but solid overall. A quick look over might be advised when you have the chance just to tidy those bits up, but they aren't critical and don't detract from the overall article, in my opinion. I like the idea of the current iteration of the curse being caused by magical mishap, since that's another thing you don't see very often with vampire origins. I'm curious, though, do living humans drink vampire blood or inject themselves with vampire blood to receive the reported high? It's a little unclear, as it's also stated that the curse is passed on via blood-transfusion. Or I may have misread something. Very good, overall. I certainly enjoyed reading it.

Thanks so much for the read thru. I'll make sure to clean that up as soon as I have a chance

Amazing article :) I'm curious about one thing though: if consuming the vampire blood by a normal human/other creature give some benefits - like the enhanced physical abilites, etc. are vampires in a way a target to one/s who WANT to drink THEIR blood or would they take victims and try turning them on purpose /to grow their numbers?/ Or are commonfolk known to run away and hide upon recognising someone as a vampire? I hope I'm phrasing this right >.<