He who has lost hope

An old soul inside Synthacrosia, Jaxton witnessed the Era of decline, before reappearing in the current Era. Has discovered the path to higher floors. Full of cold resentment at this world, he wants nothing more than to reach the top.   Through Locorin's Final Words , the party learned that Jaxton has been corrupted. He is the pawn of an entity known as the "Dark One", someone who has been attempting to wrestle control of Synthacrosia away from Locorin for nearly as long as it's existed.

Nothing is yet known of Jaxton's past before he entered the tower of souls. However, signs point to him being highly educated, based on his aptitude for high level magic.

From the moment Jaxton arrived in Synthacrosia, he has experienced hardship. Appearing in the Era of Decline, he finds this new world to be a dark and twisted place full of murder and deceit. Filled with the loss of what he had in his previous life, he is left only with anger.   Jaxton has never needed a job in Snythacrosia, instead focusing his energy working with those who resisted the clockwork processing wave.   As more and more of his cohort died, Jaxton put less trust in other souls, and became a sort of loner, working only on his own to escape the first floor.   Possibly because of his personal history, Jaxton was in a more vulnerable state of mind. This likely let the "Dark One" in, where whispers began slowly corrupting the arcanist.

Rediscovered knowledge of higher floors, after that knowledge had been erased in the early Era of Decline. Has been granted a boon from "The Dark One" in hopes of reaching the Starstone Architrave .

Jaxton watched as any friends and mentors he found within Sythnacrosia either died, or slowly went mad. His last remaining friends died with him on a journey to visit the 4 great stairs of the Floor of Strength, and he marked their deaths on his map, intending to return and honor them.   He then lost his map to a new group of highly skilled individuals that he had intended to rob and kill.

Full of anger and resentment, disillusioned of anything hopeful.

Smart, deceptive, and highly analytical. Has an aptitude for spellcasting. 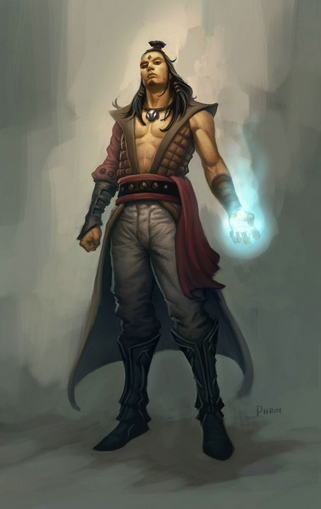 This world was started as a homebrew world for use with Paizo's Pathfinder, and as such, any references, systems, characters, locations, etc, that are specifically from Pathfinder, belong to Paizo. The rest of the world as it exists, the characters, locations, themes, histories, etc. belong to me, Stormbril.
Cover image: by Stormbril
Character Portrait image: by Phroilan Gardner