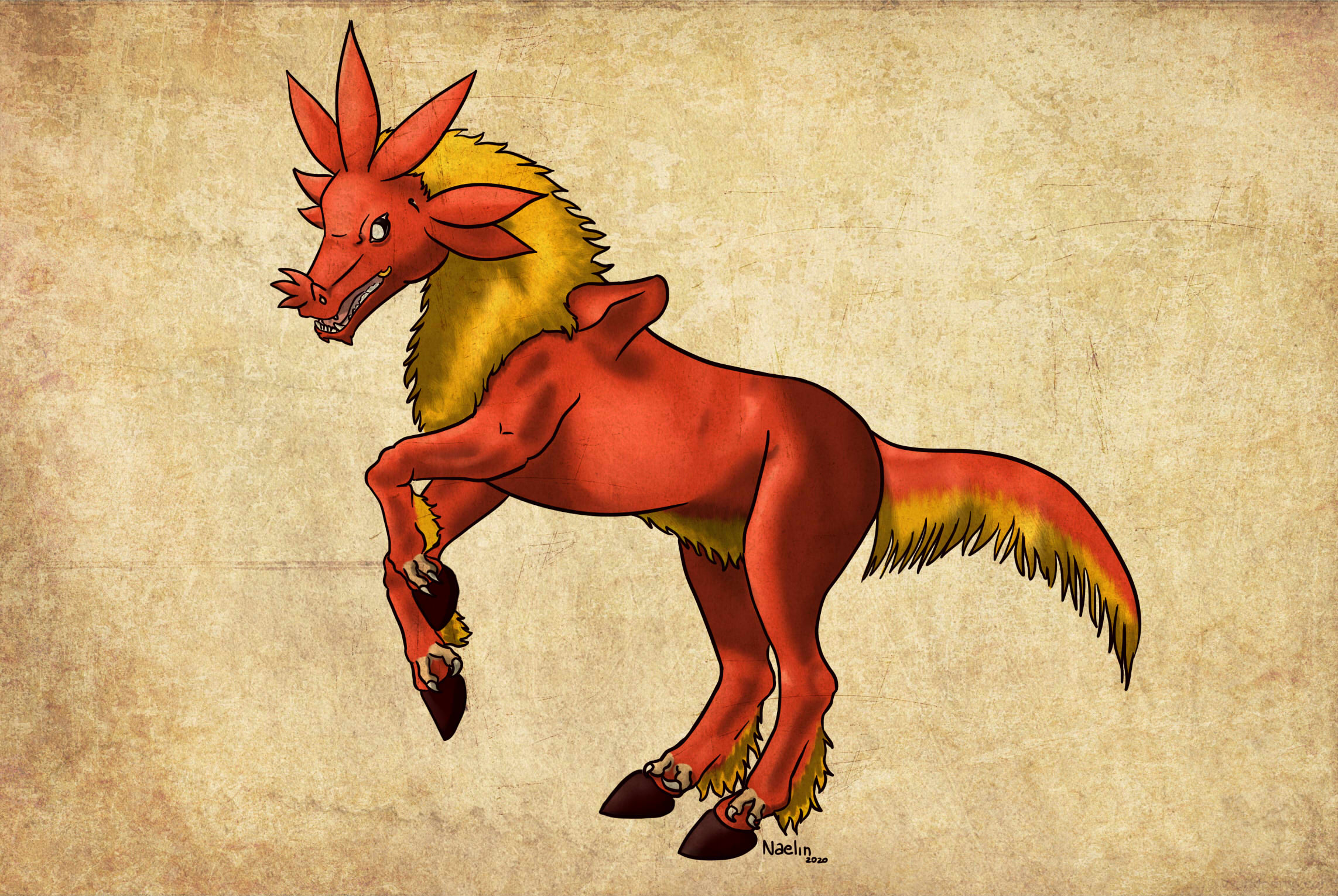 Hierdes are quadruped omnivores that stand at approximately 1.55cm tall to the withers. They are covered by short, bright red fur on most of the body, and by a dense mane of yellow or golden fur on the neck. They also have long golden fur on the back of their feet, as well as a straight line of long red hair with golden tips that starts at the base of the sternum and runs through the belly to meet with the tail.
Their feet end on a single hoof, surrounded by four clawed, naked fingers that don't seem to have a function and, just above their shoulderblades, they possess two big protrusions, with an slightly convex shape.
Their heads have an impressive look: Their eyes have white irises surrounded by a black sclera, looking inverted. They lack ears and their inner ear just ends in an opening at the sides of their head, and instead, they have seven fleshy, mobile appendages with an elongated drop shape, three at the top of their head and two at each side. Their nostrils open at two triangularly-shaped protrusions, which is matched by two triangular fleshy appendages at the chin. Between the nostrils, they have a three-pointed appendage that they can raise as a sign of aggression or excitement. At the corners of the mouth, they have two golden, curved growths, that look like rings pierced trough them.

The hierdes have symbiotic relationship with the sceapilion, a herd creature for which the hierdes act as guide, protector and leader.
One hierde (or sometimes two) will lead an entire group of sceapilions and protect them aggressively against predators and any other threat. In exchange, the hierde will kill and eat sceapilions occasionally, usually by culling those that get injured and would slow down the herd otherwise. The size and general wellbeing of their herd is also used by the hierde as a way to attract potential mates.   While hierdes are classified as a pactual species, it is highly unusual for them to make pacts outside of their own species and the nature of their relation to the sceapilions is believed to be instinctive.   During mating season, the hierdes will make their groups met with each other, and once they found a suitable partner, they will merge the herds for the duration of the mating period, and, in some cases, the male will stay over until the female gives birth, having the herds of sceapilion fused together. This is an stressful period for the sceapilions, but it does not usually cause major issues.

The hierdes are, unfortunately, at the brim of extintion. The last century had several waves of internal migration of societarians abandoning and then re-populating entire areas of the island, pushing the sceapilion herds to unknown and dangerous territories, and making the different herds get separated from each other, in some cases by cities filled with people.
As hierdes need to have the different sceapilion populations to meet to find themselves a mate, these physical separations made their reproduction extremely difficult, and the delving on more dangerous territories made them become stressed and at a disadvantage. Only a few hierdes are left, and these have seem to start to find themselves forced to adapt to survive. 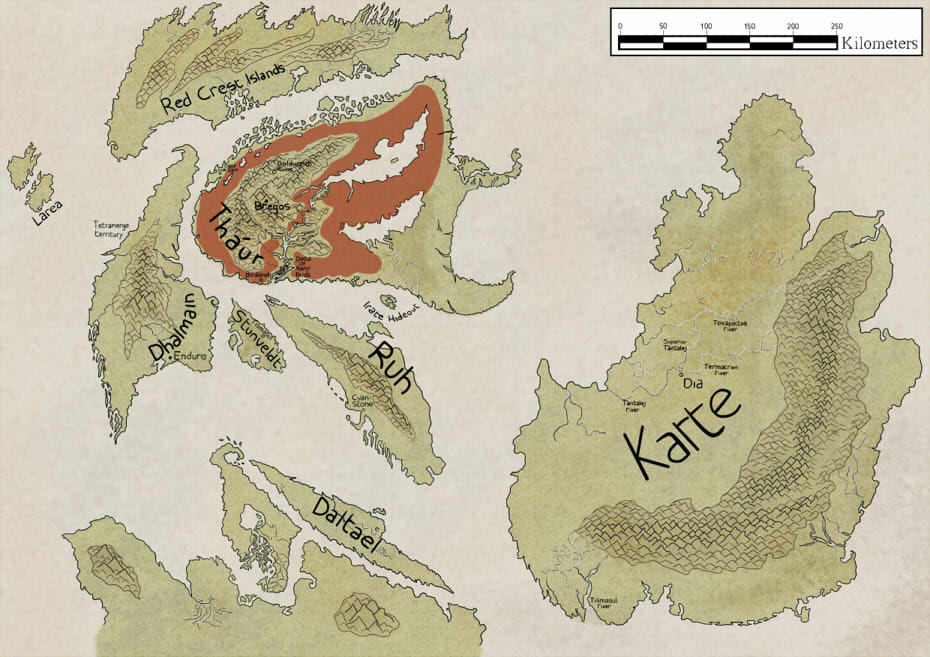 Sightings of the Alzufhar and Sceapilions species in the archipelago by Naelin
Classification
Pactual Species
Lifespan
45 years
Average Height
1.55m to the withers
Average Weight
450kg
Geographic Distribution
Some of the hierdes have taken the issue of the sceapilion decline and the impact to them to their own hooves, abandoning the herds to their luck and seeking a better one for themselves elsewhere, some by hunting, some by starting to manage herds in pairs, and, in the particular case of the most famous hierde, walking right into a societarian city and making a pact with the newly risen King of Thaur, becoming the royal mount.

A famous hierde known from leaving his species' lifestyle behind and joining the ranks of the Kingdom of Thaur by making a pact directly to the king.

All of the text and art of Symbols of Power, including the CSS theme, have been created by David Cutuli (Naelin) unless otherwise specified.
All of the art and content attributed to the pseudonyms of "Welkinal", "Danae" or "Veld" have been created by David Cutuli (Naelin).
SoP theme song composed and interpreted by Lu Cutuli. | SoP logo and Out of Universe logo created by TJ Trewin. | Open paper texture by Markus Spiske.
Huge thanks to TJ Trewin for his help with SoP's css theme design.
Cover image: Hierde and Sceapilion
Article template
Species
World
Symbols of Power
Category
Pactual Species in Creatures
Author
Naelin
Publication Date
26 Dec, 2020
Creation Date
2 Dec, 2020
Last Update Date
14 Jan, 2023
Visibility
Public
Views
335
Favorites
13
Comments
2
Tags
English Species WE2020

Noooo, I was so sad to read that they were on the brim of extinction... Apart from that devastating fact, the species is really awesome looking!!

Thank you Badger <3 Fun fact, I created this species at least 13 years ago :D

I love their relationship with the sceapilion, especially the fact they both protect them and cull them. :)

Thank you Emy! The smiley face after the "and cull them" made me laugh a bit hahaha