Leader of the Raised Bakers Resistance

"The people of Karte are looking to the past trying to find light in the darkness, trying to convince themselves that this fight is not worth fighting.
We want to find something that makes us think that it is better to give up, to stop all of the death and suffering and go back to the time before all this.
And we can't find it. We must continue fighting."
— Ararak

Born in 2979 E.Alz on a tiny town south of the City of Dia, capital of Karte, Ararak is a scaly of basilisk phenotype and neutral gender.
When they were 11 years old, Ararak and their family moved to the capital, where their father got a job in an important bakery. Once Ararak was old enough to work, they started helping their father in the bakery, and eventually learned the trade and started working as one of the bakers.
Ararak saw their quality of life decrease as they grew, as the economy of the country kept crumbling in front of their eyes while the furry aristocracy in charge of the kingdom blamed the scalies, calling them lazy and illiterate.


The Decline and Crash of Karte 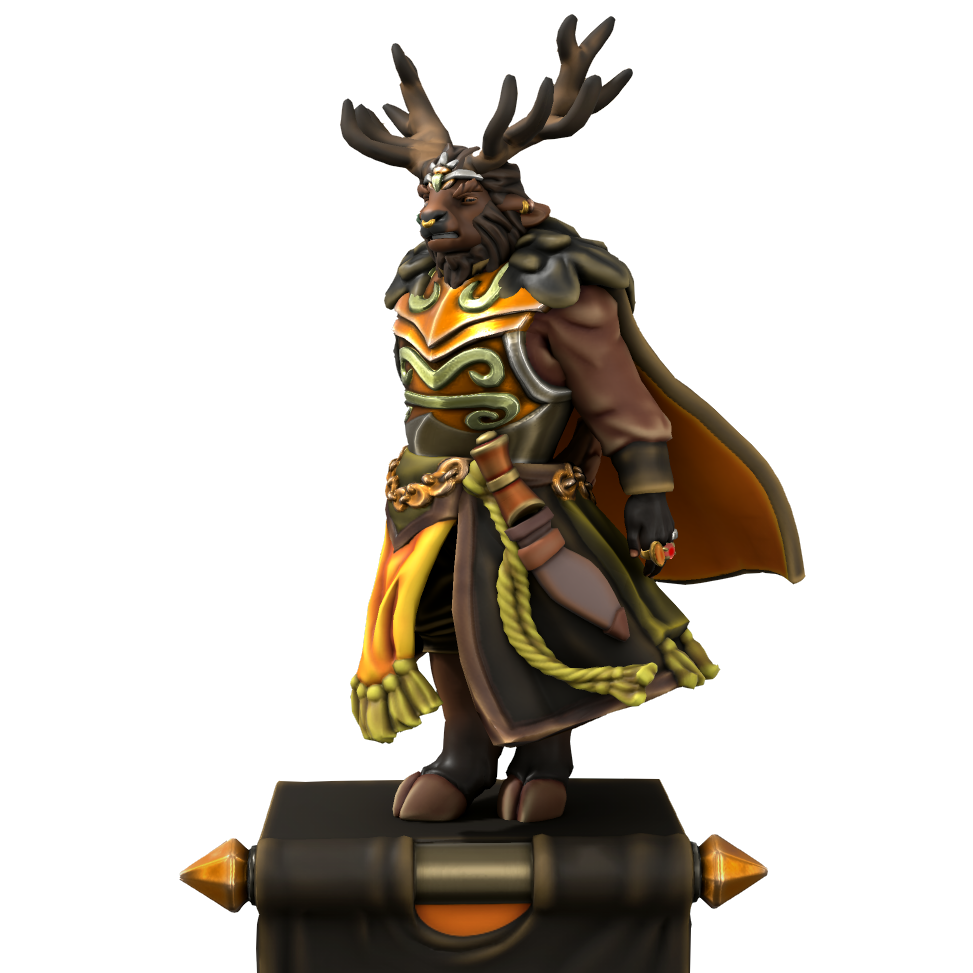 King Rastapuj by Naelin through Heroforge
Ararak got quickly involved with the struggles of the bakery they worked at and of the families they worked with.   As the years went by, the Kartian king, Rastapuj, passed several laws adding successive taxes and restrictions on the acquisition of raw materials and many members of the aristocracy got their hands on the production of them raising the prices as well.   The working conditions for the most basic and important professions on the island worsened, and Ararak saw every day more and more families having to choose carefully what to buy to be able to feed their families.   On the year 3006 E.Alz, while Ararak was 27 years old, Rastapuj's son was brutally killed during a pirate invasion on Karte's capital. Ararak and their family survived the attack, but the king was left completely devastated, and his mental stability disappeared overnight. On a short amount of time, the country became a chaotic mess of economic crisis, racism and protests. 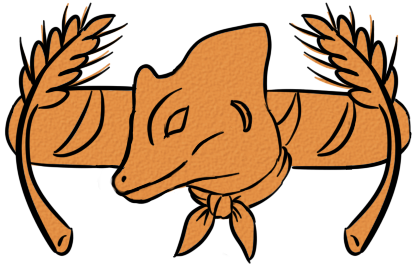 Logo of the Raised Bakers Resistance by Naelin
In no time, Ararak started raising their voice among the bakers, and spreading ideas of unity among workers and political resistance. While still being just one of the employees, they managed to organize all of the workers and owners of the business to support each other and their neighbours. In no time, the ideas started spreading to other bakeries, to the merchants, to the customers and to all the common folk around them.   Armed with sharp words and an incredible ability to stir up the souls of whoever listened to them, Ararak quickly became a small public figure and got to represent a new socio-political organization, a guild of bakers called the Raised Bakers Resistance.
The Raised Bakers united the workers of several bakeries and related trades under the immediate goals of getting better working conditions for bakers and food providers, lowering taxes and giving more power to the workers, and the long term dream of a monarchy-free Karte, and a horizontal economic and political structure, with no powerful rulers strangling the people that put the food on the tables.

As Ararak rose the bakers and the people around them, other groups were also getting formed all around Karte that, while they all had the intent put on demoting Rastapuj, they had conflicting ideas about what should come after, including on their interest (or lack thereof) on going further to abolish the monarchy, the aristocracy, or the entire political system.   Tension started growing between the different guilds, political groups and slowly forming guerrillas, and Ararak quickly saw the potential for disaster brewing. The baker decided to cut the problem from its root and started making dozen of public appearances in as many and as varied locations as they were able to, speaking loudly and clearly about union, about the Kartian folk's shared goals and about compromise.
On an incredibly short span of time, Ararak became liked in most revolutionary circles and started assigning objectives to the guerrillas and moving the general population towards the uprising.   On the 5th day of Swimming, 3010 E.Alz, the first many serious conflicts set the climate of a civil war as two armed groups infiltrated Dia's barracks, stole several caches of weapons and then liberated many political prisoners from the dungeons, leaving 5 casualties in the process.

The easternmost nation of the archipelago, trying to survive in the middle of a raging civil war.

After centuries of being treated as an inferior race, the scalies of Karte are finally fighting back.

The Raised Bakers Resistance is inspired by a real life group from my country's history. Read about the real anarchist bakers here! 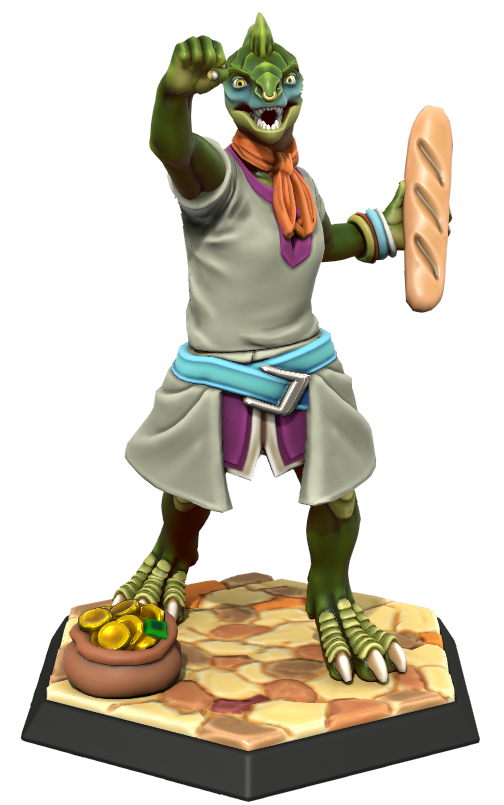 Ararak delivers a speech by Naelin through Hero Forge
As the fight between the people and the military became open and violent, Ararak turned into a public figure, continuing their public speeches to the Kartians, and had to go into hiding, travelling from one place to another using safe-conducts provisioned by the other revolutionaries, as the military started going after their head.
Their fame rose fast: They turned into a living legend and the most wanted person on the whole island, appearing suddenly in the middle of a crowd of civilians to deliver their messages of hope and endurance and then disappearing again, leaving only a trail of hope and strength on the people.   The Raised Bakers had to start moving more autonomously, as Ararak focused on helping the country's groups organize their efforts, gather information and coordinate with each other. The baker became, in the eyes of the monarchy, a sort of immaterial force only traceable by how all of their efforts to destabilize the subversive groups seemingly lost all effect in specific areas.   The face of the basilisk and the logo of the Raised Bakers started being painted in walls and banners all around Karte, as the civilians kept pushing for their rights.

Things seemed to have picked up their pace until the year 6 E.Ru. Rastapuj, cornered, continues going back and forth between good and terrible decisions, and, after 11 years of turmoil, he is getting more and more on the losing side. Many members of the aristocracy have picked up their riches and fled the country.

Over the last year, however, little has been seen or heard from the revolutionaries or from their leader. All of the sudden, protests seemed to have become peaceful, almost a mockup of what they used to be. Months have passed since Ararak made their last known public appearance. No buildings have been raided by organized groups. The population and the military are restless, searching every corner for the people's hero to catch and execute them, without any luck or lead. They are brewing something in the shadows, they know that, and it terrifies them.
People of Karte

I love the mini with the baguette, I've seen it between the objects on heroforge and I thought "Would anyone even use that item in a miniature?" and now you showed me how narrow minded my position was!

Thank you Dani! It took some time to find a source about the anarchist bakers in English hahaha, it is, unfortunately, not a very well known story. But my country's pastries are still named after their efforts!

Ararak is my favourite and I would die for them. I love the HeroForge mini with the baguette. <3 I'm really intrigued for the rest of their story in the future...