House Attio would probably never be mentioned in this context, were it not for a handful of colorful personalities. The heads of their house have always been loyal to House Kohinoor, and the other mem- bers seem generally determined to avoid positions of responsibility. Perhaps this is precisely why the outwardly affable and popular Herakleo is secretly drinking himself to death?

The family’s barony may be beautiful with its rolling green hills, but though the stretch of land along the Veloma Valley yields good harvests, their lands generate little income. In addition, most of House Attio’s coffers were recently spent as the Baroness’ payment to the Free League’s sells- words. No, House Attio cannot be considered one of Ambria’s economic giants, especially after the loans which Baron Valero will have to take out in order to equip his troops for the upcoming war against the Sovereign’s Oath.

Aside from the much-discussed Valero and Herela, the beloved drunk of a Key Master, and the con- stantly intoxicated troublemaker and war hero Serex in Thistle Hold, there is really just one notable person in the family’s history. But she is famous in a completely different, overwhelmingly positive way: the Lightbringer Ofelya who was sainted for having died the moment she, filled by the holy light of Prios, burned the gates of the Dark Lords’ stronghold to ashes.

The members of House Attio are so busy with their own problems that they never have time for plots or conspiracies. They are loyal to the Crown, and that is the only alliance they are interested in. The question is how long the Queen will put up with their internal squabbles – there are plenty of other prominent people in Ambria, many of whom deserve to be elevated to nobility... 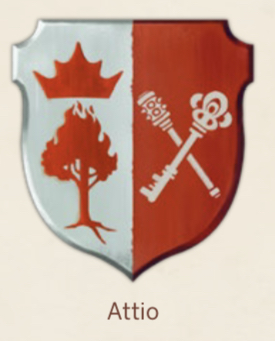