The feared Captain of Heaven's Fall started off quietly, then rose to power with a red splash.

Nubia didn't become captain of Heaven's Fall by accident. It was the culmination of years of hard work and stone cold patience. Before Nubia began leading Heaven's Fall, she was in a small-time pirate crew living off the scraps of bigger crews. The Scrap Dogs.

Through a turn of events, Nubia ended up in a pirate crew at the age of 11. Not really uncommon for 'Nest kids like her who couldn't stand authority. Her parent said to her that if she didn't like it, she could leave. So that's what she did. After a short journey, she ended up at Port Royal, the pirate hub of Grimnest. One thing led to another and she landed herself aboard a tiny ship helmed by an even tinier crew, The Scrap Dogs. Their plan was simple, rob the boats and skiffs fleeing the larger boarding parties. 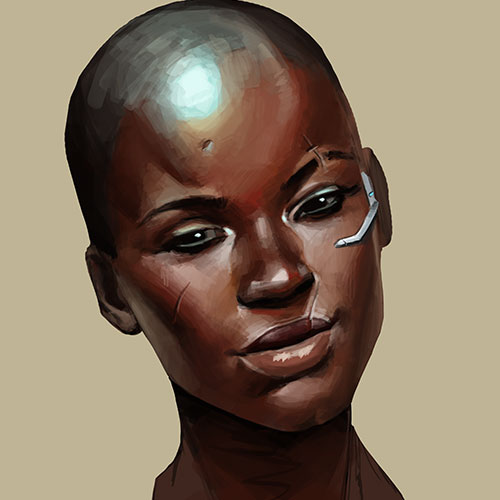 It was a great plan, right up until the point it wasn't. One not so faithful evening, they strayed too close to the phishing area of a much larger crew, Heaven's Fall . Unable to flee fast enough in an ironic twist that didn't escape Nubia, they themselves were boarded. With hands on their weapons, they waited to see what the Fallen had in mind. The choice the captain had barked at them was simple; join Heaven's Fall or stay with the sinking boat. To Nubia, it was an easy choice, and she crossed the line without a moment's hesitation. The other Scrap Dogs, perhaps incensed by a feeling of betrayal, choose otherwise. Nubia simply shook her head in dismay as they were slaughtered with little fanfare by the Fallen brigaders.

"...now I never cared much for ol' Columbus. He was real sard, but he keep things going alright. So we didn't say nothing about what he did on the side. But oh lil'Nub kept pointing all the shit Columbus was fucking up. And boy it just got us all thinking, maybe it ain't so alright? We should be getting a bigger share, all the boys have said in the cabin, but not aloud. It was only a matter of time before Ol whitebeard noticed that all the crew wasn't agreeing with him no more. But to think he'd challenge her to duel? Nawww man, who would have guessed that? I mean Capn' Columbus was in his 40's, no spring chicken, but he had that grown man strength ya know? Nubia at the time was...what..like 13 then I think?

I'll always remember this man. That day, I don't think any of us will forget that day. He had barked out, OI well if you thinks you know so much then we have a little duel to see who gets run this here SHIP!" And he's just leaning over her trying his best impression to look like a giant dick. Nub, she just stared up at him with just no emotion. I'll tell ya, that girl was always kinda creepy, bald hair and quiet and all. But like nothing scary right? Well, so this big ol grown ass man is staring down at this little girl. I just want you to imagine this picture, ok? So she just looks up and calmly goes, When?

The way she said it, a bunch of us just stopped. Like Ken and Bo and I just stopped. I've heard that kind of tone before. Real stonecold type fuckers. Some of the other dudes laugh, and I think that's what made Cap just kinda blow it off. Cause he laughs and goes "Any time you wanna go cupcake we can do this right no---. That's it. That's the last thing he says. Cause she just whips her arm around, and I swear to god it was the fastest thing I'd ever seen. Cause he's all reaching down to put a hand on his cutlass and then blood is just spraying everywhere. Shit, I already realized what happened cause I say the short blade in her hand. With straight up one move she slit Capt's neck. I mean SURGICAL. He falls down gurgling and shit, just bleeding all over the place.

This girl just turns her head around, bald head and face all gleaming with blood. She didn't say a fucking word, but that look. Just a look. Now, I'm not afraid of much in this world but my momma and Raksha, but that shit...that shit? Man, I'm not gonna lie I blurted out,

"What we doing now boss."

And I'll tell you, not a damn dude in there said anything differently."

The fledgling buccaneer had heard prominent tales about Heaven's Fall before. She had secretly been looking forward to joining a crew with more experience and more to offer her for some time now. This wasn't the way she had envisioned it, but it worked for her. When she joined, however, she found herself immediately underwhelmed by the captain. Captain Columbus was a loud, boisterous man who did as he wanted with little regard for the consequences. To Nubia, it became clear that the clout of the flag kept the crew in business and not the leadership. As time grew on her ill will toward him grew in quiet discontent.

She initially tried pointing out his misgivings at every possible opportunity. While Columbus often tuned her out, the crew wasn't so deaf. She kept noting thing after thing and not before too long, the shocked looks of her crew mates turned into agreeing nods. It was that behavior that finally caught the old dog's ears. By now, the captain was threatened. It was one thing for the 13-year-old rookie to run her mouth, but she was inciting the crew now and that always carried dangerous implications aboard a ship. Columbus however, made the mistake of doing the one thing everyone keeps doing, underestimating this single girl. So he did the one thing he knew she couldn't compete in, he challenged the small girl to a duel.

Columbus himself had often preached to the men about never underestimating an opponent. It's only ironic that that lesson was his downfall. The duel was his last decision as captain, as not only did Nubia beat him handly, but she was not one to take prisoners. Slicing his neck open, killing him on the spot, Nubia instantly earned the respect of the increasing listless crew.

With Nubia as Captain now, the small time crew continually punched above their weight as they carved out a territory and seized larger ships with each raid. Before long, her crew included a dozen ships and over 100 bloodthirsty, greedy pirates. On top of that she's grown a loyal crew by hitting the richest ships and offering any servants, slaves or malcontents work and safe passage. With Nubia at the helm, the seas of Grimnest and more, belong to black and white flag of Heaven's Fall. 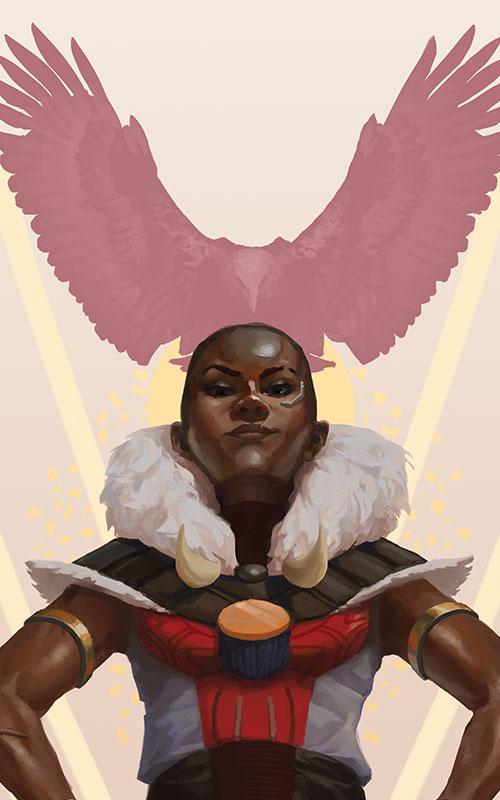 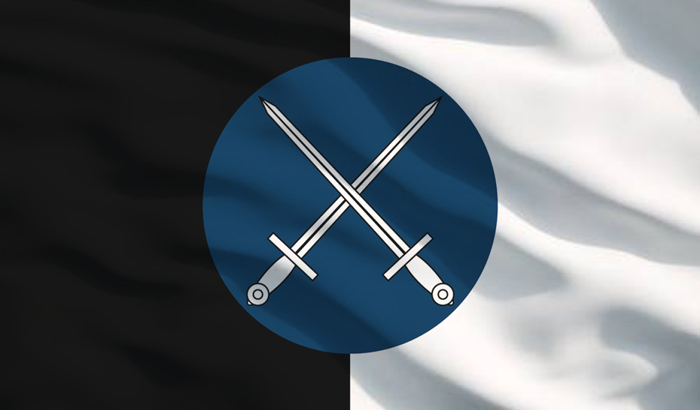 The largest pirate organization on Tikor and the defactor rulers of The Grand Divide.

The Tale of the First Pirate Lafitte

The legend of Grimnest's first pirate and revolutionary, Lafitte.

The music is totally optional, but I wanted to include a bit of music that I thought not only fit the character, but the character would listen to. I imagine this Nubia with her trademark bald head slightly nodding to the music, earbuds in and ignoring the world.   I feel like her character would enjoy crisp hitting lyrics and pounding bass. She makes a slight sneer as she raps along with Killer Mike.

Thanks! I had a ton of fun writing it :)

Hell yeah! This character is so vibrant I was scared of her for a minute there

Thanks! I had a lot of fun writing her!

I can't tell you enough how much I absolutely adore her! Definitely throwing a follow your way!

Amazing detail and a nic estructure / layout. I sometimes feel like the Narrator outside of the quotes is biased as well - from which view is the article written?

Glad you noticed. Every article is written slight biased towards that nation. As it unfolds you'll notice contradictions between the same events from different sides :)

Excuse me a moment while I go have nightmares about this badass.

Its only a nightmare if you don't like it "D

She sounds like a bad-ass! And a really good picture. Good use of the layout elements, easy to ready and not too long. Well done! :D

This is really a wonderfully crafted article. Nice job! Did you do the CSS yourself?

Noooo. This is the Star Anvil theme and I modified it in spots! But glad you liked the article :)

Scary. O_o Good use of pictures here, and having the crewmate tell the story of that duel just made it all the more... *there*. I can't think of the right word off the top of my head. But very well done.

Well this is a supremely well crafted article from both a textual and formatting point of view. Just brilliant!