Compact and brutally strong, few can escape its deadly grip


A brain-eating freak of nature, the Nandi Bear sits above even the Atlas Bear as the most dangerous bear in Garuda.

The Nandi bear is a genetic anomaly among bear species. So far the best that can glean from their corpses is that they are some sort of freakish offshoot of the giant Atlas Bear. Yet where its larger predecessor grew to use its size to reach hidden food in the forest, the Nandi Bear has evolved differently. The hyper-muscular bear has instead changed toward an alpha predator that feeds upon any animals within its territory. It's favorite meal? The soft fresh brains of its victims.

The front legs of the Nandi Bear are abnormally muscular, leading the bear to walk around in an almost primate-like manner. Don't let the awkward movement foul you though, the Nandi is capable of sprinting on all four legs or upright on two legs. The upright position is the terrifying indicator that the bear is about to strike. Upon catching its prey the bear uses its powerful upper arms to crack the braincase open like a soft melon. The Nandi Bear then consumes the soft brain matter, its main source of nourishment.

Its size and hunting style lends this freakish animal to hunt solo. It's unknown as to how many of these bears are in the wild. At least a handful of these hulking bears living in the fringes of the Adras Mountains. When spotted they are always seen alone, which is a bit of a relief to locals. The threat one Nandi Bear faces is enough to frighten even the most stoic. Its ghoulish appetite also suggests that the bear fends for itself. Stories abound of the bear being found devouring its meal on sight to completion. No compunction to drag the kill off to share with others.

The threat this gear poses cannot be understated. The Nandi Bear feeds on one thing, and one alone. Brains. The brains of any creature within its range, and the grey matter eating ursine is willing to travel great distances to feed. With the bear willing to squeeze through windows to devour babies or slaughter entire herds of cattle, the predator is kill on sight. Even the more nature loving Karu have little compunction of killing the foul beast where it stands. The muscular predator has truly no allies in life.

Large, extremely muscular frame with highly developed front legs. This leads the beast to walk around with a permeant hump. Akin to something like a primate. Flat face, with a stubby nose. This shape allows the bear to get within the brain cavity and lick it clean.

The Nandi Bear enjoys the remote forest area around the Adras Mountains . The aggressive bear uses this dense and often treacherous landscape to conceal its presence as it stalks prey. Stories abound of travelers being ambushed by the muscular bear as it leaps from ravines or down from cliffs.

Very little is known about the dietary needs of the Nandi Bear. The hostile nature of the animal makes it extremely hard to observe or track in nature. What is known its is clear affinity and need to consume brain matter. The type or size of animal does not matter, though it seems the bear needs to consume and an average of a pound of brains a day.

None. Due to what is assumed to be small numbers, they are generally solo creatures. Though they will sometimes roam as a small family unit of mother, father and cub.

Spotted in the Ardas Mountains

The Nandi bear has exceptionally good hearing. Mountain life and the need to hunt prey has taught this beast the value of waiting and listening. Its sense of smell is second out to its auditory skills. The ursine is capable of smelling prey within a mile. This combined with its topnotch hearing and you have a predator that is almost impossible to capture. As well you have a predator that is capable of hunting in total darkness for almost 3 kilometers. 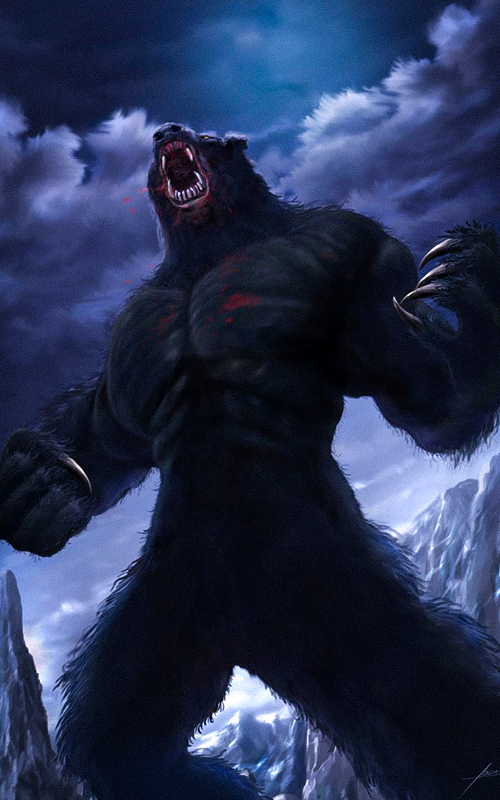 Awesome article! Please keep writing. You are an inspiration. I absolutely love your world. Just threw my lot in with you on kickstarter. Wanted to point out a typo since I know you are doing this professionally. You wrote gear instead of bear in the first sentence of the MENACE TO SOCIETY section. I look forward to more late nights reading your wonderful creations!