The Blue Crystal That Fuels the World


The azure colored mineral quartz is found along the shores of Tikor and deep under the waters of the Divide. It's refinement and use is a major source of the economy as well as powering a majority of the major cities.

The deep blue crystal is found along the shores of Tikor and deep under the waters of the Divide. Legends say that the crystals are manifestations of Etherforce, byproducts of the energy that flows through all living creatures. Others say its Ishavana's spirit in physical form. Either way to this day, there is very little known about Azurean's origins or how they form underground. The crystal itself was discovered long before even the Divine Wars over 4000 years ago. The stone can be seen lighting up the waters along shallow parts of the The Great Divide coastline. Its prominence and seeming abundance, inevitably enticed humanity to find out what this shining crystal was. However, when the first humans began to attempt to harvest the crystal, they quickly found there was a problem.

Pure raw azurean emits a steady short-range burst of radiation. When exposed to it for long periods of time it is extremely fatal. The long pulses of radiation from the crystal begin to eat away at the user's very DNA. Handling for longer than a few minutes can cause various illnesses from hyper tumors, aggressive cancer, severe dementia. The rate of immediate death drastically increases after hitting the 10-minute mark. To complicate matters, the radiation the ore emits makes the use of machinery extremely hard. So often the work of azurean mining comes down to human hands. The value of Azurean was only offset by the complications of mining and forging it.

Almost accidentally, it was discovered that some people were capable of handling azurean for indefinite lengths of time. Early into the Divine Era, a rare genetic condition was discovered. Called Cobalt Mutation, it allows a human to not only handle the blue tinted crystal but manipulate it like clay. Over time people with this mutation would become known as Crystal Priest. Every nation and culture in Tikor now test the young early on to see if they have the mutated gene. Centuries of this has lead to an over an increase in Crystal Priest and with it the widespread use of Azurean.

One of its main source of popularity comes from its ability to act as an independent power source. Most of the world is powered via fire, massive rituals or provided by a deity. This is a reliable, efficient and stable way to generate energy for any parties able to find the crystal. Azurean grows in submerged clusters that range from dozens to hundreds of individual crystals. The further into the deep water, the more the increase in yield is. This was one of the first main reasons for piracy, the theft of transported azurean.

Azure has a deep hue of blue that seems to pulsate ever so slightly. Even when raw, the edges are smooth and polished. When initially found the crystal does not grow uniform, with a cluster of Azure looking like some sort of crystal shrub.

The beautiful color and smoothness of the crystal are ultimately what has lead to the most number of fatalities. Many unwary adventures have come across the gorgeous blue crystals and mistaken it as wearable treasure. Only to die suddenly and mysteriously days later. Many scholars believe early Azure was responsible for many myths of curses. The beauty of the blue crystal alluring man to its own death.

Azurean is used as a base element in many experiments. Its ability to resonance frequencies and radiation make it an extremely unique crystal despite its seeming abundance. Modern construction machinery has largely grown around the ability to adapt Azurean to the job.

Its most common uses are in heavy machinery that's used in construction in the larger countries such as Garuda, Vinyata and Hawklore.   In recent years, a smaller azure engine has been produced to use for transportation. 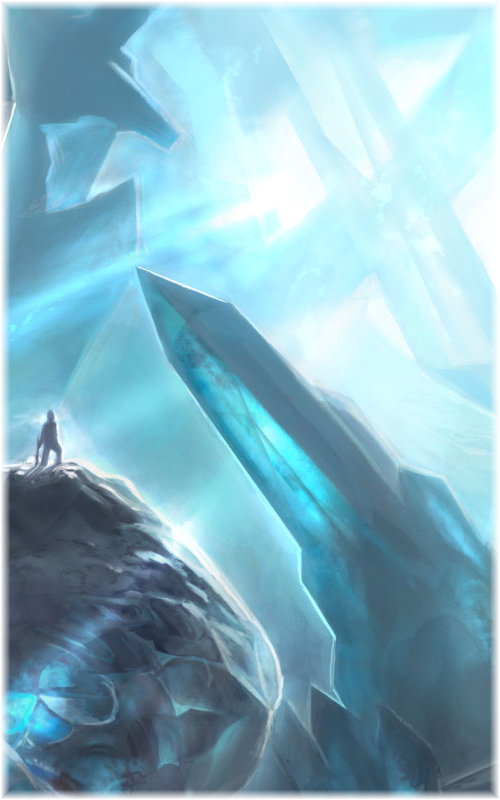 An impressive article overall, especially with the images. Did you draw them?

Oh no, I just write! I'm actually trying to find the artist of one of these to tag them with correct credit.

Cool! I like the detail of how it integrates into the world, especially with those who're immune to its side effects

Thanks! I'll be writing more about Crystal Priest this week.

The layout and artwork are so awesome! I love how it has influenced history and myths in the world, as well as the culture! Very well done :>

Thank you! Can't take credit for the artwork, I just found it.